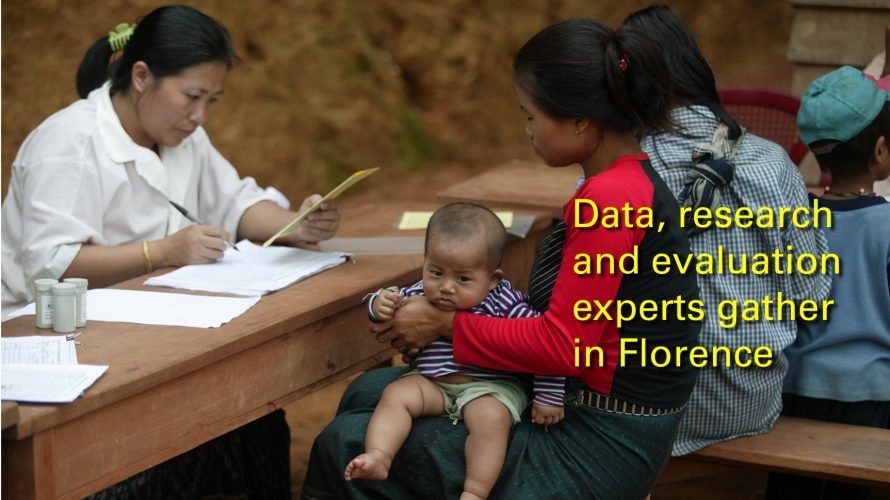 Experts in research, data and monitoring descended on Florence this month to discuss their increasingly important role in addressing the latest challenges facing children’s rights.

More than 80 UNICEF staff from over 40 countries attended the annual DREAM (Data, Research, Evaluation and Monitoring) meeting June 6-10 on how to generate better and more useful evidence for children’s rights and how to ensure that evidence is taken up and has an impact at the level of policy.

“UNICEF is taking its evidence role very seriously, refocusing and emphasising how to provide quality evidence for and about children so that it can be used by governments and other important stakeholders,” said Nikola Balvin, a knowledge management specialist at UNICEF’s Office of Research – Innocenti.

“We do that mainly in low and middle income countries but we recognise that as part of the universal agenda of the SDG (Sustainable Development Goals) era, we also need to advocate for the rights of children in high income countries.”

“We need to be realistic that no matter how good the quality of evidence, it is just one of a myriad of factors that are likely to impact upon decision-making.

“That is not to say that we should not try.  We still need to start with good quality evidence; the dangers of communicating bad science are far worse, but to understand the likely limitations of the use of evidence in decision-making when combined with multiple other factors including political realities, expertise, values etc.”

She added: “Why is evidence-informed policymaking so important?  Because whilst not perfect, the alternative is far worse: policymaking based on personal opinion and beliefs.  This is absolutely not to say that experience and judgement do not count, but that each of us is susceptible to our own personal biases and beliefs and we need to get away from ‘the cult of the expert’.  It is only by looking at an entire body of evidence, drawing upon formal documented evidence, evidence from citizens and evidence from practice and policy implementation that we can get a more holistic picture.”

Other themes at the meeting tackled new tools and methods for measuring child poverty and the role of data in monitoring the SDG’s.

An awards ceremony was also held during the meeting at which the best of UNICEF research generated during 2016 was recognised. The three top distinction awards went to a project in Indonesia which helped raise awareness around menstrual hygiene management, a research project centred on child marriage in Zambia and children’s perceptions of hospital paediatric care in West Africa.

Now in its fourth year, the annual DREAM meeting brings together top specialists from all regions of the globe working for UNICEF in data and analytics, research and monitoring and evaluation.