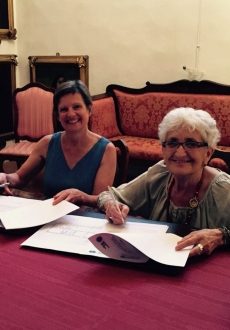 The Istituto degli Innocenti and UNICEF Office of Research – Innocenti, on 22 July, formally renewed their cooperation, signing an agreement to work together for another four year period (1 January 2017 – 31 December 2020).

The new agreement defines the range of activities that the two institutions will collaborate on over the coming years in order to promote recognition and observance of children's rights on the national and international levels, including joint management of the public Innocenti library.

Among many features in the new agreement, a highlight is finalization of terms and conditions for the use of new office premises made available by Regione Toscana and Istituto degli Innocenti for UNICEF Innocenti. The new facilities were agreed upon in a 27 March 2012 Memorandum of Understanding. The facilities, currently under renovation, will become available for use in May 2017 and will allow UNICEF Innocenti to expand its functions both as a global research centre on children and as a convening centre.

Over the next few years the Istituto and UNICEF will also collaborate to integrate within the new Museum Degli Innocenti (MUDI), exhibitions that feature displays on global children’s issues and the contributions of UNICEF to research at Innocenti.

Cooperation between UNICEF and the Government of Italy at Innocenti began in 1988 when they launched an effort to establish a “new global ethic for children” in Florence. Eventually UNICEF established its international research function at the nearly 600-year-old Ospedale, an institution that can be viewed as one of the earliest efforts by secular authorities to elevate the concerns of vulnerable children to the level of civic priority.