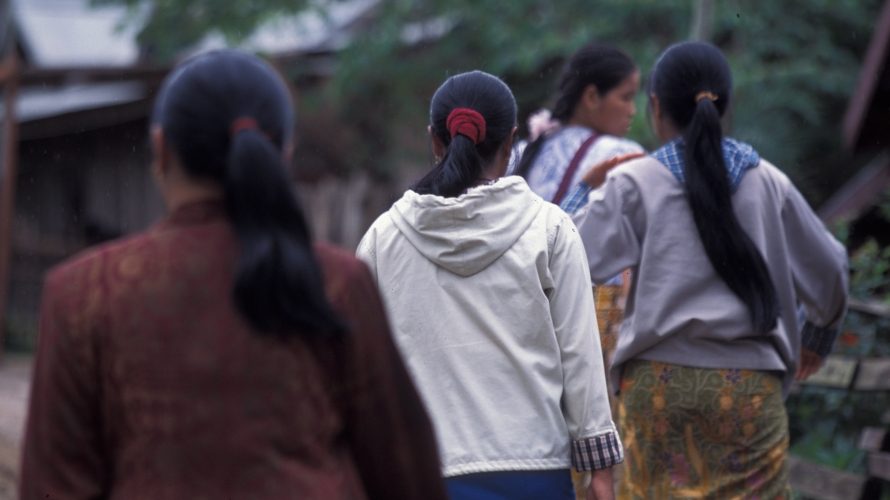 Leaving one’s birthplace to move to a new region or country has been one of the central features of human civilisation. An estimated 214 million people worldwide are international migrants and 740 million people are internal migrants.[i] Migration is not always a negative experience. Yet, the contemporary history of migration is replete with stories of conflict, persecution, economic hardship and trauma. Data from the UN agencies tell us that we are now witnessing the highest levels of displacement on record.  An unprecedented 65.3 million people around the world have been forced from home. Among them are nearly 21.3 million refugees.[ii]  There are also 10 million stateless people. Though the UNHCR provides most of the data for displaced persons, there is not enough precise collection, analysis and distribution of age and sex-disaggregated data on overall migration flows. A very large number of displaced children living close to camps and elsewhere are undocumented.  What we do know is that children represent about half of the displaced population globally.

According to the UNHCR the Asia Pacific Region is home to 3.5 million refugees, 1.9 million internally displaced persons and 1.4 million stateless people.  The majority originate from Afghanistan and Myanmar.[iii] Although both voluntary and involuntary migration occur in Asia, the prevalent flows are of temporary labour migrants.[iv]  Migration is a major driver of social and economic change in Asia.  Asia hosts some of the largest numbers of child migrants under the age of 18, who migrate internally and across national borders, with or without their parents.

Some of the key concerns raised by humanitarian actors who work with migrant children in Asia are: incitement to violence; sexual and gender based violence (SGBV) and impunity; child labour and trafficking; extortion, arbitrary arrest and torture; humanitarian needs; statelessness and identity; segregation and property rights; discriminatory restrictions on family life; freedom of movement; and, and crimes against humanity. This commentary provides a brief overview of the experiences of two of the major child migrant groups in the region, Rohingya and Afghan children.  It also offers some reflections on how the international and local actors can respond to the predicaments experienced by a child migrant.

Experiences of Child Migrants in Asia

The Rohingya population is one of the most persecuted, marginalised and disenfranchised groups in the world.  Through Myanmar’s state-sponsored exclusion policies Rohingyas were made aliens in their own land.  The forced migration of Rohingyas that generated the recent crisis beginning from 1942 is well documented. Some of the key exclusion policies and strategies that started with the military coup after which freedom of movement was restricted in 1962 include: the promulgation of the Emergency Immigration Act designed to prevent Rohingya re-entering from India, China and Bangladesh in 1974; the census program Nagamin, to check identification cards and take action against ‘illegal aliens’ in 1977; and finally the 1982 Citizenship Law following the 1978 exodus when many Rohingyas returned or attempted to return to Burma/Myanmar.  The strict licensing system to restrict movements, deportation and forced labour, land grabbing and torture have made the living conditions harsh for Rohingyas in their own homeland.  Racial hatred has been a significant factor in the human rights abuses perpetrated against Rohingyas.

In 1942 a significant event of internal displacement resulted from communal violence in Burma/Myanmar, which enveloped the whole of Arakan State.  The Buddhist Rakhine and the Muslim Rohingya were engaged in a bitter battle after which the Buddhist Arakanese moved to the South and the Muslim Rohingyas to the north, including 22,000 who crossed the border to Bengal.  A second wave of migration occurred in 1977, prior to a nationwide census project during the military operation Nagamin to register citizens and screen out foreigners.  Over 200,000 Rohingya fled across the border in Bangladesh. During 1991 and 1992, more than 270,000 Rohingya refugees crossed the border from Burma/Myanmar.  With them they brought their experiences of horrific violence, forced labor, rape, executions and torture.  Two refugee camps in Bangladesh have hosted 28,000 Rohingyas from Burma/Myanmar for more than 16 years. In addition, an estimated 200,000 Rohingyas live outside the camps in Bangladesh.

Most recently, after a series of communal riots in 2012, Rohingya families were again forced to move. Thailand permitted 2,055 Rohingya migrants to enter the country in 2013.  However, they were treated as illegal migrants and did not receive any protection traditionally provided to refugees. Human rights groups observed that the Thai government did not carry out regular age assessment procedures and lacked adequate screening to identify children.[v]  Even after the family members confirmed their ages, many children were forced to remain in detention centers.  Unaccompanied children also remained in the detention centers facing innumerable risks.

Boys from rural and poor areas, mainly from Burma/Myanmar and Cambodia are trafficked and delivered to fishing ports in Southeast Asia. Some extreme forms of exploitation occur in Asia’s fishing industry due to poor regulation and a lack of political will to end the rights violations. Thousands of Rohingya children, particularly older boys have been trafficked through three trafficking camps in Southern Thailand.  Many of them were also held for ransom or sold to fishing boats.  Thailand’s seafood industry, worth an estimated $7.3bn a year uses them as manual labourers.

As a battleground for several intra-state and international conflicts, including the Cold War and the Global War on Terror, the Afghan socio-political infrastructure has been deeply affected.  While the Unites States of America-led international military intervention that ousted the Taliban regime was generally welcomed by the Afghan public, the statebuilding and peacebuilding efforts in Afghanistan have had limited success. One of the largest recorded events of displacement in history occurred in Afghanistan in 1979.  A mass exodus of refugees from Afghanistan began in 1979 following the Soviet invasion.  This group still constitutes the second-largest refugee group and the world’s most protracted refugee situation.  At the height of the displacement there were 6 million Afghans exiles.

Currently some 2.6 million, representing 18 per cent of the global refugee population are under UNHCR’s mandate.[vi] About half of them are children.  Pakistan hosts 1.5 million registered Afghan refugees (10.5 per cent). While more than half of the registered refugee population is under the age of 15, 64 per cent are between 5-14 years and youth 15-24 make up another 20 per cent.[vii] Many Afghan children, usually male children between 13 to 17 have embarked on unaccompanied journeys.

Child migrants frequently work in physically demanding, harmful and dangerous situations. Internally displaced children employed in Afghanistan’s brick making industry start as early as five.  Their days begin at 4 am and end in nightfall.  Child labour has persisted and been reconstituted from traditional forms to become even more exploitative. Afghan refugee children in Pakistan are employed in potentially hazardous businesses such as shipwrecking, gem mining, construction, commercial farming, deep-sea fishing, and transporting goods and services.  One of the central themes of Pakistan’s counter-terrorism policy is to ensure mandatory return of unregistered Afghans.  In May 2016 for example, more than 2,000 refugees were arrested and 400 deported.[viii]  Undocumented Afghan children were returned, and many experienced secondary displacement inside Afghanistan.[ix]

Protection and Justice for Child Migrants

The international humanitarian discourses provide us with some insights on how in the age of the ‘Global War on Terror’, those who are forced to move are no longer welcome and are seen as security threats.  While citizens can be under surveillance and, at the same time ‘protected’ from outside threats, illegal immigrants, refugees, stateless people and internally displaced people remain as threats, thus creating moral and ethical dilemmas for states.  Although it is poor practice as a member of the international community and detrimental for the global image to send away refugees, governments often claim that it is imperative for state security and for the protection of citizens.  In this kind of security architecture, borders are strictly controlled; Identity differences are accentuated and securitized.

Three durable solutions: voluntary repatriation; local integration; or resettlement, are options available to address the ‘refugee cycle’. Current debates on migration control offer new opportunities in the search for solutions. When durable solutions are delayed, children, in particular, are vulnerable to exploitation, discrimination and violence. The interests of states in resolving these pressures can best be met by providing effective protection in regions of origin.

A significant number of child migrants in Asia live in or near refugee/IDP camps.   Children are particularly marginalised and vulnerable in these environments. Civil society organisations can play a crucial role in the promotion and protection of the rights of child migrants.  In environments where child protection laws have limited reach and are poorly enforced, appropriate family and community support systems are crucial.  Grass roots protection strategies can contribute to addressing displacement by strengthening resilience, rebuilding social networks and creating safe spaces. Although human trafficking as a transnational crime and advocacy on prevention, redress, policy response and treatment of the victims has received attention, there has been little focus on developing grass roots solutions, including through a gender justice approach, to protect displaced children. While the role of international and national agencies is crucial, we also need to explore how local organisations and networks can contribute to the design and implementation of policies that protect children on the ground. One key question is to consider how do protection measures enable and constrain children’s justice? How do they affect a displaced child’s participation, access to economic resources and her/his exposure to gender-based violence? How are rights, protection and justice understood and negotiated inside and outside camp environments?

Another significant gap in the scholarship is the experience of displaced girls’. While a range of education and health programs exist, interventions to improve adolescent girls’ knowledge and access to justice are rare. Pregnant girls, in particular, have limited access to schooling or quality vocational and technical training, contributing to their extreme vulnerability and lack of agency. Girls are identified as a high-risk group requiring special assistance and protection, and are often defined solely by their perceived vulnerability. However, experiences on the ground show that displaced girls have skills, knowledge and experience that could be fostered. For example, the YWCA of Sri Lanka through its three Service Groups focuses on girls and youth activism. The success of the YWCA ‘Young Women Lead Change’ project in Jaffna and micro-credit and education programs in Batticaloa indicate that partner collaboration, training and advocacy are key issues for internally displaced girls and young women. Their participation in protection design, implementation, education and training is imperative.

Despite the increasingly securitized stance of States, their policies can make a significant difference. Since 2001, in Afghanistan, school enrolment has increased from 900,000 to more than 6 million. Many of them are returnees. Importantly, the proportion of girls in schools has risen from almost nil to 35 per cent. The number of teachers has grown sevenfold - again, many of them returnees - and the number of schools have doubled.[x]  On the other hand, Rohingya children of Myanmar are lucky to complete fourth grade. A vast majority of Rohingya children, approximately 60 percent of them have never been to school due to poverty.  There are only five government schools for all of 12 Rohingya camps in the Western Rakhine State of Myanmar. The government excludes Rohingya children from accessing higher education in the name of maintaining peace. Local and international actors need to work together to develop a more child sensitive and child responsive mechanisms. The best interests of the child migrant must be at the heart of such mechanisms.