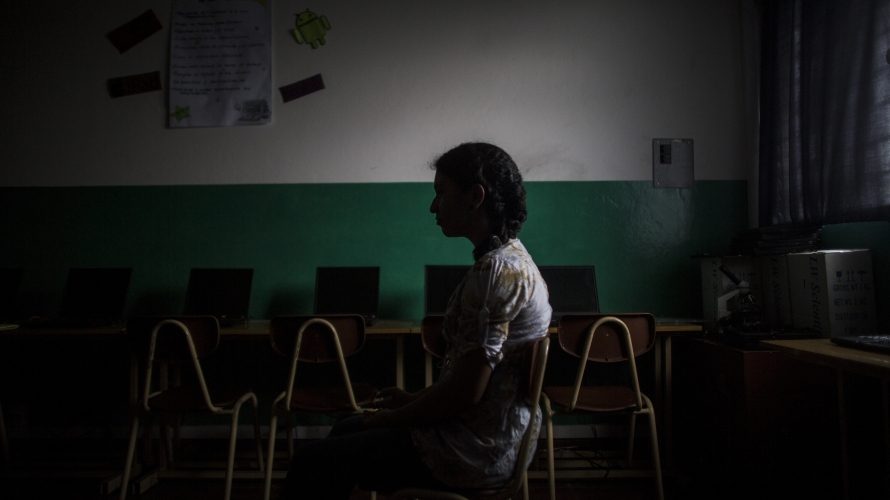 (11 October 2016) Bullying – online or in person – is a serious global problem affecting high percentages of children. It undermines child physical and emotional health, well-being and school achievement. The repercussions of bullying, for both victim and perpetrator, can continue into adulthood exacting high social and economic costs for countries.

This month important international steps are being taken to recognize the urgency and increase understanding of the scope of bullying worldwide.

On 12 October, Protecting Children from Bullying, a new report produced by the Special Representative of the Secretary-General (SRSG) on Violence against Children, Marta Santos Pais, will be presented to the General Assembly. The report represents an important step in formal international consideration of the widespread child rights problem of bullying.

The SRSG report reviews global measures to respond to bullying and recommends priority actions to ensure children’s protection from bullying and cyberbullying. A central theme of the report is the urgent need for high quality evidence to support improved policy and practice.

UNICEF Innocenti is currently developing a global database on bullying among 11- to 15-year-olds to support establishment of a reliable global indicator. The database is derived from six major international surveys covering 145 countries and will enable analysis of the prevalence of bullying by age and gender.

“In order to accelerate progress in protecting children from bullying it is essential to understand the extent of bullying across countries,” said Dominic Richardson, UNICEF Innocenti’s education specialist. “This database marks an important first step in bringing it all together.”

On 14 October the Special Representative's Office is set to further release an in-depth report Ending the Torment: Tackling Bullying from the Schoolyard to Cyberspace.

Researchers at Innocenti have also collaborated with Young Lives, an international longitudinal study on childhood poverty, to produce a new discussion paper Experiences of Peer Bullying among Adolescents and Associated Effects on Young Adult Outcomes. The new study is based on the experiences of 12,000 children in Ethiopia, India, Peru and Viet Nam over a 15-year period. It shows how being bullied at the age of 15 is associated with negative effects on resiliency, self-esteem and interpersonal relationships later in life.

The most commonly reported forms of bullying found in the Young Lives sample were humiliation, social exclusion and verbal taunting. Gender was found to be an important factor with boys at significantly greater risk of physical and verbal bullying, while girls experienced more indirect and relational bullying.

Children from poor families and out-of-school children were consistently found to experience higher rates of bullying.

“Longitudinal studies are our best tool to understand how we are affected by the constant change that defines children's lives,” said Mary Catherine Maternowska, lead researcher on violence affecting children at Innocenti.

“We can go beyond a ‘snapshot’ view to see how experiences in childhood may affect later outcomes. This expands our understanding of both resilience and vulnerability; it is the power of Young Lives’ approach.”

As a contribution towards UNICEF Innocenti’s Multi-Country Study on the Drivers of Violence Affecting Children, the discussion paper looks at how structural factors interact to affect everyday violence, including bullying, in different contexts - children’s homes, schools and communities - informing national policies for violence prevention.

The study also illuminates the gender dimension of bullying, examining the ways boys and girls are affected by different types of bullying at different ages, taking into account norms regarding socially acceptable behaviours for boys and girls.

The paper concludes that the wider social context of bullying can be a critical yet often missing element of prevention efforts, highlighting how bullying often occurs in complex settings where other forms of violence are also present.

Peer bullying has often lagged behind other forms of violence affecting children in global child protection advocacy, leading to the risk of underestimating the long-term impact on the lives of victims and perpetrators.

UN General Assembly resolution 69/158 on bullying, together with the 2030 Sustainable Development Goals, with specific targets on the protection of children from violence, abuse and exploitation, may comprise an important new foundation for progress in protecting children from bullying.

With new evidence confirming the global scope, as well as the emergence of new forms - such as cyberbullying and discriminatory bullying targeting minority and immigrant children - there is urgent need for better data collection, increased resource allocation and development of effective prevention models, including for low- and middle-income countries.