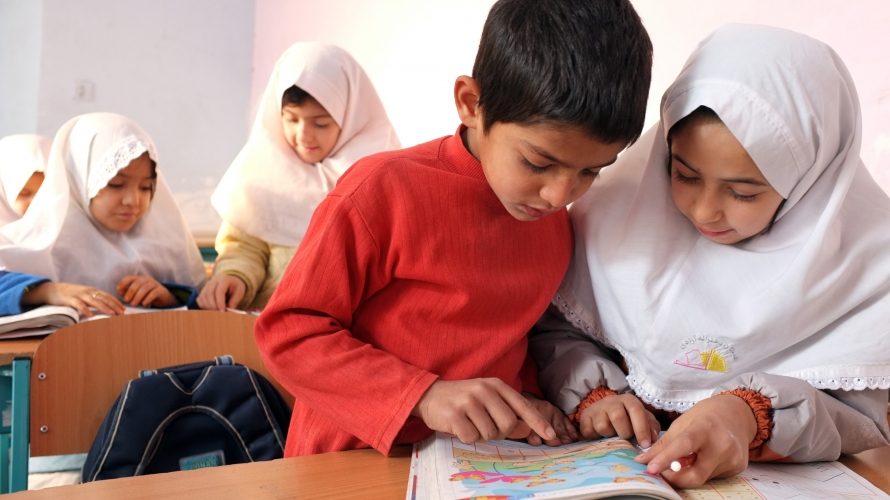 On 28 November 2011 in Iran, children attend a class run by the Association for the Protection of Child Labourers, a UNICEF partner, in Tehran, the capital. The NGO supports a programme that helps children forced into labour, as well as child refugees, complete their basic education.

(2 November 2016) The role of Islamic theology in shaping child protection practice was recently discussed in an internal  UNICEF Innocenti seminar led by Patrick O’Leary, professor at the Griffith University in Brisbane and currently Senior Fellow at UNICEF Innocenti

Patrick O’Leary, an internationally recognized researcher with experience in the field of child protection, gender based violence and the long-term impact of child sexual abuse, is currently studying child protection in Islamic contexts. His work challenges traditional ideas on the contributions that Islamic tradition has made in determining child protection frameworks, approaches and practices.

According to O’Leary’s seminar remarks (see embedded slides below), child protection is an integral concept in Islamic thought, and Islamic teachings on raising children have shaped child care in Muslim communities for centuries. However, limited integration of Islamic knowledge in most current child protection practice jeopardizes awareness about why some interventions may be ineffective. Likewise, lack of mutual understanding may also prevent religious communities and leaders from being aware of the causes of abuse and formal legal provisions on child protection.

O’Leary’s Innocenti seminar focused on convergent and divergent positions between the Western rights-based perspective and Islamic teaching regarding child protection policy and practice.

Underlining the aspects on which Islamic jurisprudence aligned with the United Nations Convention on the Rights of the Child - even in advance on Western law in some cases – O’Leary shared: “The idea that children have rights in Western society is very recent and appeared only in the twentieth century. Much older under Islamic law than under international law”.

In addition to convergent concepts, O’Leary also highlighted areas where differences exist.  Acknowledging that in some cases differences were rooted in the epistemological divide, including the principle of individual as subject of rights (in Western jurisprudence) versus the primacy of the collective or best interests of the community (Shariah law).

O’Leary stressed the need for more dialogue among cultures and faiths on the protection of children. He argues this is critical to the work of international child rights agencies, and that the development of relevant research and knowledge is essential to understanding of appropriate practices within Muslim families, particularly in child protection systems.

He also emphasized how the convergence between Islamic values and Western child protection models could have a double positive role. Increased awareness could counteract the spread of Islamophobia while challenging monolithic Western models, particularly when some potentially beneficial Islamic childcare practices may be considered incompatible, or even dangerous, from a Western rights-based perspective.