Cash transfers key to tackling poverty and hunger in Africa 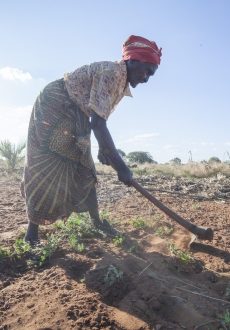 In a new book, From Evidence to Action: The Story of Cash Transfers and Impact Evaluations in Sub-Saharan Africa - launched in Johannesburg on November 15 – UNICEF, FAO, and other partners showcase the impacts cash transfer programmes have had in eight Sub-Saharan countries (Ethiopia, Ghana, Kenya, Lesotho, Malawi, South Africa, Zambia, and Zimbabwe).

“While cash alone is not enough to solve all problems, it is increasingly helping families avoid negative coping strategies, such as taking children out of school, or selling off assets.”

At the “Critical Thinking Forum,” organized by South Africa’s Mail & Guardian newspaper to launch the book, government and UN representatives discussed what’s working and what challenges remain with national social protection programmes across the region.

Evidence shows how there is an increase in secondary school enrollment as a result of cash transfers which allow families to purchase school uniforms and other supplies. Evidence shows that cash transfers did not result in increased expenditure on alcohol and tobacco – a commonly held concern. In Zambia, evidence showed an increase of farmland and expenditure on hired labour by 36 per cent. A significant portion of the evidence presented in the book is based on research conducted in the field by UNICEF Innocenti.

The new evidence finds that government-run cash transfer programmes are expanding across the continent, with national social protection strategies often including a cash component. While cash transfers in Africa tend to be provided unconditionally (direct and predictable transfers without strings attached), many countries do include programme messaging to encourage school enrolment and periodic health and nutrition checks for children.

For several years, there have been concerns that beneficiaries would waste money as a result of the cash transfers, however UNICEF and FAO gathered evidence across a ten year period through the Transfer Project, which clearly indicates that the majority of recipients are utilising cash transfers to better the living standards of their families, especially children.

Watch the video below to see how researchers are measuring the impact of cash transfers reducing child malnutrition in Ghana.