Global Symposium on Contributions of Psychology to Peace 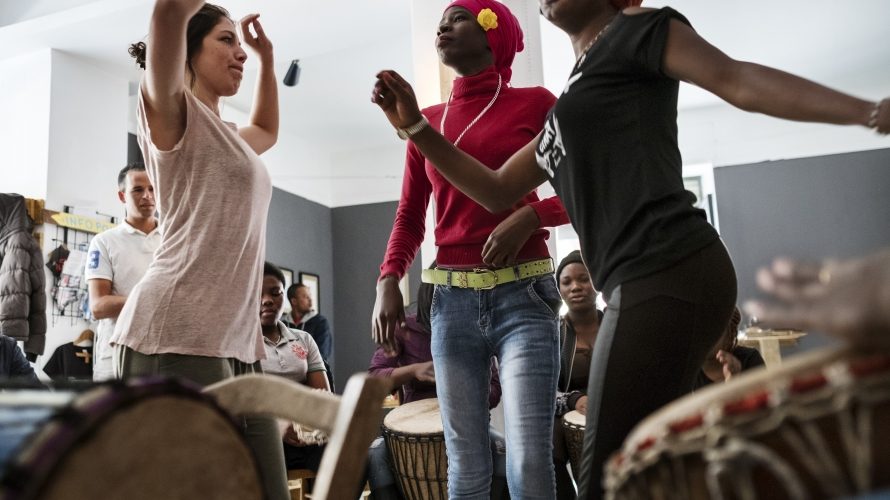 © UNICEF/UN063092/Gilbertson VII Photo
An Italian woman working at a refugee drop in center for migrants dances with beneficiaries at a 'jam session' held at Porco Rosso, a Palermo cafe in the Ballaro neighborhood of Sicily, Italy.

(22 May 2017) The latest and 15th global symposium on the Contributions of Psychology to Peace is being organized jointly by Sapienza University in Rome and the UNICEF Office of Research – Innocenti, 22 – 27 May 2017. The symposium, titled: Bridging Across Generations: Turning Research Into Action for Children and Families, brings together 68 international experts, participants and guest speakers to address a broad range of issues. The biennial international symposia series was initiated in 1988 by the International Union of Psychological Science, and continues to be coordinated by the Committee for the Psychological Study of Peace (CPSP).

The current Bridging Across Generations symposium is a multi-faceted gathering that captures research topics and priorities not only of peace psychology, but also of the host country, Italy, and its convening partner, UNICEF, the world’s largest child rights organization. The symposium program will examine pressing research issues for children and families, but also look at how to leverage findings to make the most of them in programming, policy and advocacy and bring about change at all levels for children and their families.

Present day Italy is faced with many interrelated challenges, which span across the study of psychological processes, inter-generational changes and international dynamics that are pivotal to contemporary peace research. Individuals, families and institutions are increasingly confronted by the need for constructing new forms of identity and co-existence as Italians, Europeans and Mediterraneans.

Finding itself in the middle of the European “refugee crisis”, Italy has also become one of the main landing places for children and families escaping from instability and extremism, arriving from across the southern shores of the Mediterranean Sea and the Middle East. Italy is facing new needs and fears, many of which are also present elsewhere in Europe and globally. The challenges are mirrored in the topics of research and intervention of local peace psychologists, who while also examining more traditional peace psychology topics such as dehumanization, victimization and inter-group contact, have a strong focus on studying inter-generational relationships, emerging citizenships, shared knowledge and family narratives, resilience and prosociality in families and children.

The vision for this symposium is to turn the focus of psychology and peace research toward children and adolescents, including their parents and caregivers, and build a picture of the challenges and opportunities they face: from the local Italian context to the diverse cultural and socio-political settings in which UNICEF, members of CPSP, and other stakeholders work. In true peace psychology spirit, the aim is also to go beyond exchanging interesting findings to turning research into outputs and actions that have the potential to positively impact on the lives of children, their families and communities.

The symposia enable scholars to present their current scholarship in peace psychology.  Additionally, symposia provide a platform for mutual exchange of ideas and experiences in which participants engage in intercultural dialogue aimed at reducing cultural bias and ethnocentrism in research and practice in peace psychology.  The goal is to bring forward voices from cultures and situations that are typically not included in peace discourses and to build an international community that promotes peace-related research and action.

CPSP members recognize that academics from well-funded universities in more affluent countries have greater opportunities to attend international gatherings than do those from universities and countries with fewer resources.  Hence, CPSP typically holds conferences and symposia in various locations around the world and often in developing countries, thereby activating and empowering local scholars and practitioners while providing a rich and diverse mix of research and practice.

Because of the importance placed on local scholarship and activism, typically symposia have themes that are relevant to local peace and social justice concerns. In addition, symposia include a mix of papers that bear on the traditional topics in peace psychology such as nonviolence, conflict transformation, peace education, social justice, humanitarian efforts, and sustainable development.

Previous symposia were hosted in the following cities:

PROGRAMME AGENDA - Bridging Across Generations: Turning Research Into Action for Children and Families

DOWNLOAD:
COMPENDIUM OF ABSTRACTS - 15th Symposium on Contributions of Psychology to Peace