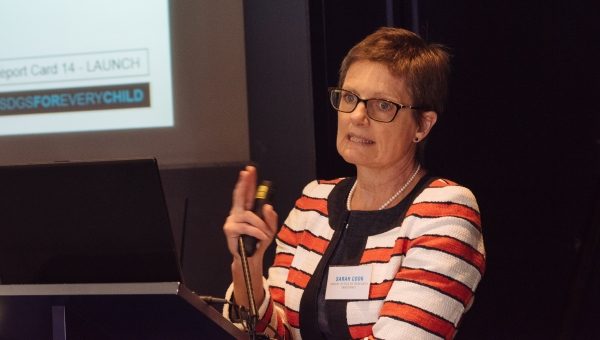 (22 June 2017) The global launch of Innocenti Report Card 14, Building the Future: Children and the Sustainable Development Goals in Rich Countries, was held 15 June at the Royal Society in London. Each year the report is launched at an international event designed to promote discussion and exchange of views on policy implications for child well-being that can be drawn from the Report Card findings.

Dr. Sarah Cook, Director of UNICEF Innocenti, delivered the keynote presentation. She stressed the universality of the SDG’s which are applicable to all countries regardless of income level, and provided details of how a high level of national income is not a guarantee of sustainable development.

“The SDGs give us an opportunity to identify the gaps in global monitoring of child well-being. How do we measure that? Where are the gaps? Where we may need new data, or we need better policies to improve trends?” said Cook in her keynote remarks. (View presentation below) 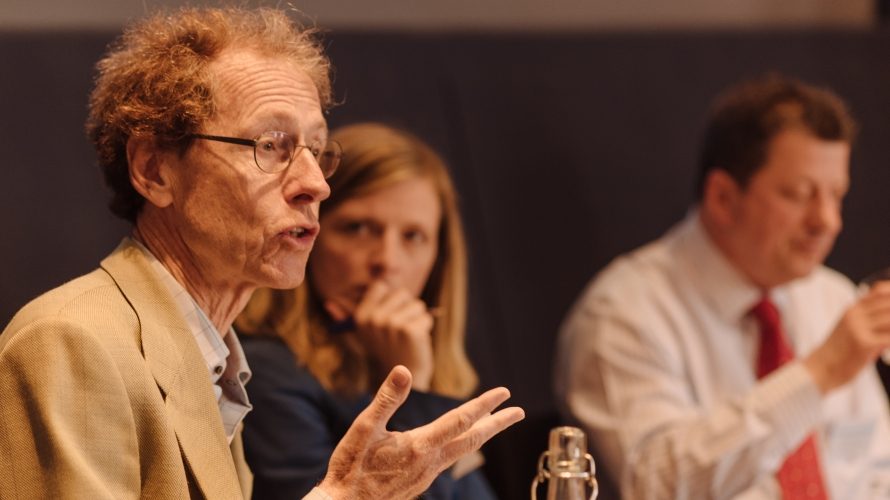 Jan Vandemoortele, Independent expert, PhD in Development Economics, served in various capacities with the United Nations for over 30 years.

Following the keynote presentation an expert panel discussion was organized and moderated by UK social affairs journalist and writer Louise Tickle. Panelist Jan Vandemoortele, independent expert, observed: “I think the value of this report is that is shows the member states of the OECD and the EU that these SDGs are truly universal in the sense that they apply as much to rich countries as they apply to poor countries, in different ways of course. It’s not only an agenda about development assistance.”

Panelist Romina Boarini, adviser and researcher with OECD noted: “When you start looking at the details of the performance, let’s say the less traditional categories brought up by the SDGs, we start learning very interesting and surprising results. Norway, that actually tops the league, does poorly on goals such as peace, justice and institutions… And there are opposite examples, because you have countries that are classified at the bottom of the table, countries like Mexico and Portugal, that actually do pretty well in some of the dimensions.” 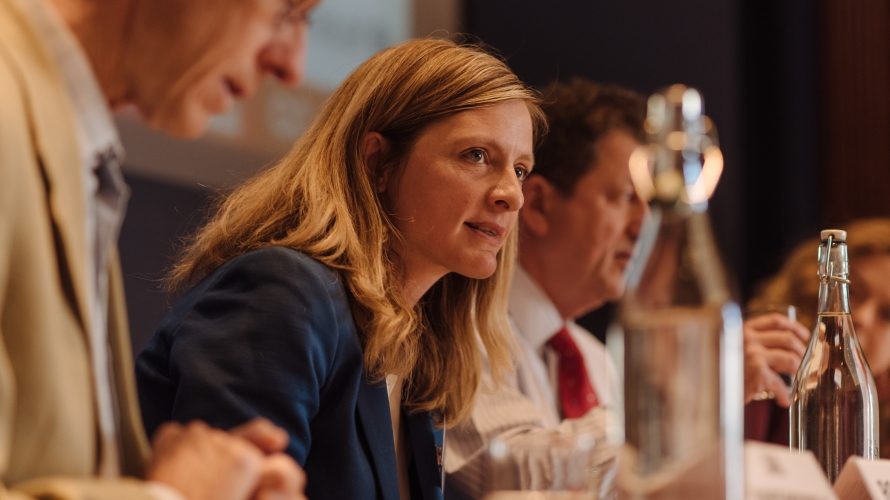 Portugal’s average rank was 1st among all countries in health and Mexico’s average was 4th in education in the Report Card 14 League Table. Norway’s average rank in peace, justice and strong institutions was 30th out of the 41 countries measured.

“If you were to look at the 41 countries in the Report and if you were to look at their newspaper headlines during their most recent election campaigns, just to see the number of times that children were in the newspaper… I think you would find that it was very rare that children made the headlines,” said panelist Richard Morgan, Global Director for child poverty at Save the Children.

“The most practical thing is to get children at the centre of our policy concerns in each of our countries, in the rich world as well as the less fortunate societies around the world," said panelist Richard Morgan, Global Director for child poverty with Save the Children. “It’s only by making children, and the complexity of the problems they face, visible, that we are going to get public policy to address them through government spending, through legislation, through data collection… I think the starting point is that we make sure children are not getting poorer, that we have policies that don’t make children poorer.” 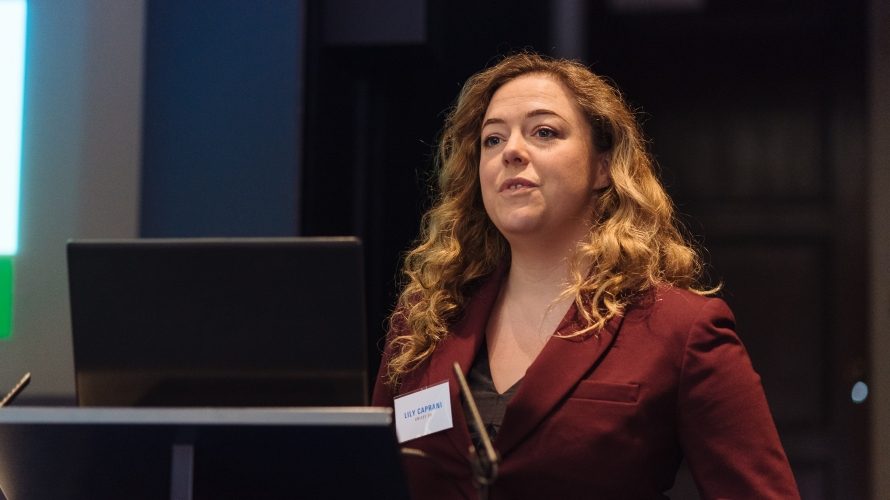 Lily Caprani, Deputy Executive Director of UNICEF UK highlighted the significance of the Report Card findings for the United Kingdom. “The positive news in here is that the UK, as you would hope, does find itself, overall, in the upper third…I’m not, unfortunately, surprised to see across the OECD countries there are really big stresses and strains on adolescent mental health. …That’s storing up huge problems for the future. That is, in my view, an emergency, and I don’t mean than in terms of a UN emergency, it is an urgent policy priority.”

The UK average ranking on the Report Card league table was 16th in poverty, 34th in hunger and 6th in reduced inequalities.

Panelist Richard Morgan highlighted the significance of findings in the Report Card on the effectiveness of social transfers in reducing child poverty: “The report also shows that where you have effective, adequate social protection transfers to the poorest households then you make a big dent in child poverty…I think it is very important that we subject every policy measure including on the economic front, every big economic decision to a test: is it going to harm children? And if it is we need to modify it.” 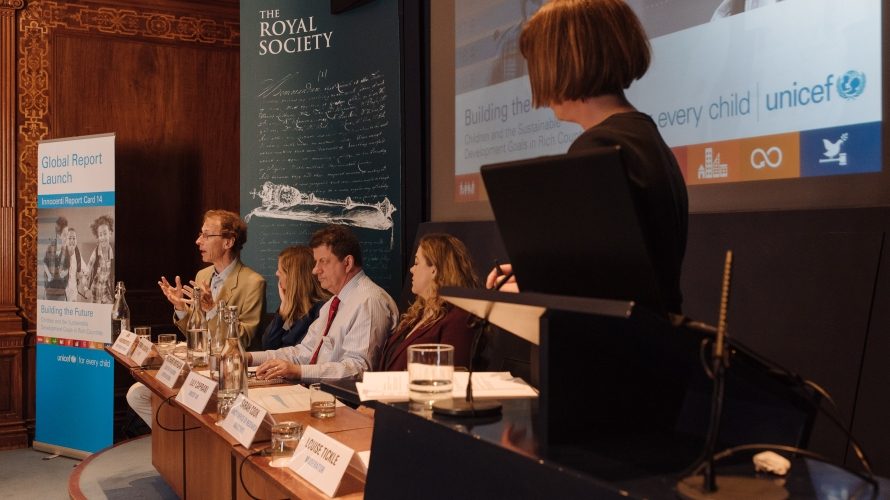 On the alarming data in Report Card 14 showing that 1 in 5 children live in poverty, combined with the widening gap in income inequality across most high income countries, Lily Caprani reflected: “This is based on an understanding of children’s lived experience, and when they tell us they are missing out, when they’re in relative poverty it’s not about whether they’ve got this pound or not, it’s about whether they can be involved in the life they expect to be involved in, it’s about 'do they have the same kind of opportunities to be involved in'…It’s about being able to fulfill their potential.”

Finally, when asked if the SDGs were realistic given the recent climate of retreat in many countries from the international order where sustainable development goals were unquestioned, Jan Vandemoortele sounded an optimistic note: “We live in a world where nationalism is resurgent, all over the world. The US is the best example. We saw it recently, they walked away from an international agreement on climate change, the Paris Accord. The good news is: What did the others do? Did the others run away? They stayed with it and actually they probably bonded stronger… We all know, deep down, that this is serious, that the situation calls for us to act. We have no choice but to deliver on the sustainable development agenda.” 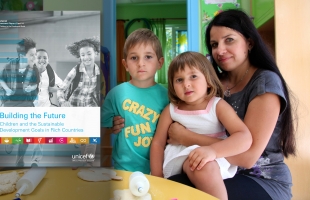 (New York/Florence, 15 June 2017) 1 in 5 children in high-income countries lives in relative income poverty and an average of 1 in 8 faces food insecurity, according to the latest Report Card issued by the UNICEF Office of Research - Innocenti. Building the Future: Children and the Sustainable Development Goals in Rich Countries is the first report to assess the status of children in 41 high-income countries in relation to the Sustainable Development Goals (SDGs) identified as most important for child well-being. It ranks countries based on their performance and details the challenges and opportunities that advanced economies face in achieving global commitments to children. “Report Card 14 is a wake-up-call that even in high-income countries progress does not benefit all children,” said Sarah Cook, Director of UNICEF Innocenti. “Higher incomes do not automatically lead to improved outcomes for all children, and may indeed deepen inequalities. Governments in all countries need to take action to ensure the gaps are reduced and progress is made to reach the SDGs for children.”  Key results on selected SDG indicators for children and adolescents in rich countries include:End poverty: On average 1 in 5 children in high-income countries lives in relative income poverty, though there is wide variation, from 1 in 10 in Denmark, Iceland and Norway to 1 in 3 in Israel and Romania. End hunger: An average of 1 in 8 children in high-income countries faces food insecurity, rising to 1 in 5 in the United Kingdom and the United States, and to 1 in 3 in Mexico and Turkey. Ensure healthy lives: Neonatal mortality has dramatically fallen in most countries; and rates of adolescent suicide, teenage births and drunkenness are declining. However, 1 in 4 adolescents reports two or more mental health issues more than once a week.Ensure quality education: Even in the best-performing countries, including Japan and Finland, around one fifth of 15-year-olds do not reach minimum proficiency levels in reading, mathematics and science. Achieve gender equality: On average, 14 per cent of adults surveyed in 17 rich countries believe that boys deserve preference for university education, and in the majority of these countries the belief is higher among males. In ranking 41 countries, the league table reads well for those countries that frequently appear at the top of recent comparisons of human and child development – the Nordic countries, Germany and Switzerland – and less well for lower-income countries in the group, such as Romania, Bulgaria and Chile. However, a closer look reveals room for improvement across the board as all countries rank in the mid- or bottom-third on two or more goals.For some indicators – income inequality, adolescent self-reported mental health and obesity – the trends suggest cause for concern in a majority of rich countries. In 2 out of 3 countries studied, the poorest households with children are now further behind the average than they were in 2008. The rate of obesity among 11–15 year olds and the rate of adolescents reporting two or more mental health problems a week is increasing in the majority of countries. Although many countries have seen broad progress in a number of indicators, there are still wide gaps between them in other areas. National income levels fail to explain all of these differences: for example, Slovenia is far ahead of much wealthier countries on many indicators, while the United States ranks 37 out of 41 in the summary league table. Based on the results presented in Report Card 14, UNICEF calls for high-income countries to take action in five key areas: Put children at the heart of equitable and sustainable progress – Improving the well-being of all children today is essential for achieving both equity and sustainability.Leave no child behind – National averages often conceal extreme inequalities and the severe disadvantage of groups at the bottom of the scale.Improve the collection of comparable data – in particular on violence against children, early childhood development, migration and gender.Use the rankings to help tailor policy responses to national contexts – No country does well on all indicators of well-being for children and all countries face challenges in achieving at least some child-focused SDG targets.Honour the commitment to global sustainable development – The overarching SDG framework engages all countries in a global endeavor.
Read the article 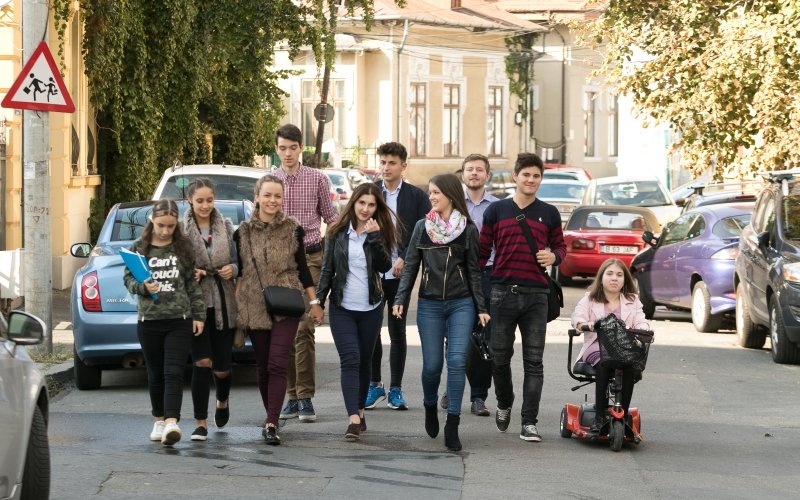 UNICEF has a universal mandate for children in every country. For the past 20 years, the Office for Research has contributed to this mandate through its Innocenti Report Card series. The Report Cards focus on the well-being of children in high-income countries. They have been at the forefront of informing and influencing debates about children’s well-being in these countries. In recent years, the office has also developed other research on children in high-income countries. This has included reports on:Family-friendly policies which ranks countries on their policies on parental leave and childcare services,The financial impacts of the COVID-19 pandemic on children and families which highlights the risks of the pandemic for child well-being and makes a series of recommendations about how to reduce these risks.During 2021, we will be publishing reports on:The accessibility, affordability, and quality of childcareChildren’s participation rightsResearch to inform the European Union Child GuaranteeChildren’s experiences and views of COVID-19 in Italy.
Visit the page