(13 April 2018) Despite huge gains in child well-being during the MDG era, progress for adolescents – children in the second decade of life – is still lagging behind. The recently published Handbook of Adolescent Development Research and its Impact on Global Policy, edited by Jennifer E. Lansford and Prerna Banati, aims to fill critical evidence gaps to speed evolution of better policy-making specifically tuned to this dynamic life stage.

Of the 1.2 billion adolescents in the world today, 90% live in low- and middle-income countries. Enrollment in secondary schools is still low for adolescents in many parts of the world, with illiteracy rates approaching 30% in the least developed countries. Further, adolescents not in school are more vulnerable to trafficking, recruitment into armed conflict, and child labor. Many adolescent girls marry and begin bearing children at a young age, contributing to the perpetuation of poverty and health problems. 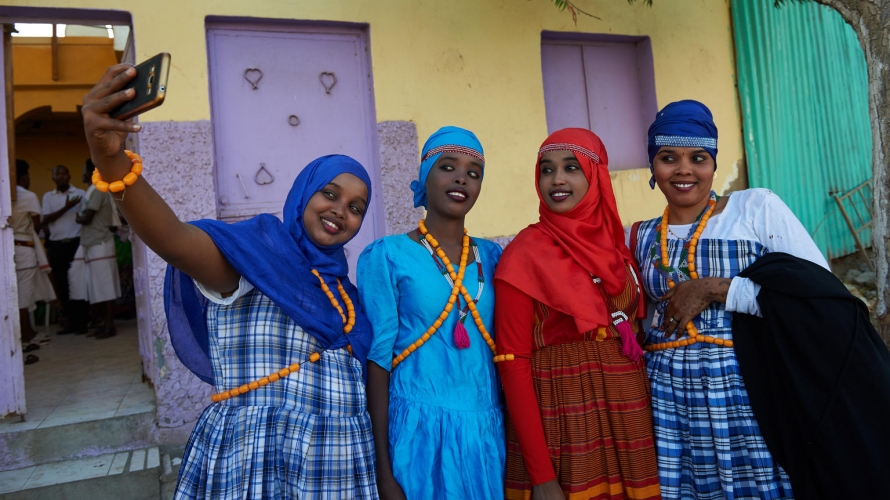 A group of youth use a smartphone to take a selfie outside a Community Management Committee meeting in Assamo neighbourhood in Djibouti.

Adolescents also represent a resource to be cultivated through education and training, to move them toward economic independence. This can be accomplished through initiatives to improve their reproductive health, and through positive interpersonal relationships to help them avoid risky behaviors and make positive decisions about their futures.

“Several years ago, a similar handbook on early childhood development was transformative in our approach to early childhood. By bringing state of the art research to policymakers and practitioners, we hope this volume will go some way to improving the lives of adolescents globally,” said Prerna Banati, lead researcher on adolescent well-being at UNICEF Innocenti.

The new handbook will be invaluable for a wide range of stakeholders working with adolescents in low- and middle-income countries. The volume tackles both the challenges and the promise of adolescence by presenting recent research on social, emotional, behavioral, cognitive, and physical development. The volume looks at adolescent development with a distinctive focus on issues that affect adolescents in low- and middle-income countries. It adopts a positive framing, representing young people as opportunities, to accelerate a positive shift in discourses around young people.

An Overview: Handbook of Adolescent Development Research and it Impact on Global Policy from UNICEF Office of Research - Innocenti

According to Laurence Steinberg of Temple University, a leading expert on adolescence, the handbook is “An important and timely resource. It combines up-to-date reviews of research on adolescent development by the world's leading authorities with thoughtful discussions of some of the most pressing concerns that societies face in both developed and developing countries in their efforts to minimize problematic outcomes and maximize positive development during this critical stage of development.”

In most contexts, policy and programme responses to adolescents are fragmented and inconsistent. Disconnects between national level policies and local services, as well as lack of continuity with early childhood responses, present a significant challenge to ensuring a coherent approach for this age group. Increasingly, adolescent participation and demands for rights-based approaches are seen, and often unfortunately conflated with violence. This volume adopts the perspective of young people as a valued investment both at individual and societal levels.

“An important and timely resource. It combines up-to-date reviews of research on adolescent development by the world's leading authorities with thoughtful discussions of some of the most pressing concerns that societies face in both developed and developing countries..."

“The bulk of research comes from high income contexts, so we don’t have a good enough evidence base in the settings where most adolescents are living today,” said Banati. “There has been quite a bit of policy attention paid to older adolescents, younger adolescence seems to slip between the policy cracks. There is also substantial incoherence in policy approaches, as evidenced in the volume.”

Over the last thirty-five years, specialized journals addressing adolescent issues have been launched, including the Journal of Adolescence, the Journal of Adolescent Research, and the Journal of Research on Adolescents. Despite a growth in scholarly literature, much is still disproportionately focused on adolescent experience in high income Western contexts, with comparatively few empirical studies of young people growing up in non-Western nations published in English language journals devoted to the field of adolescent development. Much scientific evidence developed in the global North, lacks reflection on the diverse experiences of adolescents around the world, including in harsh situations of war, conflict, chronic stress or malnutrition. And surprisingly few of the major scientific findings on adolescence have been translated into effective policy.

Adolescence is often described as the developmental period from the onset of puberty until the transition to adulthood, variously defined by one, some or all of the following: marriage, parenthood, completion of formal education, financial independence from parents (approximately ages 10-20). 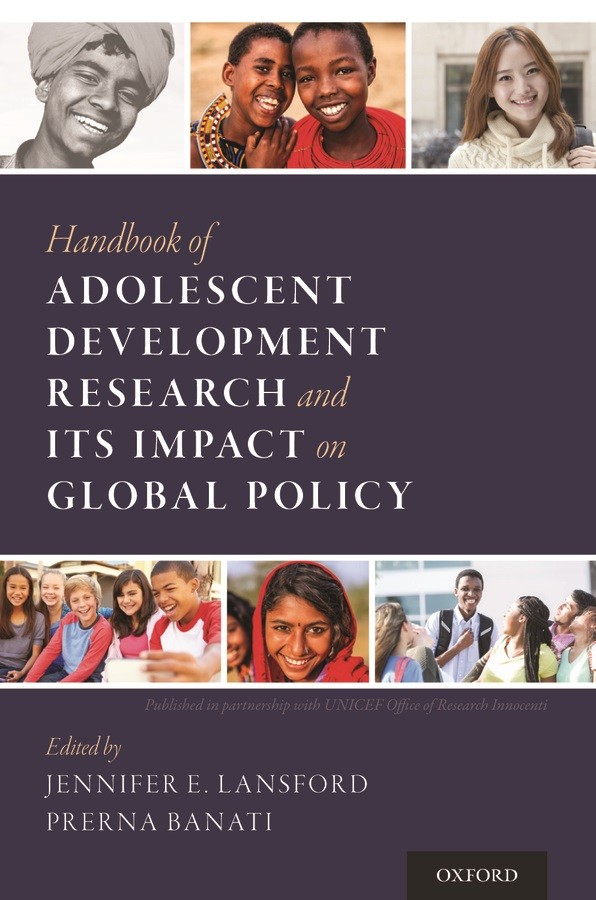 According to the handbook: “Arguably a social construction, its initial widespread use conferred gender, race and class connotations and implications: ‘the ‘adolescent boy’ was to be managed and contained, while allowed to be ‘wild;’ the adolescent girl was to be trained and domesticated’ (Morrow, 2015). In modern times, adolescence has largely had a bad reputation. Used interchangeably with ‘teenager,’ Western notions tend to describe a period of ‘storm and stress’ (Hall, 1904), involving hormones, drama, unsafe experimentation, and irresponsibility. However, in many parts of the world, arriving at adolescence marks increasing responsibility – with many hurtling towards adulthood by entering the workforce, marriage or parenthood. Adolescents in one country may be protected from economic or domestic responsibilities, in another, such responsibilities may not only be the norm, but considered beneficial for both the adolescent and the family.”

A diverse group of over 50 authors from different countries and disciplinary backgrounds have contributed chapters to this volume. This diversity reflects the complexity of adolescence, while allowing the volume to situate adolescents within broader cultural contexts. This makes the volume more relevant for global policy debates and political decision-making regarding when, why, and how some programs and interventions for adolescents should be tailored to better serve the needs of their intended recipients. The diverse contributions collectively relay a powerful underlying narrative seen across the chapters, which describes adolescents as a positive force, to be valued and understood. In challenging historical interpretations of adolescence, the volume has engaged with contemporary issues explicitly, and sometimes implicitly across the chapters, including the topics of migration and human security, technology and inequality.

(The Handbook of Adolescent Development Research and its Impact on Global Policy is now available for purchase at Oxford University Press - Academic.) 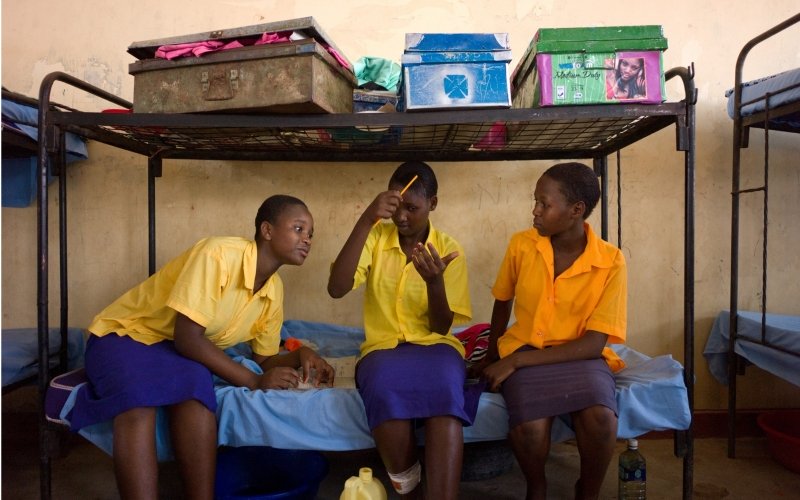 Despite great strides in improving overall child well-being, progress has been slower in key areas of adolescent vulnerability, including exposure to violence, early marriage and school completion, especially among adolescent girls. The Lancet Commission ‘Our Future’ (2016) has examined the rapidly changing social and structural determinants of adolescent well-being and their implications on health promotion and prevention work.  It stresses the importance of adolescence as a critical period of formative growth that affects well-being across the life course. Although evidence is building in some domains of adolescent’s lives, greater understanding of the transition to adulthood and how different underlying factors interact is needed in order to inform the basis for effective programming and policy. The need to incorporate consideration of different structural factors into programme design is gaining support, yet there is still little guidance on systematic evidence-based approaches to employ in practice. The Adolescent Research Programme is advancing global understandings of adolescent well-being in selected countries and themes by defining the drivers of well-being outcomes (‘causes and consequences’) and examining effective policy and programme interventions (‘what works’). Research Priorities 2014 – 2018• Rigorous evidence generation on structural and social determinants of adolescent wellbeing across sectors and throughout the life course.• Understanding formal institutions, systems and policy processes as well as social and cultural norms affecting behaviours and policy implementation.• Analytical focus on age and gender gaps to shed light on the main drivers of adolescent vulnerability.Global Research PartnershipTogether with UK Department of International Development, Italy, SIDA, UNICEF as well as US Department of Labour, the Oak Foundation, and others, the global research partnership is working with multiple national governments and institutions to improve understandings of various dimensions of adolescents’ lives.The programme is linked to the Gender and Adolescence Global Evidence initiative. It leverages UNICEF’s programme technical capacity as well as networks of regional and country offices and implementing partners in low and middle income countries.Drawing on multi –disciplinary research expertise, the UNICEF programme has produced cutting edge research that explores what works to improve outcomes for adolescents.Quality evidence is having impact - informing effective policy and interventions in focus countries and beyond.
Visit the page 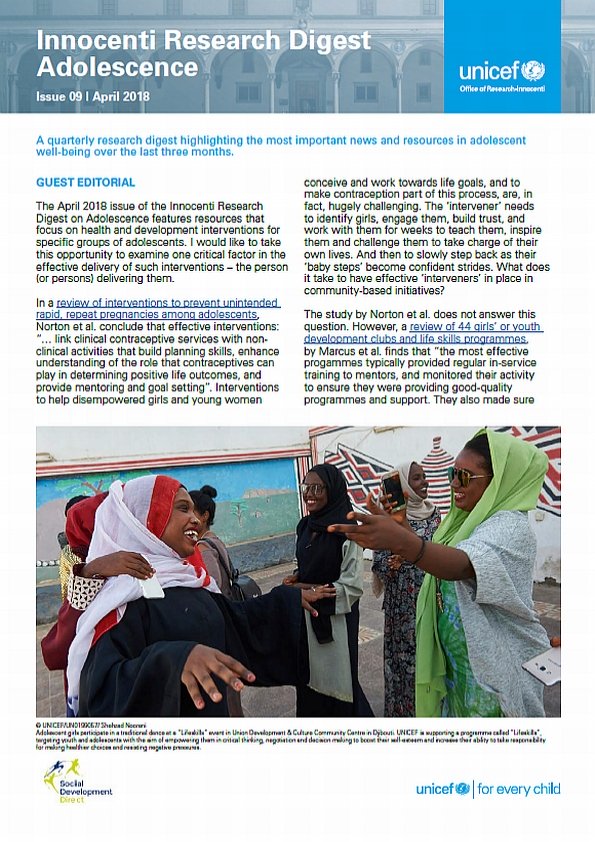 A quarterly research digest highlighting the most important news and resources in adolescent well-being over the last three months.
Read the publication 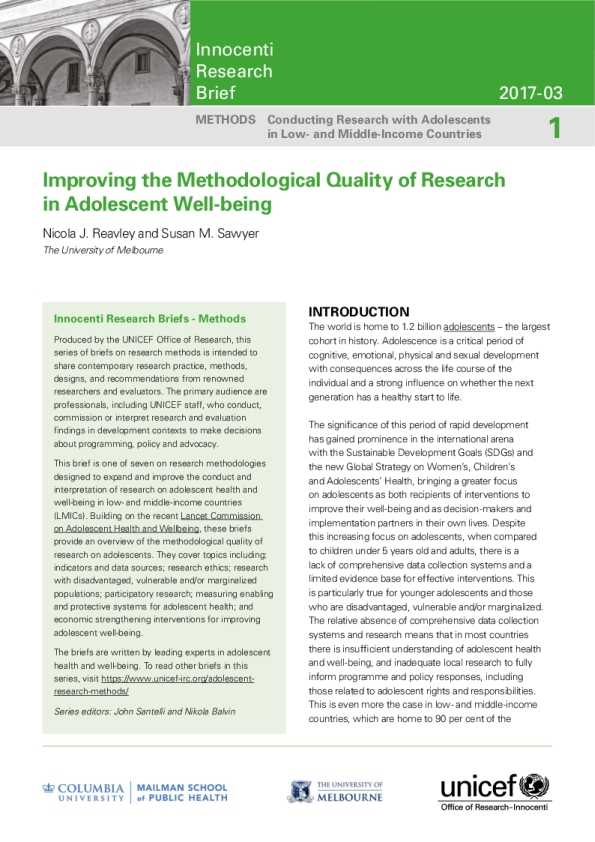 Improving the Methodological Quality of Research in Adolescent Well-being

This brief introduces the methodological series Conducting Research with Adolescents from low- and middle-income countries (LMICs), outlining key research themes, intervention types, and their associated methodological implications. It highlights adolescence as a critical phase within the life course and a period of biological and social transition that is itself undergoing change. It makes the case that new understandings from neuroscience have important implications for programming; addressing social and structural determinants is crucial to improving adolescent well-being; inter-sectoral and comprehensive multi-component action is required, as is matching action to need; and gender and equity should always be considered in research, programmes and policy.
Read the publication