Despite the multiple benefits of breastfeeding for both baby and mother, a new UNICEF report reveals that 1 in 5 babies in high-income countries are not breastfed.
10 May 2018

(11 May 2018) This Mother’s Day, UNICEF is calling attention to the importance of breastfeeding, particularly in high-income countries. A UNICEF report released yesterday, Breastfeeding: A Mother’s Gift to Every Child, reveals that worldwide, approximately 7.6 million babies a year are not breastfed.

UNICEF has long been at the forefront of mother and baby care. Notably, together with the World Health Organisation, UNICEF introduced the Baby-friendly Hospitals Initiative in 1991, providing practical steps maternity and newborn facilities worldwide should take to protect, promote and support breastfeeding.

Breastfeeding is one of the most powerful practices for promoting child survival and wellbeing. It also promotes healthy growth and boosts early child development, including brain development. Breastfeeding is not just good for babies but also benefits mothers, having shown to protect against post-partum haemorrhage, postpartum depression, ovarian and breast cancer, heart disease and type 2 diabetes. In short, breastfeeding is among the most effective ways to protect maternal and child health and promote healthy growth and optimal development in early childhood.

Almost 30 years after the Baby-friendly Hospitals Initiative, and despite the myriad of benefits for both baby and mother, UNICEF’s latest report reveals that 1 in 5 babies in high-income countries are not breastfed, compared to 1 in 25 babies in low- and middle-income countries. 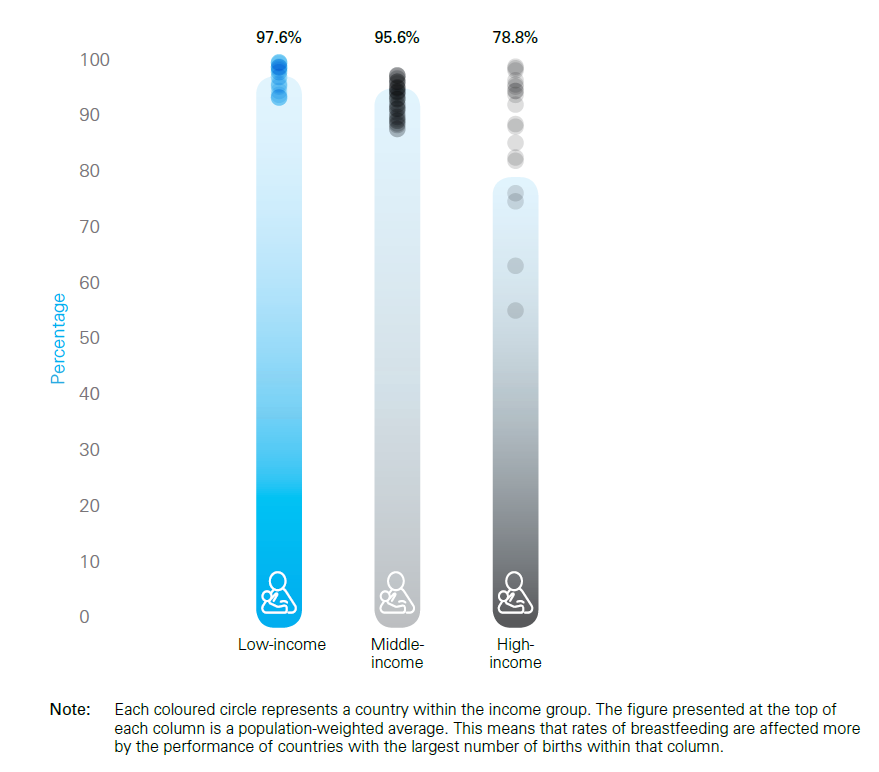 Percentage of newborns ever breastfed by country income group, 2017. Source: Breastfeeding: A Mother’s Gift for Every Child, UNICEF

Commenting on the results, UNICEF’s Deputy Director a.i, Shahida Azfar says ”These breastfeeding gaps across income levels are a strong indication that countries, regardless of the level of wealth, are not informing and empowering every mother to breastfeed her baby.”

Many other factors contribute to a positive environment for breastfeeding, including policies guaranteeing parental leave, the right to breastfeed in the workplace, information on breastfeeding within health facilities, social norms that encourage breastfeeding, support from community members, and restrictions on the marketing of breast milk substitutes. The report gives information on how governments, private sector, civil society and communities can address these factors to encourage and support breastfeeding locally.

This Mother’s Day, UNICEF is urging countries worldwide to empower and enable women to breastfeed in order to keep every child alive and to build healthy, smart and productive societies. Improving breastfeeding rates around the world could save the lives of more than 820,000 children under age 5 every year, as well as preventing an additional 20,000 maternal deaths from breast cancer. There are also financial incentives to promoting breastfeeding; according to an estimate in the Lancet in 2016, if the US were to improve breastfeeding rates from existing levels to 90%, treatment costs of childhood diseases would be reduced by at least $2.45 billion.

The fact that breastfeeding rates remain low in many contexts, with substantial gaps between income groups, suggests that countries are not providing women with sufficient information and support. This requires urgent attention. “Breastfeeding is the best gift a mother, rich or poor, can give her child, as well as herself,” says Azfar. When women are informed, empowered and supported to breastfeed, the benefits extend to their children, to themselves and to society as a whole. 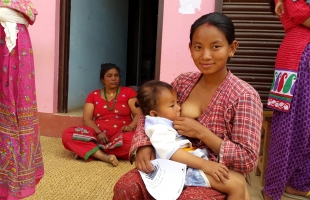 Babies and mothers worldwide failed by lack of investment in breastfeeding

(1 August 2017) No country in the world fully meets recommended standards for breastfeeding, according to a new report by UNICEF and the World Health Organization (WHO) in collaboration with the Global Breastfeeding Collective, a new initiative to increase global breastfeeding rates.The Global Breastfeeding Scorecard, which evaluated 194 nations, found that only 40 per cent of children younger than six months are breastfed exclusively (given nothing but breast milk) and only 23 countries have exclusive breastfeeding rates above 60 per cent.Evidence shows that breastfeeding has cognitive and health benefits for both infants and their mothers. It is especially critical during the first six months of life, helping prevent diarrhoea and pneumonia, two major causes of death in infants. Mothers who breastfeed have a reduced risk of ovarian and breast cancer, two leading causes of death among women.“Breastfeeding gives babies the best possible start in life,” said Dr. Tedros Adhanom Ghebreyesus, Director-General of WHO. “Breastmilk works like a baby’s first vaccine, protecting infants from potentially deadly diseases and giving them all the nourishment they need to survive and thrive.”The scorecard was released at the start of World Breastfeeding Week alongside a new analysis demonstrating that an annual investment of only US$4.70 per newborn is required to increase the global rate of exclusive breastfeeding among children under six months to 50 per cent by 2025.Nurturing the Health and Wealth of Nations: The Investment Case for Breastfeeding, suggests that meeting this target could save the lives of 520,000 children under the age of five and potentially generate US$300 billion in economic gains over 10 years, as a result of reduced illness and health care costs and increased productivity.“Breastfeeding is one of the most effective – and cost effective – investments nations can make in the health of their youngest members and the future health of their economies and societies,” said UNICEF Executive Director Anthony Lake. “By failing to invest in breastfeeding, we are failing mothers and their babies – and paying a double price: in lost lives and in lost opportunity.”The investment case shows that in five of the world’s largest emerging economies—China, India, Indonesia, Mexico and Nigeria—the lack of investment in breastfeeding results in an estimated 236,000 child deaths per year and US$119 billion in economic losses.Globally, investment in breastfeeding is far too low. Each year, governments in lower- and middle-income countries spend approximately US$250 million on breastfeeding programs; and donors provide only an additional US$85 million.The Global Breastfeeding Collective is calling on countries to:Increase funding to raise breastfeeding rates from birth through two years.Fully implement the International Code of Marketing of Breast-milk Substitutes and relevant World Health Assembly resolutions through strong legal measures that are enforced and independently monitored by organizations free from conflicts of interest.Enact paid family leave and workplace breastfeeding policies, building on the International Labour Organization’s maternity protection guidelines as a minimum requirement, including provisions for the informal sector.Implement the Ten Steps to Successful Breastfeeding in maternity facilities, including providing breastmilk for sick and vulnerable newborns.Improve access to skilled breastfeeding counselling as part of comprehensive breastfeeding policies and programmes in health facilities.Strengthen links between health facilities and communities, and encourage community networks that protect, promote, and support breastfeeding.Strengthen monitoring systems that track the progress of policies, programmes, and funding towards achieving both national and global breastfeeding targets.Breastfeeding is critical for the achievement of many of the Sustainable Development Goals. It improves nutrition (SDG2), prevents child mortality and decreases the risk of non-communicable diseases (SDG3), and supports cognitive development and education (SDG4). Breastfeeding is also an enabler to ending poverty, promoting economic growth and reducing inequalities.In 1990 UNICEF and WHO adopted the Innocenti Declaration on the Protection, Promotion and Support of Breastfeeding in Florence to ensure that all facilities with maternity services fully implemented the Ten Steps to Successful Breastfeeding to support and encourage breastfeeding for new born infants which first appeared in a joint statement by the World Health Organization (WHO) and UNICEF in 1989 on Protecting, Promoting and Supporting Breastfeeding: the Special Role of Maternity Services. The Steps as well as the International Code of Marketing of Breast-milk Substitutes became the foundation for the Baby-friendly Hospital Initiative (BFHI) in 1991.In 2009 BFHI was updated taking into account the experiences from the first 15 years of implementation and the guidance on infant feeding among mothers infected with HIV. In 2012, the 194 countries of the World Health Assembly committed to a target of increasing the global rate of exclusive breastfeeding in the first six months of life from a baseline of 37 per cent to 50 per cent by 2025. About the Global Breastfeeding Scorecard - The Scorecard compiles data from countries all over the world on the status of seven priorities set by the Global Breastfeeding Collective to increase the rate of breastfeeding. The 23 countries that have achieved exclusive breastfeeding rates above 60 per cent are: Bolivia, Burundi, Cabo Verde, Cambodia, Democratic People’s Republic of Korea, Eritrea, Kenya, Kiribati, Lesotho, Malawi, Micronesia, Federated States of Nauru, Nepal, Peru, Rwanda, São Tome and Principe, Solomon Islands, Sri Lanka, Swaziland, Timor-Leste, Uganda, Vanuatu, and Zambia.About the Global Breastfeeding Collective - Co-led by UNICEF and WHO, the Global Breastfeeding Collective’s mission is to rally political, legal, financial, and public support for breastfeeding, which will benefit mothers, children, and society. This press release was originally published on www.unicef.org/breastfeeding
Read the article 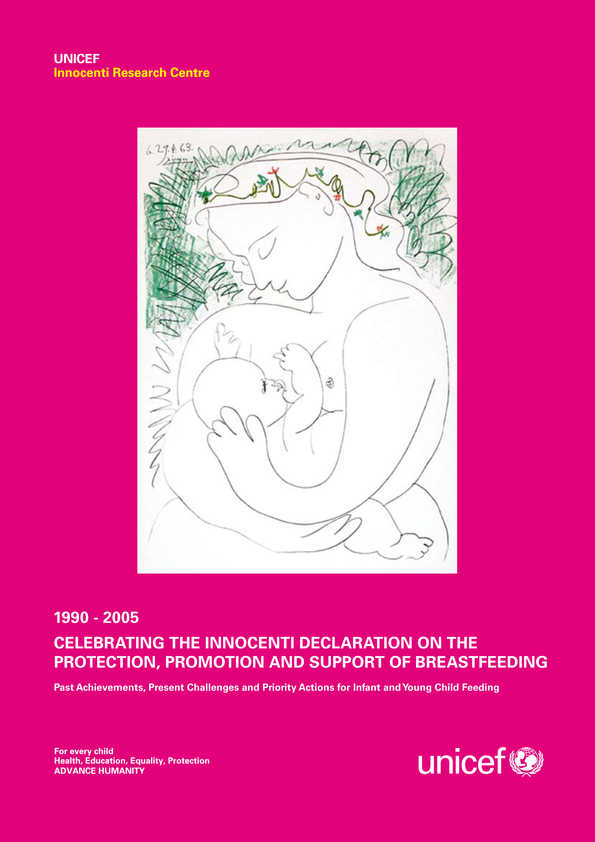 1990-2005 Celebrating the Innocenti Declaration on the Protection, Promotion and Support of Breastfeeding: Past achievements, present challenges and priority actions for infant and young child feeding (second edition)

This publication reviews the context of the Innocenti Declaration and analyzes the achievements that have been realized towards the targets that were established in 1990. It describes the continuing and new challenges that exist to optimal feeding of infants and young children, and suggests a way forward towards the global aim of ensuring universal enjoyment of children’s right to adequate nutrition.
Read the publication 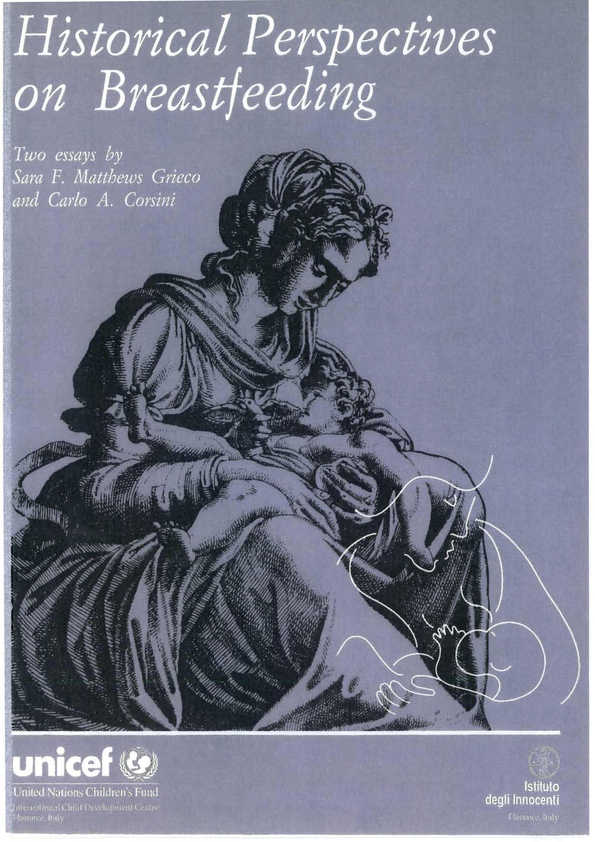 Historical research on breastfeeding patterns, first carried out in the 1960s and early 1970s, was largely spurred by contemporary concerns about the potentially devastating effects of a massive shift from breastmilk to artificial means of infant feeding, especially in developing countries.
Read the publication