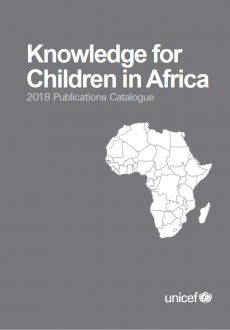 (4 July 2018) Each year, UNICEF and its partners in Africa generate a wealth of evidence about the situation of children. The 2018 edition of the Knowledge for Children in Africa Publications Catalogue represents the collective knowledge produced by UNICEF Country and Regional Offices across Africa. Knowledge and evidence are essential to informing the development, monitoring and implementation of policies and programmes for the realization of children’s rights.

In Africa, the current demographic revolution will see the under-18 population increase by two thirds, reaching almost 1 billion by 2050. These figures underscore an urgent need for strong evidence to inform the implementation of social policies and budgets for children.

The catalogue features over 130 of the most important reports and studies that UNICEF and its partners have generated on the situation of children and young people across the continent. Covering a wide range of topics - including Child Poverty; Education and Early Childhood Development; and Social Protection among others - the publication captures some of the most advanced work to support efforts by children and young people to realize their rights to survival, development and protection.

The under-18 population in Africa will reach almost 1 billion by 2050. 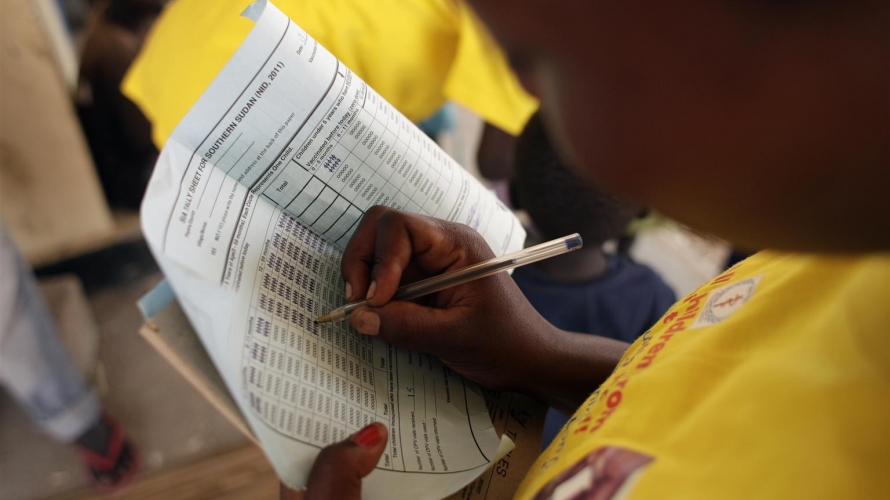 A vaccinator records the number of children who have been immunized against polio by a vaccination team in Juba, South Sudan.

Commenting on this, Social and Economic Policy expert Lucia Ferrone, notes an increase in efforts to track and measure child poverty in more African countries over recent years. “It’s great to see so many countries not only join the measurement, but also embrace UNICEF’s measure of child multidimensional poverty,” says Ferrone. “MODA was the first measure used to assess child poverty in the Sub-Saharan Africa region, revealing that as many as 67% of children were multidimensionally poor. Now, countries are using MODA to adapt their national needs and priorities.”

"It’s tremendous to see countries like Mali proceed on the second round of child poverty measurement since 2014."

Many studies in the catalogue explore the area of Education and Early Childhood Development. Despite considerable progress towards the goal of universal primary education, "high school drop-out rates, low levels of school readiness, poor learning outcomes, and high levels of teacher absenteeism continue to plague many African states," notes education expert Despina Karamperidou. "Generating high quality evidence on the magnitude and underlying causes of negative education outcomes is the first crucial step in addressing them through the development of education policies and programs that are both context specific and culturally sensitive."

UNICEF contributes to this effort by investing in three types of research projects, outlined in detail in the catalogue: (1) tools development for the measurement of education outcomes, (2) quantitative mapping and assessment exercises, and (3) qualitative causal analyses. Karamperidou comments that "collectively, these studies provide an evidence base on the major education challenges besetting the continent and a real opportunity for improving the efficiency and effectiveness of African education systems."

The catalogue aims to more effectively disseminate knowledge and evidence being generated in Africa for key African constituencies working on children’s rights and development, and promote improved south-south learning exchange among countries. This third edition of the catalogue adds to the fast-growing evidence base on the situation of children in Africa.

2SDG 1 calls for the eradication of poverty, in all its forms, for every man, woman and child.Children don’t control income, and they depend on the adults in their life to fulfill their needs. Children’s needs also change rapidly: a 3-year-old’s needs are quite different from those of an 8-year-old. This impacts heavily on the way poverty is experienced by children, even among children within the same household.A multidimensional approach to child poverty is an essential complement to standard monetary poverty measurement. Research on multidimensional poverty aims to measure the actual access of children to goods and services that are fundamental for their full development and essential for the fulfillment of their rights under the Convention on the Rights of the Child (CRC).Multiple Overlapping Deprivation Analysis (MODA) is a tool developed at UNICEF Innocenti that measures and defines multidimensional child poverty, based on the CRC. It allows us to gain a clearer picture of which dimensions of poverty children are experiencing, providing enhanced analytics to guide programming and policy responses. MODA is a practical and flexible tool that allows rigorous measurement of multidimensional child poverty in different contexts, as well as in-depth monitoring of SDG target 1.2. More than 50 national studies and 3 regional studies using MODA have been produced.MODA can act as a supportive tool in planning interventions and policies that are more effective in targeting and revealing the most deprived children. It can also provide important evidence required to plan delivery of multi-sectoral interventions through the analysis of overlaps. Finally, MODA can be adapted to critical situations such as humanitarian crises and displacement, providing us with extremely valuable information not otherwise readily available. Multiple Overlapping Deprivation Analysis (MODA) can be applied using various surveys, ranging from local to international levels, such as the Demographic and Health Survey (DHS) and Multiple Indicator Cluster Survey (MICS). DHS and MICS provide suitable data on child deprivation in low- and middle-income countries. When evaluating surveys for MODA, it is important to select dimensions and indicators that are relevant in each country setting. Here is a list of common indicators in each dimension for different age groups.  These are taken from previous MODA studies that used MICS or DHS questionnaires. But the list can be adapted for use with other surveys, such as household budget or living conditions studies. See the “MODA HOW-TO Guide” for more information about how to use this approach to multidimensional child poverty analysis.Download the MODA Brochure.
Visit the page