(4 February 2019)  Lebanon hosts a large number of Syrian refugees who fled conflict at home and often struggle to earn enough income to meet their families’ immediate basic needs. Many of these families are unable to support essential costs associated with education, causing their children to miss out on the long-term benefits of schooling in favor of short-term household needs.

In response, a child-focused cash transfer program for displaced Syrian children in Lebanon was piloted in the 2016-2017 school year. The program, known as the “No Lost Generation” or “Min Ila” (“from/to” in Arabic), was designed to reduce financial and other obstacles to children’s school attendance, including reliance on child labor, to minimize the impact of negative coping strategies on children.

“Initiating an impact evaluation to understand the effectiveness of a programme aimed at refugees is quite unique,” said Jacobus de Hoop, humanitarian policy specialist with UNICEF Innocenti. “There are many challenges to setting up a longitudinal study in this type of environment. UNICEF Lebanon has been a front-runner with this initiative.”

Min Ila was initiated by UNICEF, in partnership with the United Nations World Food Programme and in coordination with the Ministry of Education and Higher Education in Lebanon.

Syrian refugee children aged 5–14 who lived in Lebanon’s Mount Lebanon and Akkar governorates and were enrolled in a second-shift school received a basic monthly education transfer to cover a portion of the indirect costs of going to school, such as school snacks, transportation, and appropriate clothing and shoes.

Findings demonstrate that Min Ila had a positive impact on children’s food consumption, with fewer children aged 10–14 skipping a meal the previous day than children in the comparison group. More children in pilot governorates started the day with breakfast, and fewer children also went to bed hungry. Similarly, positive outcomes were found in reducing the percentage of children aged 10–14 carrying out household chores, with outstanding results in particular for girls. 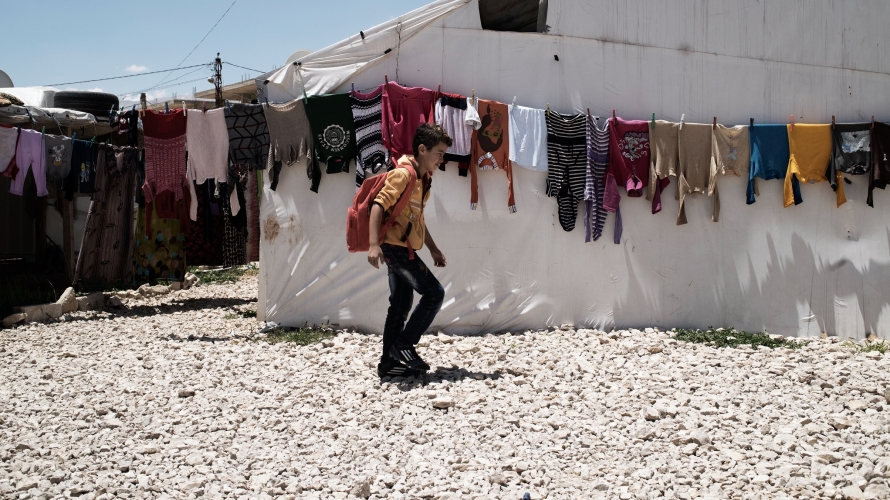 Syrian refugee Yamen, who attends school, walks past lines of laundry at an informal settlement in the Bekaa Valley, Lebanon. “I only did one year of schooling before the war. The school here is very different from school in Syria."

The non-experimental longitudinal study compares beneficiaries in the Lebanese governorates of Mount Lebanon and Akkar with households that would be eligible for the program but who are not receiving the programme because they live in the non-programme governorates of North Lebanon, South Lebanon and Nabatieh. The study uses a ‘geographic regression discontinuity’ design, in which households that are located near the border separating pilot and comparison governorates are compared with each other.

Moreover, the programme improved children’s well-being in pilot governorates as compared with children in non-Min Ila governorates. Children in pilot governorates felt more optimistic about the future, were more trusting of other people, and felt more confident and assertive. Although not statistically significant, some findingsare also suggestive of an impact in reducing depression rates, with a slightly larger impact – here again – for girls than for boys, possibly related to a drop in girls involvement in household work.

Finally, aggregate figures from the Lebanon Ministry of Education and Higher Education suggested that formal school enrollment rates of displaced Syrian children increased rapidly across the country over the period of the study. These increases appear to have been stronger in the Governorates in which Min Ila was implemented. Although the study cannot definitively attribute these increases to the program, many of the documented improvements in children’s lives are likely to have contributed to children’s experience in school. 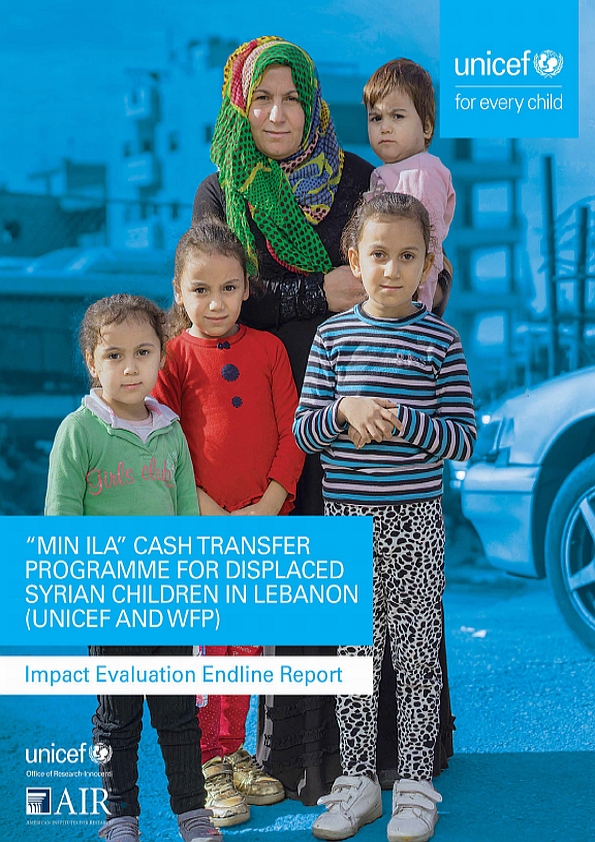 In the 2016–17 school year, the United Nations Children’s Fund (UNICEF), in partnership with the United Nations World Food Programme (WFP) and in coordination with the Ministry of Education and Higher Education (MEHE) in Lebanon, started to pilot a child-focused cash transfer programme for displaced Syrian children in Lebanon. The programme, known as the No Lost Generation (NLG) or “Min Ila” (meaning “from/to”) was designed to reduce negative coping strategies harmful to children and reduce barriers to children’s school attendance, including financial barriers and reliance on child labour. UNICEF Lebanon contracted the American Institute for Research (AIR) to help UNICEF Office of Research (OoR) design and implement an impact evaluation of the programme. The purpose of the impact evaluation, one of the first rigorous studies of a social protection programme supporting children in a complex displacement setting, is to monitor the programme’s effects on recipients and provide evidence to UNICEF, WFP, and MEHE for decisions regarding the programme’s future. This report investigates and discusses the programme’s impacts on child well-being outcomes, including food security, health, child work, child subjective well-being, enrollment, and attendance, after 1 year of programme implementation.
Read the publication

(2018-06-05) Imagine you work for UNICEF in Lebanon. Your team has the challenging task of ensuring that half a million displaced Syrian children who fled the war in their home countr ...
SUBSCRIBE TO OUR NEWSLETTER
X