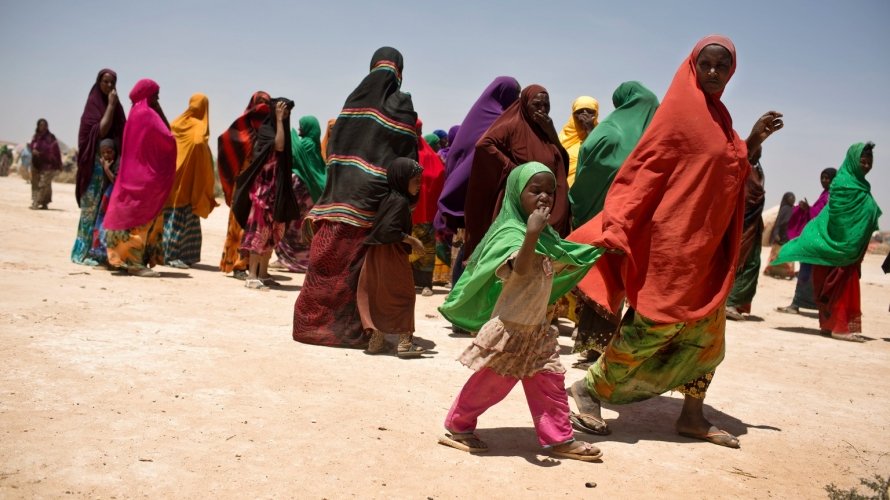 A woman and her child who have been forced to move because of drought walk towards a mobile medical unit being run in their settlement  near the town of Ainabo, Somaliland.

(3 July 2019) A new UNICEF Innocenti study about children on the move in the Horn of Africa provides critical insights into the motivations driving child migration. The study titled: “No Mother Wants Her Child to Migrate,” reveals the reasons why children move, their experiences during movement, what services are available for children on the move as well as the protective systems in place to support them.

“This report represents an important shift towards placing children’s experiences and voices at the heart of the current global focus on migration,” said Ramya Subrahmanian, Chief of Child Rights and Protection at UNICEF Innocenti. It underscores our fundamental belief that children must be treated as ‘children first’ – migrants, refugees or displaced persons second. All children, no matter what their status or location, have the right to protection as envisioned through the Convention on the Rights of the Child,” she added.

The study draws on 282 qualitative interviews and focus group discussions with children and parents on the move. Data has been uncovered on problems encountered in transit and how responses can be improved. Interviewees included internally displaced persons, refugees, migrants and returnees.

Why do children move?

Recent assessments by IOM suggest that that there are close to a million internally displaced persons in Somaliland and it is estimated that approximately 450,000 of this number are children. In Somaliland, children are moving from rural to urban areas in response to poverty, persecution, disruption of families and/or human rights abuses, war and environmental conditions, such as devastating drought. 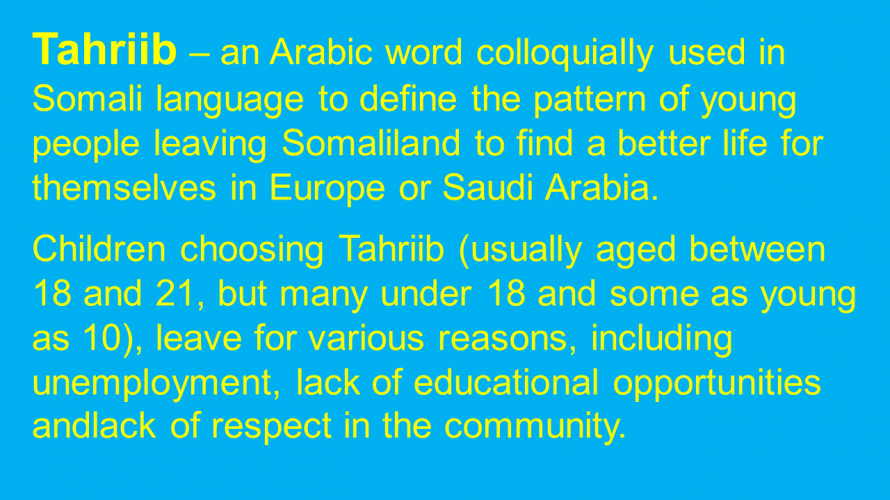 Other children choose outward migration, usually to Europe, in order to escape unemployment and lack of access to education. Tahriib, is an Arabic term describing the pattern of young people on the move in search of a better life. Children leave for various reasons and usually without the consent or knowledge of their parents.

How do children move?

The study found that the movement of children and young people is usually facilitated by smugglers who are identified through their networks of friends who have either undertaken the journey or know someone who has. Technology and social networks help provide information to children who want to move.  The research revealed that smugglers and traffickers operate on a ‘go now, pay later’ basis. Children endure harsh conditions, are often denied basic provisions (such as food and water), travel long distances by foot or by crowded cars and boats.

All children on the move in Somaliland, regardless of their particular struggles, face significant difficulties. The study reveals children on the move are likely to be poor, undocumented and unable to access education or other services. They are also more likely to be victims of violent crime, including sexual and gender-based violence (GBV), abuse and exploitation - before, during and after they move.  Those that make a move are likely to be held for ransom, beaten and/or abused to compel their relatives to pay.  If children leave without parental permission, which is often the case, they can be arrested by Somaliland authorities internally and by immigration authorities abroad. Even once they’ve reached their destination children face indefinite detention, long immigration or asylum procedures and discrimination.

“There is a significant need for further research to unpack this diversity and complexity in order to better understand how children on the move can be effectively protected from violence, harm and exploitation,” Subrahmanian said.

“UNICEF Innocenti is now expanding the research programme to more countries in the Horn of Africa. We have commenced multi-country quantitative and qualitative studies which will identify the needs and experiences of children, identify the gaps they face in terms of services and work to identify programming strategies that can address these gaps. We are working closely with country and regional offices to ensure that the research supports these efforts in a concrete and meaningful way,” she added. 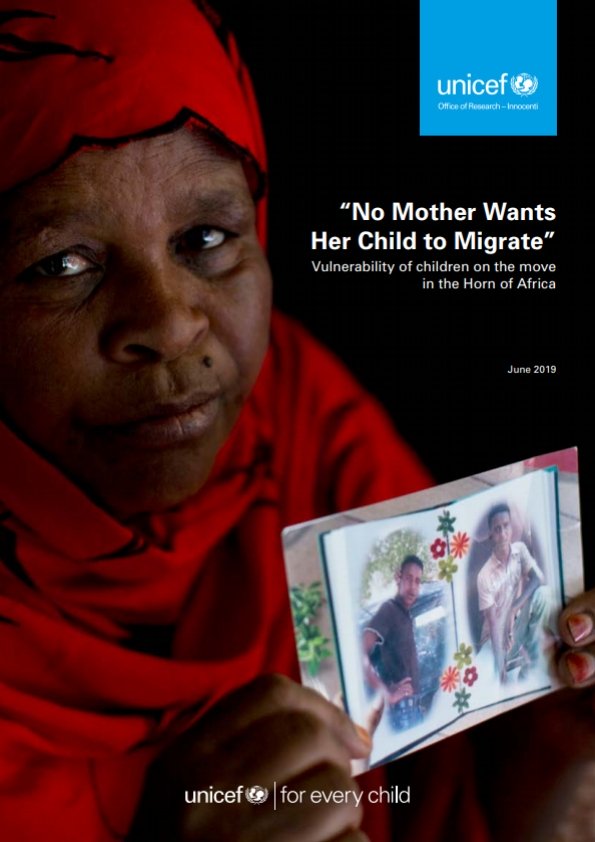 Children are moving on an enormous scale in the Horn of Africa. The report highlights how children’s movement is driven by different motivations, exposes children to different forms of harm, and presents multiple barriers to accessing services. As elsewhere in the world, many people in the Horn of Africa are forced or pushed to move by unaddressed vulnerabilities, including poverty, persecution, disruption of their families or exposure to human rights abuses. Once they move, vulnerabilities can be exacerbated by the disruption of social structures and coping mechanisms that would otherwise have a protective effect. Being on the move can disrupt access to services as individuals may be unaware of where to turn in a new location and service providers may, in turn, have difficulty accessing them. These dangers become acute for children, especially those travelling without families. This report is the first in a series of studies in the Horn of Africa aimed at building knowledge to improve Unicef’s programmes which support children on the move. This first qualitative study provides a better understanding of the experiences of these children. It draws on 282 individual interviews and focus group discussions with children and parents on the move, including internally displaced persons, refugees, migrants and returnees. Within each group, the researchers examined why children move and the problems they face when they do. The researchers also examined what structures exist to protect children and whether they are effectively reaching children on the move and responding to the threats these children face. The report also provides recommendations for strengthening child protection systems on the ground.
Read the publication

(2019-07-03) Hargeisa city is a fast-growing urban environment that remains safe, unlike many parts of the region. Yet young people living in the city face a myriad of challenges. Une ...