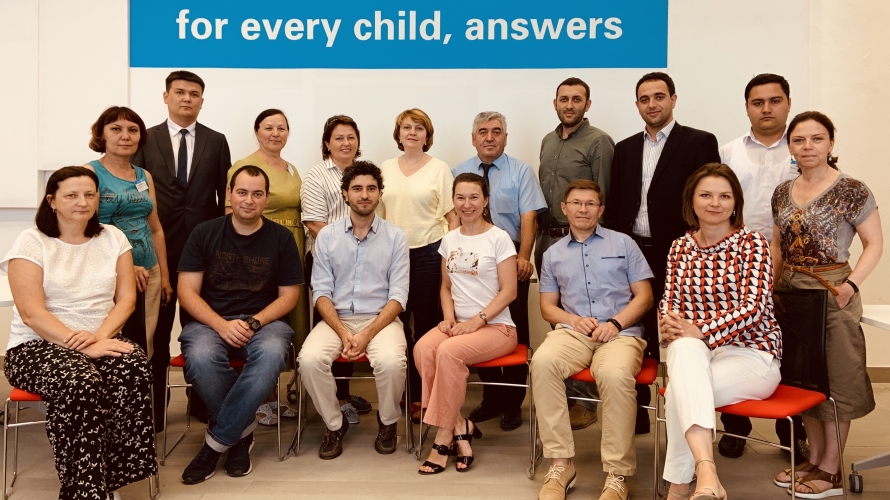 (11 July 2019) How can we measure child poverty in the unique contexts of Eastern Europe and Central Asia?

“The training was unique in that it was bilingual (English/Russian), with lecture slides in both languages and (consecutive) two-way interpretation by a technical expert. Several participants told me how much they’ve enjoyed hearing the same thing in two languages,” Chzhen said about the training.

“I’ve never seen anything like this with university students or at academic conferences… seeing all 14 participants fully engaged at all times,” Chzhen added. “Teaching a three-day course helped me organize everything in my mind too. It’s been a great way for me to cap off 6 years of child poverty research at UNICEF.”

“I hope participants will go back to their countries and start pushing towards integrating the traditional monetary poverty measurements with non-monetary poverty ones,” said Carraro. “And, in particular, I hope they will start looking at child poverty from a different perspective, putting, from now, more emphasis on the importance of using a child-centric approach to measure child poverty,” mentioning that the child-centric approach is better aligned with UNICEF’s “For every child” brand mission.

Maria Zlatareva-Pernishka, a Social Policy Specialist with UNICEF Bulgaria, added, “for me personally, this training was very timely as our country office is preparing to engage in the development of the strategic documents for the next EU programming period and to support and advise the government with the preparation and implementation of the future Child Guarantee.”

Uladzimir Valetka, Monitoring and Evaluation Specialist with UNICEF Belarus added that "the training represents a great example of [UNICEF] Innocenti’s preparedness to support transforming insights from data into action reacting very quickly to the countries’ demand. Belarus has expressed an idea of the training and now our Statistical Committee will be using this state of the art knowledge to develop an official methodology for measuring multidimensional child poverty to monitor SDG commitments. It’s amazing! To me it’s a solid illustration of UNICEF’s comparative advantage on the data front," he said. 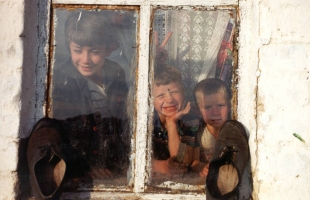 The countries of Central and Eastern Europe and the Commonwealth of Independent States (CEE/CIS) have experienced systemic and dramatic change since 1989 - change that has had a direct impact on the lives of ordinary people and their children. The fall of the Berlin Wall in 1989, the collapse of the Soviet Union in 1991 and the beginning of the transition from centrally planned to market economies, catapulted the region into a new era of political, economic and social reform. While in some respects, most of the economic and social reforms introduced after 1989 were unavoidable, desirable and indispensable, the social and political costs were far greater than anticipated. At the onset of the transition, initial hopes for rapid transformation and economic prosperity were quickly tempered by a marked and enduring decline in GDP, employment and family incomes, and more generally by the deterioration of many social indicators. An entire generation of children has been particularly vulnerable in this process of systemic change, yet risked being overlooked in the political and social debate, as the overwhelming focus of national policy makers and international organizations centered on economic reforms, with less attention paid to monitoring and addressing their social costs, in particular those that affect children. After two decades, in much of CEE/CIS, transition remains open-ended. A decade of economic growth since the late 1990s, and before the onset of the global economic crisis in 2008-2009, has brought about improvments in almost all indicators of child well-being on average, but it has also made inequality more visible - across the region, as well as within countries: with the improvements in well-being on average, stark contrasts emerge between those who have benefitted from transition and the children who have been left behind. To assess the situation and vulnerabilities of children in the transition process and to give them visibility in the policy debate, in 1992 UNICEF created a monitoring project at the UNICEF Innocenti Research Centre to gather and analyse relevant data on the changes that were taking place in social conditions and the public policies affecting families. Known as the MONEE Project, the aim was to use the most authoritative data available to illustrate the human impact of the transition, advocating for measures to protect children from economic and social fallout and ensure that they share in the benefits of economic growth. The project has grown in scale since 1992, when it focused solely on Central and Eastern Europe, to cover all the countries of Central Europe and Baltic States, South Eastern Europe, Western CIS, Caucasus and Central Asia. The MONEE project was based at UNICEF IRC from 1992 to 2009, when it was transferred to the UNICEF Regional Office for CEE/CIS in Geneva. A pivotal role in the MONEE project is played by the TransMONEE database, an annually updated statistical database containing information on social and economic indicators relevant to the welfare of children, young people and women in the CEE/CIS countries. Most of the data are obtained through direct collaboration with the National Statistical Offices of the countries in the region. The annually collected data contributed to a long list of UNICEF IRC publications and papers over the period 1992-2009, and also to studies and publications by the UNICEF Regional Office for CEE/CIS, other UNICEF offices, as well as other organizations, universities and research centres. This section brings together the entire range of research and publications produced by UNICEF IRC for the MONEE project since its initiation to 2009, including the Regional Monitoring Report series (1993-2001), the Innocenti Social Monitor series (2002-2009), the TransMONEE features (2005 and 2007) and several Innocenti Working Papers, Innocenti Insights and Country Analytical Reports. The TransMONEE database has been managed by the UNICEF Regional Office for Central and Eastern Europe and the Commonwealth of Independent States since early 2009. The statistical data, as well as new research based on the TransMONEE data can be found on the Regional Office website.
Read the article 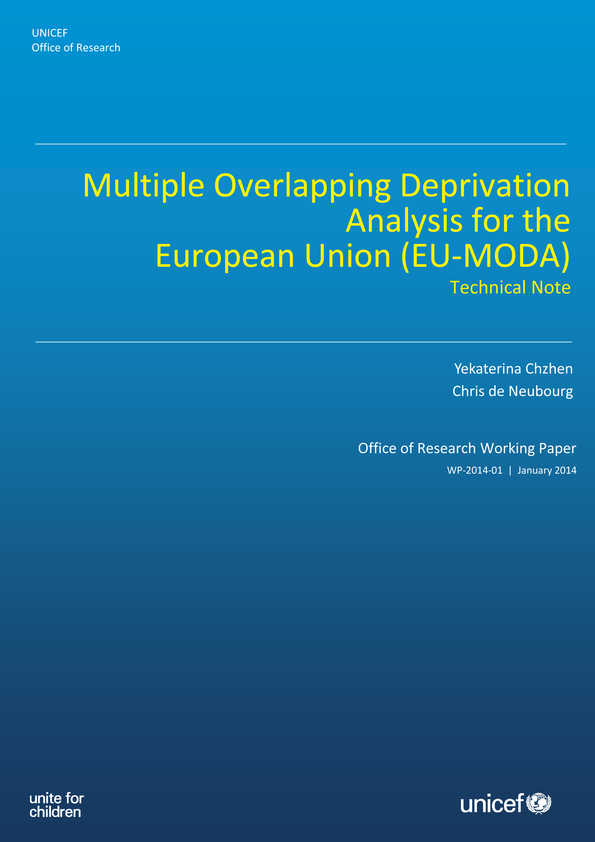 The Multiple Overlapping Deprivation Analysis for the European Union (EU-MODA) compares the material well-being of children across the EU member states, using data from the child material deprivation module of the European Union Statistics on Income and Living Conditions (EU-SILC) 2009.
Read the publication 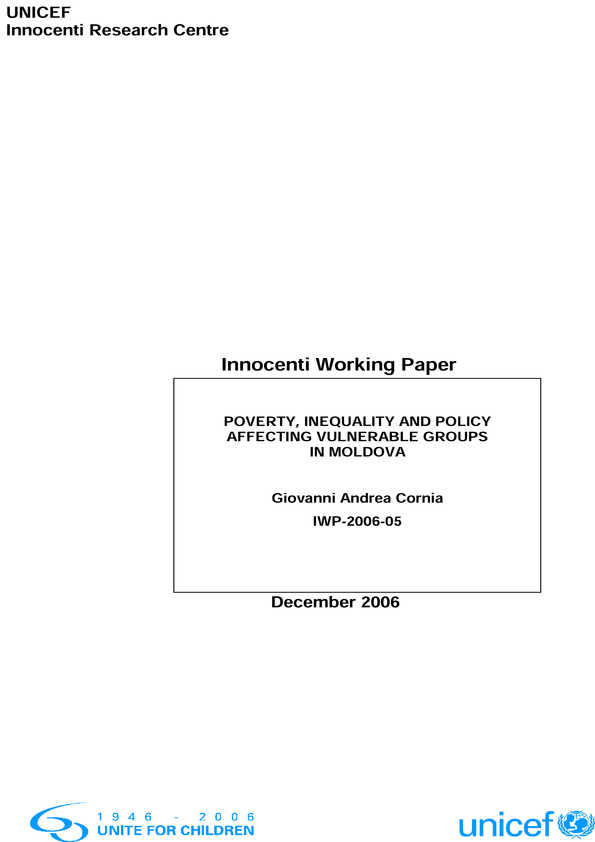 This paper analyzes the changes that have intervened in the field of income poverty and human poverty since the onset of the transition in Moldova. With a biblical contraction of GDP, a fast rise in inequality, a drop in social expenditure and a weakening of civil society, most indicators of income poverty and human poverty deteriorated sharply after 1991. A clear improvement is evident since 2001, but most indicators of well-being still have to recover their pre-transition levels.
Read the publication

Despite widespread concern about the living standards of children, the research of the last decade has confirmed that there remain wide variations in the extent of child poverty across countries at otherwise similar levels of development.
Read the publication