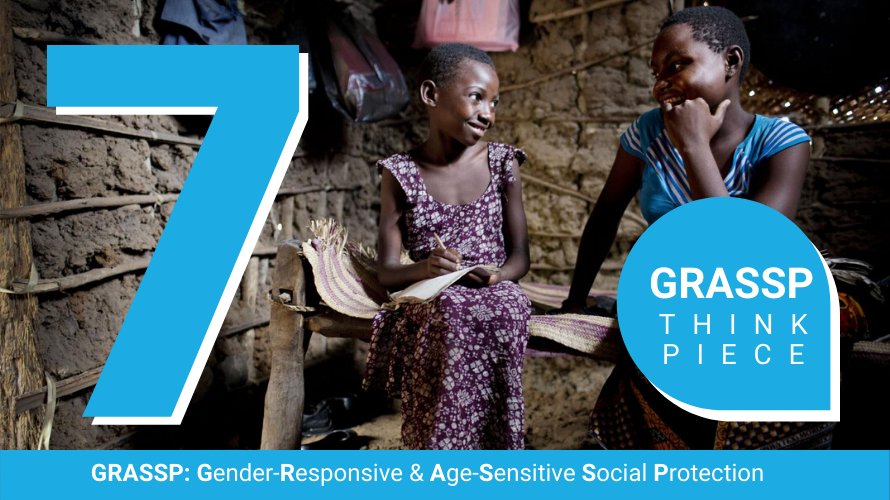 Disclaimer: The views expressed within this Think Piece are those of the author(s)and do not necessarily represent the views of UNICEF. This Think Piece has not been edited to official publication standards and UNICEF accepts no responsibility for errors.

Safety net programmes around the world have proven positive impacts for gender equality (GE) and women’s economic empowerment (WEE), including (but not limited to): i) enabling women’s access to small productive assets such as livestock, as well as (in the long term)  assets like land via access to credit; ii) promoting access to both formal and informal credit for both men and women, as the schemes’ regular payments may be considered a loan guarantee; iii) in some cases, cash transfers to female-headed households lead to larger economic gains, because such households invest more in economic assets; and iv) increasing women’s decision-making power and choices, including those on marriage and fertility, and reducing physical abuse by male partners, among other benefits.

Achieving GE and WEE through social protection programmes is essential not only as a right but also as gateway to realizing broader long-term development goals including education, health, and other social and economic strategies for the women, households, and community at large. Gender equality in this case refers to the equal rights, responsibilities, and opportunities of women, men, girls, and boys. Equality does not mean that women and men will become the same but rather that women’s and men’s rights, responsibilities, and opportunities will not depend on whether they are born male or female. Women’s economic empowerment in this paper is defined in terms of: i) women’s ability to succeed and advance economically through acquiring the right skills and resources to compete in markets and gain equal access to economic opportunities; and ii) women’s power to make and act on economic decisions, which goes hand-in-hand with control of resources and benefit from profits.

Tanzania is no exception. Despite the government’s efforts, the prevailing cultural and social norms remain a central cause for disproportionately disadvantaging women and creating multiple constraints for them, including: limited ownership, access to, and control of long-term assets, resources and services; labour market exclusion; high levels of illiteracy and numeracy incapability; limited access to income and decision making over expenditures; high fertility rates and high unmet needs for contraception and sexual and reproductive health education; overburdened with unpaid domestic work; and limited access to financial services; among others. Social norms continue to play a big role in determining bargaining power within a household. Limited control over resources and assets and their lack of power and autonomy does not only constrain women’s wellbeing, but the wellbeing of their households and the community as a whole. The Productive Social Safety Net (PSSN) Programme implemented through a designated government agency, Tanzania Social Action Fund (TASAF), has made a historical and exemplary step in address gender equality and women’s economic empowerment. It presents one of the best practices worth learning from in promoting and moving GE/WEE forward.

What can we learn from the Productive Social Safety Net Programme?

When piloted, the PSSN (as Community-Based Conditional Cash Transfer, 2009) programme cash was paid to the heads of household, most of whom are husbands/male partners. This process was changed after cases emerged of inappropriate spending of CCT funds by male recipients, principally on alcohol and mistresses. Learning from successful social protection programmes as Progresa/Oportunidades in Mexico, Bolsa Familia in Brazil, and Viet Nam among others, TASAF decided that women or wives would start receiving and managing the cash benefits on behalf of the household. To date, 83% of PSSN cash recipients are women. This was an important initiative and a turning point in the journey to break through a very strong negative gender norm.

It must be stressed however, that simply making women the formal recipients of cash transfers does not necessarily empower them. As Bastagli et al point out, even if women are the formal recipients of transfers, gender-based power dynamics in the household may determine who decides how to spend the income. An important finding from the evidence, is that where social norms constrain women’s control over resources, they may not benefit as much as men from traditional transfers or grants.

The evidence presented heavily draws from UNDP’s (Social Protection through a Gender Lens: A Gender Assessment of Tanzania’s Productive Social Safety Nets, 2018) assessment of gender mainstreaming within PSSN, which documented both positive and unintended negative results, including but not limited to the following:

Generally, paying the programme cash to women has helped leverage the rational use of the programme benefits on intended activities and minimized intra-household conflicts resulting from male domination and control of resources. The minimized conflict has largely been due to better availability of programme resources to cover basic expenses and due to compliance requirements for fear of losing programme benefits.

Acceptance of women & girls as transfer beneficiaries: The strategy of targeting women as recipients of cash benefits has become widely accepted and perceived to benefit the whole household. Targeting women contributed to increasing women’s standing and respect within the community and households. However, this may not necessarily improve gender-based power dynamics or lead to greater GE/WEE because social norms still clearly define the boundaries for women’s decision-making space.

Many women participate in local PSSN decision-making: There was a strong representation of women in the Community Management Committees (CMC) (half-female, half-male) which are responsible for managing the implementation and monitoring of the PSSN programme at the village level. This appears to have  enabled women to raise their voices and air their views and concerns.

UNICEF further reported that PSSN increased contraceptive knowledge among females (but not males): however it had no impact on contraceptive use and there were no impacts on fertility, which supports existing evidence that cash transfer programmes do not increase fertility but the existing high fertility rates have potential for negative effects on social protection programmes.

Following these findings, in 2018 TASAF and development partners committed to develop “gender provisions linked to all components of the programme and prepare a specific action plan to include in the PSSN II design document”, the Gender Action Plan (GAP) (TASAF AIDE MEMOIRE April 16-27, 2018: article 41). The already developed GAP flags key issues in the design and implementation of the PSSN II from the perspective of women’s economic empowerment, drawing on experience and evidence from PSSN I and global lessons. It is anchored in the national Women and Gender Development Policy (2000) and the National Strategy for Gender Development (2008), aiming to ensure the inclusion of gender dimensions in all government policies, programmes, and strategies. Among the key action points of the GAP include:

Much can be learned from TASAF’s exemplary journey in deliberately promoting GE/WEE for PSSN beneficiaries to date. This strongly coincides with the global experience suggesting that social protection programmes can accelerate GE and WEE through expanding opportunities for paid work, boosting ownership of productive assets, enhancing the control over incomes, increasing social networks, and raising awareness of women’s rights. Such gains do not flow automatically. The GE/WEE-responsive design of PSSN II and implementation strategies, together with the country context, will affect the extent to which these potential gains can be realized in practice.

A gender norms lens is a major criterion for the design of any sustainable and gender-responsive social protection programme. As Newton argues, a gender lens is not an optional add-on, but an integral part of social protection policy and programming if it is to achieve long-term sustainable change. SP programmes should set criteria which are geared towards breaking through any negative gender norms, including directing benefits to women in the first place. As such, a careful review of the conditionalities required for cash transfers, public works and livelihoods, as well as strategies for balancing men and women’s workload, remain important.

Capacity strengthening at all levels, as wellas  community sensitization and awareness to the role of both men and women in promoting gender equality and women’s economic empowerment, are both key. This also means social protection programmes must budget for regular trainings, workshops, dialogues, and the like, inclusive to both men and women to fulfil this goal.

Commitment and priority in financing gender-responsive social protection is key and most important. Governments should mobilise and equitably allocate resources to ensure effective implementation and maximum programme outcomes in both quality and quantity. This includes expanding domestic revenues through progressive taxes and other alternative financing mechanisms, such as increasing taxes on harmful products like  cigarettes, alcohol, sugars, petroleum and investing it on social protection. Learnings from such initiatives in Philippines, Bolivia, Zambia, Egypt can be adopted. 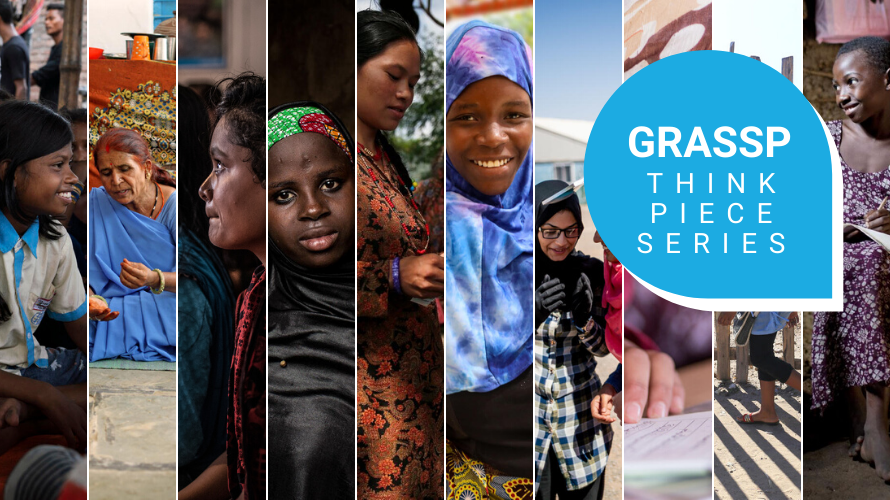 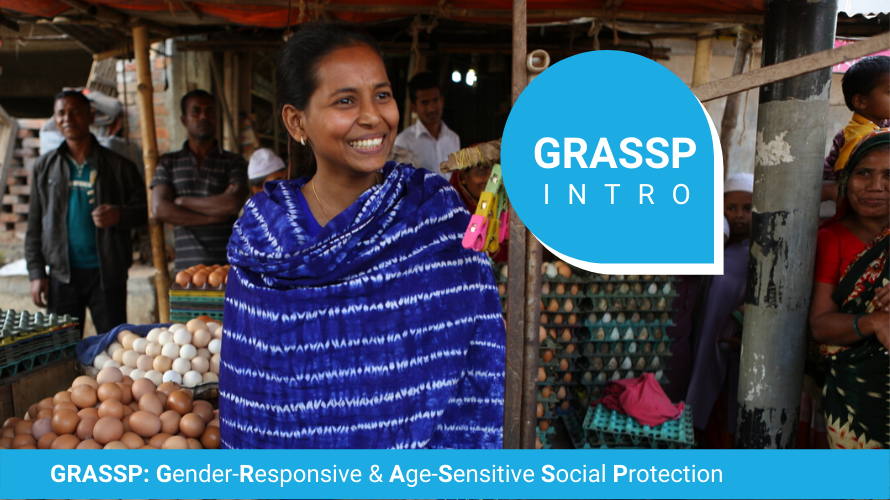 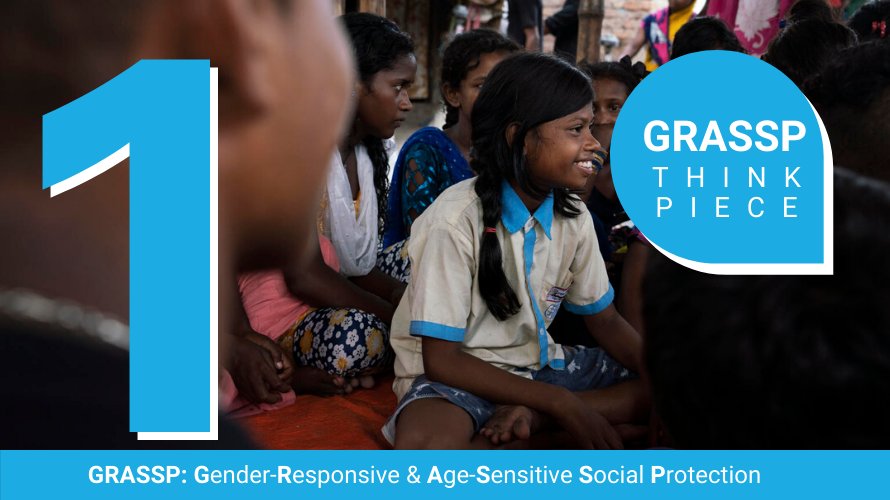 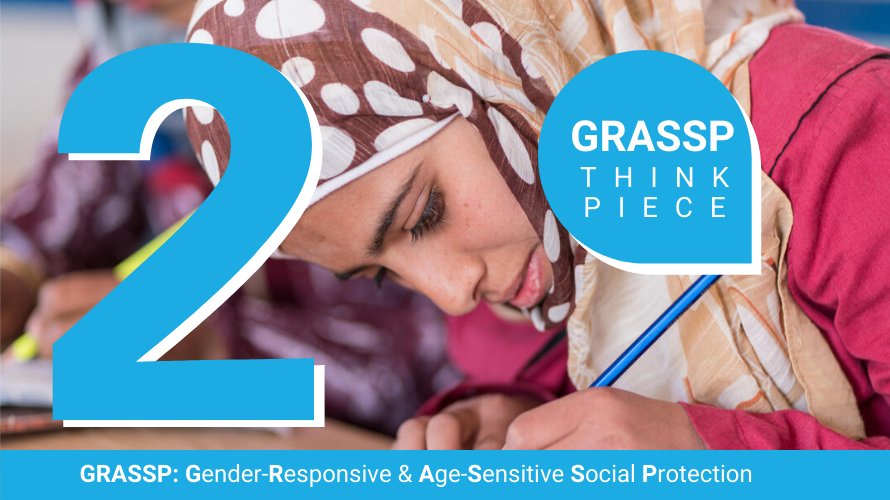 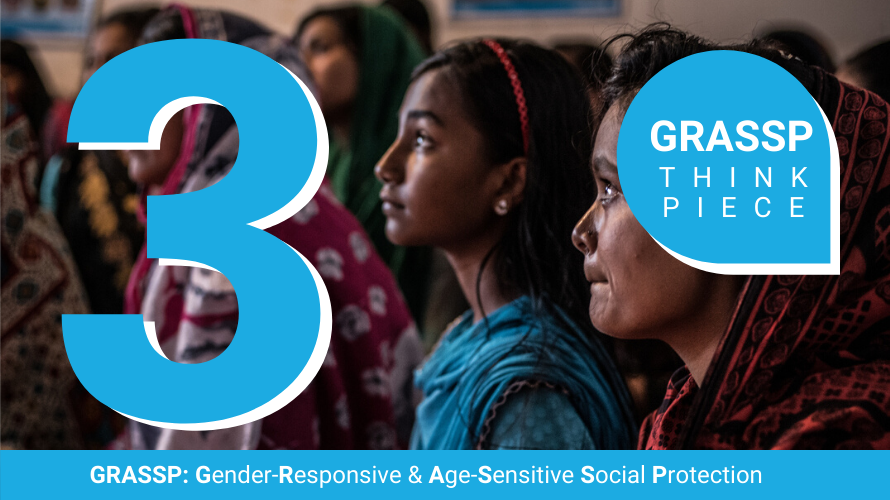 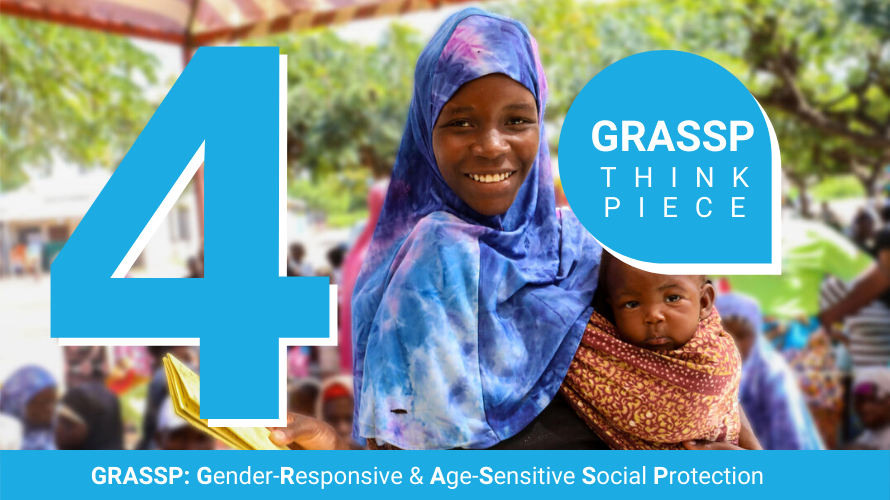 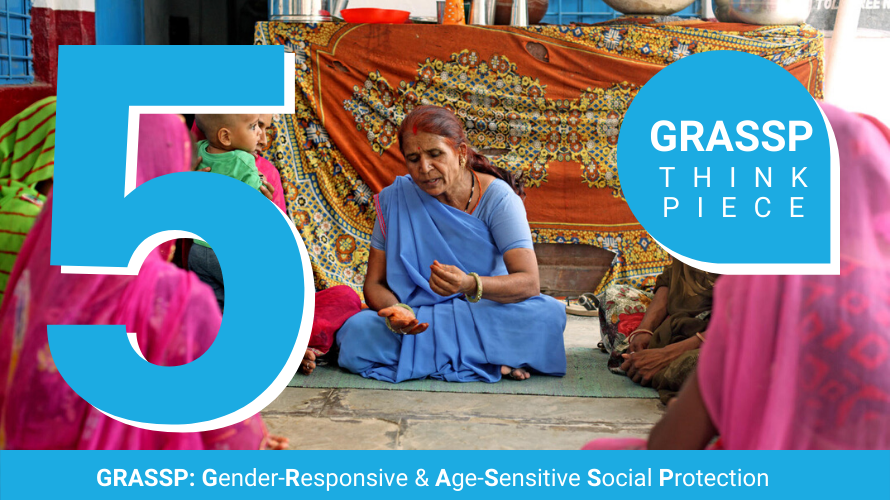 Gendering the design and implementation of MGNREGA 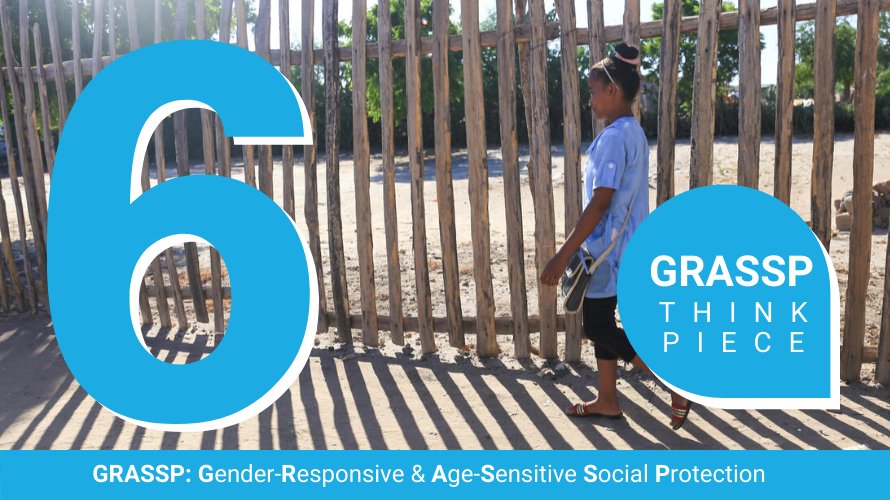 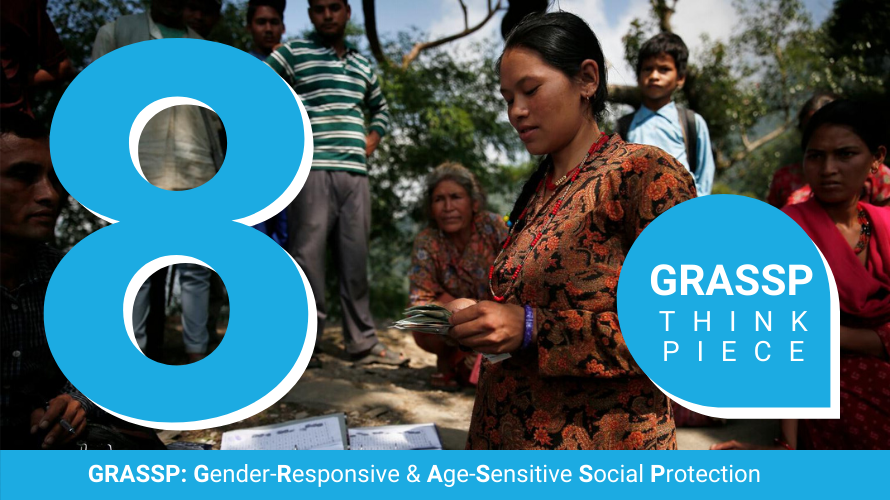 Gender and social protection in South Asia. An assessment of non-contributory programmes 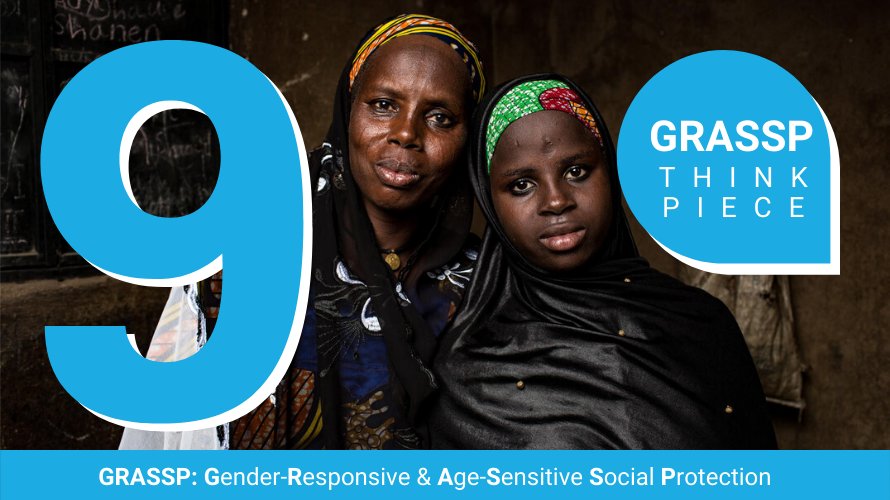 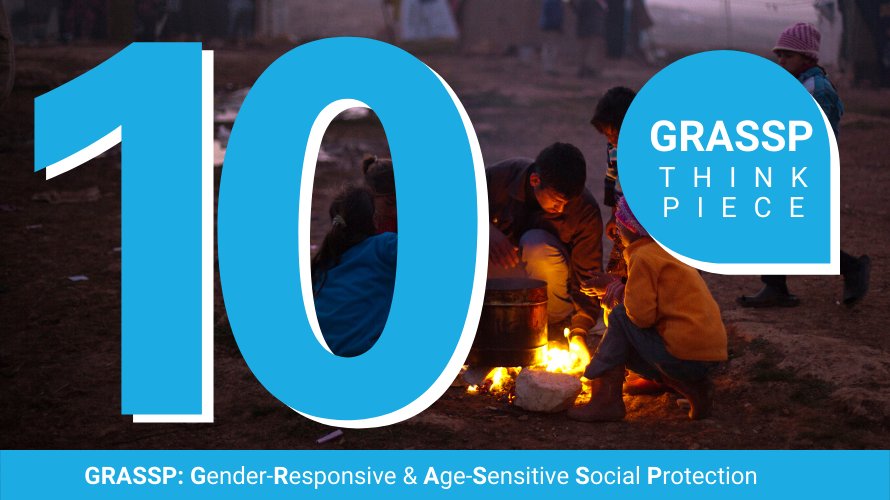 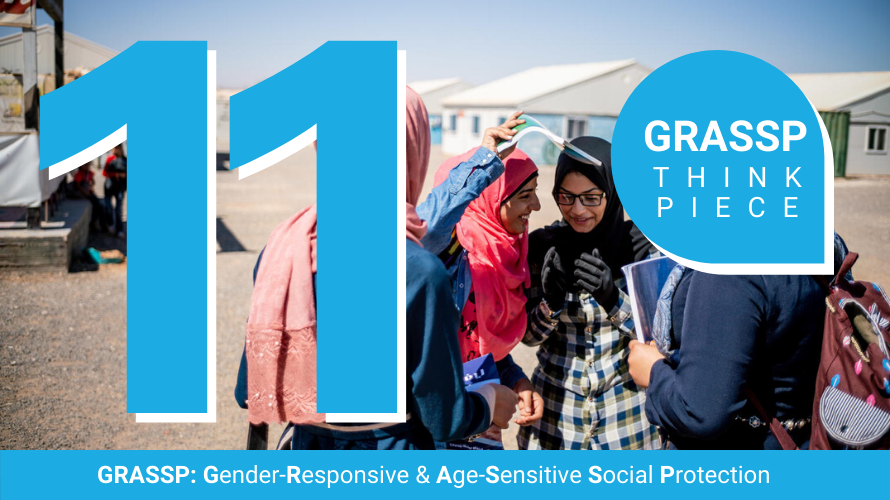 Social protection in humanitarian contexts: how can programming respond to adolescent- and gender-specific vulnerabilities and promote young people’s resilience? 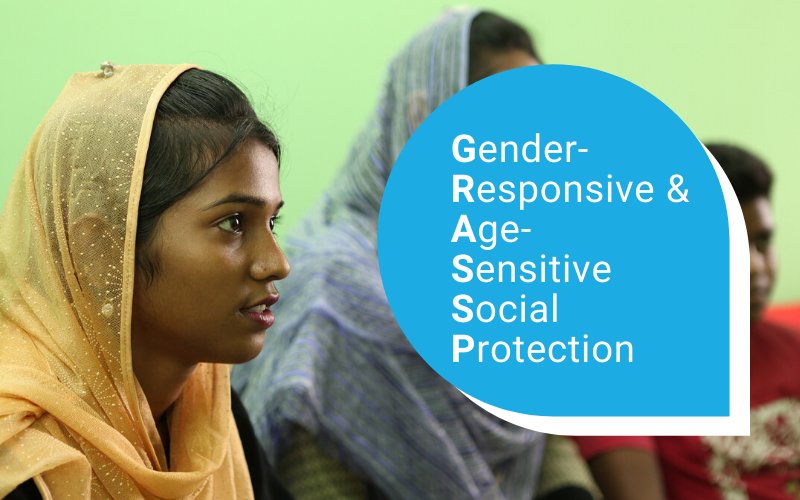 Gender and age play a disproportionately large role in how people experience risks, vulnerabilities, and opportunities. A new four-year research programme to understand the intersections of gender inequalities and norms with ages and stages in the life course mean women and girls are at a heightened risk of poverty.