How to survive coronavirus: Italy shows the world 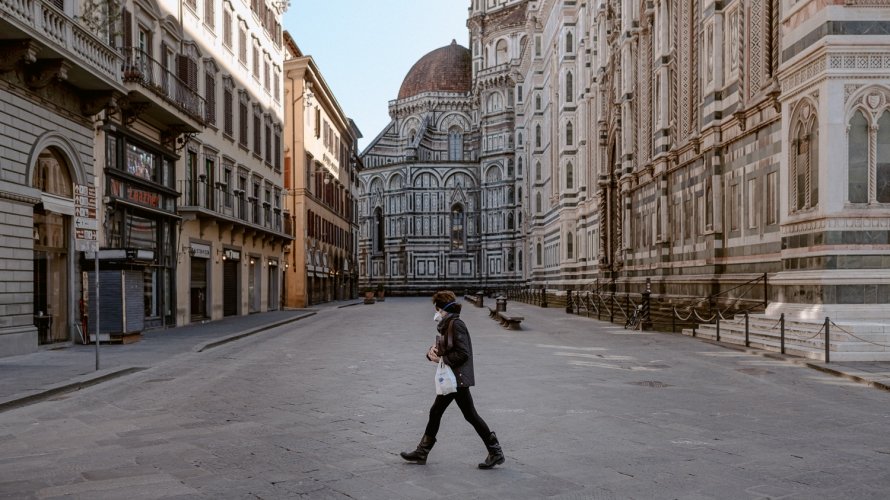 A lone pedestrian in Piazza Del Duomo, a space normally crowded with thousands of visitors.

(18 March 2020) First there was racial distancing – locals taking a wide berth around Chinese tourists – then came the jokes, Italians having a good time when the world thought they were in the midst of a plague. Locals scoffed when one after the next foreign universities and colleges in Florence closed – “it’s just like the flu,” many said. Others cringed at “hysterical” headlines about their beloved country. That was late February when there were only a handful of Coronavirus cases in northern Italy.

Then, like a bolt out of the blue, it became deadly serious. It was as if a war had been declared and every day the front-line shifted. All schools and universities closed, more and more of us worked from home as the quarantined area expanded and the cases of infections shot up:

Last weekend, red zones turned orange as the closed-off area expanded from 50,000 to 16 million people in the north. Across the country, places of art and beauty joined places of learning in lock down. Yet Sunday the Tuscan spring sun shone gently, and Florentines poured into the streets wandering across the Ponte Vecchio licking gelato, hanging out around Palazzo Pitti in bars and restaurants. It was as if, once again, they could reclaim their magnificent city. Some reminisced nostalgically that it was like the time in their youth before the tourists came, before Airbnb made them foreigners in their own city. They basked in the warmth of the empty streets.

Then last Monday around midnight we learnt that Italy was to become the first country in the world to lockdown entirely. Stay at home, stay apart (minimum one meter) came the strict government decree. Nothing would be open except food stores and pharmacies.

Silence. Emptiness. Order. This was not Wuhan. This was not China. This was vibrant bella Italia. Imagine Italy without bars, cars, restaurants, museums, street singing and church bells ringing. – never on the hour, (why would they, they’re not German. . .)

This virus has plucked the very social soul of Italians – a society founded on ‘la famiglia’, la nona, love of the good life – ‘La Dolce Vita’ – genuinely, generous and warm people. You’re greeted with a ‘ciao bella’, you’re invited for the best coffee in the world for one euro; an apero on the terrazza

In normal times, the area around UNICEF Office of Research - Innocenti near from the iconic Duomo, is thronging with people, locals and tourists; you can’t ride a bike and often you cannot sleep from the noise from the bars, of people having far too much fun. 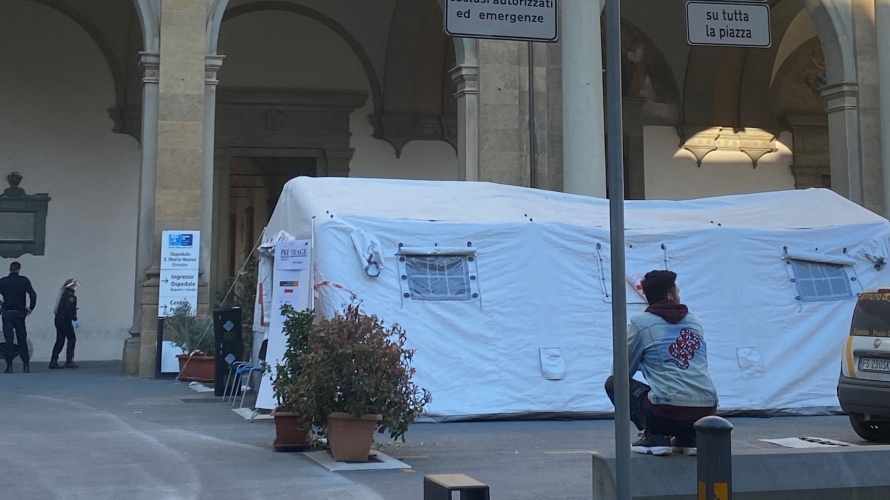 Triage tent set up outside the Santa Maria Nuova hospital in Florence.

But these are not normal times – every day we read heart wrenching stories of grannies not being able to hug their grandchildren and children. for the last time as the virus takes them ‘as if they were drowning’ wrote one doctor. A steel-cold video call goodbye marks their end. We see pictures of nurses collapsed with their masks still on. And every day the infections and deaths go up and up.

The designer boot-shape of Italy is taking on a new grim style with red measle-like dots spreading like a horrible rash every day, scarring the beautiful map as the figures rise.

As a journalist and UN/UNICEF worker I’ve covered disasters around the world -  civil unrest, South Africa’s turbulent apartheid years, South Asia’s terrorist wars, the migration crisis in Europe. This is my second ‘biological war’ – I covered the Ebola crisis in Liberia in 2014 and for those of us who were there, it is a nightmare from which we never fully awoke.

These experiences have shaped and enriched my life in unimaginable ways, a learning that only comes from living. But they have also shattered a base for family and firm friendships. Ironically, when I had the opportunity to come and work in Florence and fell in love with the place, I decided I could not do another field post and stayed on. Who would have thought it would have come to this, here.

Crises bring out the best and the worst in humanity. Crazy panic-buying, stocking up on toilet paper, fighting over a bottle of sanitizer. Here, there is little sign of that but a tangible sense of ‘we’re in this together’ - keeping one meter apart in the fully stocked grocery stores, no hugs, no handshakes, no apero.  Somber solidarity – Italian children across the country have been bravely hanging signs from their windows and online saying “Andrà tutto bene/Everything will be alright”. 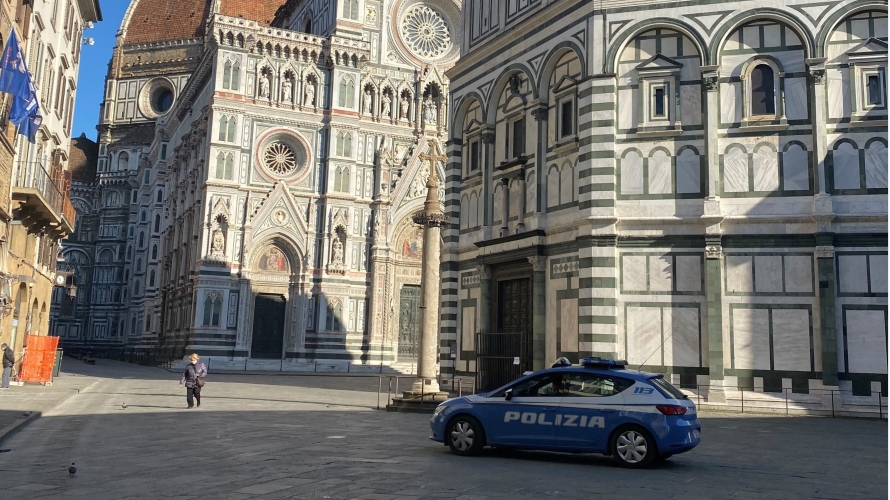 On Friday 13 March, after a week that utterly altered life as we know it in Italy, I held a digital drinks party as much of Italy threw open their windows, came out onto their balconies to sing their hearts out, bang pans and drums and shout out in defiance, evoking the same spirit of the Italian resistance to fascism, against the cursed virus.

This is not just about a medical response – tracing, testing, treating, hand washing, social distancing - are all lifesaving measures. But this is not a stupid virus like Ebola that destroys off most of its hosts. This virus hops about unseen and unprejudiced, from the young to the old, killing the elderly off first. You could be a super-spreader, you could be asymptomatic, be well but could still infect others. Save the masks and tests for those in real need.

This is about trust in each other that we will do the right thing collectively. Trust in a public health system to deliver; trust in knowing the food stores and pharmacies will remain open, trust in the kindness of strangers. It is also about mental health of those in lock down, and the Italian Air Force video of a flyover (video at right) with Pavarotti singing, Nessun Dorma, released at the weekend Italian air force display for Italy's people (BBC), lifted the collective spirits of the lonely, and alone and families across the nation.

Many other countries are fortunate that they now have some time to learn from the Italians. They have to be prepared to help, not to hoard. To change - like Italians have had to - to obey orders. Social distancing here is like telling Italians not to eat pasta. But they know it is for the greater good. You are only as well as the next person.

Life as we know it in Italy has changed utterly but La Dolce Vita will rise again, bars and churches will fill again and friends of Florence will, one day, return. This I know.

Sarah Crowe is a former international journalist who has worked for the UN/UNICEF for the past 16 years and is currently Public Affairs Manager at UNICEF Office of Research in Florence.