How offenders use the web in Brazil to spread child sexual abuse material. Findings from ongoing evidence-based research. 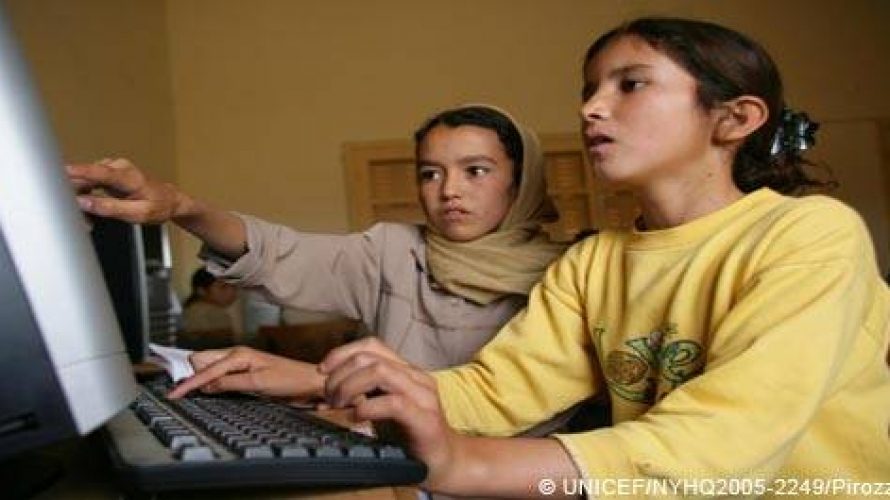 © UNICEF/NYHQ2005-2249/Giacomo Pirozzi
Morocco 2005 - Girls attend a computer class at a UNICEF-assisted development centre in the rural village of Ajmou in Meknes-Tafilalet Region. UNICEF provides the centre with books, computers and related supplies

Brazil has a population of 200 million people with 79 million Internet users (39.5% of the population). The Internet is growing fast and projections indicate that in 5 years Brazil will be the world's fourth largest population with regular Internet access.

Today 14% of Brazilian Internet users are children between 6 and 12 years old. This rate will increase as the Brazilian Government invests USD 8.3 billion in a national broadband plan to connect 65,000 public schools and 40 million families by 2014. Brazil is also the sixth market for U.S. based companies like Google and Microsoft, which generate billions of U.S. dollars in revenues in the country each year.

As it is happening globally use of the Internet in Brazil reflects the society, generates a lot of new opportunities and also some risks, especially for children. Economic and social divides, especially in developing countries such as Brazil, are also an essential part of each country Internet use profile. Cultural and ethical values, local rules and legislation, public policies and users'literacy also contribute to define the image reflected in the mirror. However, when we look at international figures related to child sexual abuse material on the web and compare them with the evidence from Brazil we see that something very important is missing in our understanding of how offenders in developing countries such as Brazil and India are using the web to spread this material.

Internet Watch Foundation (IWF), the renowned UK Internet hotline, reported 1 in late 2010 that only 0.07% of the worldwide child sexual abuse content available on the Internet is hosted in South American countries, with 82,97% hosted in North America and Europe (including Russia). This suggests that the proliferation of child sexual abuse material through the web is a major concern in North America and in European countries, where the biggest data centers are located, and is not a concern for countries like Brazil or India. The USG, the European Commission and the private sector invest millions of Dollars and Euros each year to support the operation of hotlines in developed countries, while there is still a lack of support in many developing countries. The INHOPE Statistics for the period September 2005 to June 2010 show that 37 Internet Hotlines in 35 countries (27 in Europe) received and processed an average of 60,200 unique reports per month; 66% of these (approx. 26,223 URLs) contained child sexual abuse material. 2 There are no published figures for Brazil or other developing countries in South America, Africa, Middle East or the emerging countries of Asia. To generate these figures IWF and all INHOPE members use the same criteria based on the geographical location (country or continent) of the server on which the content appeared to be hosted at the time of assessment.

However, this major international criterion for measuring the proliferation of child sexual abuse material on the web is limited and can generate misinterpretation, especially for policy makers and law enforcement agencies. In Brazil we are developing an evidence-based research focus on child sexual abuse on social networking sites and other user generated content services largely used by Brazilians. The first findings show, for example, that Brazilian offenders prefer to use international service providers (ISPs) - whose servers are not hosted in Brazil - to disseminate a large amount of child sexual abuse material on the web and also to commit other sexual crimes against children in Brazil, such as grooming and harassment. All this is done through Internet connections on Brazilian territory, and should be prosecuted in Brazil, even if the data are located abroad. The lack of international cooperation standards to deal with cross-border crimes against children committed through the Internet is generating a huge debate about ISP policies and the enforcement of local laws for each jurisdiction. 3, 4 The lack of accountability and public scrutiny also explain why much issues are usually discussed behind the doors of the private sector.
A negative image for advertisers and financial losses following media scandals 5 should be considered as a warning light for policy makers to pay more attention to what is going on outside the developed world and the need to work together with local organizations to address these issues in the emergent markets.

The map visualization below was generated during our research with data disclosed by Google's office in São Paulo to the Brazilian Senate Inquiry Committee on Child Sexual Abuse on the Internet in 2008. SaferNet Brazil was the only civil society organization formally invited by the Senate to sit on this Committee where, for 3 years (2008-2010), we have worked together with Federal and State Prosecutors, Federal police officers, parliamentarians and decision makers from both public and private sectors. During this time the Committee obtained from ISPs and Telecom operators hundreds of gigabytes of data regarding child sexual abuse on the web in Brazil. Since then we have been working on data mining and visualization in order to generate new knowledge and indicators to understand how those crimes affect a developing country like Brazil, and the real picture which does not emerge from the map generated in accordance with established criteria. We are also exploring new possibilities for measuring this phenomenon, including new metrics and data visualization, and expect to publish them in fall semester 2012.
Interactive map (file size 2.5 Mb)

The red points show the IP addresses used by the offender to create an Orkut profile to spread child sexual abuse material, and the yellow ones show the IP addresses used by the offender to access his illegal profile in Orkut. There are lines connecting the location where the profile was created to the location from where the offender accessed his account. From a total of 1784 Ips, there are 1521 IP addresses in Brazil and 126 in India; the 137 remaining belong to 17 other countries. The analyses of the child sexual abuse images on these profiles indicated that the majority of the victims are Brazilians and Indians. In May 2009 the Brazilian Federal Police launched operation Turko to search and seize computers in 103 different locations in Brazil and arrested more than 10 Brazilian offenders. Some of them were prosecuted and declared guilty.

The US based social networking sites (SNS), which are very popular in Brazil with more than 80% of penetration, have become the hub of Brazilians'online social life. Many sexual offenders are attracted to SNS in Brazil due to a combination of the huge number of children using those SNS, their lack of awareness, literacy and the absence of a proactive industry takedown process.
In July, 2008 Google signed an agreement 6, 7 in Brazil to address these issues in Orkut. It was the first agreement that Google signed worldwide to combat child sexual abuse on their products. Since then, Google has classified 19,865 unique Orkut URLs as "child pornography or pedophilia" and tracked 95,705 URLs forwarded by SaferNet Brazil, most of them reported anonymously through SaferNet or one of its partner websites.

The criterion and approach used in the developed world suggests that the proliferation of child sexual abuse material through the web is not a concern or a huge priority for countries like Brazil or India. However, the data disclosed by Google during the investigation that resulted in operation Turko shows that the offenders and the victims are both located in Brazil (and also in India), despite the fact that the content was hosted in Google's servers in the U.S.
This evidence based research is designed to bring a deeper understanding on how Brazilian offenders are using the web to commit crimes against children. It intends to fill some of the country's knowledge gaps through collecting data from a national taskforce to investigate the use of the web to violate children's rights. SaferNet Brazil is responsible for collecting the data, building the database, and developing and implementing the visual analysis tools.
Ends

SaferNet is open to collaborate with other research programmes and organizations, and is very much interested in sharing expertise and exploring new possibilities that can contribute to filling the gap in research on children rights and ICT with a focus on developing countries.