Helping children when it counts: From the Superman of Disaster Response to the Clark Kent of Disaster Risk Reduction

29 Oct 2012
Catherine Cameron, Director of Agulhas: Applied Knowledge,
Elements of this article draw on the Back, Cameron & Tanner paper on Children & DRR, published by CCC in 2009

. Climate change impacts upon children in any number of ways: in the immediate impacts of climate related disasters and in the longer term chronic conditions such as drought, with reduced access to food and water and so to education and livelihoods, not to mention health impacts, both immediate and cumulative. In the struggle for increasingly scarce resources as a result of climate change it is the weaker who will be the losers.

We live in a world that is increasingly affected by disasters. Recent decades have seen significant growth in the number of reported disasters such as drought, floods and cyclones. More people are being adversely affected by these events. The latest science from the IPCC SREX report tells us that this trend is exacerbated by climate change. Three regional summaries and four thematic summaries for Agriculture, Ecosystems, Health and Water bring the truth home all too sombrely and clearly(1). The projections for the coming decades are even more alarming.

The map below shows the increased exposure to floods in 2030 and 2070, assuming constant exposure to hazards.

The children of today and tomorrow will bear a disproportionate share of the impact, both in the immediate and longer-term. Children are highly vulnerable to climate change and disaster impacts, and those living in marginal environments and situations of poverty in particular are more vulnerable still. Given that we have this information why is more not being invested in DRR to support children and their families? Could it be that donors and governments find that the Superman of Disaster Response, with its attendant publicity, visits, blankets and tents feels more satisfactory than the less visible work of Clark Kent in avoiding or reducing such impacts through more and better DRR? (2)

We know that DRR efforts can account for children's needs and that specific attention can be paid to them during the design and implementation of any intervention. Such DRR is 'child-centred' or 'child-focused'. We also know that engaging children directly in the design and delivery of DRR activities can have many benefits. This work is referred to as 'child-led' DRR and covers a broad spectrum of actions.

DRR interventions involving children can be characterised along a continuum from expanding Knowledge, to enhancing Voice, to taking Action. This is further delineated as Action to Protect, to Influence and finally to Transform. It finds that to date effort and success have focused more on the earlier part of this continuum, with much learning available from initiatives to expand and transfer Knowledge and enhance Voice and, to a degree taking Action to Protect. The balance of effort could now shift, to focus more on supporting children engaged in Action to Influence and to Transform as captured in the graphic below. 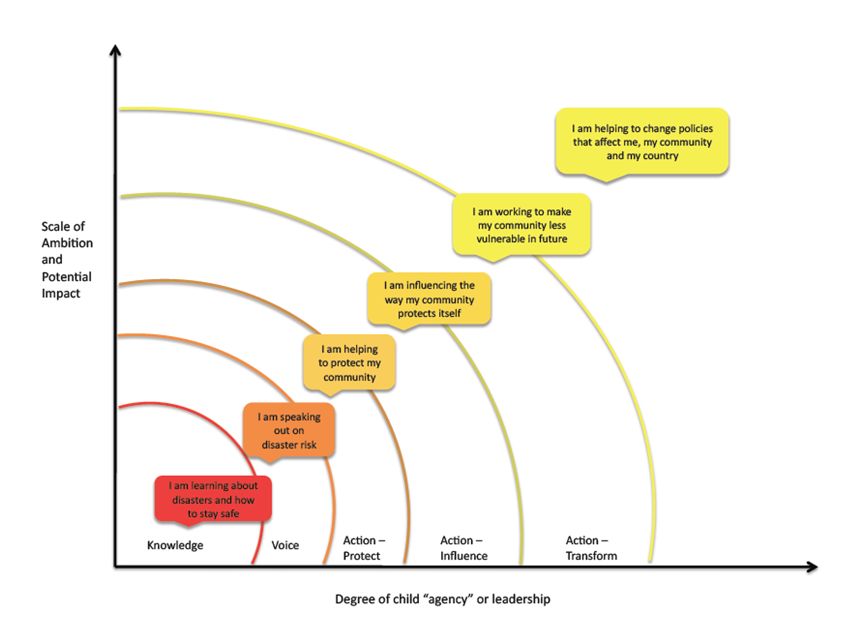 Although much work has been done with local communities, and some with local and regional governments, as one moves up to national and international levels there is less activity. In particular, although there has been growing engagement of youth in national and international arenas, under-18s - who have specific needs as children as well as a right to determine the world in which they will live as adults - have been less engaged. To achieve influential and transformative change, more work at this level is required. If more DRR is focused on Action then greater engagement with international processes and private sector interests could yield benefits. This approach to DRR is more challenging - for adults and children alike - and therefore currently under-explored.

Children can help in a range of ways across the spectrum outlined below: 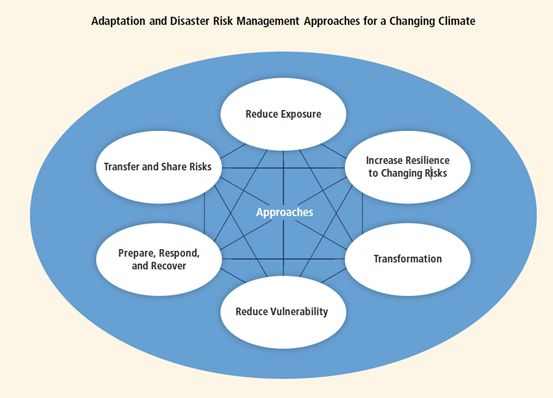 The cost-effectiveness of DRR activities is well understood. There is good evidence to show that DRR can be one of the more cost-effective development interventions. DRR saves lives and protects other valuable and scarce resources such as food, livestock and property. Crucially, it also promotes early and cost-effective responses to climate change risks and will be required on an accelerating scale from now on. We know that development assistance is increasingly being diverted into emergency and distress assistance(3). However, it is much more cost-effective to invest in more and better DRR. The US Geological Survey and the World Bank estimated that an investment in DRR of $40bn would have prevented losses of $280bn in the 1990s(4). In India, DRR programmes yielded a cost-benefit ratio of 13.38 (5) i.e. for every $1 invested, benefits - or in the case of DRR, averted costs - of $13.38 arise. In Nepal, a study by the Red Cross found that DRR initiatives yielded a cost-benefit ratio of 15 (6). It would be helpful to emphasise the additional economic benefits from DRR with children, where the costs may well be lower and the benefits stream higher (using a lifetime analysis and taking into account intergenerational benefits). Importantly for DRR practitioners, this will require a shift in the way such interventions are assessed. More evidence is needed on the outcomes of DRR projects - for example, confirming anticipated improvements in child survival, educational attainment, health and well-being.

Child-led and child-focussed DRR cannot solve everything. However we know it is cost effective, effective and efficient, and much required. Given the considerable benefits that derive from it, both social and economic, it deserves a greater share of effort and expenditure. The balance of that effort should now shift, emphasising influential and transformative action to secure the future of today's children.

Catherine Cameron is a Director of Agulhas: Applied Knowledge and a Visiting Fellow at the Smith School for Environment & Enterprise at the University of Oxford.