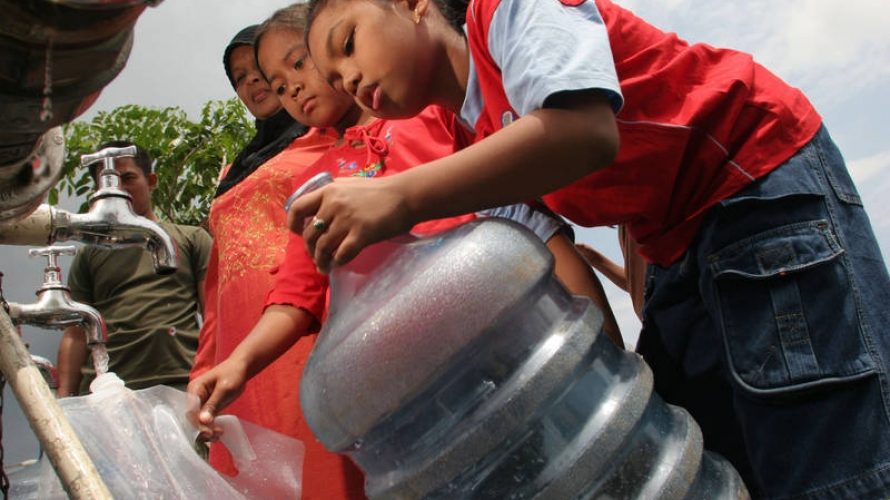 © UNICEF/NYHQ2005-1677/Estey
Girls from a nearby housing complex fill jugs at a new water treatment plant in Banda Aceh, capital of Aceh Province. Eighty per cent of the water and sanitation infrastructure in and around Banda Aceh was destroyed by the tsunami. Today, a total of 65 NGO tankers, including six UNICEF trucks, replenish water tanks throughout the community several times each day.
As the world celebrates World Water Day today, UNICEF urges governments, civil society and ordinary citizens to remember that behind the statistics are the faces of children. Research provides evidence that simple, acceptable low cost interventions at the household level can dramatically improve the water quality of domestic stored water. In the context of education, UNICEF’s experience shows that providing water and sanitation facilities to boys and girls in school is also one of the key interventions for girls’ education helping them to stay longer.

In March 2012, based on data by the global Joint Monitoring Programme (UNICEF and WHO), the United Nations Secretary General announced that the world has met the Millennium Development Goal (MDG) target on water. Enormous progress has been made over the last twenty years, with over two billion people gaining access to improved drinking water supplies. Malawi, for example, has provided the equivalent of almost half of its current population with access to improved water, since 1995. So, with the right policies and programmes we know that progress is possible. But there is still so much to do, to ensure the current MDG agenda is achieved and sustained. This unfinished agenda must not be forgotten. Any future development agenda post-2015 must address these shortfalls.

To start a global discussion on how to address these shortfalls and look at the future challenges a Water Thematic Consultation, co-led by UNICEF and UNDESA, was launched in November 2012. Partners have encouraged stakeholders from around the world to take stock of the lessons learnt from the implementation of the MDGs and to formulate the key global challenges in water to inform the post-2015 development framework in ways that are measurable, inter-generational, pragmatic, and rest on the efficient and equitable use of water.

As World Water Day was celebrated on Friday 22 March, the findings of the Global Thematic Consultation on Water in the Post-2015 Development Agenda were presented and debated during a High Level Forum panel meeting in The Hague (The Netherlands).

Globally, an estimated 90 per cent of child deaths from diarrhoeal diseases are directly linked to contaminated water, lack of sanitation, or inadequate hygiene. Despite a burgeoning global population, these deaths have come down significantly over the last decade, from 1.2 million per year in 2000 to about 760,000 a year in 2011. UNICEF says that is still too many.

UNICEF child mortality data shows that about half of child mortality under the age of 5 occurs in only five countries: India, Nigeria, Democratic Republic of the Congo (DRC), Pakistan and China. These same countries also have significant populations without improved water and sanitation.

Of the 783 million people worldwide without improved drinking water, there are 119 million in China; 97 million in India; 66 million in Nigeria; 36 million in DRC; and 15 million in Pakistan.

The numbers can be numbing, but they represent real lives of real children. For UNICEF every child is important. Every child has the right to survive, the right to health, the right to a future. Improvements in water and sanitation will surely contribute to child development and reduction in child mortality in these counties.