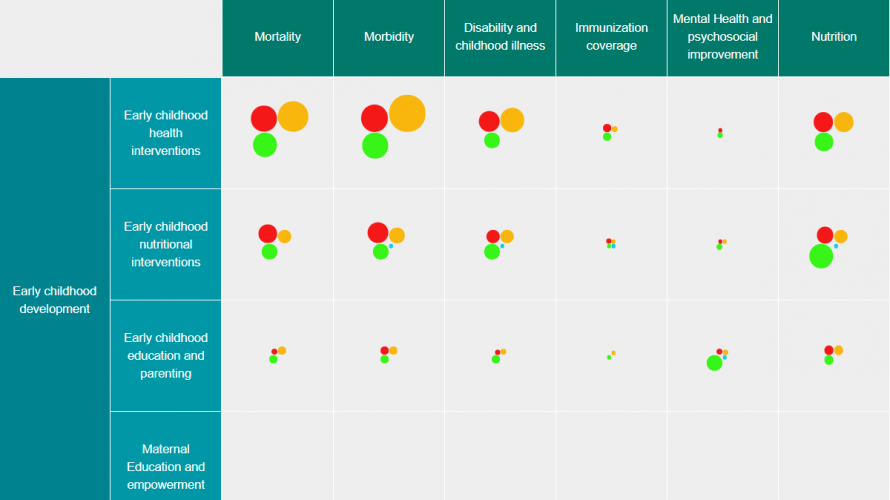 A small section of the Mega-Map on Child Well-Being.

This article was originally published on UNICEF's intranet platform, ICON.  In today's 5 Questions, Kerry Albright, Chief, Research Facilitation and Knowledge Management of the UNICEF Office of Research - Innocenti, speaks to us about her work at UNICEF, her experience at the Evidence for Children roundtable event in New York, and her thoughts on the future of research at UNICEF. Saranya Misra (SM): Can you tell us a little about yourself and your work at UNICEF? Kerry Albright (KA): Well I joined UNICEF about three and a half years ago now from DFID, where I was doing a lot of work on building an organizational evidence culture, and I was recruited to do pretty much the same thing here. 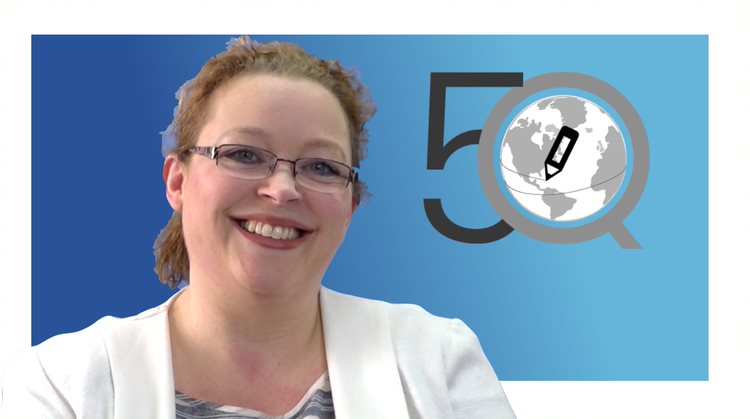 I'm a socio-political scientist by training, passionate about evidence and passionate about science communication, so combining those two. And I'm Chief of the Research Facilitation and Knowledge Management Unit at UNICEF's dedicated office of research, Innocenti, based in Florence, Italy. The unit really does four main things: one is around research governance, so a lot of work that people will know about, things such as quality assurance and ethics. Another one on research uptake and impact, thinking about how we can ensure that the research we commission gets better used, including looking at the influence of our advocacy activities. The third one is around evidence synthesis, so making sure that the evidence that we're using internally is set within the broader body of evidence from outside, bringing that into the organization. And the fourth one is around capacity building, so things like research management training, that many people might know the unit for, but also things around methodological briefs on things like impact evaluation, randomized control trials, etc. and helping the organization to build a better culture of evidence. SM: You've just finished hosting a big event in New York. Can you tell us a bit about the purpose of this event? KA: It was an Evidence for Children roundtable. It was a really exciting event for two purposes, really. The first was to launch a megamap on child welfare in lower-middle income countries that we've produced in collaboration with the Campbell Collaboration, which is really about looking at evidence on child wellbeing. And excitingly, it's been set against the five goals of our new Strategic Plan, so we hope to make it really easy for UNICEF staff who are time-pressed to be able to access evidence that's relevant for policy and programming. And also another part of that event was really just to bring people together, across donors, across NGOs, policy makers, people that are interested in evidence for children, to try and start a dialogue about how we could maybe form a community of practice to better coordinate in future so that we don't end up reinventing the wheel and missing out really important areas that nobody is commissioning any evidence in. SM: How does this fit into a long term vision for evidence at UNICEF? KA: Well it's just one of many things really. Within our new strategic plan, people will know that we have evidence as a driver of change for children. So what we're starting to think about is what does this mean for us as an organization, as we move more upstream in the SDG era, and we look at things such as whether or not UNICEF should be a knowledge broker for children, whether our role is changing. We need to maybe think about, you know, are we fit for purpose for that? Do we have the right skillset amongst our staff, or do we need to start thinking about that?

We've been doing a lot of work on generating evidence and improving the quality of evidence, but have we really also been thinking about the demand side?

We've been doing a lot of work on generating evidence and improving the quality of evidence, but have we really also been thinking about the demand side? Do people actually want to access evidence, do they have the incentives to access evidence for their decision-making. And also, do our staff have the skills, are we able to know what is good and bad evidence? Where to go to access it and appraise it. So, it's a much bigger picture and quite an exciting time to be looking at these sorts of issues within UNICEF. SM: What is the value of organizational learning in UNICEF, and what are the challenges facing leaders? KA: You know, organizational learning is so important, and it's always seen as something that just happens naturally. Every organization where I've worked, never has sufficient investment. And it's really important, we have to find systems and processes to get that knowledge out of people's heads and document it, and to learn from failures as well as successes, and to enable people not to be afraid about opening up about that sort of thing. And that's really important. That needs a very strong indication from leadership right at the very top of the organization, that it's safe to talk about failures. And I think the reason it's so important is that we ought to be working to be an organization, where we're adapting and learning and evolving as we go along, so that learning automatically feeds into our policies, our programming, etc. But without looking at what sort of incentives exist for being able to draw upon that learning, looking at whether or not we need to think more systematically about knowledge management and knowledge sharing across the organization, then we risk really reinventing the wheel and not making progress as quickly as we should be doing.

We have to find systems and processes to get that knowledge out of people's heads and document it, and to learn from failures as well as successes, and to enable people not to be afraid about opening up about that sort of thing.

SM: So what's next in relation to enhancing an evidence culture at UNICEF? KA: Lots of exciting things. Obviously the most immediate is follow-up from the Evidence for Children roundtable, where we're looking at maybe trying to get a community of practice, people that are interested in these sorts of issues to keep the dialogue going. We also have an evidence survey that will be coming out across UNICEF shortly. That's really trying to assess staff skills and attitudes towards evidence: are we really practicing what we preach, are we really using evidence systematically in our decision making? And then also, we're looking at, with the different evidence activities at UNICEF, the data, the research, the evaluation, a lot of us are doing things involving capacity strengthening with country offices, working with governments to help them, using data to strengthen national statistical systems, working with parliaments to strengthen evaluation, looking at strengthening research management skills, but we're quite fragmented. So we're looking at whether or not we can maybe join these up much better, whether we can work more coherently and consistently to strengthen evidence ecosystems in those countries where we're working. And by that I mean systematically helping governments to think about how they might use evidence in their own decision-making, and working with the actors who are there, like science journalists, like parliaments, like civil servants, etc. So that really, we leave behind a sustainable culture of evidence, thinking, of critical appraisal skills, which ultimately will help us reach far more children far more quickly and far more effectively.

You can find out more about the Evidence for Children Roundtable in this article. Explore the new Mega-Map on Child Well-Being here.