25 years of research on child rights at Ospedale degli Innocenti 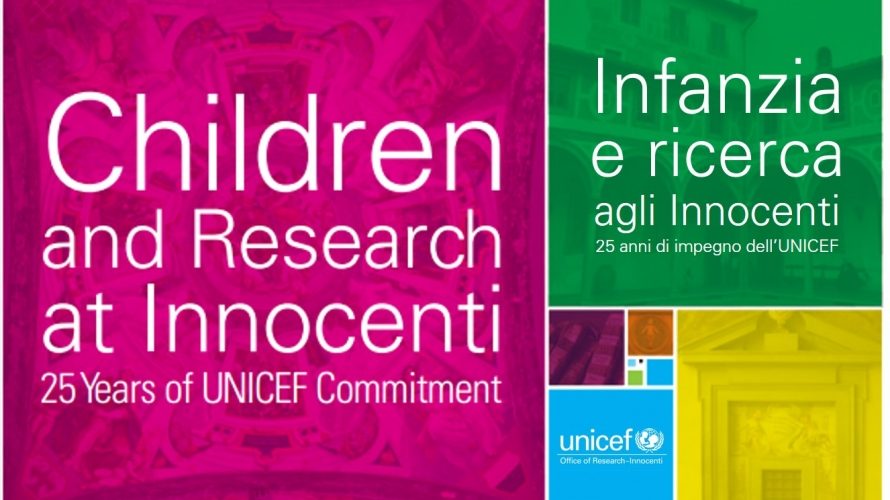 UNICEF is well known for its role in responding to complex humanitarian crises affecting children around the world. The work of the UNICEF Office of Research – Innocenti, based at the 600-year-old Ospedale degli Innocenti, in Florence, Italy rarely hits world headlines. Yet over the quarter century of its existence UNICEF at Innocenti has produced ground-breaking analytical work which has informed action and shifted global development discourse on critical child rights issues. In order to mark its 25th Anniversary, the Office recently convened a special anniversary seminar to reflect on achievements and look toward future directions for research at Innocenti. In its historic Renaissance surroundings former directors and senior researchers, together with a constellation of local and national Italian partners, shared their experiences and insights. On behalf of the Italian Government, the Office’s most generous financial donor, Luca Zelioli, First Counsellor, Italian Ministry of Foreign Affairs, delivered opening remarks. 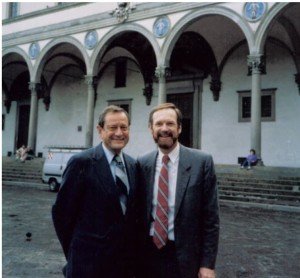 Jim Grant, Former UNICEF Executive Director and Jim Himes, first Director of UNICEF's International Child Development Centre in front of the Ospedale degli Innocenti in Florence, Italy (Circa 1988)
Inaugurated in 1988 as the UNICEF International Child Development Centre, with a broad mandate to contribute to an “emerging global ethic for children,” research quickly became a defining mission and the institution’s name soon evolved to Innocenti Research Centre, and finally to the UNICEF Office of Research – Innocenti. “When we moved here these were turbulent years, the Berlin Wall was falling, adjustment in Africa was not working so there was a lost decade in Africa and Latin America and there was a big debate on how to finance health, education and nutrition in developing countries,” recalled Giovanni Andrea Cornia, UNICEF’s first Chief of Socio-Economic Policy at Innocenti (1989 – 1995). During years of global economic recession Innocenti produced a succession of important studies in Africa and Latin America which provided an evidence base for UNICEF’s global call for “adjustment with a human face.” Following ratification of the Convention of the Rights of the Child, a range of research projects at Innocenti contributed significantly in shaping UNICEF’s adoption of the human rights-based approach to development. Innocenti pioneered much early work on child protection. Numerous studies focused on what were deemed “emerging issues” in the 1990’s such as child trafficking, children in conflict with the law and child labour. Research on the implementation of the Convention on the Rights of the Child conducted at Innocenti allowed UNICEF to explore aspects of children’s development which were considered sensitive or taboo subjects in various cultural and national contexts. According to Nigel Cantwell, child protection expert and former senior officer (1998–2003), Innocenti has explored themes leading the global discourse on children’s issues, often producing work which pushed a range of sensitive child rights issues into the mainstream of global programming and service delivery. “Juvenile justice is an area where there is often a total lack of understanding as to what actually works in terms of preventing and responding to offending by young people,” said Cantwell. “Juvenile justice has become more integrated into UNICEF programming, and I think that Innocenti helped to pave the way for it to gradually move out of the sensitive issue area.” 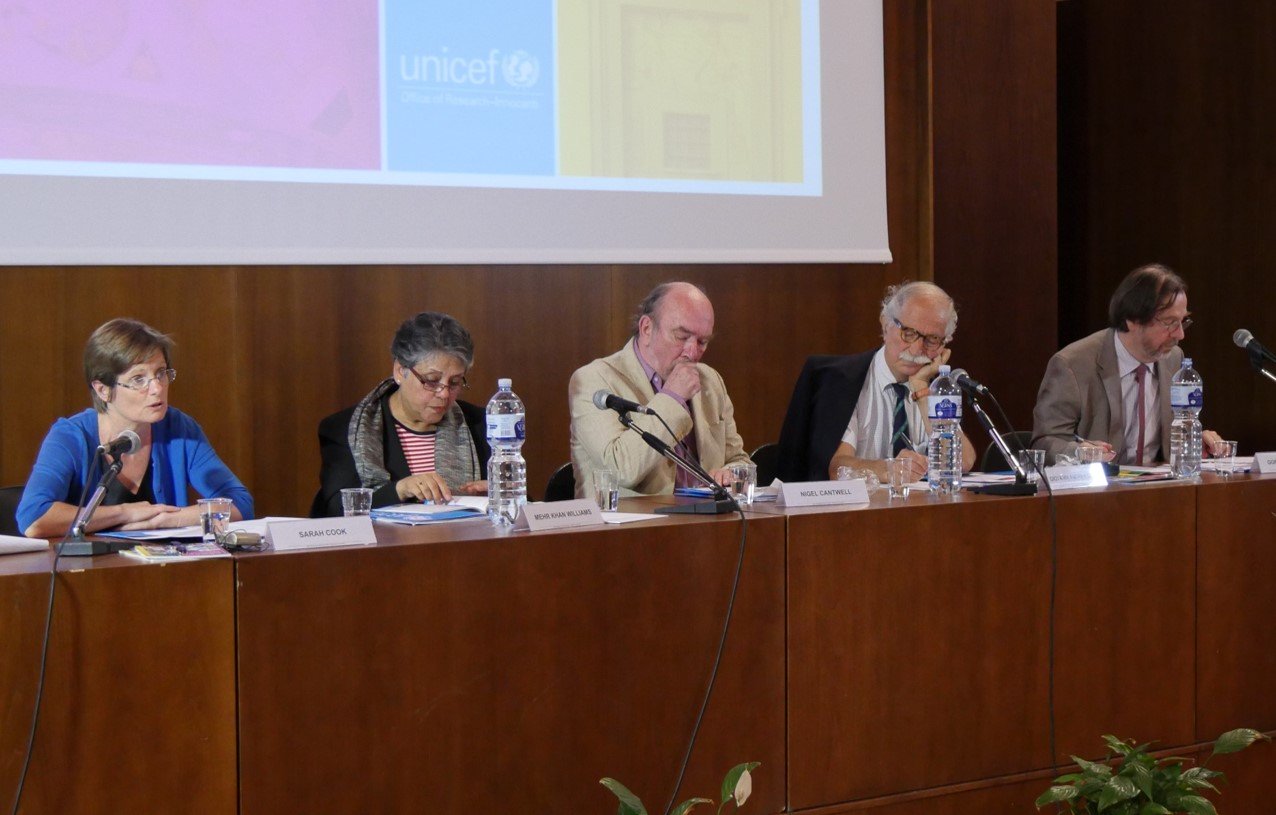 Sarah Cook (L) Director of the UNICEF Office of Research - Innocenti introducing a panel of former Innocenti Directors and Senior Researchers, (L_R) Mehr Khan-Williamson, Nigel Cantwell, Giovanni Andrea Cornia and Gordon Alexander at the UNICEF Innocenti 25th Anniversary Seminar in Florence, Italy.
Panellists highlighted the important benefits of a UNICEF research centre located apart from headquarters, empowered to pursue an independent research agenda. Gordon Alexander, recently retired Director (2010–2013) pointed out Innocenti’s unique ability to take a long-term, multi-disciplinary approach to knowledge on children. “There are very few places in the world where research for children in all its dimensions actually comes together. I think that is something that is very special to Innocenti.” In recent years, Innocenti has played a leading role in improving social and economic policy for vulnerable children in both poor and rich countries. The Innocenti Report Card series, based on league tables which compare child well-being among OECD nations, has risen in prominence to become one of UNICEF’s most visible flagship publications. Through the Report Card, Innocenti has expanded substantive advocacy for vulnerable children in the developed world with UNICEF’s network of National Committees. Mehr Khan-Williamson, former Innocenti Director (1998–2000), reflected on the challenges she faced initiating the series. “Starting the Report Cards was not easy…these were Board Members, they were donor countries and we are an inter-governmental organization and not much can be said to those who are also feeding you. But the issues were essential and they had to be dealt with.” Reflecting on the emergence of Innocenti’s current incarnation, Gordon Alexander recalled how the Executive Board defined its current mission. “UNICEF has always been right at the heart of research, in many areas. It was a tremendous user and a convener of research and occasionally it did brilliant pieces of research. But there was never a permanent home for research, and that is what gave rise to the idea of linking the work of Innocenti with the more global approach.” 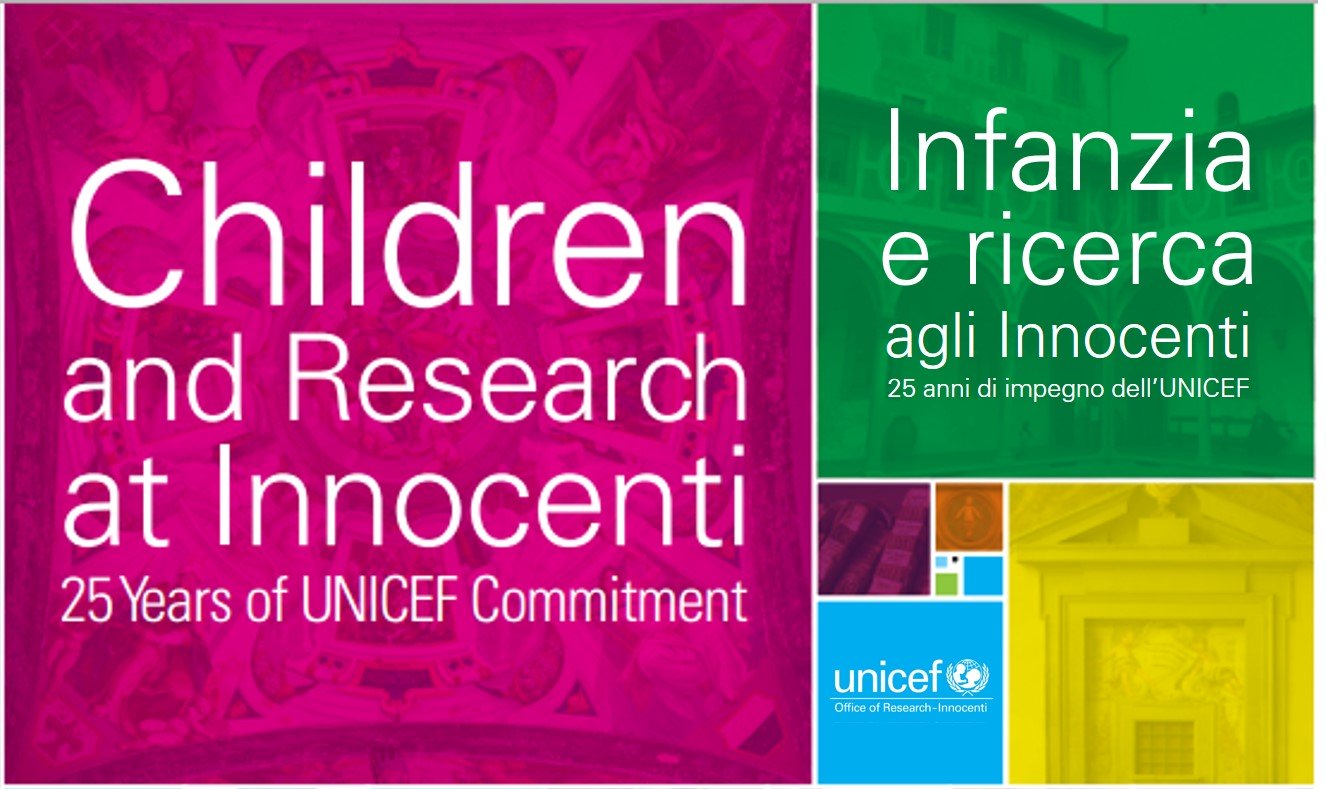 Today at Innocenti UNICEF plays a critical evidence gathering and knowledge building role on a wide range of cutting-edge children’s issues. It is a leading centre on impact evaluation of cash transfers. It coordinates multi-country research on the drivers of violence affecting children. It plays a central role in adolescent well-being, child rights and the internet, child rights implementation, family and parenting support policy and multi-dimensional child poverty analysis. A special 25th Anniversary e-publication “Children and Research at Innocenti: 25 years of UNICEF Commitment” was formally launched in both English and Italian at the Seminar. It is an invaluable small volume for anyone seeking the story of how UNICEF’s presence at Innocenti emerged and evolved over the last 25 years. Follow me on Twitter: @dalerutstein