When over 500 minds converge to prevent gender-based violence 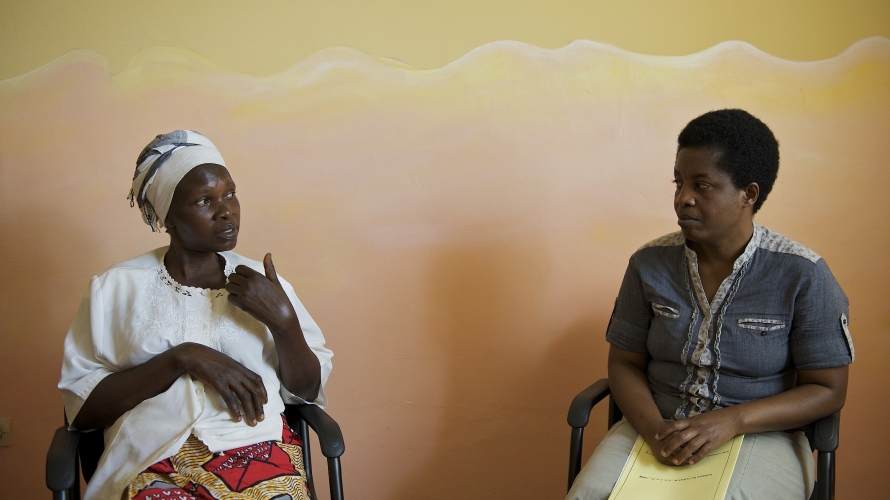 A women receives counseling at a centre which provides support against gender based violence at the Gihundwe hospital in Rusizi district in Rwanda.

Late last month, over 500 researchers, policymakers, donors and activists descended on the beautiful city of Rio de Janeiro, Brazil for the 5th bi-annual Sexual Violence Research Initiative Forum, the largest global gathering focusing on gender-based violence (GBV) in low- and middle-income countries. The forum has become the venue to connect with others working to prevent and respond to GBV, hear the newest research and evidence, network and collaborate. The theme of this year’s forum, “Partnerships for Policy Action,” is apt given the Sustainable Development Goals (SDGs), for the first time, include targets to eliminate violence along with tracking and accountability mechanisms for national governments. Dr. Claudia Garcia Moreno of the World Health Organization opened the Forum by reflecting on the great progress made and long road still ahead. She stressed the need for partnerships and a multi-sectoral, participatory approach to tackle the complex forces that drive violence, particularly involving youth, who will determine the landscape of the future. Dr. Garcia Moreno re-emphasized attention to vulnerable groups, including ethnic minorities, and the need to move from intervention testing to effective scale-up of programs that “work.”

Although progress has been made in establishing that violence against children is a problem in every country, data alone is not sufficient without processes to contextualize it and use it actively to inform programming, direct policy, and monitor achievement

This years’ forum was the largest to date, with over 350 presentations, workshops and satellite meetings attended by 535 participants, an increase from Stellenbosch, South Africa in 2015 (129 presentations among the 398 attendees) and Bangkok, Thailand in 2013 (105 presentations among the 180 attendees). The Forum’s rapid growth reflects how gender based violence is increasingly recognized as a key global issue and connected to other forms of interpersonal and structural violence. The commitment to end violence is also growing among activists, practitioners, researchers and policymakers. 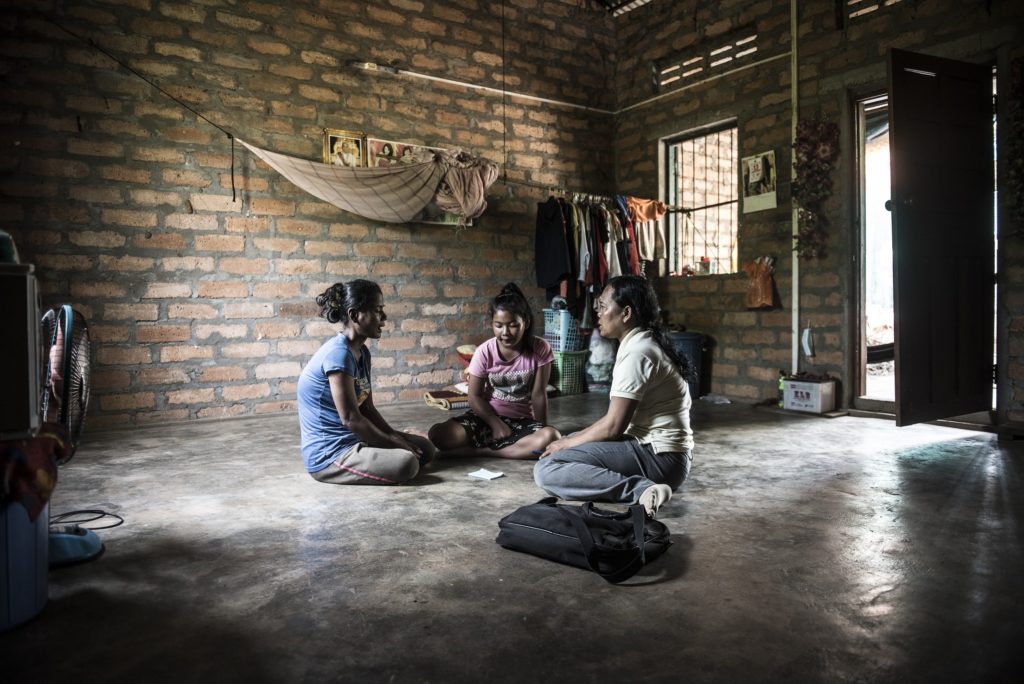 A social worker consults a family in Kandal province, Cambodia. The family has been severely affected by gender-based violence and is in need for social protection and support.
For a comprehensive summary of new research and evidence presented at the forum, see its website (where presentations will be posted). The following summaries reflect UNICEF’s contributions, as well as four priority areas of focus.

How do we leverage global data on violence affecting children and use it for policy action?

This was the topic of an inter-agency panel organized by UNICEF Innocenti, which began with the first ever presentation of global age-, sex-, and perpetrator-specific estimates of childhood violence from a systematic review led by London School of Hygiene and Tropical Medicine’s (LSHTM) Karen Devries. These results were also recently released as part of the Know Violence in Childhood Initiative, suggesting that a larger number of children are subject to violence than previously estimated. Audrey Pereira (Innocenti) then presented joint ongoing work estimating the percentage and determinants of disclosure and help-seeking among childhood violence survivors across six countries, suggesting the rates of formal help seeking are extremely low, with implications for reducing barriers children face. Innocenti’s Alina Potts and UNICEF Philippines’ Faye Balanon presented work from the Multi-Country Study on the Drivers of Violence Affecting Children, detailing how nationally-led research processes can drive country-level policy change. Although progress has been made in establishing that violence against children is a problem in every country, data alone is not sufficient without processes to contextualize it and use it actively to inform programming, direct policy, and monitor achievement in these areas as well as toward the global SDGs.

The understudied linkages between economic empowerment and violence reduction

There is increasing evidence that economic empowerment interventions have potential to decrease violence, a potential explored in a recently published Innocenti review of social safety nets and violence against children. At the Forum, Innocenti’s Amber Peterman presented joint work exploring the intersection of cash transfers and intimate partner violence, reviewing mixed methods studies indicating that the majority of rigorous work to date shows cash can decrease violence through a variety of mechanisms. In the same session, Shalini Roy of the International Food Policy Research Institute presented new work from Bangladesh showing that cash plus behavior change communication reduced intimate partner violence six months after the intervention ended. The Forum also featured alternative economic interventions, such as ongoing work on a youth-parent livestock asset transfers also in the Democratic Republic of Congo (Nancy Glass of John Hopkins University). We look forward to the forum spurring more cross-disciplinary work on economic empowerment and structural interventions to reduce violence between specialists on violence against women and girls and development economists (among others).

UNICEF scholarship recipient Joyce sits outside her home in Ndirande township in Blantyre with UNICEF Malawi’s Doreen Matonga. An outstanding student and talented poet, Joyce is top of her class which has a total of 122 children.

Gender based violence in Emergencies

UNICEF’s long-standing work, led by Mendy Marsh, has contributed greatly to the professionalization and standardization of both prevention and response of gender based violence in emergencies. This was evident in several panels showcasing inter-agency and sector-leading tools supported and (co)led by UNICEF, including the new Inter-Agency Case Management Guidelines, findings from the “Communities Care” program using social norms theory to reduce GBV in South Sudan and Somalia, and sharing learning and uptake from the first 18 months of rolling out the revised IASC GBV Guidelines. Research in emergencies is possible and vital to informing programming, particularly in protracted crises; the ethics and methods for doing such work were showcased in a pre-conference workshop by the International Rescue Committee and the Global Women’s Institute of George Washington University, who are developing field-friendly guidance to fill gaps in this area. Work showcasing the use of mobile technologies, mixed and qualitative methods, and effectiveness of programs to prevent violence. For example, the work of Mazeda Hossain and Alys McAlpine (LSHTM), the International Rescue Committee, and other colleagues to evaluate programs providing care for gender based violence survivors in Dadaab refugee camp reflects on the impacts this kind of work has on the refugee community workers who often serve as ‘frontline’ responders in their own communities.

Gender discrimination is recognized as a root cause of violence against women and girls, often underpinned by unequal ‘gender norms’ and harmful ‘social norms.’ Panels focused on the effectiveness of interventions to change harmful social norms and introduce positive social norms among couples, youth, and communities. These included UNICEF’s Communities Care program (mentioned above), identifying entry points for changing social norms promoting gender based violence among young people in the Latin America and Caribbean region and Tunisia, and the Gender Roles, Equality, and Transformations (GREAT) project conducted by Georgetown University’s Institute for Reproductive Health, Save the Children, and Pathfinder International. This initiative aims to understand how gender norms are learned, internalized and passed on among adolescents (ages 10-19). As reflected upon by a participant during the closing session, much of this work assumes that beliefs must be changed before changes in behavior can be achieved, but how do we know that to be the case? Further research is needed to understand how much behavior can change in spite of, or in contradiction to people’s beliefs. The closing plenary with talks by re-emphasized the messages shared by Emma Fulu of the Equality Institute at the start of the conference, including the need to re-establish a feminist approach to combating GBV, one that centers the voices of women and girls in work to end violence against them, and that values different forms of knowledge rather than solely medicalized or technocratic approaches. The importance of inter-sectorality and partnerships was highlighted, as well as a need to meaningfully engage with vulnerable groups such as indigenous populations to end the often overlapping or ‘intersectional’ violence they face. In the words of one courageous survivor of childhood sexual abuse who now works tirelessly against it, Brisa de Angulo of Bolivia, “Nothing about us without us.” There was recognition that despite the growth in numbers, the community working to end violence is relatively small in comparison to the magnitude of the issue—thus a reminder that we “always need to keep marching” to make progress for those less fortunate than ourselves (alluding to the latest march against femicide after the murder of 19-year-old Mara Fernanda Castilla in Mexico). Finally, youth activists from around the world performed for the participants, reflecting on what they had seen, heard, and contributed during the conference, reminding us to put our efforts into evidence for real change, rather than academic accolades.

We heartily congratulate the SVRI secretariat on organizing another successful international Forum and look forward to checking back in on how we are progressing in terms of voice, accountability, and evidence, at the next Forum in South Africa in 2019 (in beautiful Cape Town, South Africa)! Amber Peterman is a Social Policy Specialist and Alina Potts is a Research and Evaluation Specialist in Child Protection at the UNICEF Innocenti. For additional information, see Innocenti’s research program on violence, including the Multi-Country Study on VAC, SVRI-funded work linking education to violence in Malawi and Uganda (brief), and our research on cash transfers, women’s asset ownership and violence. Explore the UNICEF Innocenti research catalogue for new publications. Follow UNICEF Innocenti on Twitter and sign up for e-newsletters on any page of the UNICEF Innocenti website.