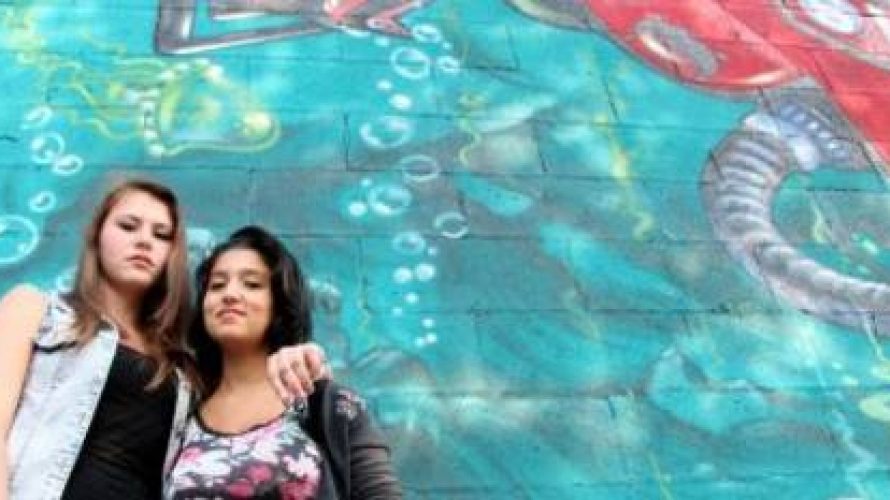 Sept. 2014) Daniela Cojocaru and Chiara Dimastromatteo, standing by a graffiti wall just outside the Alkadia Youth Centre in Turin, Italy. Daniela, 16, is originally from Moldova, Chiara, 16, does not go to school and does not have a job. Alkadia is a recreational and cultural centre where young people from disadvanged families get together. Photographer: Giacomo Pirozzi

girls are more likely to suffer from several deprivations at once, resulting in higher rates of multidimensional poverty among girls in 60% of the countries studied.

Unlike the more standard material aspects of poverty, this study focuses on rights-based outcomes of nutrition, health, protection from violence, and access to information, as well as more relational dimensions of school environment and family environment. Adolescents who are deprived in three or more out of six dimensions are counted as multidimensionally poor. The poverty rate ranges from one in ten in Norway and Sweden to one in three in Bulgaria, Latvia, Russia and Wallonia (Belgium). The Health Behaviour in School-age Children (HBSC) survey was administered separately in the regions of Belgium and Great Britain, allowing for sub-national presentation of the results for these two countries. In only one country, Israel, the gender difference goes the other way: the poverty rate is 5 points higher for boys. Boys in Israel are more likely to suffer from the lack of classmate or teacher support (school environment), to be victims of school-based or cyber-bullying (protection from violence), to report a poor quality of family communication or family support (family environment) and not to use computers on week days (information access). 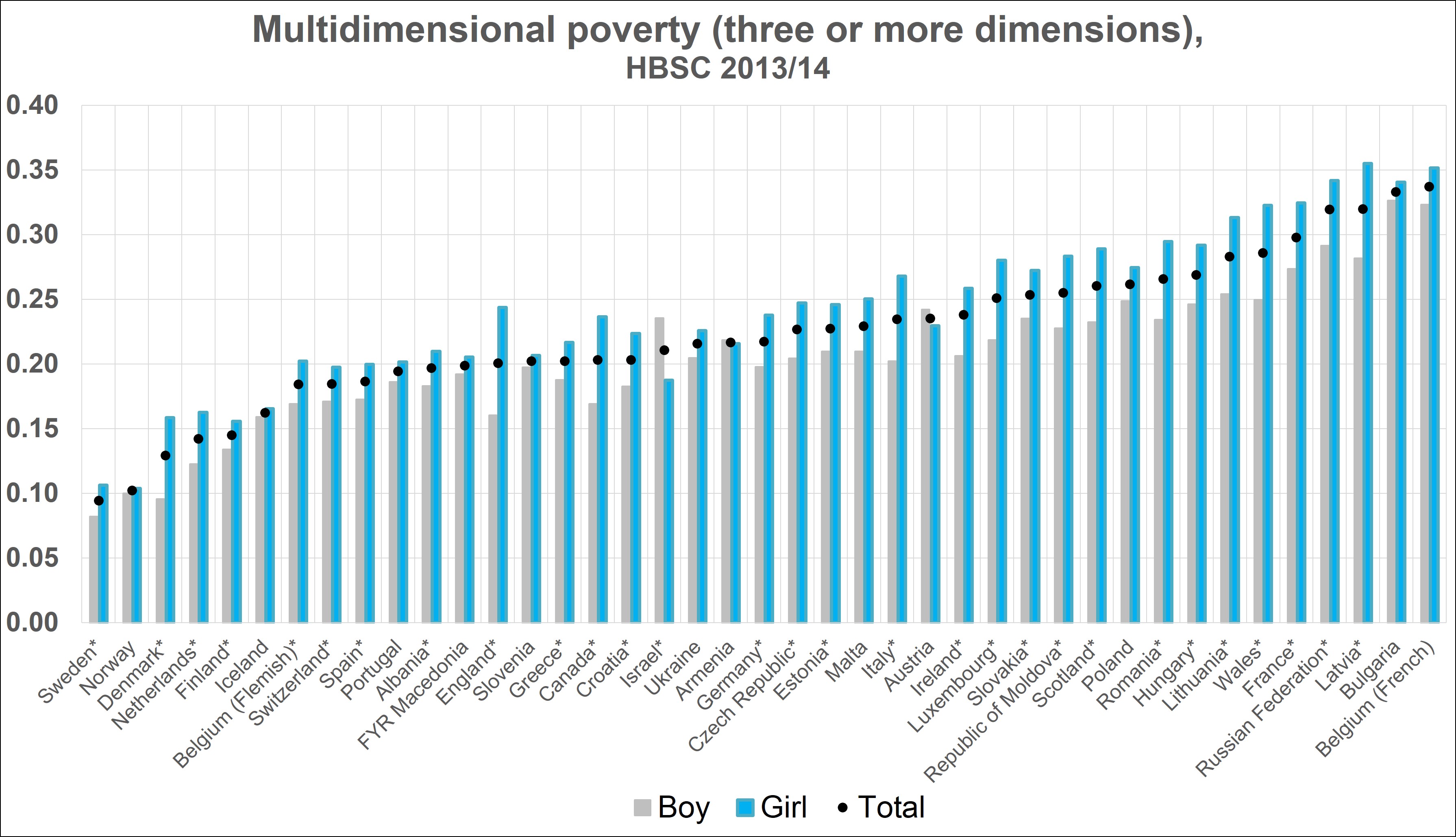 *significant at p<0.05.
Source: Chzhen et al 2017, Figure 7 (with added information on statistical significance of the gender gap).
Out of the six dimensions, perceived health is the most skewed against girls, as they have higher rates of poor self-reported health and health complaints than boys in every single country. This is in line with other research that shows that girls tend to have poorer self-rated health than boys, with the gender gap largest at age 15. In contrast, information access is disadvantaging boys because they are less likely to use computers on weekdays. However, girls are more likely to suffer from several deprivations at once, resulting in higher rates of multidimensional poverty among girls in 60% of the countries studied. Other dimensions show a more mixed picture. While nutrition appears to be gender-balanced overall, girls are more likely to miss breakfast on weekdays, while boys are less likely to eat fruits and vegetables at least once a week. In protection from violence, girls are more likely to suffer from cyber-bullying, while boys are more subject to (otherwise more prevalent) school-based bullying. The gender gap in deprivation risks in the dimensions of school environment and family environment can also go either way, with boys or girls at a higher risk in different countries. However, there are no gender gaps in these dimensions in the majority of the countries. The study uses UNICEF’s Multiple Overlapping Deprivation Analysis (MODA) framework, drawing on data from the 2013/14 HBSC survey for 36 European countries, Canada, and Israel. It is children themselves who respond to questions about their lives, rather than parents, teachers or ‘household reference persons’. Adolescence is a critical period in children’s life course, with lasting consequences for adult outcomes. Gender differences among 11-15-year-olds are likely to persist into adulthood. This poses a serious challenge for higher income countries in achieving the universal Sustainable Development Goals. Goal 1 includes a target to reduce poverty in all its dimensions among men, women and children of all ages. Goal 5 calls for achieving gender equality and empowering all women and girls, and many other Goals and Targets build on the principles of equality and non-discrimination.

The article “Multidimensional Poverty Among Adolescents in 38 Countries”, co-authored by researchers at UNICEF Innocenti and four academic institutions, will be included in a guest-edited special issue of Child Indicators Research on multidimensional child poverty. Read the introduction to the special issue here. Yekaterina Chzhen is a social and economic policy specialist at the UNICEF Office of Research – Innocenti. She works on multidimensional child poverty, comparative social policy and child well-being. She recently co-edited a book about the impact of the Great Recession on child poverty in rich countries “Children of Austerity” (a free pdf copy is available here). Follow Yekaterina on Twitter at @kat_chzhen. Follow the UNICEF Office of Research at @UNICEFInnocenti.