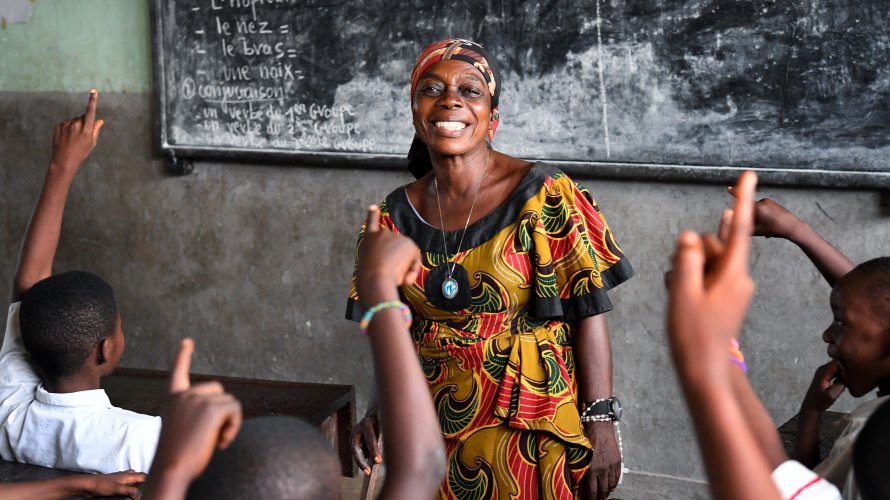 The global education community has long focused on girls’ education and finding pathways to increasing girls’ access and retention in school, improving learning, and supporting girls’ holistic wellbeing. While the positive effects of female teachers on girls’ education have been well-researched, one piece often missing from gender discussions in education is school leadership – and the noticeable absence of women school leaders around the world.

For much of his life, Matt Brossard, Chief of Education at UNICEF Innocenti, has been surrounded by teachers and school leaders: both of his parents were teachers, his sister and his cousin are teachers, and his aunt was a primary school leader. Before segueing into a career shaping evidence, policy, and programmes on education, Matt taught mathematics in a secondary school center led by a man.

Jessica Bergmann, an education researcher at UNICEF Innocenti, spent her entire education – from primary to secondary school and even to university – without a single female school leader. This experience continued when she became a secondary school English teacher, teaching in a school that was also led by a male principal.

As part of a new research initiative they are developing at UNICEF Innocenti, Women in Learning Leadership (WiLL), Matt and Jessica reflect on their personal experiences while looking at the available research and data. They realized that having more female head teachers could be an untapped opportunity to address the learning crisis, for both girls and boys.

School leaders play a critical role in creating high-quality teaching and learning environments. Effective school leaders can contribute to improving student learning outcomes, closing equity gaps, and fostering strong relationships between schools and the communities they serve. Yet, women remain underrepresented in school leadership roles, despite their increasing representation in the teaching workforce. Across several Latin American and Caribbean countries, including Mexico, Chile, and Colombia, there is a 20-percentage point difference between the share of female public primary school leaders and the share of female teachers, according to 2013 TERCE data.

Similar trends are seen across 14 countries in sub-Saharan Africa that participated in the 2019 PASEC assessment, where only 22 per cent of surveyed students attended a school with a female head teacher. Findings from our Data Must Speak positive deviance research show similar results: in Niger, Mali, and Togo, only about 1 in 10 school leaders are women (see Figure 1). Even in Niger, where 40 per cent of teachers are female, only 11 per cent of school leaders are women.

Figure 1: Female participation in school leadership and in the teaching workforce (primary education) 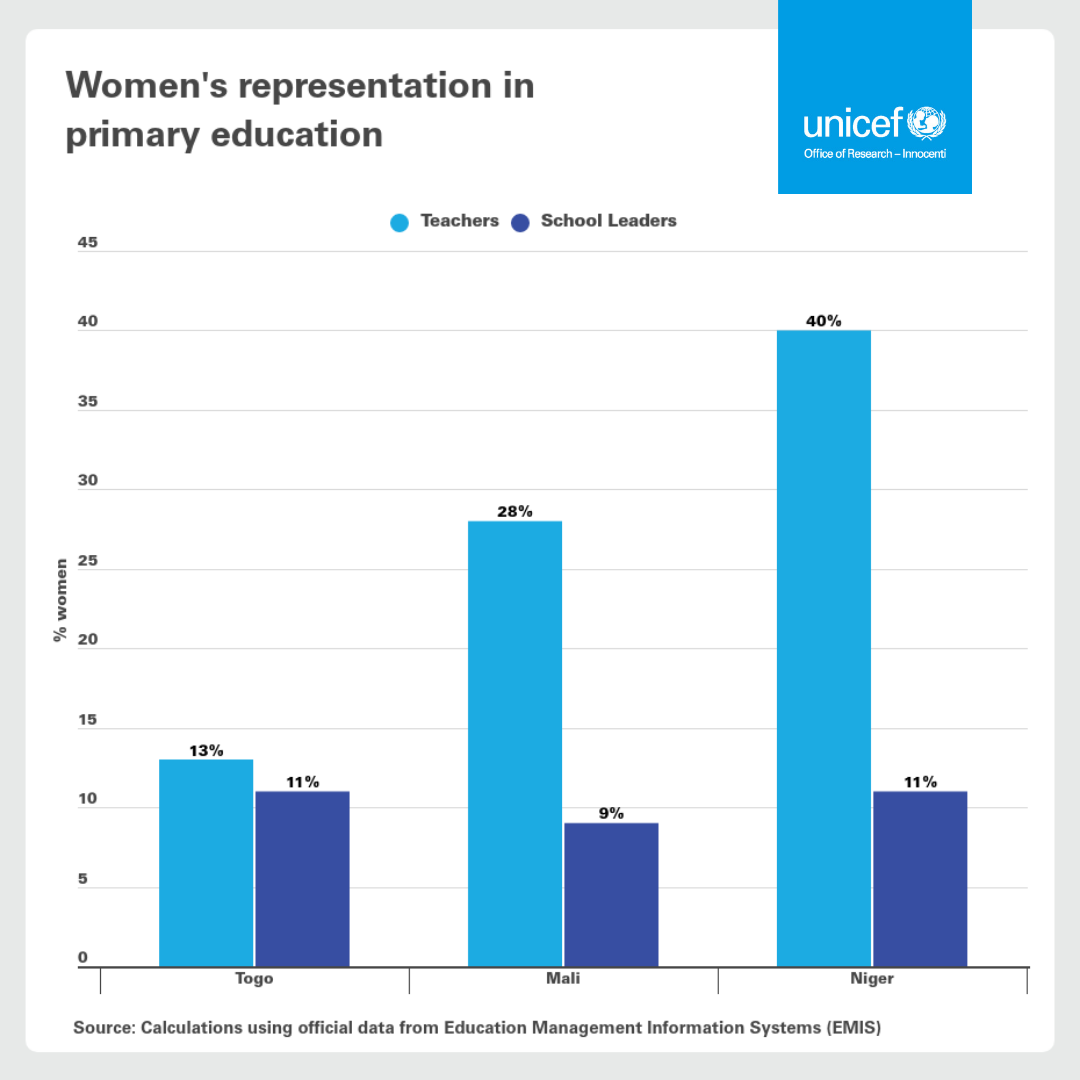 Early analysis and research from UNICEF Innocenti and other organizations shows that women-led schools may perform better than men-led schools. Across the PASEC-participating countries, learning outcomes at the end of primary school for both girls and boys in female-led schools are higher. PASEC 2019 assessment shows that the difference is statistically significant in eight countries (Benin, Burkina Faso, Cameroon, Chad, Côte d'Ivoire, Madagascar, Niger, and Senegal) in reading and in six countries (Benin, Burkina Faso, Cameroon, Côte d'Ivoire, Madagascar, Senegal) in mathematics.

In Lao PDR, our research shows that highly effective schools – schools that perform better than others in a similar context with the same resources – are twice as likely than other schools to be led by a woman. In Mozambique, schools with a female school leader have lower dropout rates than schools with a male school leader, noting that these results may be driven by the higher concentration of female school leaders in urban areas and more developed regions of the country (UNICEF Innocenti, forthcoming). In Togo, primary school exam results and promotion rates are higher for girls in schools where the head teacher is a woman, even when controlling for a set of contextual and geographical variables, such as whether the school is in an urban or rural area (UNICEF Innocenti, forthcoming).

There is a lot we still do not understand about women in learning leadership.

Second, more evidence is needed to understand the differences in learning outcomes for schools led by women compared to men and identify what practices, behaviors and attitudes contribute to these differences. What do women school leaders do that leads to better school performance? And how can we incentivize more school leaders, both women and men, to adopt these behaviors?

These questions have formed the foundation of UNICEF Innocenti’s new research initiative, Women in Learning Leadership, which aims to expand the evidence base on gender and school leadership. Too many students around the world still move through their educational experiences without seeing women as part of the leadership landscape. This reinforces existing gender norms and stereotypes surrounding effective leaders and leadership capabilities. Both girls and boys could benefit from more women school leaders.

For International Women’s Day and beyond, as we reflect on ways to create a more gender equal world and #BreakTheBias, school leadership must remain a part of the conversation – because where there is a WiLL, there is a way.

For more information about our Women in Learning Leadership (WiLL) research initiative and how to engage, Jessica and Matt can be contacted at jbergmann@unicef.org and mbrossard@unicef.org.