Climate change, psychology and peace: Mitigating the impacts on children 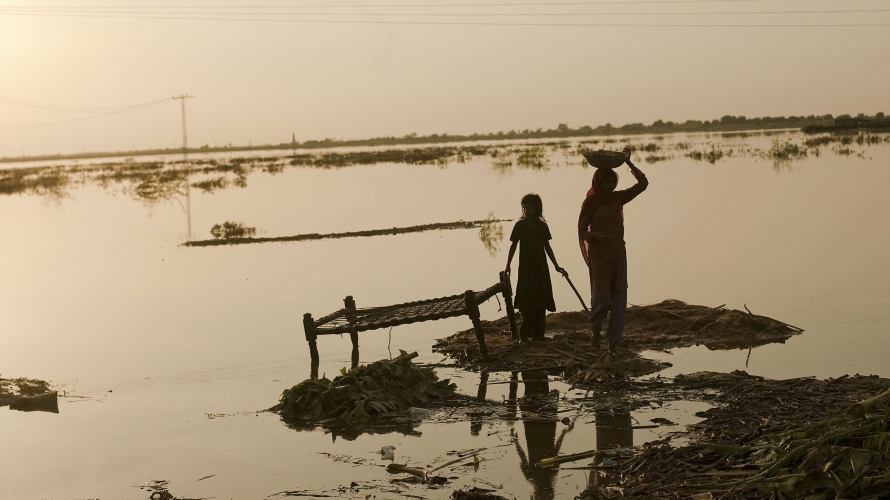 Children stand on a small island formed by flood waters, in Mirpurkhas District, Sindh Province. They have been displaced by flooding.

Primatologist Jane Goodall has modified the proverb “We do not inherit the earth from our ancestors; we borrow it from our children” to “… we are stealing it from our children”. She was referring to climate change, which has been described as the greatest health challenge of the 21st century (Costello et al., 2009), and will have serious psychological impacts on human well-being (Clayton et al., 2017). Given its potential to increase inequality and greatly reduce the liveability of the planet, it has also been described as the greatest social and moral crisis of our time. If we are concerned about the wellbeing of future generations, it seems to me that we each need to find ways to actively work towards protecting them from catastrophic climate change – and we don’t have long to do it in! I gave a keynote address on this topic at the 15th International Symposium on the Contributions of Psychology to Peace in May this year. After my talk, many participants of my age (!) commented on the similarities between the current climate crisis and the Cold War era when children and youth were deeply affected by the threat of annihilation of life from a nuclear war, and how massive protests helped to shift us from the brink of disaster.

While most people are worried about climate change, not enough are yet translating this into the needed groundswell of active support. Psychology provides insights into the processes of denial and avoidance which underlie inaction

These Symposia are held every two years, typically in areas that are experiencing conflict and violence, to allow mutual learning between international participants and local scholars and practitioners. So this symposium was unusual in being held in Italy, at Sapienza University of Rome and UNICEF Innocenti in Florence. Its theme, Bridging across generations: Turning research into action for children and families, brought a welcome focus on children and young people on the one hand, and on the complex processes of knowledge exchange between research, policy and practice, on the other. Given my involvement in child longitudinal and intergenerational research, and efforts to use research knowledge to influence policy and practice, it fitted my interests perfectly! The interchange between peace psychologists and UNICEF was particularly rich. To build peace or address conflict and injustice, peace psychologists tend to be involved in relatively small interventions and research projects, but with a strong focus on cultural sensitivity, and on ‘building peace through peaceful means’. Whether it was about building the evidence basis on violence-affected children, or analyzing the conditions needed for education for peace-building, the Symposium helped us see how sensitivity to the different socio-cultural and political contexts along with carefully targeted and presented evidence, could result in improved national policies and practices to protect the wellbeing of children and youth. But to me, climate change was the ‘elephant in the room’. I reflected on how much more difficult it will be to build peace and social justice in the era of climate change. In my keynote, I noted the need for urgent action as climate “tipping points” are being reached and surpassed much faster than predicted. We are already seeing increases in the frequency and intensity of extreme weather events like droughts, floods and wildfires, along with increasing temperatures, rising sea levels and melting icecaps. While serious climate change is already locked in, without very speedy global action to reduce greenhouse gases, we will see changes of catastrophic proportions. Climate change will affect us all, but I drew on impressive UNICEF publications to note that those most vulnerable to climate change impacts will be children in the developing world (where 85% of the world’s children live). Mitigation of climate change is an issue particularly for developed countries which are the major emitters of CO2. In democracies, strong popular support is needed to make governments courageous enough to enact the necessary wide-ranging and speedy changes (in power generation, transport patterns, agriculture, and more). 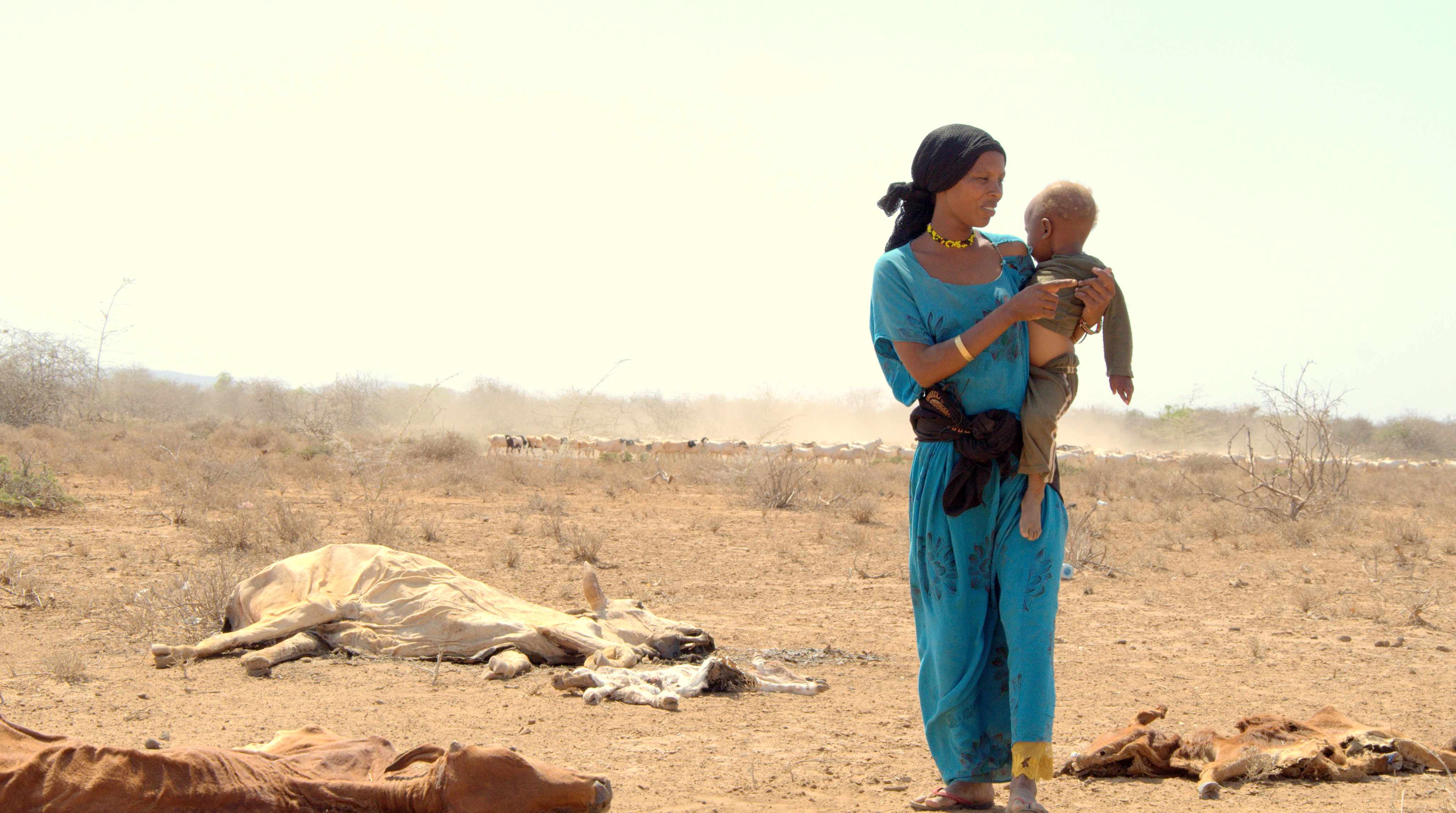 A mother and child in Badanrero Village in Moyale, Marsabit County, Kenya, walk passed the carcasses of their livestock that died as a result of a severe drought that has hit parts of the country.
While most people are worried about climate change, not enough are yet translating this into the needed groundswell of active support. Psychology provides insights into the processes of denial and avoidance which underlie inaction (e.g. Marshall, 2015). It can also help identify ways to stimulate effective action, an example being the ACTIVATE model developed by the Australian Psychological Society. So perhaps psychologists have a particular responsibility to be involved in encouraging more people to become active in efforts to combat climate change. I argued for the active engagement of young people in this process, regarding them not just as victims of climate change, but also as powerful protagonists for change. From a child rights perspective, current climate change decision-making is determining their lives far into the future, so they have a right to know about it, and to be heard, participate and contribute to creating solutions to protect their future lives. Most children and young people are already worried about climate change and how it will affect their future. Being given the opportunity to actively contribute to combating climate change can provide important psychological protection, “helping them to feel more in control, more hopeful and more resilient” (Hart et al., 2014, p. 93). Beck et al. (2009) have developed a useful model of the stages of engagement of young people in dealing with climate-related disasters, involving an incremental process from knowledge and preparedness (how to stay safe in a disaster) to action and advocacy at community and eventually national or global levels.  There are many good examples of climate change programs involving youth participation, co-agency and collaboration (see UNICEF for an example), but their current coverage is patchy considering the global scale of the problem. At the same time, as the world shifts to a zero-carbon economy, young people in both the majority and minority worlds will need to adapt to massive changes in lifestyles – e.g. how we work, consume and travel. How do we prepare young people for these huge changes? I suggested that models of positive development (e.g. O’Connor et al., 2016) and the concept of ‘meaning-focused coping’ could be useful for building capacities of youth to respond effectively as individuals, community members and citizens: e.g. by building their cooperative problem-solving skills; nurturing a sense of empowerment and resilience; developing strong intercultural understanding, empathy and compassion; and learning about responsible political action. Click here to read the abstracts from the 15th International Symposium on the Contributions of Psychology to Peace. Ann Sanson is an Honorary Professorial Fellow at the Department of Paediatrics, University of Melbourne. She is a developmental psychologist with particular expertise in longitudinal research on social and emotional development in children and youth, and has played a leading role in the Australian Temperament Project and Growing up in Australia. Her previous positions include Acting Director of the Australian Institute of Family Studies and Director of Social Issues at the Australian Psychological Society. In her retirement, Ann has turned her attention to advocating for the mitigation of climate change. Explore the UNICEF Innocenti research catalogue for new publications. Follow UNICEF Innocenti on Twitter and sign up for e-newsletters on any page of the UNICEF Innocenti website.