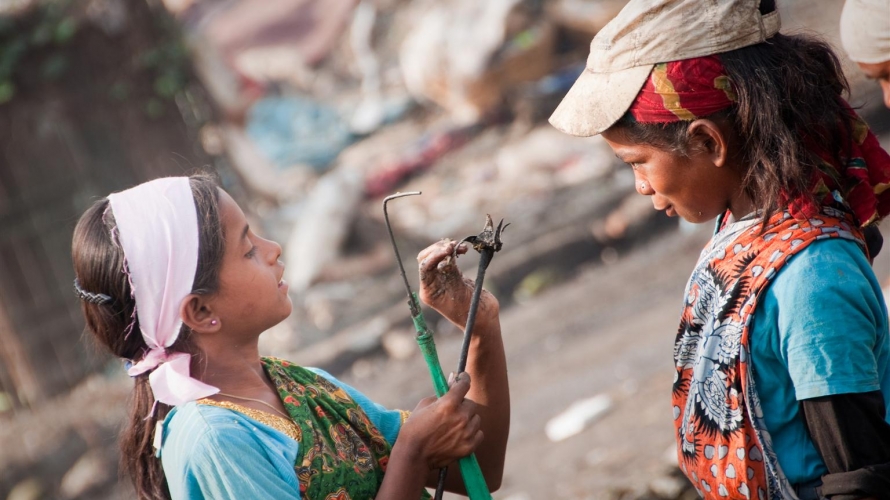 Nasrin (11) fixes her tools for picking through garbage at a garbage dumping site in Dhaka, Bangladesh

Since 2000, the global number of children involved in child labour has dropped by 94 million. While this progress is encouraging, it is not good enough, especially when we consider the immense and long-lasting negative impacts child labour has on child wellbeing. Even more disheartening is the slowing rate of decline during 2012-16 compared to the previous four years. The fact that 152 million children globally are still being deprived of their rights to leisure, schooling, and protection from harm is unacceptable. Protracted school closures and the economic impact of COVID-19 may further compound these figures. Effective action is urgently needed to end child labour in all its forms by 2025 (SDG 8.7). In response, UNICEF Innocenti is undertaking a DFID-funded research project on Evidence on Educational Strategies to Address Child Labour in South Asia. An inception workshop with national experts from India and Bangladesh started to unpack the nature of children’s work and interlinkages with schooling and other aspects of children’s lives. Priorities for new research to identify the most effective strategies to rapidly end child labour were outlined.

Four features of child labour in Bangladesh and India

Despite reductions in child labour, hazardous forms of child labour remain an issue. Data from Bangladesh show that while  the number of children working below the minimum age has declined,  the number of children in hazardous forms of child labour has remained stable. In India, many older children engage in hazardous work. The nature of child labour varies significantly depending on age and gender. Although statistics show that child labour is more common among boys and older children, girls are likely to be equally at risk. Girls dominate certain economic sectors, such as  garment making, cigarette rolling, and hybrid seed production. They also engage more intensively in unseen and typically unpaid domestic work, and are particularly vulnerable to some of the worst forms of child labour, such as commercial sexual exploitation, which are difficult to capture with standard surveys. Child labour is typically concentrated in ‘hotspots’. Both Bangladesh and India have concentrations of child labour, where children often work in highly exploitative conditions. Often driven by internal migration—with children leaving their homes to take up work in towns and cities—these locations include industrialized areas, such as Dhaka (Bangladesh) and Secunderabad (India), as well as the rural tea gardens of Sylhet and Gujarat’s cottonseed fields. Here, children are highly likely to be out of school or to encounter difficulties when attending school, mostly due to language barriers in classrooms. Many children combine school and work. This impacts both their progress in school and, consequently, their chances of escaping poverty through education. [caption id="attachment_2577" align="aligncenter" width="1024"] 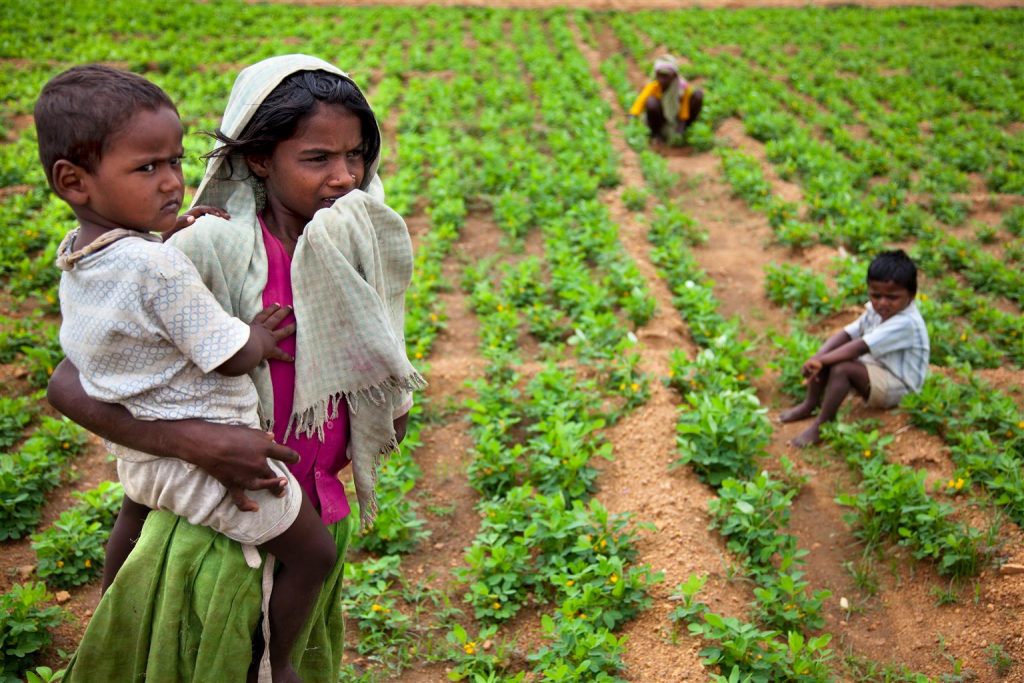 Urkundamma (12), who has never been to school, cradling baby brother in a peanut farm in India.[/caption]

Over the past two decades, access to school has significantly improved both in India and in Bangladesh. While this has contributed to reductions in child labour, challenges remain that hinder further progress. Significant numbers of children remain out of school. Furthermore, learning achievements are low even among children in school. In India, about 50 per cent of children who completed primary school are able to read a three-sentence passage. This figure decreases to 34 per cent in Bangladesh. School dropout and poor quality of education have implications for employment outcomes, including skills mismatch and higher vulnerability to exploitative and hazardous work. Together, these findings suggest that further improvements in education access and quality can reduce child labour. For example, programmes that address perceived costs and benefits of education have significant effects at low costs.

To end child labour, we need to know more

Stronger and regularly updated data on the intersections between child labour and education in India and Bangladesh are needed to assess changes over time. Definitions should follow international standards to allow comparability across countries. Surveys to assess the amount of time children spend on household chores and leisure activities are needed. Qualitative data can help explain the links between schooling and work and draw attention to ‘invisible’ child labourers, including street-connected or trafficked children. Data must be disaggregated (by gender, age, social group, and migratory status) to better assess the specific education challenges and child labour risks of vulnerable groups. More research is needed to rigorously assess the impact of educational strategies on child labour in India and Bangladesh.

Lockdowns to contain COVID-19 are likely to have long lasting negative economic effects on households and their children. Both Bangladesh and India have large informal sectors that have been hard hit by restrictions on movements. The loss of livelihoods, particularly for migrants, combined with school closures, will likely increase school dropout and child labour. Remote online learning is not an option when less than 25 per cent of children in India and Bangladesh have internet access. Now more than ever, we must assess which schooling solutions improve learning, while also reducing child labour. Significant and strategic investments in effective education policies and programmes can not only ensure that children return to school after lockdowns, but also play a vital role in ending child labour in South Asia.