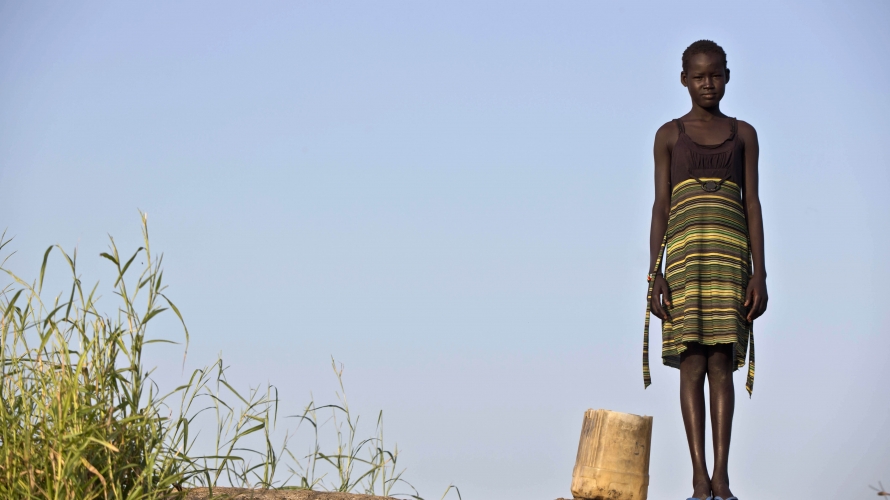 A young girl stands with her water container near a UN Protection of Civilian Camp in Bentiu, South Sudan. Thousands of people have fled to the camp to avoid fighting between rebel and government soldiers. The camp is now home to 105,000 people.

The UN recently raised a red flag that we are heading for one of the worst humanitarian crises since 1945. 20 million people in four countries – South Sudan, Somalia, Yemen and Nigeria – face the risk of famine. The world could witness horrors again. Adding to our concern is the prediction that climate change will bring even more weather variability to these regions, interacting with many complex, man-made conflicts and risks. Children are among the most vulnerable: some will not survive and others will suffer the consequences of undernourishment, including stunting. The severe consequences of neglecting the needs of a child during their first thousand days, is well evidenced. The message about the importance of the first thousand days has echoed widely – perhaps to the point where concerns may be raised about the policy implications being overstretched.

The world has witnessed famines before. Publicly available household survey data sets, such as UNICEF/MICS and DHS, enable us to shed additional light on the long-term consequences. An article in the American Economic Review (R. Akresh et.al. 2012) presents evidence of the long-term impact of exposure to the Biafra famine (Nigeria 1968-70). The outcome measure is height among adult women, with height loss well known to be a strong predictor of a range of adverse impacts. The study takes into account the regions and ethnicities most exposed to the famine, as well as the age at exposure and its duration. As expected, those women who were exposed to the famine as infants, are shorter, with the impact estimated to be minus 0.75 cm. Far less expected is that the height impact on those exposed as adolescents – the second period of life marked by a strong physical growth surge – is much greater, an astonishing minus 4.5 cm! The finding should raise some eyebrows, as stunting is almost exclusively discussed as a phenomenon linked to undernourishment among infants; much more rarely as a phenomenon developed in adolescence. 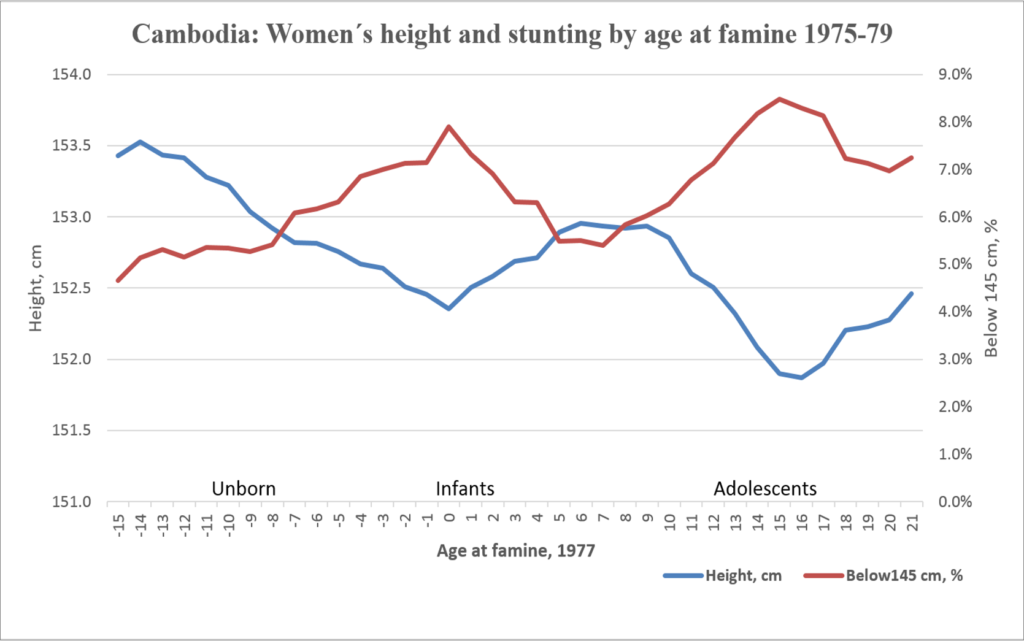 Source: DHS, all available Cambodia data sets (rounds 2000/2005/2010/2014). Lines based on five-year rolling averages by age at exposure, using 1977 for age 0. Minuses if unborn (-5=born 5 years after 1977). All women above 20 at time of survey are included.
The graph above conveys a highly simplified visual replication of the Biafra findings, related to another tragic famine: Cambodia 1975-79. In terms of excess mortality its estimated impact is 1.5-2.0 million. In an overview of 20th century famines (S. Devereux 2000) the Cambodia famine stands out in terms of its magnitude and the share of the population that was affected. In a spirit of simplicity, the above graph plots the average height of women (blue line) and the prevalence of adult female stunting (<145 cm, red line) against age in 1977. That year is chosen for being the mid-year of the 1975-79 episode. Data on height and year of birth has been brought together from all available Cambodia DHS surveys. All estimates are national averages; no adjustments have been made of more or less exposed regions or population groups, nor for the length of the exposure to the famine (both adjustments would probably further underscore the message conveyed by this graph). The graph echoes the message from the cited Biafra study: There is, as expected, an anthropometric impact of famine on those exposed as infants, but surprisingly even more so on those exposed as adolescents. These findings lend themselves to a number of interpretations. A first could be that excess mortality primarily affects infants, which implies that those most severely affected by famine are no longer with us in the data-sets we use. Additional research could probably indicate the extent to which this is a factor at play here. However, notwithstanding its importance, this does not diminish concerns over adolescent vulnerability. A second interpretation could be related to the much debated issue of catch-up growth. A recent study by Young Lives – based on longitudinal data from Peru, India, Ethiopia and Vietnam – does lend further support to earlier results, which indicate catch-up growth among adolescents who were stunted as infants. So one interpretation may be that we see less height impact on those exposed as infants in the graph above, or in the Biafra study, because catch-up growth has taken place. Furthermore, it may be that catch-up growth does not repair other detrimental impacts of infant stunting, and that the curve somehow masks that. The fast brain development of infants is often cited as a specific cause of concern. However, recent brain science research tends to emphasize the crucial brain growth that also occurs during adolescence. The research on the long-term consequences of stunting depending on at which age it occurs, have important contributions to make here. In any case, the notion of catch-up growth underscores one unique aspect of adolescents’ vulnerability to famines: Adolescents will not be given a second opportunity to grow. A third interpretation of the graph above, not necessarily incompatible with the first two, could be that adolescents are indeed disproportionately neglected during famines.  Concerns over such biases are not new (P. Salama 1998). Infants require less food and are possibly given more attention by immediate caregivers, as well as by emergency relief operations, while adolescents tend to be treated as adults, despite their nutrition-related vulnerability. If this is the case, then policies and practices need rethinking. At UNICEF Innocenti, we were considering setting up our own research project to add more evidence and nuance to the issue discussed here, including replicating it with more precision for other outcome variables and to other incidents of famine. However, given the urgency of the matter, we have chosen to share these incipient findings and puzzles, in a blog. We invite the research community to help us sort out this issue, urgently. Please share your findings and research plans in the comment field below, or contact us directly! If there is a sufficiently strong response, we may consider setting up an Innocenti conference on “Famines and anthropometric impact on adolescents,” hopefully soon enough to make a difference, as the world responds to the upcoming humanitarian disasters. Goran Holmqvist is Associate Director and Audrey Pereira is a consultant at UNICEF Innocenti. Explore the UNICEF Innocenti research catalogue for new publications. Follow UNICEF Innocenti on Twitter and sign up for e-newsletters on any page of the UNICEF Innocenti website.