How will COVID-19 disrupt child well-being in Southern and Eastern Europe and Central Asia? 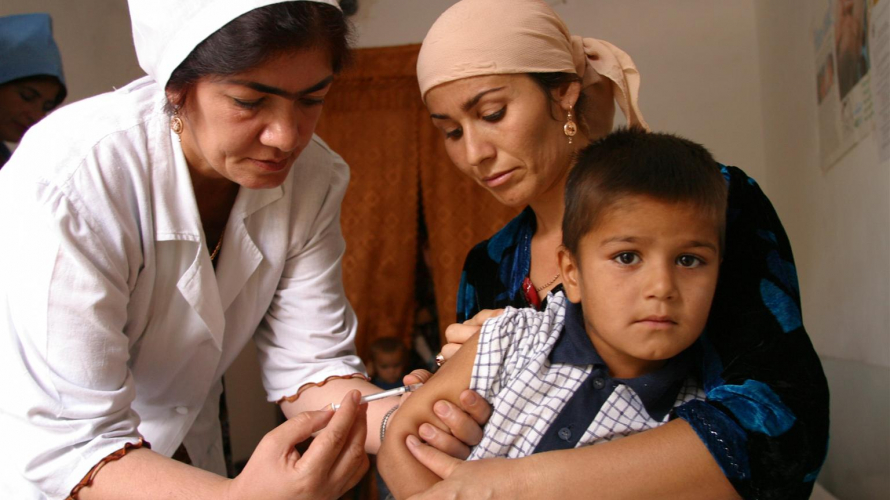 Using an auto-disable syringe, a woman health worker vaccinates Shahriyor, 5, against measles, at a children's polyclinic in Vose District in Tajikistan.

The story of the COVID-19 pandemic is one of vulnerability, in which those with pre-existing deprivations are likely to suffer most. While the full range of economic and social consequences of the crisis are yet to emerge, it will undoubtedly affect many children, by exacerbating existing vulnerabilities and their underling conditions. Table 3 from the report below shows the country performance with regard to child well-being outcomes and the vulnerability they pose during the current COVID-19 pandemic. 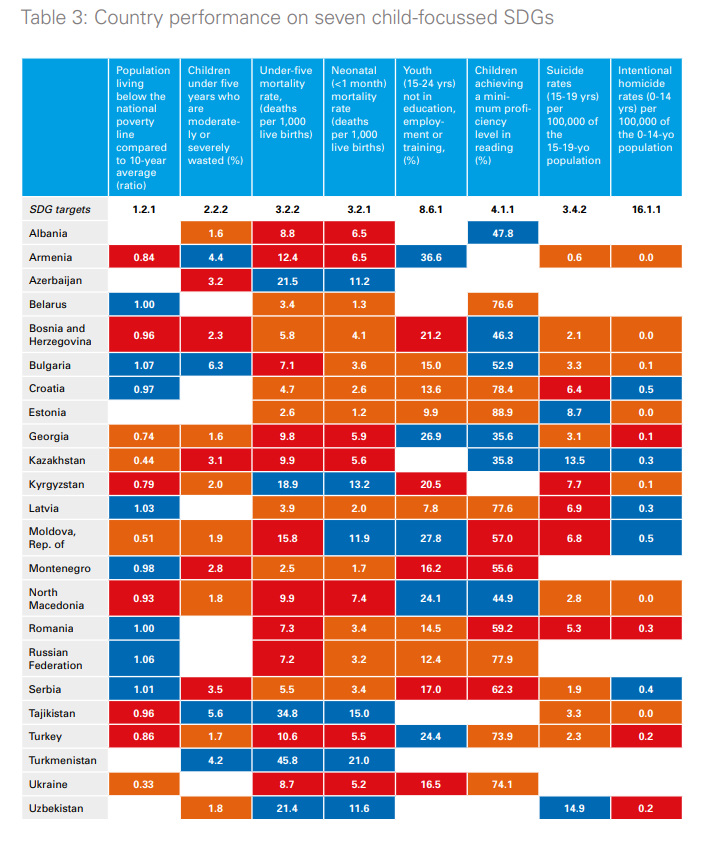 UNICEF Innocenti is engaged in an intensive rapid research effort to generate evidence to increase understanding of what the COVID-19 health crisis means for children and their families. We have recently published a research report highlighting some of these findings for countries in Southern and Eastern Europe and Central Asia (ECA). An analytical exercise on Supporting Families and Children beyond COVID-19 offers a look on the effects of the COVID-19 crisis on early responses, by exploring the economic, social, and demographic preconditions and how they interlink with child well-being outcomes.   How is child well-being likely to be affected by a sudden change in the country’s GDP? Looking at the association between COVID-19 and GDP, the study undertakes an empirical analysis on a set of macroeconomic dimensions mirroring child-relevant targets across SDG areas of poverty, nutrition, infant mortality, education, youth employment and training, and youth violence. Drawing from previous economic crises, it is expected that GDP will likely fall in the region, and be protracted in some contexts. According to World Bank predictions, it is expected that worst-hit countries in the region with respect to GDP fall will be Croatia (-9.3), Bulgaria (-6.2), Russia (-6.0), Romania (-5.7), Albania (-5.0), and Hungary (-5.0). Smaller economies, such as Turkmenistan, Uzbekistan, Tajikistan, and North Macedonia should be affected less. Taking the last world-wide economic crisis as the baseline, the current downturn is expected to last for at least two years and the recovery may take as long as 10 years for many countries. These trends project medium- to long-term risks to children and their families, which may impede the SDG progress towards the 2030 deadline. Our research found that GDP effects many child outcomes in the region. For ECA countries, a higher GDP is actually linked to higher levels of child poverty, in that higher economic wealth comes along with relatively higher levels of income poverty among children. This is a common trend across the region, but there are exceptions, as in the case of Belarus, Serbia, Ukraine, and Bosnia and Herzegovina, where the relative economic wealth is matched by comparatively lower levels of child poverty. Faring better in child poverty reduction in relation to economic wealth is largely due to social protection investments of these countries, as shown in Figure 7. 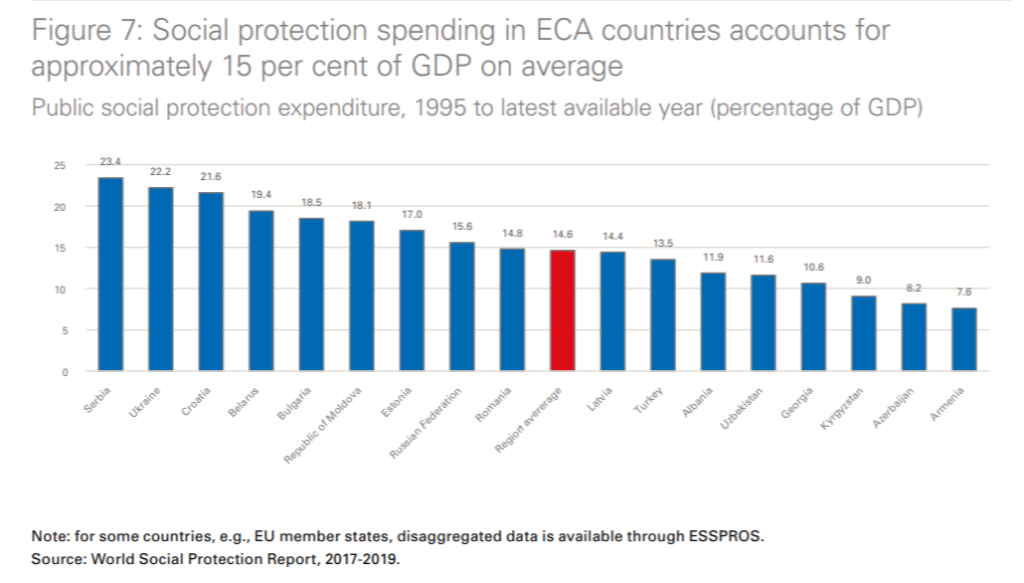 Rapid economic growth frequently leads to the unequal distribution of wealth, and where there is inequality, poverty follows. Indeed, findings show that higher levels of child poverty are always seen when there are higher levels of income inequality (measured by Gini) in ECA countries. The notable exception to this trend is Belarus, where despite a lower income inequality rate, there is a fairly large proportion of children living in poverty. Lower GDP is linked to higher levels of youth not in education, employment or training (NEET), and high neo-natal, and under-five mortality in ECA countries. The COVID-19 health crisis is exacerbating child vulnerabilities by reducing economic growth. The economic shocks will be felt by families and children unequally, with those at risk of infant mortality, extreme poverty, and young people in the labour market most likely to be affected than the average population. How is child well-being affected by other preconditions? Several economic and social preconditions are likely to moderate the effects of the crisis on child poverty and well-being in the region. Lower income inequality, higher employment rates, and a sizeable service sector will likely fare better during the pandemic. Younger children are at a higher risk of poverty, as this age group often receives less social protection support both in normal times and during the pandemic. Furthermore, poorer children’s health outcomes are associated with higher rates of out-of -pocket costs, and lower healthcare service capacity. However, these preconditions are also affected by the crisis and would need monitoring and stabilising mechanisms. What will ECA children miss as a result of COVID-19? Children will struggle to improve their living standards. Considering the contractions in economic growth following the COVID-19 crisis, it is expected that the poorer children in ECA countries would have a higher sensitivity to reduced economic growth than the average population. This means that a contraction in the GDP is likely to exacerbate the incidence of poverty and income inequality across the region. Youth will have difficulties finding a job. Since 2006 the average NEET rate has stood at 21.5 per cent, or put differently: around one in five youth have not been in education, employment, or training in the region. A contraction in the country’s overall GDP can pose a serious challenge for the future ability of youth to access the labour market in ECA countries. An unexpected contraction in GDP can have detrimental effects on child health outcomes. Across the ECA region since 2006, an increase of 1 per cent of GDP per capita is associated with a fall in under-five child mortality rates and homicide rates.  The COVID-19 crisis continues to put pressure on national health systems of ECA countries, which disrupts the coverage of medical interventions and the delivery of routine health care during the early stages of children’s lives. Unless mitigating policies are put in place, the pressure on health systems will have serious repercussions for child and infant mortality. What needs monitoring and improvement? Lessons from previous crises show that expansionary and universalistic social protection responses have contributed to protecting children from the worst effects. To respond to challenges that children and families face within the COVID-19 context, policy responses need to focus on expansionary social and fiscal measures to increase consumption and investments in children and families. The universal coverage of social protection benefits for children in times of COVID-19 is not currently being achieved in any of the ECA countries. Austerity measures should be entirely avoided when it comes to children and their families. 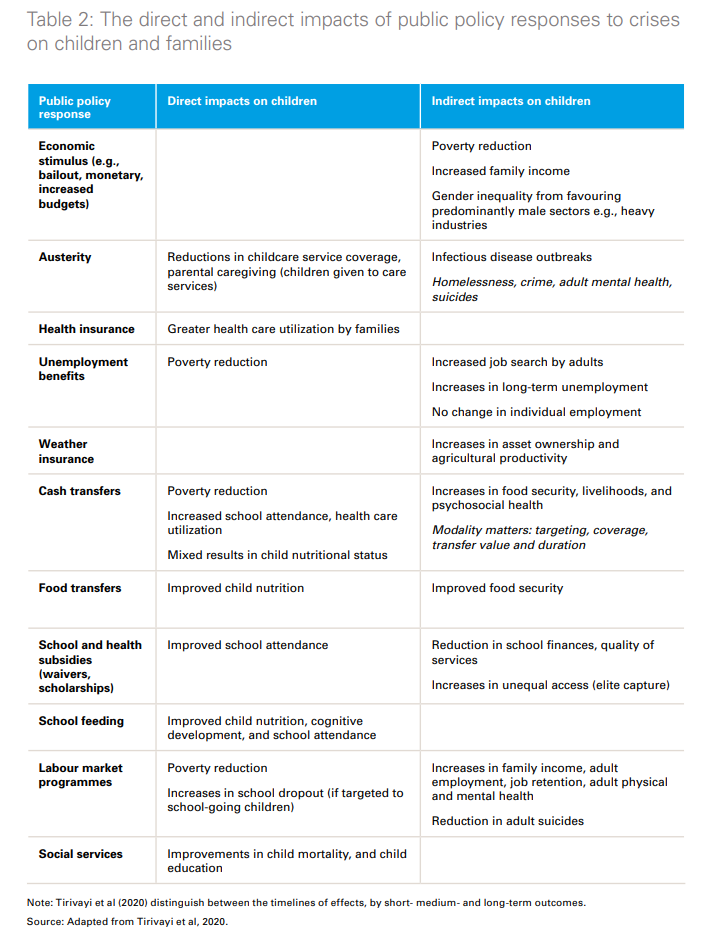 Issues of quality of services and staffing in the health sector matter and should be scrutinized and accounted for at a country level. The evidence and reflections are based on existing data. Additional empirical evidence in the region is required to account for a diverse range of child outcomes in the context of COVID-19 pandemic.