It’s Payday! What a cash transfer looks like in Ghana 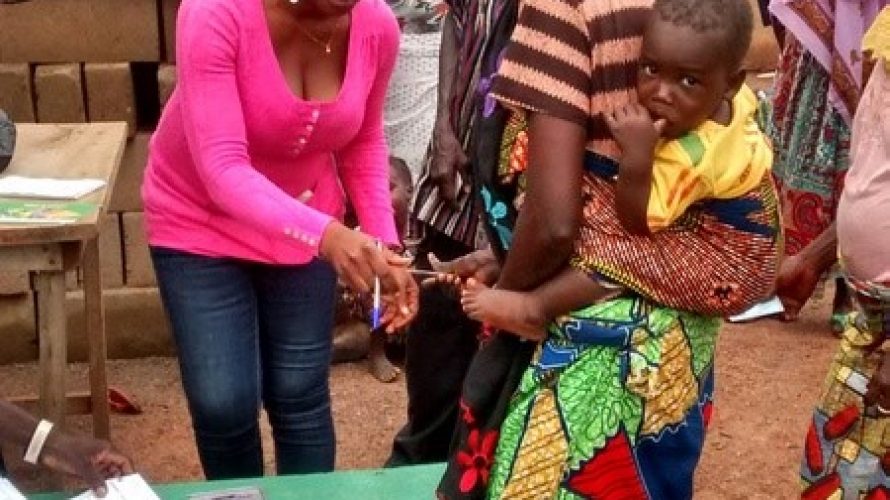 Cash transfer programs have become an increasingly popular component of social protection strategies across sub-Saharan Africa. These programs provide monthly payments to poor and vulnerable households and can lead to multiple demonstrated benefits, such as the improvement of health and education among young people, and impacting the local economy. Recently, the Government of Ghana expanded the Livelihood Empowerment Against Poverty (LEAP) Program, which assists extremely poor households (defined by those that live on less than $1.10 USD per day) that contain orphans and vulnerable children, the elderly and those with disabilities. The expansion, known as LEAP 1000, now includes extremely poor households with pregnant women and infants and focuses on children in the first 1000 days of life. Through the cash transfer payment, LEAP 1000 is expected to improve children’s nutritional status and reduce stunting, both common problems in Ghana. Social cash transfers have been implemented widely across Africa. To gain a better understanding of how the program in Ghana is implemented, I observed several payments over the first week of LEAP 1000 in rural villages in Northern Ghana. Through a translator, I also had the chance to speak with many of the program beneficiaries before and after their actual payment. Each of the cash payment stations had a slightly different atmosphere and took place in locations familiar to the recipients: a classroom, under a tree, or a pavilion used for village gatherings. The process for payment was quick and efficient: the women were called five at a time; they provided identification, made their thumbprints and then were given a payment for a two-month period. A team that included the District Welfare Officer, a postmaster and a LEAP 1000 focal point all took part in handing out and verifying payments. A police officer was also present at all times to ensure the security of the transactions and stood off to the side at the pay points. 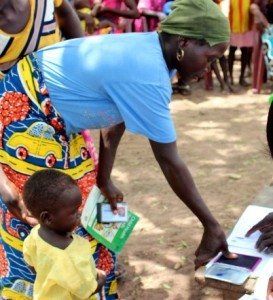 LEAP 1000 beneficiary provides thumbprint at payment
Payments were a somewhat public affair; all the women arrived with their babies and often older children while a few men stood at a distance. What struck me instantly was that every payment was conducted in a very quiet, orderly fashion, even with all the babies in tow! Because of this, the women and potentially some other community members could hear the amount of the payments going to each household. My western mentality automatically questioned the privacy and safety of the process, but no one seemed to mind. I was also told by the payment team that there were no reported cases of theft during or after payments of the existing LEAP Program. As the women received their payments, some lingered to talk with others, but many left straightaway. The police officer was there “just in case”, and after watching a few payments, I could not imagine that he would be needed. The women I observed did not have to walk very far to the payment point. For those who were sick or injured, a designated family or community member could receive their payment on their behalf. In one particular case, the village chief collected money for a woman who could not come. While this may raise some suspicion, I recognized that the openness and transparency that initially gave me concern about the process also creates a level of peer pressure for everyone to be quite truthful. Neighbours would not allow for dishonesty, and in all likelihood, any attempts to defraud the system would quickly be revealed to the team. The operational procedure did not come without its challenges. While the actual delivery of the payment is fast, some women I spoke with waited for several hours before the team arrived, taking them away from their children and their daily tasks. To avoid time costs and inconvenience to women, program managers are working to improve scheduling for future payments. Another obstacle was that many of the women did not know the exact amount they were going to receive ahead of the payday, so some of them did not have specific plans on how they would use or budget the transfer. However, an explanation just ahead of the payment was given, so it was clear what each household was receiving and why. Overall, the women said that the improvement of the well-being of their children was their ultimate goal. Even without knowing the cash transfer amounts, they said they wanted to start businesses to increase their income, or buy, rear and sell livestock, and purchase household staples at the local market, which would in turn benefit their families. Currently, a mixed-method, long-tem  impact evaluation is being conducted by the Transfer Project. The evaluation, which will be carried out over the next 2 years, will give us more insight into whether and how the program is improving children’s nutritional status and household. In the meantime, a sense of opportunity and hope could clearly be observed among the LEAP 1000 recipients in Northern Ghana.   Michelle Mills is at the UNICEF Office of Research in Florence.