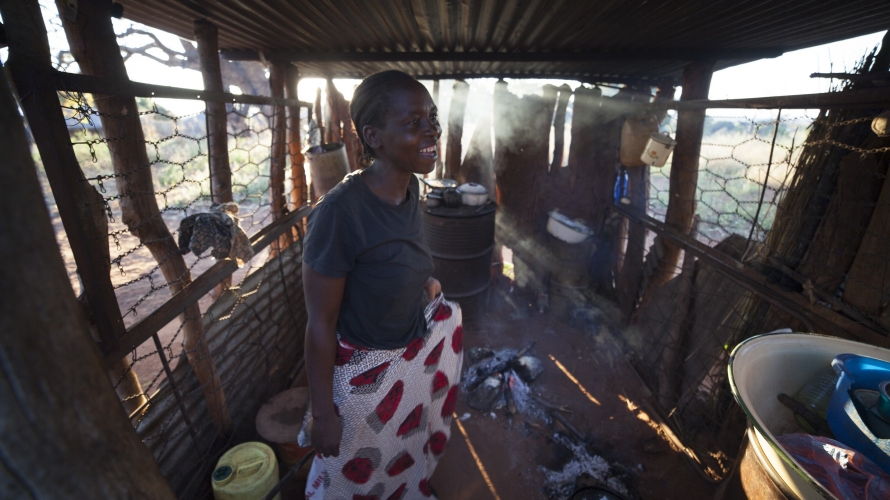 Last Fall I visited three of the most poverty-stricken rural districts of Zambia: Kaputa, Kalabo and Shangombo. Each location took two days’ travel by car from Lusaka. We drove up to Kaputa, near the border with DRC, with a stock of jerry cans filled with fuel, passed through the Kafue National Park and crossed the mile-wide Zambesi river and then crossed the soft sands (and mud) of Western Province, approaching the Angola border, to reach Kalabo and Shangombo. The objective of the mission, with dozens of national researchers, was to collect data from over 2,000 women as part of the evaluation of the Government of Zambia’s Child Grant Programme. The Child Grant Programme is an unconditional cash transfer scheme, targeted to mothers in households with a child under the age of five which provides beneficiaries a flat transfer of approximately 24 USD on a bi-monthly basis—a substantial amount, representing an increase of 27 per cent of the household’s pre-programme monthly consumption. 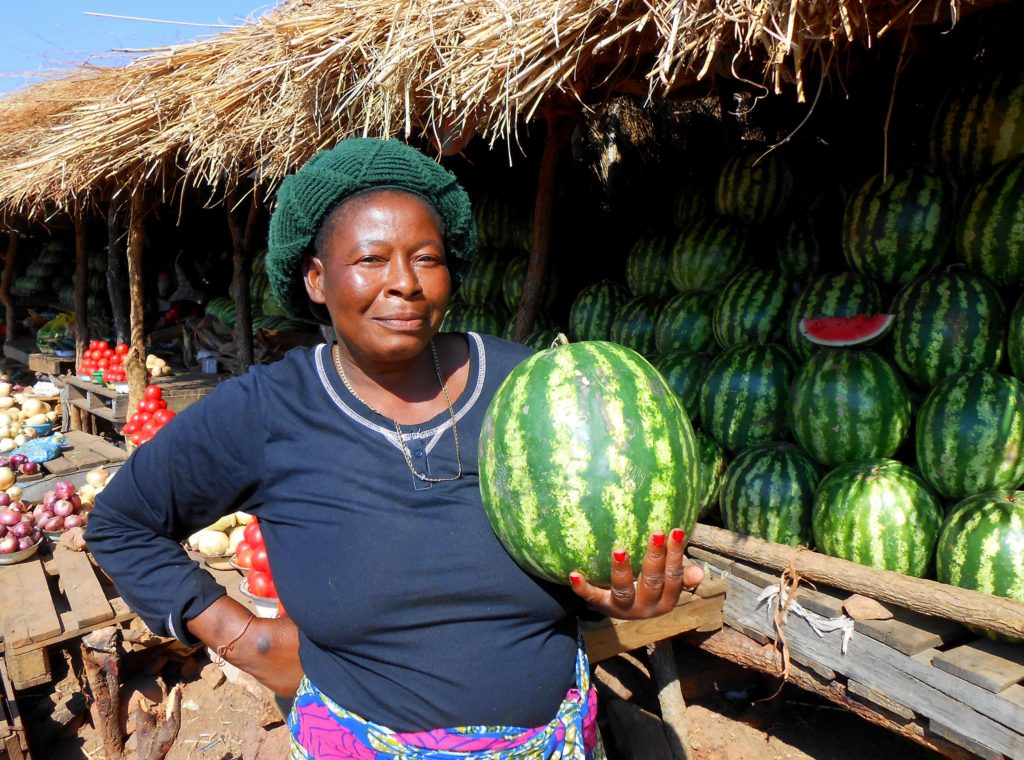 Beneficiary of the Social Cash Transfer Programme in Zambia - Makalanguza Village. Likezo Maingolua opened a little shop in the local market thanks to the support received by the Government.
This was not the first time we had visited these women. The evaluation project which had been initiated in 2010 via a randomized control trial, has up to the present collected four follow-up rounds of data to show impacts over four years. The findings have been impressive. Results have shown both productive and protective impacts, as well as a sizeable multiplier effect, demonstrating that household spending has increased at levels higher than the value of the transfer received. The positive results witnessed in Zambia are not an anomaly. Cash transfers have gained a prominent role in the international debate around poverty and inequality, based on extensive evidence of their many positive outcomes: increasing consumption and food security, improving schooling and even fostering productive investments for the poor. They have even been suggested as a benchmark against which to compare other programs and interventions (see here and here).

Do the positive impacts persist once payments end, or do they dissipate?

Most of the literature however, reports on short- or medium-term impacts, thus we know little about long-term impacts. For example, do impacts accumulate exponentially with additional transfers, or do they plateau over time (or even decrease as households become accustomed to support)? Even more interesting: Do the positive impacts persist once payments end, or do they dissipate? Do households strengthen their livelihoods, to sustain consumption and “graduate” out of poverty or do they bounce back to their pre-programme living standards? How much support is needed for the ultra-poor to boost them out poverty and place them on a higher wellbeing trajectory? These are some of the questions we went back to find out in Zambia. The study, led by the University of North Carolina, in collaboration with us at the UNICEF Office of Research—Innocenti and Palm Associates, takes advantage of the fact that in 2015, the Government of Zambia decided to modify their cash transfer targeting. The new target group, consisting of labour-constrained households, is currently being implemented via nation-wide scale up aiming to cover over 700,000 households in 2018.

An interview in the Shangombo District in Zambia with a Child Grant Program beneficiary.
This means that households in the evaluation pilot districts kept receiving transfers up until 2016, when the re-targeting process was carried out. The fact that beneficiary households stopped receiving the grant in 2016, provides a unique opportunity to rigorously examine whether cash transfers can break the cycle of intergenerational poverty after the intervention has ended, seven years after collection of baseline data.

The findings have been impressive. Results have shown both productive and protective impacts, as well as a sizeable multiplier effect,... household spending has increased at levels higher than the value of the transfer received.

Why are we so excited about these findings? Too often, we miss the opportunity to evaluate whether impacts are sustained post-intervention, and thus the literature is scant and inconclusive on whether cash transfers can lead to longer-term welfare improvements. Despite the paucity of evidence, there are a number of studies which have tackled these questions. Encouraging findings come from Stoeffleret al. (2016) who shows that an 18 month unconditional transfer pilot in rural Niger showed sustained impacts on assets and productive activities 18-months after transfers end. Positive long-lasting effects were also found for two conditional cash transfers in Nicaragua which show that impacts on child development outcomes persist even after the transfers end (two and seven years after respectively, see here and here). Sustained effects, albeit mixed, are also found by Roy et al. (2017) who studied the 6 to 10-month post-intervention impacts of cash or food transfers delivered for two years (both with and without nutrition behaviour change communication), on intimate partner violence in Bangladesh. Whereas there is no impact for women receiving transfers only, physical violence was reduced in the behaviour change communication arms. Similarly, Baird et al. (2016) investigate the durability of impacts from two-year conditional and unconditional transfers targeted to adolescent girls and young women in Malawi, returning more than two years after the termination of the program. Most impacts dissipated over time in the unconditional cash transfer treatment arm, however the conditional arm had some long-lasting effects, including on educational attainment and total number of births—interestingly, only for girls who were out-of-school at baseline. Evidence on the post-intervention effects of a one-year scholarship combined with a conditional cash transfer on schooling and child labour outcomes in Nepal is less positive, indicating no permanent impacts 17 months after the final disbursements. Therefore, although we have some evidence from post-intervention studies, it is mixed and with few examples across geographic regions, program types and outcome domains. There are several key factors in understanding if effects persist beyond the intervention. Cash transfers should either: 1) permanently improve beneficiary households’ financial position (by allowing the household to access credit, save money or accumulate wealth), 2) lead to productive and human investments or 3) catalyse significant behavioural change in other relevant domains. These factors facilitate returns to be maintained or even increase over the long-term. So, what happens when the money runs out? This is an extremely important question for the development community, relevant not only given the rise of cash transfers worldwide, but also because of related policy implications. Answering this question allows us to understand whether the effects of cash transfers are only short-lived or sustained after the transfers end. It also contributes to the contentious

debates around graduation, by helping to shed light on whether benefits from cash transfers are only good for coping with chronic vulnerability or consumption smoothing, or whether they can bring transformative effects and help beneficiaries lift out of poverty. Once the latest round of evaluation in Zambia is completed it will be the longest ever panel of post-intervention impacts in the African region, and the only one to our knowledge examining the longevity of a Government operated cash transfer. At UNICEF Innocenti we are thrilled to have the opportunity to examine this important issue and are looking forward to analyzing the incoming data. Stay tuned for results!   Luisa Natali is a Social and Economic Policy Consultant at the UNICEF Office of Research – Innocenti, where she works on social protection, mainly on the evaluation of cash transfer programmes in Sub-Sahara Africa. Explore the UNICEF Innocenti research catalogue for new publications. Follow UNICEF Innocenti on Twitter and sign up for e-newsletters on any page of the UNICEF Innocenti website. For more information on cash transfers visit the Transfer Project. Check out this infographic on ‘Cash transfers myths vs reality’ for quick facts. Follow Luisa on Twitter at @luisanatali and The Transfer Project at @TransferProjct. The Principal Investigators of the long-term follow-up are Sudhanshu Handa of UNC and Gelson Tembo of Palm Associates with funding from UNICEF Zambia, 3IE and Sida via research grant to the UNICEF Office of Research—Innocenti. Thanks to Amber Peterman for her contribution to this blog.