Do social services contribute to peacebuilding? 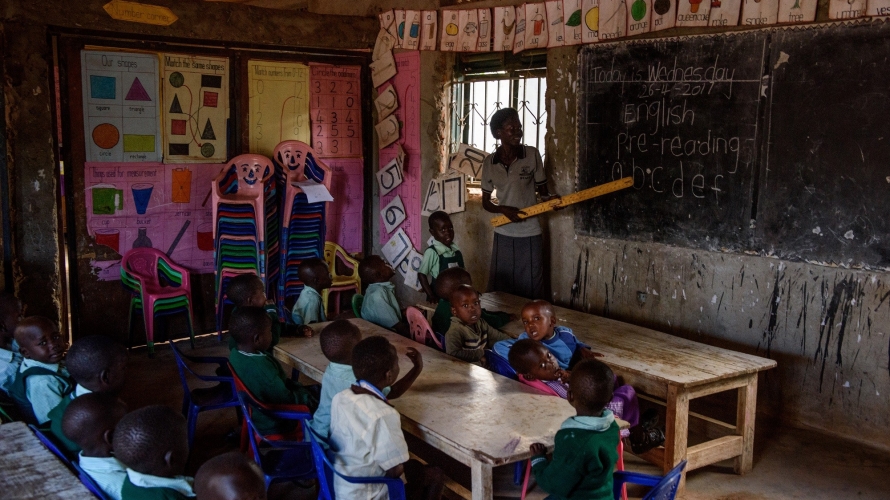 Although its preamble mandates the United Nations to “… save succeeding generations from the scourge of war…”, peacebuilding discourse has traditionally paid little attention to the role social service providers can play in mitigating the drivers of conflict. Things began to change in 2009 when the UN Secretary General – in his Report on Peacebuilding in the Immediate Aftermath of Conflict – listed the provision of administrative and social services among the five recurring priorities for peacebuilding in the years immediately following conflict. The recent Report of the Peacebuilding Commission, endorsed by both the General Assembly and Security Council, also asks for all UN agencies to contribute to, and for social services to be leveraged for sustaining peace. UNICEF has also begun to actively explore the role it can play in strengthening social cohesion and peace. From 2012-2016 – through an innovative programme called Learning for Peace funded by the Government of the Netherlands – UNICEF and government counterparts from 14 fragile and post-conflict countries designed context-specific education programmes that would mitigate conflict factors identified through prior conflict analysis.

The recent 15th International Symposium on the Contributions of Psychology to Peace, Bridging Across Generations: Turning Research into Action for Children and Families – co-hosted May 2017 by UNICEF  Innocenti and Sapienza University – presented a valuable opportunity to pause and reflect on the potential of social service providers to meet the developmental needs of children and, at the same time,  support the transformation of relationships between individuals and groups. UNICEF programmers must be mindful of both the socio-emotional implications that violence has on victims, as well as the root causes and psychological processes that motivate individuals and groups to discriminate or harm others. The Symposium highlighted systemic challenges that educators and psychologists experience as they seek to identify pathways to reduce inter-personal, group and systemic or ‘structural’ violence. Psychologists recognize that basic human needs must be met in order to raise caring, non-violent, optimally functioning children and citizens. They acknowledge that child maltreatment constitutes the most severe environmental hazard to children’s healthy development. Yet, as structural violence is a key contributor to child maltreatment, there is a need to identify policies and systemic interventions at the macro level that are capable of mitigating conflict factors. The Bridging Across Generations Symposium presentations helped to highlight this micro/macro divide. One of the conclusions, based on research on the families of victims of Italian terrorist attacks highlighted in the Symposium, was that Italians continue to suffer as a result of a perceived failure of the State to identify, prosecute and convict the perpetrators. Where state and society are unable to deal with the past, intrapsychic reconciliation also remains impossible. At the same time, the Symposium presented case study research that illustrated how contemporary governments have used formal and informal education systems: to disseminate Truth Commission findings and recommendations about past human rights violations in schools and universities; for financing reparation programmes for communities who had suffered from human rights abuses; and by funding education reforms that support and train teachers and civil society to teach about the past. Peace psychologists should assess the psychosocial benefits of a political economy that makes quality education equitably accessible, culturally and socio-economically relevant, participatory and inclusive. We also need to study what allows schools to become social spaces where children and young people from different identity groups can connect, engage, and think critically about the past and contemporary social challenges. The peacebuilding and psychosocial benefits of such governance frameworks are rarely documented. However, a recent analysis by FHI360 illuminated the links between education inequality and conflict, showing that the absence of education equality can double the likelihood of violent conflict risk, while gender equality in education is likely to reduce the risk of violent conflict by up to 37 per cent. 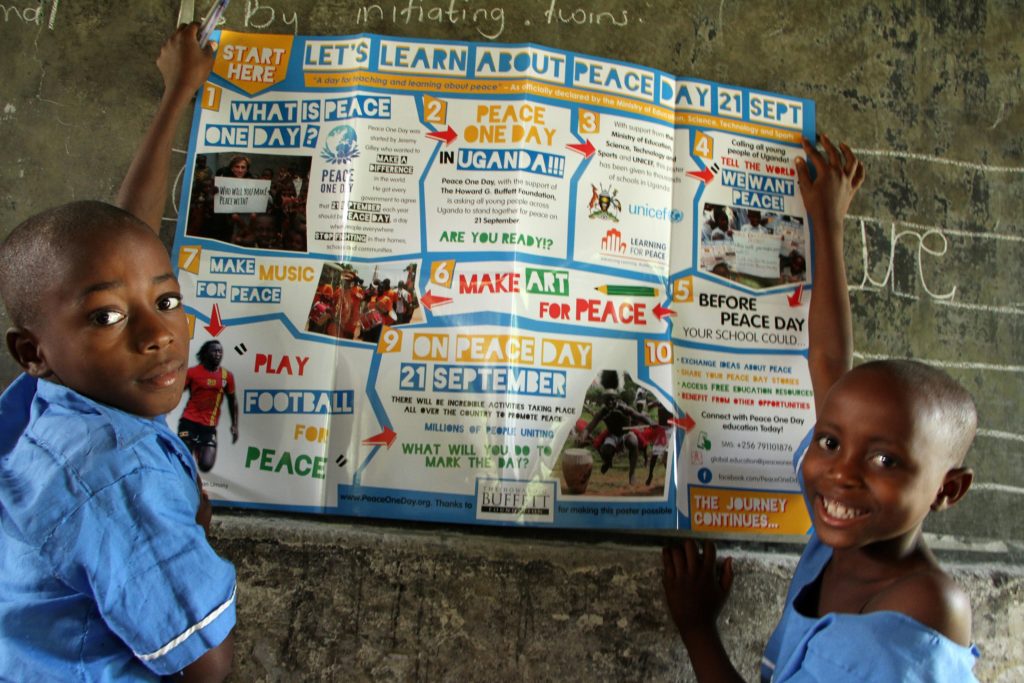 Pupils of Buhundu Primary School located in Bukonzo sub-county, Bundibugyo District, read Peace Day messages on the International Day of Peace observed annually on 21 September. Observance helps to raise teacher's awareness on peace building as well as encourage them to utilize elements of the curriculum to promote peace in the classroom.
The Bridging Across Generations Symposium also reflected on the psychological implications resulting from the possible failure of climate change mitigation and adaptation. A 2016 Global Risks Report published by the World Economic Forum argues that climate change could spark large-scale involuntary migration and profound social instability. Children – biologically and psychologically most vulnerable – will suffer most from a chain reaction of interlinked stressors (including conflict) which will be triggered by extreme weather events. Peace psychologists need to ask how communities and caregivers can be assisted in adapting to and managing stress in the face social disruptions, displacement, lack of access to health care, schooling, food, and increased poverty. They will need to remind young people – as Ann Sanson argues – that they not only are “… among the greatest victims of a warming world, but are also the most powerful protagonists for change.”  As communities around the world face decades of increased shocks and stresses, it is important that both peacebuilders and development planners appreciate the psychological possibilities and limitations of their development interventions – not just at the interpersonal level, but also at the inter-group and systemic/structural level. Social services delivery and governance in fragile contexts requires technical effectiveness and efficiency, but also sensitivity to the psychosocial impacts of services on the communities and regions they aim to support. Friedrich Affolter is an Education Specialist at UNICEF’s Programme Division in New York. Click here to read the abstracts from the 15th International Symposium on the Contributions of Psychology to Peace. Visit Learning for Peace for more information as well as research products and guidance notes. Explore the UNICEF Innocenti research catalogue for new publications. Follow UNICEF Innocenti on Twitter and sign up for e-newsletters on any page of the UNICEF Innocenti website.