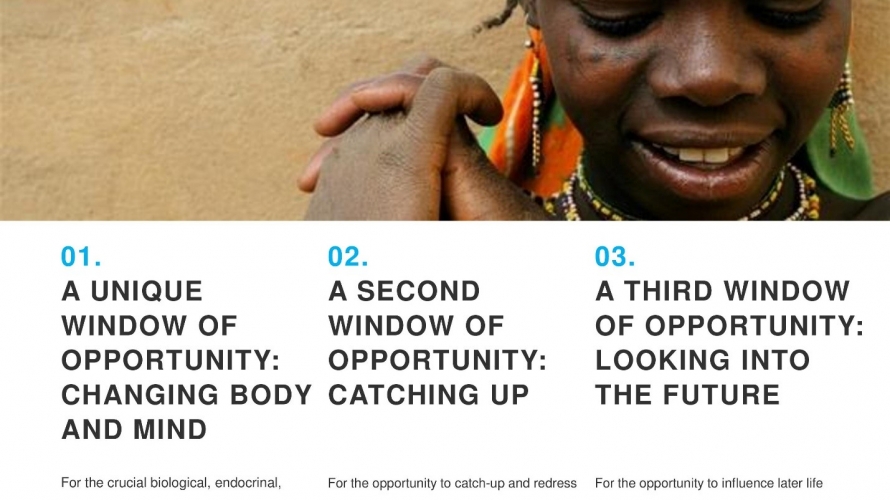 With the launch of Generation Unlimited,  UNICEF has assumed global leadership to advance the quality of life for children in the second decade. Yet many programs designed for young people, including by UNICEF, are not framed by well-developed theories of the developmental process.Recent scientific discoveries and studies demonstrate that adolescence is a critical or sensitive period, a time in life during which adverse events and exposures can have great impact. Scientific advances can provide actionable insights into windows of opportunity during which policies and programs can have a positive impact on lifetime trajectories.The three windows of opportunity in adolescence, inspired by our 2018 Oxford Handbook of Adolescent Development Research and its Impact on Global Policy,  is a framework, firmly rooted in the evidence, and drawing from the developmental and social science literature, that can help to steer how we design programs, conduct research and advocate on behalf of adolescents and young people. 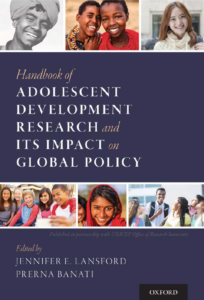 Download the Handbook of Adolescent Development Research and Its Impact on Global Policy
Adolescence is a UNIQUE window, with experiences and exposures that happen only during this period of life. Think about the start of menstruation, the final growth spurt, breast development, these are all examples of unique events occurring during this time of life. Undeniably the biological expressions of puberty are a turning point at the transition into adolescence.Neuroscientific advances now clearly show the plasticity of the adolescent brain, with unique developments of the prefrontal cortex during this period of life. During adolescence, the brain undergoes a process of synaptic elimination or pruning, during which frequently used connections are strengthened while others are eliminated. This process ensures that the remaining synaptic circuits are more efficient. Adolescence is therefore a unique moment to acquire new skills. For instance, research by Janacsek and colleagues (2012) on implicit sequence learning across the lifespan (between four and 85 years of age) suggests that sensitivity to acquiring new skills is significantly more effective until early adolescence (12 years old), than later in life. Yet too many skills-building programs begin after this age.This period is also unique in that we see gender differences emerge. While this might vary across cultures, many societies codify social norms for girls and boys during this period. These lead to an emergence of behaviours and practices which can instill gender inequalities, which may interact with other forms of disadvantage and accumulate. Evidence shows that many children assume care and domestic responsibilities from an early age, with an increasingly gendered pattern as children mature into adolescents. UNICEF estimates from MICS and DHS suggest that girls aged ten to 14 years old spend around nine hours per week on these activities, more than their male peers and more than double the 5-9 years old age group. Analysis of time use data from Malawi[1] shows that while in early adolescence, differences between girls and boys are small, 19-year-old girls undertake two hours of care work a day, while boys only half an hour. This gendered difference persists until females reach 60 years old, when physical limitations for sometimes demanding care work curtail it. 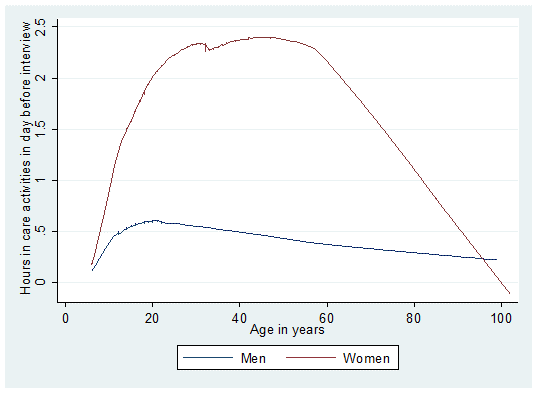 Gender-transformative interventions, and those addressing gender norms, can be particularly impactful in this window, when gender norms are being internalized and consolidated.

Adolescence as a unique window of opportunity

There is also what some are calling a SECOND or catch up window. This is a window that provides an opportunity to redress gaps in exposures and vulnerabilities experienced in early childhood. We know not all children born during the MDGs benefitted equally from MDG gains. Many of these children are now entering adolescence. A re-prioritized set of actions that advance progress for the most vulnerable can help redress the gaps, creating a ‘second window’ of opportunity to leave no child behind.Increasingly this evidence of a catch-up window is emerging – but more studies are needed to understand when to intervene, and which factors can be leveraged to ensure that full advantage can be taken of this potential second window of opportunity to improve child wellbeing.Evidence from a longitudinal study of childhood and poverty has recently shown that some stunting might be reversible, and catch up growth possible. In the study, around 50% of children stunted at year 1 were no longer stunted at year 8 in the absence of intervention, suggesting accelerated growth after the first 1000 days can occur. Unsurprisingly, catch-up growth depends on the degree of stunting experienced during infancy. This has significant implications for nutritional programming for adolescents. Height for age and height for weight indicators have long been recognized as being associated with outcomes across the board, and indicative of outcomes in a number of other wellbeing domains. For instance, stunting[2] is associated with long-lasting harmful consequences, including diminished mental ability and learning capacity, poor school performance in childhood.

Adolescence as a second window of opportunity

Finally, adolescence is also a window into OUR FUTURES. Here the impacts of intervening during this period can be seen to endure, as adolescents age into their adult lives and for future cohorts of their children. Health professionals are well aware of the life time benefits of positive health behaviours (for instance, physical activity and healthy diet) instilled during adolescence. This ability to create lifetime habits is also well known to cigarette manufacturers and the Food and Beverage industry (‘Big Food’).It is also a period during which vulnerabilities and stressors can strongly hit with severe consequences for adolescent futures. Portrait and colleagues (2011) analyzed data from the Amsterdam Longitudinal Aging Study to understand the effects of early life exposure to the Dutch famine (during the winter of 1944-45) on the prevalence of heart diseases, peripheral arterial diseases and diabetes mellitus at ages 60–76. The authors found that across four age classes (0-1 years old; 2-5 years old; 6-10 years old; and 11-14 years old), the exposure to severe undernutrition at ages 11–14 was the most significantly associated with a higher probability of developing diabetes mellitus and/or peripheral arterial diseases among women aged 60–76. Evidence from Falconi and colleagues, using cohort mortality data in France (1816-1919), England and Wales (1841-1919), and Sweden (1861-1919), also demonstrates that early adolescence is a sensitive developmental period for males; with findings suggesting that stressors experienced during the ages of 10-14 are related to shorter life spans.Importantly, the impact of stressors on an individual are cumulative, making it difficult to catch up once young people fall behind. Research in Vietnam has shown a considerably high share of children in the bottom quintile in mathematics scores at age 12 had left school by age 15, further limiting their life chances. Investments in education and learning for primary- and secondary-age children is crucial to ensure long-term well-being. to have positive effects at individual and household levels on their future annual earnings, decreased lifetime fertility rate and increased labour market participation, as well as on their children’s well-being and human capital.The window into our futures includes recognizing intergenerational impacts, which are evident for the next generation of children born to this cohort. For instance, interventions to improve the nutritional status of pregnant adolescents – for example through the provision of micronutrient supplementation and of nutritional education sessions – result in a statistically significant improvement in mean birth weight, reduced low birth weight rates, and preterm birth.

Adolescence as a third window of opportunity

Our approach to programming now needs new focus. With the new Generation Unlimited partnership, this conceptual approach can help researchers and practitioners, including UNICEF and policymakers, conceptualize adolescence in its interlinkages with other generations and life-course periods, to ensure synergies and effectiveness in the design and delivery of programs and policies.

The criticality of the first 1000 days remains, but to ensure the best for the future of society, science now obligates us to extend our reach to the first 1000 weeks of life. The conceptualization of adolescence through a three-window opportunity approach highlights life-course and gender perspectives on adolescence – and reminds us to consider this period of life for its unique, catch up, lifetime and intergenerational significance.  Prerna Banati, PhD, is chief of programs at UNICEF’s Office of Research — Innocenti. Her research focuses on the social and structural forces that are among the most fundamental determinants of poor well- being among children. She was a Takemi Fellow in the Department of Global Health and Population at Harvard University and has previously worked at the Global Fund to fight AIDS, TB, and Malaria and at the World Health Organization (WHO). Before WHO, she was based in South Africa, leading research on community HIV prevention, and has published in the fields of HIV prevention, reproductive health, health systems, and financing.Elena Camilletti supports the Office of Research – Innocenti’s work on adolescence and gender. She conducts research on adolescent girls and unpaid care and domestic work, gender norms, legal and policy frameworks for adolescent well-being, mental health and sexual reproductive health, and cost analyses in low- and middle-income countries. Before joining the Office of Research – Innocenti, she worked for the ILO, the Red Cross / Red Crescent Climate Centre, Oxford Policy Management Ltd and UNRISD. Elena holds a Master of Science in Emerging Economies and Inclusive Development from King’s College London and a Bachelor’s Degree in International Relations and Diplomatic Affairs from the University of Bologna. You can follow here on twitter @elenacml.

[1] Based on data collected for the impact evaluation of the Malawi Social Cash Transfer program. See more at https://transfer.cpc.unc.edu/?page_id=196

[2] Number of under-fives falling below minus 2 standard deviations (moderate and severe) and minus 3 standard deviations (severe) from the median height-for-age of the reference* population, out of the total number of children under 5 years old in the surveyed population. See more at https://data.unicef.org/topic/nutrition/malnutrition/