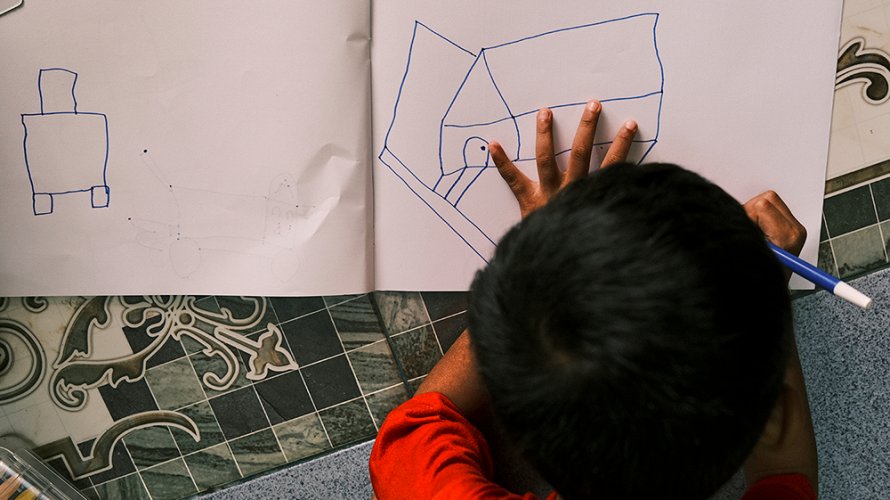 © UNICEF/UN0379158/BeaChildren draw with items from a recreational kit for children affected by COVID-19 in Jombang, Indonesia, on 22 October 2020. The youngest learners missed an average of 106 days of school in 2020, more than any other level of schooling.

A few weeks ago, after his last day at kindergarten, my son wanted to show me his portfolio. Marveling at the delightful collection of drawings, crafts, photos and teacher notes, I couldn’t believe how lucky we are that he got to experience a full year of kindergarten, in spite of COVID-19.

Since we moved to Florence, Italy, at the end of last summer for my work as a researcher with UNICEF Innocenti, we have been under some degree of restriction to contain the spread of COVID-19. Kindergartens have however, for the most part, stayed open. 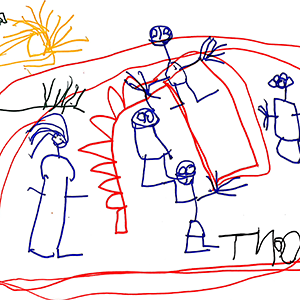 A drawing by Dita Nugroho's son.

My nephews, who are the same age, but live in one of many cities around the world where pre-primary* schools have remained closed over the past year and a half, have not been so lucky. They tried different online kindergarten programmes with mixed results and had little to no real-life interaction with children their age. This contrast reflects what was happening around the world. A survey of 143 countries found that while pre-primary students in high-income countries lost fewer instruction days in 2020 than older students, the opposite was true in low-and-middle income countries.

A new UNICEF Innocenti research brief, It’s Not Too Late to Act on Early Learning, which I wrote together with colleagues at UNICEF and Inter-American Development Bank, examines the cost impact of these closures, how countries are responding and what can be done to support this group of young children as they prepare to start primary school.

Here are some key findings from the brief:

#1: The cost of pre-primary school closures is significant…

Pre-primary school children in low-and-middle income countries (LMICs) lost an average of 106 instruction days in 2020, more than the days lost in primary and secondary schools.

Building on earlier work done by at the Inter-American Development Bank, the brief estimates the lost pre-primary school days in 2020 can cost at least $1.6 trillion globally in future earnings.

#2: … but pre-primary education is often left out of responses to COVID-19

And while many countries reported increased total spending for the education sector, this was less likely to be the case for the pre-primary sub-sector. It is important to note here the low starting point of spending at this level, with more than a third of countries investing less than 2 per cent of their education budgets on pre-primary education. Donor spending on the sub-sector is similarly low and prone to volatility.

#3: It’s not too late to support the children who missed out on pre-primary learning

A recent joint statement by UNICEF and UNESCO called for schools to be last to close and the first to reopen. The brief echoes this call, highlighting the high cost of inaction and limited degree of pre-primary students’ participation in learning continuity activities while schools are closed.Its first recommendation: Prioritize the reopening of pre-primary schools, so less children miss out on important early learning experiences.Reopening school doors alone, however, will not be enough. The children who missed out on pre-primary learning opportunities are not starting school on even footing compared to those before them. Addressing this gap in the early years of schooling will be easier and cheaper for education systems to do, before these children remain or fall further behind. The brief presents key lessons from programmes that have successfully prepared children who missed out on a full pre-primary program for school. Specifically, these were: 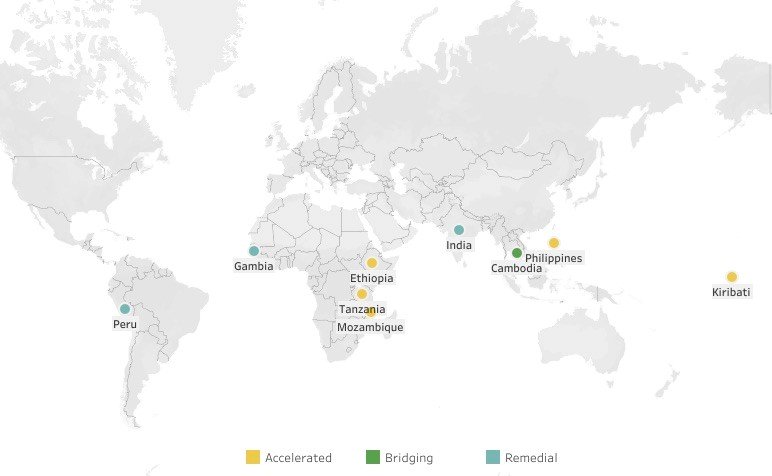 These were referred to as “transition programmes” in the brief, as they are often used while countries are preparing for or transitioning to universal pre-primary access. An accelerated curriculum can inform the development of full pre-primary curriculum and can also be harnessed to respond to future crises. Evaluations show that even short, low cost transition programmes can support children’s readiness for school. They can be led by trained teachers or volunteers, but ongoing supervision and support or coaching for educators is beneficial in either case and can be done by linking with existing systems. Engaging families and the local community can help reach the most vulnerable children and support programme sustainability. Many families around the world would share my family’s sentiment that we can’t forget about the young children, like my nephews, who missed out on pre-primary learning opportunities because of COVID-19. Luckily it is not too late nor impossible to help them catch-up.