Youth engagement as a pathway to peace

Adolescent boys walk past a barrier of razor wire and an army tank in Tunis, the capital. March 2011.

Despite broad agreement that youth engagement is important to forging sustainable peace and development, young people are often not given the opportunity to participate in public discourse and decision-making.[1] Absence of a youth voice makes it difficult to design policies and programmes that adequately respond to their needs, particularly in conflict-affected contexts.The 15th International Symposium on the Contributions of Psychology to Peace – hosted in 2017 by UNICEF Innocenti and Sapienza University of Rome – focused on pressing issues related to young people and conflict, including: violence, memories of war and terrorism, environmental change, multicultural societies, and youth resilience and empowerment. The last theme – young people’s resilience and empowerment – showed up in many of the presentations at the symposium. Similarly to achievement of the SDGs, symposium participants acknowledged that peace cannot be accomplished without the meaningful participation of young people, and without adult decision-makers “walking the talk” of truly engaging with them. 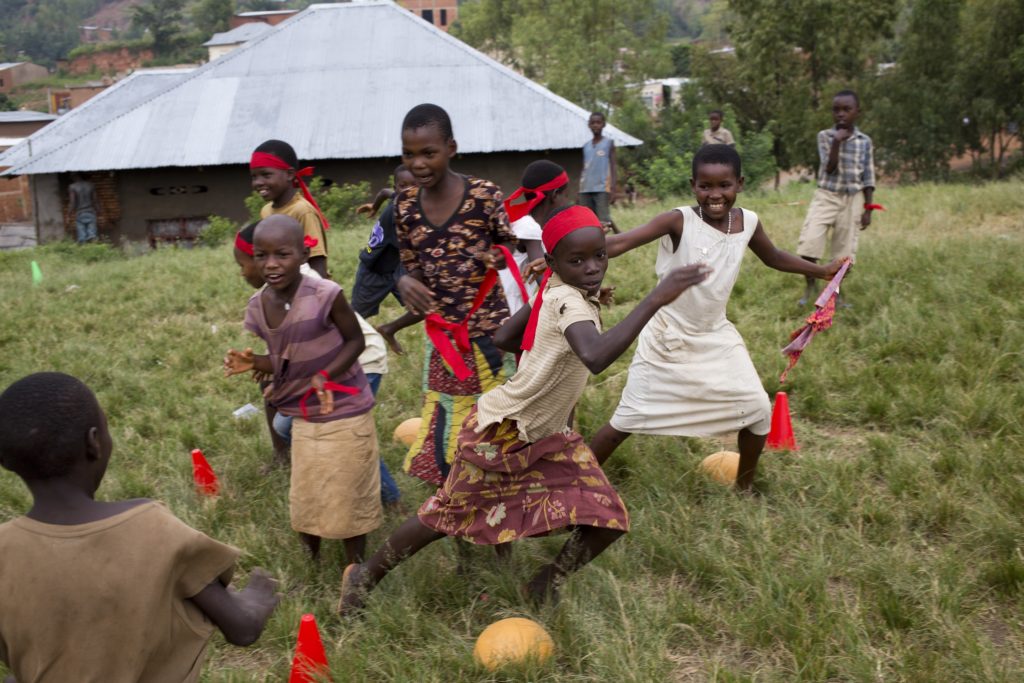 Children play at the Kamesa Child-Friendly Space in Bujumbura, Burundi. The Kamesa Child-Friendly Space provides a safe space where children can be with other children, play games that focus on peacebuilding and receive psychological support.
UNICEF defines adolescent and youth engagement as “the rights-based inclusion of adolescents and youth in areas that affect their lives and their communities, including dialogue, decisions, mechanisms, processes, events, campaigns, actions and programmes – across all stages, from identification, analysis and design to implementation, mentoring and evaluation”.[2]The symposium provided several arguments from psychology and related disciplines on why the engagement of young people is important to peace and social cohesion. Preventing young people from active engagement is not only a violation of their rights, but a potential driver of conflict,[3] with exclusion and lack of recognition shown to lead to frustration, disenchantment and acts of violence and conflict.[4] They also prevent the leaders of tomorrow and the “torchbearers” (as Ban Ki-Moon called them) of the SDGs from taking action against violence and injustice to set the path they wish to walk on in their future.However, adults often struggle with the meaningful engagement of children and young people in decision-making. Even in schools young people may be implicitly or explicitly discouraged from active participation.[5] As such, schools can act as both a contributor and preventer of conflict (for details see Affolter’s blog). In childhood and early adolescence, schools provide the main – and sometimes the only – platform for engagement with civic issues. Sharing research from Italy, Camilla Pagani spoke about the potential of schools to improve young people’s understanding of multi-cultural and other forms of diversity and to foster peacebuilding. As the place where students from different backgrounds are most likely to have their early, significant encounters with “otherness”, schools can contribute to peacebuilding by helping young people “unpack” their realities and question constructs and emotions around racism and other prejudices that they bring into the classroom.[6] Their realities need to be unpacked both in the formal curriculum and through more informal channels such as youth clubs, theatre, sport, etc.The ability of schools to act as effective peacebuilding platforms depends on whether they are equitably accessible to all. Analyses conducted as part of the Learning for Peace programme found that the likelihood of violent conflict doubles in countries with high levels of education inequality between ethnic and religious groups. In turn, conflict widens inequalities in education, particularly between richer and poorer groups and between boys and girls.

in comparison to their parents, the 16-35 age group is less likely to participate in non-conventional political activities – such as joining new social movements, participating in protests or humanitarian and human-rights organizations – and believes it has less chance to affect public policy through active participation

As they get older, the platforms through which young people can engage with decision-makers diversify. Despite increased options, Winnifred Louis from the University of Queensland presented evidence suggesting that young people in Western Europe and North America are more disengaged from formal decision-making processes than previous generations. Data from Wave 5 (2005–2009) and Wave 6 (2010–2014) of the World Values Survey suggest that in comparison to their parents, the 16-35 age group is less likely to participate in nonconventional political activities – such as joining new social movements, participating in protests or humanitarian and human-rights organizations – and believes it has less chance to affect public policy through active participation. Emerging analyses from Louis et al.’s work[7] cast light on why American and Australian young people may be engaging less with public issues.The research is showing that the level of engagement from state leaders and decision-makers with young people’s political action affect young people’s moral conviction about the importance of civic issues, their personal and perceived support for democracy, and also their support for or against law-breaking in the affected causes. These trends are suggesting that engaging young people in decision-making is not only the “right” thing to do from a human rights perspective, but a crucial approach to reducing violence and promoting peace.The Symposium made an effort to engage with young people as discussants, presenters, and volunteers. A highlight was the visit to Association Rondine – The Citadel of Peace. Dedicated to building future peace leaders, the association brings together students from conflict affected countries in the Balkans, Caucasus region, Middle East, and Africa. The students often come from opposing sides of a conflict and live and study together in the medieval village of Rondine, where they learn skills for constructive dialogue – with each other and with older leaders – toward a peaceful coexistence.When asked what we – the older adults in the room who study peace and conflict in various contexts – can do to help young people like the Rondine group, they responded that finding more opportunities for young people to “speak to the enemy” was crucial. They also wanted more youth involvement in peace processes at the political level.