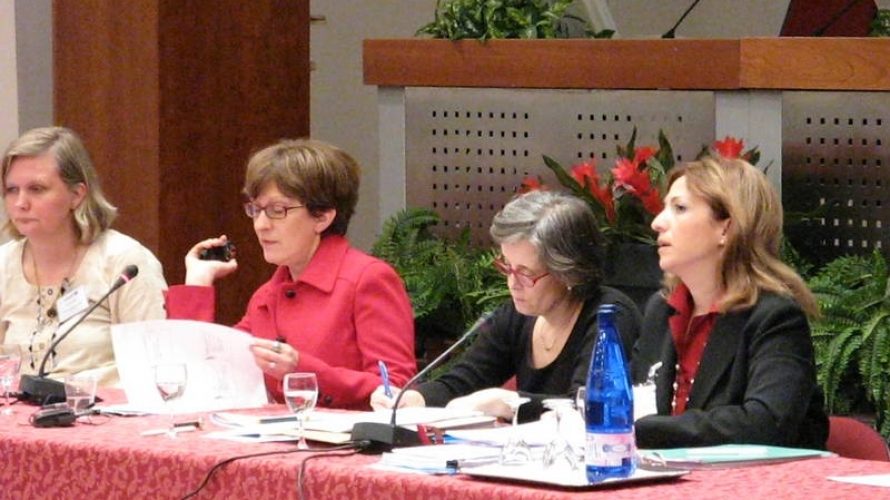 ©UNICEF IRC /2008
Left - Right: Lena Karlsson, UNICEF IRC; Nevena Vuckovic Sahovic, Committee on the Rights of the Child; Marta Santos Pais, UNICEF IRC; Athanassia Sykiotou, Democretus University of Thrace
The UNICEF Innocenti Research Centre is hosting a series of thematic expert consultations on child trafficking and child sex tourism, in preparation for the World Congress III against the Sexual Exploitation of Children and Adolescents to be held in Brazil in November 2008. The consultations are organized in close cooperation with UNICEF's Child Protection section in New York, and with the support of UNICEF TACRO and Brazil.
On the 21st of April key findings and recommendations from IRC research on child trafficking were presented, with an introduction to a broader approach to the theme and to the implementation and monitoring of international standards at regional and international levels.
On the 22nd of April the discussion will focus on preventing sexual exploitation of children in travel and tourism, with good practices and lessons learned on the role of private sector and community-based action for the implementation of international standards.
On April 23rd, a discussion will be held specifically on the preparation of the World Congress III.
Government officials, UNICEF staff members, National Committees, International NGOs and experts in this area participate in the meeting, which will be followed by a two-day meeting of the Organizational Committee of the World Congress on 24-25 April.

i>Disclaimer
The findings, interpretations and conclusions expressed in the papers presented below are entirely those of the author(s) and do not necessarily reflect the policies or the views of UNICEF.

UNICEF page on Child protection from violence, exploitation and abuse