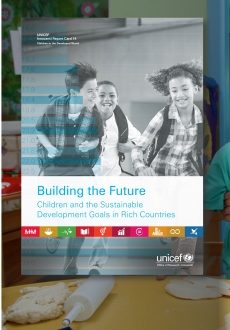 (New York/Florence, 15 June 2017) 1 in 5 children in high-income countries lives in relative income poverty and an average of 1 in 8 faces food insecurity, according to the latest Report Card issued by the UNICEF Office of Research - Innocenti.

Building the Future: Children and the Sustainable Development Goals in Rich Countries is the first report to assess the status of children in 41 high-income countries in relation to the Sustainable Development Goals (SDGs) identified as most important for child well-being. It ranks countries based on their performance and details the challenges and opportunities that advanced economies face in achieving global commitments to children.

“Report Card 14 is a wake-up-call that even in high-income countries progress does not benefit all children,” said Sarah Cook, Director of UNICEF Innocenti. “Higher incomes do not automatically lead to improved outcomes for all children, and may indeed deepen inequalities. Governments in all countries need to take action to ensure the gaps are reduced and progress is made to reach the SDGs for children.”

Key results on selected SDG indicators for children and adolescents in rich countries include:

In ranking 41 countries, the league table reads well for those countries that frequently appear at the top of recent comparisons of human and child development – the Nordic countries, Germany and Switzerland – and less well for lower-income countries in the group, such as Romania, Bulgaria and Chile. However, a closer look reveals room for improvement across the board as all countries rank in the mid- or bottom-third on two or more goals.

For some indicators – income inequality, adolescent self-reported mental health and obesity – the trends suggest cause for concern in a majority of rich countries. In 2 out of 3 countries studied, the poorest households with children are now further behind the average than they were in 2008. The rate of obesity among 11–15 year olds and the rate of adolescents reporting two or more mental health problems a week is increasing in the majority of countries.

Although many countries have seen broad progress in a number of indicators, there are still wide gaps between them in other areas. National income levels fail to explain all of these differences: for example, Slovenia is far ahead of much wealthier countries on many indicators, while the United States ranks 37 out of 41 in the summary league table.

Based on the results presented in Report Card 14, UNICEF calls for high-income countries to take action in five key areas:

DOWNLOAD:
ENGLISH
Building the Future - All tables and charts

DOWNLOAD:
ENGLISH
Adolescents’ Mental Health: Out of the shadows. Evidence on psychological well-being of 11-15-year-olds from 31 industrialized countries

DOWNLOAD:
ENGLISH
Is University Education More Important for a Boy than for a Girl? Social approval of unequal educational opportunity across 21 countries

DOWNLOAD:
ENGLISH
Quality of Childcare and Pre-Primary Education: How do we measure it?

DOWNLOAD:
ENGLISH
Children’s Participation in Housework: Is there a case of gender stereotyping? Evidence from the International Survey of Childrens’ Well-Being

DOWNLOAD:
ENGLISH
Prevalence and Correlates of Food Insecurity among Children across the Globe

DOWNLOAD:
ENGLISH
Not Refugee Children. Not Migrant Children, But Children First: Lack of a systematic and integrated approach