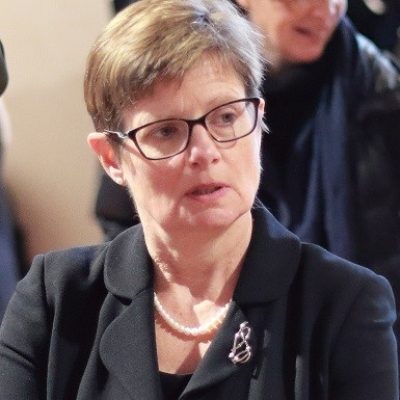 Sarah Cook is the Director of UNICEF’s Office of Research-Innocenti in Florence, Italy. An economist and China specialist, her research has focused primarily on China's social and economic transformations, including work on labour and migration, poverty, inequality, social policy and gender. From 2009-2015 she was the Director, United Nations Research Institute for Social Development (UNRISD) in Geneva, where she led the Institute in developing its 2016-2020 strategy on ‘Transformations to Equity and Sustainability’. Her engagement in China has spanned the period from the mid-1980s, including 5 years as the Ford Foundation’s Programme Officer in Beijing (2000-2005) where she led the Foundation’s initiatives on economics, governance and gender. From 1996-2009 she was a Fellow at the Institute of Development Studies, Sussex. Sarah received her PhD from the Kennedy School of Government, Harvard University, an M.Sc. from the London School of Economics and her BA from Oxford University. 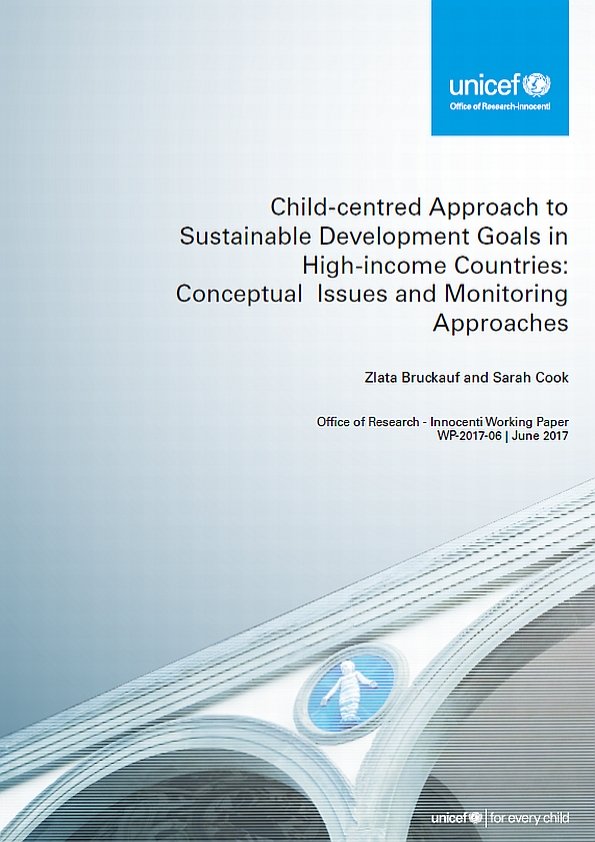 The 2030 Agenda for Sustainable Development was agreed upon globally through a long political process. By ratifying its Declaration, high-income countries became accountable participants in the development process while retaining their obligations as donors. Although few of the 17 Sustainable Development Goals (SDGs) are explicitly child-focused, children are mentioned in many of the 167 targets. Drawing on a well recognized socio-ecological model (SEM) of child development and a life course perspective, this paper proposes an analytical framework to help navigate through the SDG targets based on their relevance to child well-being. The application of this framework in thinking through policy options illustrates the interdependence of SDGs and their targets within a sector (vertically) and across the 17 Goals (horizontally). A five-step process for choosing measurable SDG indicators links the proposed analytical framework with the challenges of SDG monitoring. The paper contributes to debates on the implications of the SDGs for children by facilitating their adaptation to the national context through a ‘child lens’. The proposed analytical approach helps to articulate a context-specific theory of change with a focus on human development outcomes, so that public investments inspired by the SDGs bring tangible results for children.
Read the publication 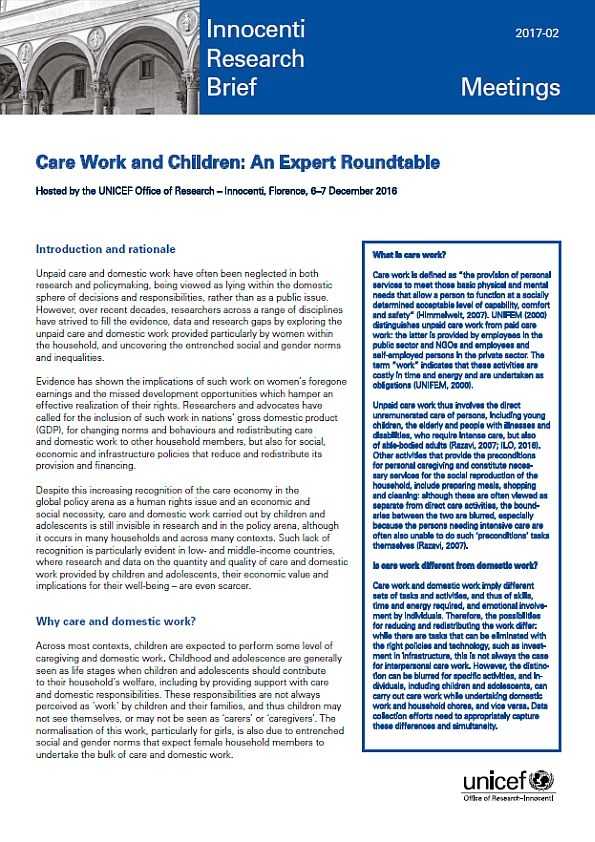 A first roundtable to explore the issues regarding care work and children was hosted in Florence by the UNICEF Office of Research – Innocenti from 6 to 7 December 2016. Unpaid care and domestic work have often been neglected in both research and policymaking, being viewed as lying within the domestic sphere of decisions and responsibilities, rather than as a public issue. However, over recent decades, researchers across a range of disciplines have strived to fill the evidence, data and research gaps by exploring the unpaid care and domestic work provided particularly by women within the household, and uncovering the entrenched social and gender norms and inequalities.
Read the publication 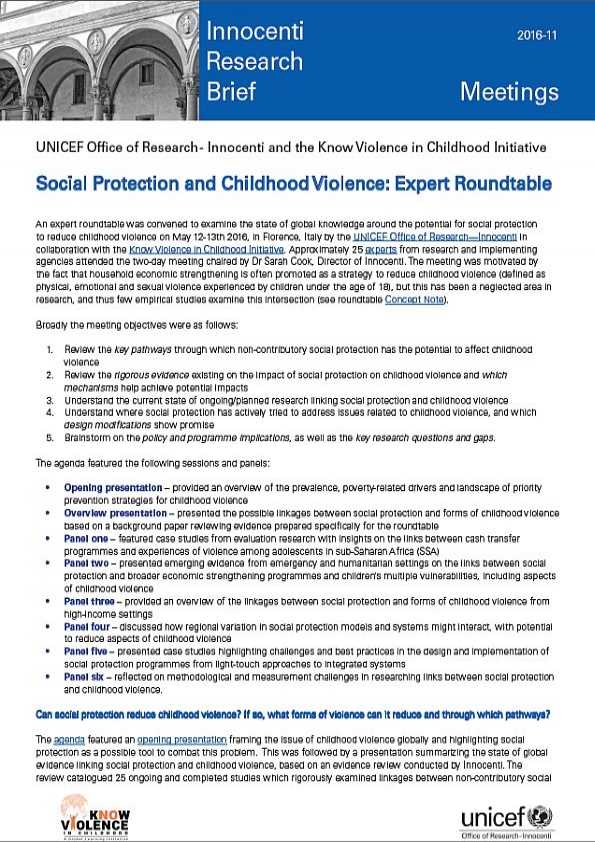 This Brief summarizes the proceedings of the Know Violence Roundtable examining the evidence on the role of social protection in reducing childhood violence hosted by UNICEF Office of Research – Innocenti, 12-13 May, 2016.
Read the publication 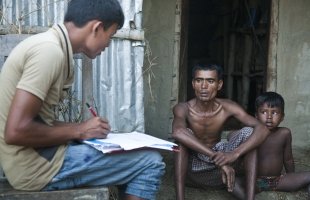 The social realities of making evidence matter in development

Children’s Roles in Social Reproduction: reexamining the discourse on care through a child lens

Understanding the linkages between social safety nets and childhood violence: a review of the evidence from low- and middle-income countries