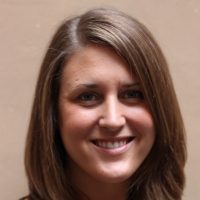 Michelle Mills is responsible for the dissemination and uptake of research produced by the Transfer Project, a multi-country research initiative that studies the impact of large-scale government cash transfers in sub-Saharan Africa. Before joining Innocenti, she was an international consultant with FAO and ILO working on capacity development projects to improve policies and programmes on social protection, child labour and decent work. Michelle earned a master’s degree at Stanford University where she focused on child poverty and social protection measures in Africa. 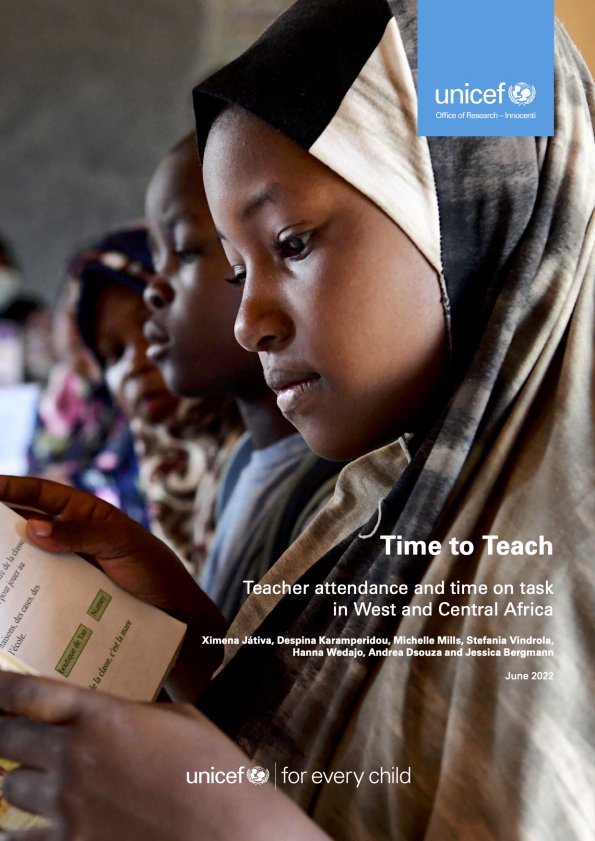 Time to Teach: Teacher attendance and time on task in West and Central Africa

Teachers are the most important drivers of students’ academic achievement and they are at the heart of learning recovery efforts. Finding out the bottlenecks and necessary conditions for ensuring teachers’ presence at school and in the classroom is essential. Time to Teach is a mixed methods research initiative that aims to find out the contextual, working conditions and policy factors impeding primary school teacher attendance in 11 West and Central African countries: Côte d’Ivoire, Gabon, Ghana, Guinea, Guinea Bissau, Liberia, Mauritania, Niger, Nigeria, The Gambia, and Togo.
Read the publication 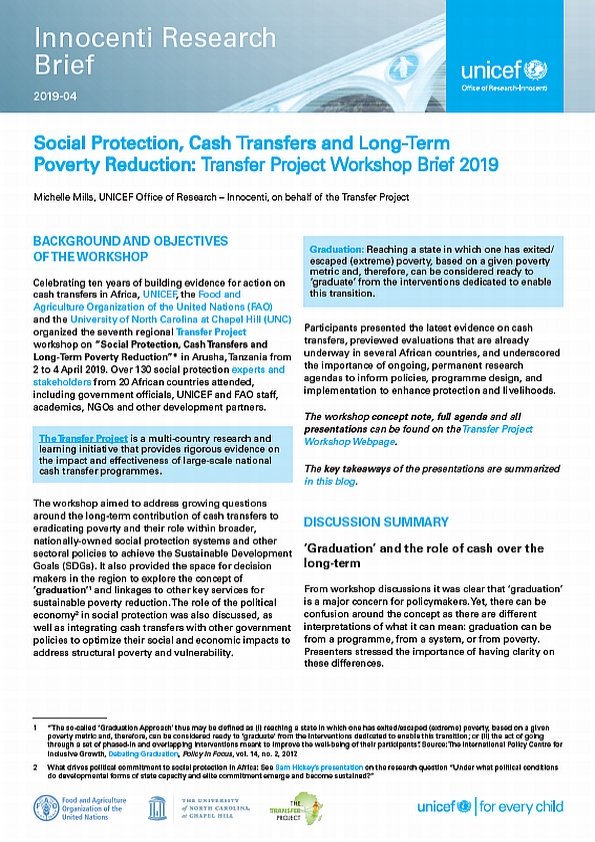 Celebrating ten years of building evidence for action on cash transfers in Africa, UNICEF, the Food and Agriculture Organization of the United Nations (FAO) and the University of North Carolina at Chapel Hill (UNC) organized the seventh regional Transfer Project workshop on “Social Protection, Cash Transfers and Long-Term Poverty Reduction” in Arusha, Tanzania from 2 to 4 April 2019. Over 130 social protection experts and stakeholders from 20 African countries attended, including government officials, UNICEF and FAO staff, academics, NGOs and other development partners.
Read the publication 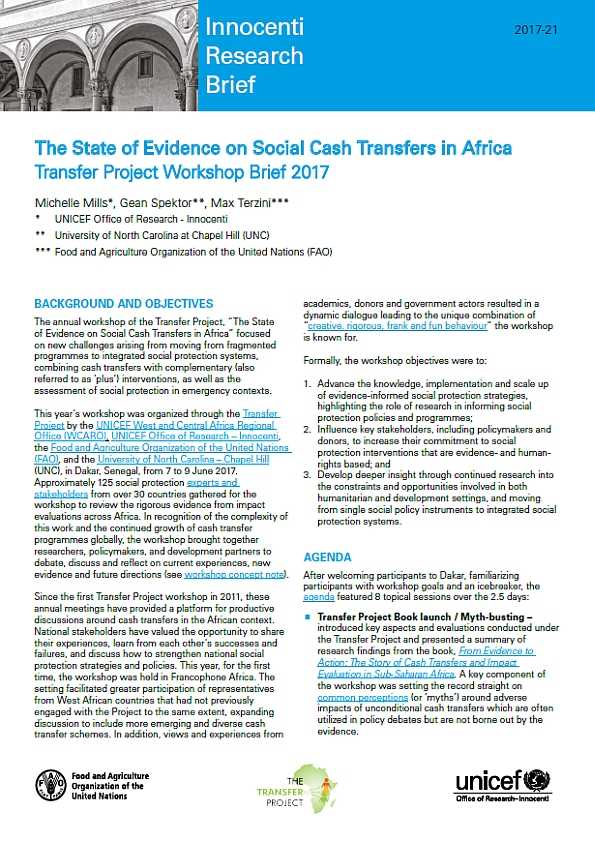 The annual workshop of the Transfer Project, “The State of Evidence on Social Cash Transfers in Africa” focused on new challenges arising from moving from fragmented programmes to integrated social protection systems, combining cash transfers with complementary (also referred to as ‘plus’) interventions, as well as the assessment of social protection in emergency contexts.
Read the publication 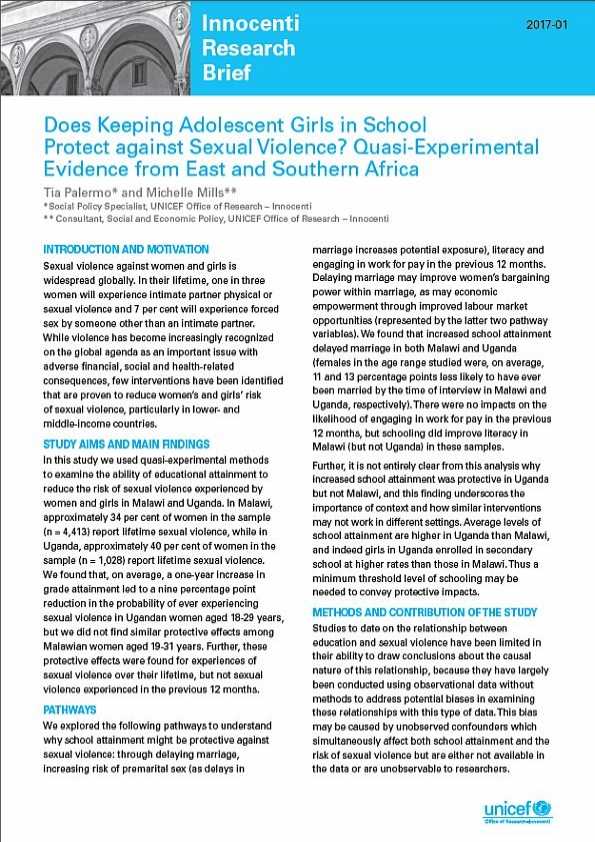 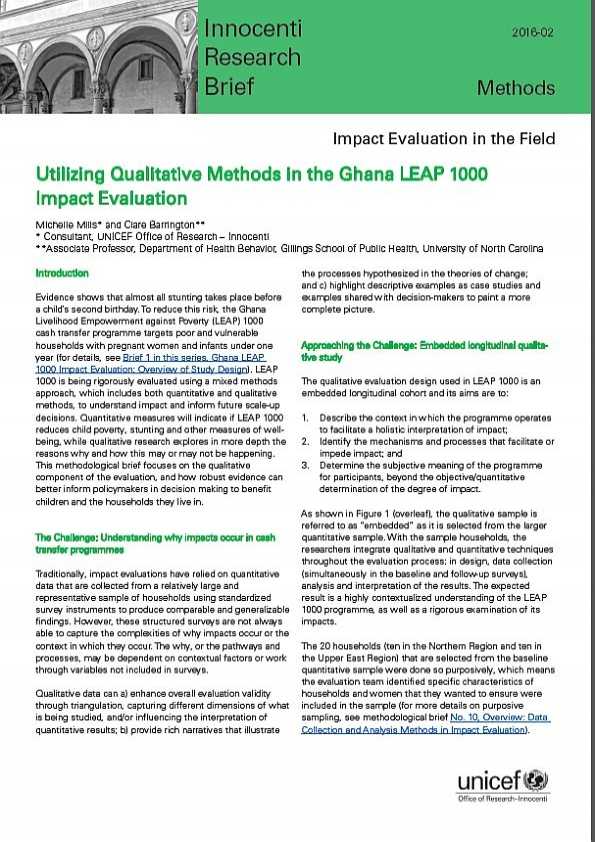 This methodological brief focuses on the qualitative component of the evaluation of the Ghana Livelihood Empowerment against Poverty (LEAP) 1000. Quantitative measures will indicate if LEAP 1000 reduces child poverty, stunting and other measures of well-being, while qualitative research explores in more depth the reasons why and how this may or may not be happening.
Read the publication 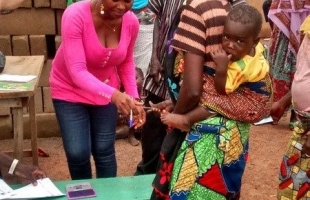 It’s Payday! What a cash transfer looks like in Ghana

Cash transfer programs have become an increasingly popular component of social protection strategies across sub-Saharan Africa. These programs provide monthly payments to poor and vulnerable households and can lead to multiple demonstrated benefits, such as the improvement of health and education among young people, and impacting the local economy. Recently, the Government of Ghana expanded the Livelihood Empowerment Against Poverty (LEAP) Program, which assists extremely poor households (defined by those that live on less than $1.10 USD per day) that contain orphans and vulnerable children, the elderly and those with disabilities. The expansion, known as LEAP 1000, now includes extremely poor households with pregnant women and infants and focuses on children in the first 1000 days of life. Through the cash transfer payment, LEAP 1000 is expected to improve children’s nutritional status and reduce stunting, both common problems in Ghana. Social cash transfers have been implemented widely across Africa. To gain a better understanding of how the program in Ghana is implemented, I observed several payments over the first week of LEAP 1000 in rural villages in Northern Ghana. Through a translator, I also had the chance to speak with many of the program beneficiaries before and after their actual payment. Each of the cash payment stations had a slightly different atmosphere and took place in locations familiar to the recipients: a classroom, under a tree, or a pavilion used for village gatherings. The process for payment was quick and efficient: the women were called five at a time; they provided identification, made their thumbprints and then were given a payment for a two-month period. A team that included the District Welfare Officer, a postmaster and a LEAP 1000 focal point all took part in handing out and verifying payments. A police officer was also present at all times to ensure the security of the transactions and stood off to the side at the pay points. LEAP 1000 beneficiary provides thumbprint at payment Payments were a somewhat public affair; all the women arrived with their babies and often older children while a few men stood at a distance. What struck me instantly was that every payment was conducted in a very quiet, orderly fashion, even with all the babies in tow! Because of this, the women and potentially some other community members could hear the amount of the payments going to each household. My western mentality automatically questioned the privacy and safety of the process, but no one seemed to mind. I was also told by the payment team that there were no reported cases of theft during or after payments of the existing LEAP Program. As the women received their payments, some lingered to talk with others, but many left straightaway. The police officer was there “just in case”, and after watching a few payments, I could not imagine that he would be needed. The women I observed did not have to walk very far to the payment point. For those who were sick or injured, a designated family or community member could receive their payment on their behalf. In one particular case, the village chief collected money for a woman who could not come. While this may raise some suspicion, I recognized that the openness and transparency that initially gave me concern about the process also creates a level of peer pressure for everyone to be quite truthful. Neighbours would not allow for dishonesty, and in all likelihood, any attempts to defraud the system would quickly be revealed to the team. The operational procedure did not come without its challenges. While the actual delivery of the payment is fast, some women I spoke with waited for several hours before the team arrived, taking them away from their children and their daily tasks. To avoid time costs and inconvenience to women, program managers are working to improve scheduling for future payments. Another obstacle was that many of the women did not know the exact amount they were going to receive ahead of the payday, so some of them did not have specific plans on how they would use or budget the transfer. However, an explanation just ahead of the payment was given, so it was clear what each household was receiving and why. Overall, the women said that the improvement of the well-being of their children was their ultimate goal. Even without knowing the cash transfer amounts, they said they wanted to start businesses to increase their income, or buy, rear and sell livestock, and purchase household staples at the local market, which would in turn benefit their families. Currently, a mixed-method, long-tem  impact evaluation is being conducted by the Transfer Project. The evaluation, which will be carried out over the next 2 years, will give us more insight into whether and how the program is improving children’s nutritional status and household. In the meantime, a sense of opportunity and hope could clearly be observed among the LEAP 1000 recipients in Northern Ghana.   Michelle Mills is at the UNICEF Office of Research in Florence.
Read the blog 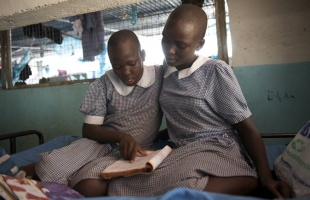 Mounting evidence from systematic reviews, such as these on early childbearing and HIV risk, suggest that cash transfers have positive impacts on youth transitions into adulthood. Yet, data illustrating how these programs affect outcomes is generally scarce. Now new research from the UNICEF Office of Research-Innocenti and the University of North Carolina at Chapel Hill, published in Social Science & Medicine, recently presents evidence of these impacts, suggesting that unconditional cash transfer programs targeting orphans and vulnerable children may significantly reduce the likelihood of early pregnancy. Most cash transfer programs in Africa are unconditional, leaving the decision on how to spend the cash with the beneficiaries. These decisions, in turn, can play a key role in determining the magnitude of impacts on the household. National statistics report that approximately 32% of Kenyan women aged 25 to 49 were married by age 18 and 14.5% of 15 to 19-year-old girls had given birth to at least one child. Researchers studied whether the Government of Kenya’s main anti-poverty program: Cash Transfer for Orphans and Vulnerable Children, had potential beneficial effects on adolescent girls, in particular if there was an impact on early pregnancy and marriage. While the primary objective of the Kenya cash transfer program is poverty alleviation, it appears to make an important contribution to the successful transition of young women into adulthood. At the time of the study, in 2011, the Kenya cash transfer program benefitted nearly 280,000 orphans and vulnerable children in 135,000 households – it has more than doubled in coverage since that time. By design, the program provides a monthly stipend of approximately $21 intended to represent 20% of monthly total household expenditures. While the cash transfers were unconditional, beneficiaries were provided a message during enrollment that they were expected to use the money for the care and development of the orphans and vulnerable children that lived in the household. As a way to encourage self-sustainability and, ultimately, independence from the program, once the children turn 18, they are no longer eligible to receive benefits. The research found that the program reduces the probability of early pregnancy for young women aged 12 to 24, who had never given birth, by 5 percentage points (34% decrease). The researchers attributed this effect partially to increased enrollment and attainment of young women in school, increased financial security as well as a delay in sexual debut. Notably, the largest impact was among the group of most disadvantaged girls (those not enrolled in school). Essentially, the cash transfer program kept vulnerable girls and young women in school longer and delayed their engagement in sexual activity, thereby reducing their chances for early pregnancy. Although the study found no impacts on early marriage, the authors believe that the study was not designed to identify impacts, since adolescent girls who migrated out of households due to marriage, as is custom in Kenya, were not tracked. Therefore, while the findings on early pregnancy are significant, the researchers suggest that follow-up studies are necessary to more adequately gauge the dynamics of how cash transfers can impact outcomes, including: focusing in on the link between marriage (including those already married), fertility and adolescence for girls who move out of study households; learning more about the behavior of boys vis-à-vis their female counterparts; and understanding complementary strategies that can improve reproductive health and life trajectories for young women which can be bundled with cash transfers. What directions are suggested by this study? Given that Kenya’s cash transfer for orphans and vulnerable children program is similar in design to other cash transfer programs in Eastern and Southern Africa, there is considerable scope to magnify these effects with proper targeting and messaging from policymakers, program designers and other relevant stakeholders. Michelle Mills is based at the UNICEF Office of Research – Innocenti For further research on the impact of cash transfers on youth transitions, see: The Government of Kenya’s Cash Transfer Program Reduces the Risk of Sexual Debut among Young People Age 15-25 and Child-focused state cash transfers and adolescent risk of HIV infection in South Africa: a propensity-score-matched case-control study. Click here to learn more about Transfer Project research and evaluations. Stay tuned for further results from ongoing government-run unconditional cash transfer evaluations and impacts on adolescents in Malawi, Tanzania, Zambia and Zimbabwe.
Read the blog