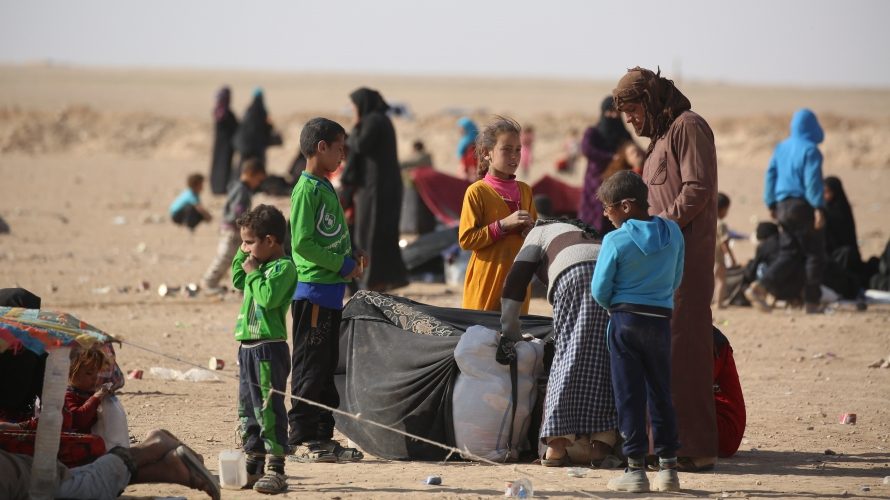 
Following hostilities in the northern Iraqi city of Mosul, newly arrived refugees on the way to the Al-Hol camp, close to the Iraqi border in Syria’s north -eastern Hasakeh Governorate.

Social protection has increasingly been considered as an effective policy-level intervention for reducing vulnerability and extreme poverty, and for contributing to the development and structural transformation of a society. In their capacity of providing responsive long-term systems, Social Protection programmes can help to reduce poverty, inequality and deprivation, as well as stimulate human development, social peace and resilience.The increased complex and protracted crises that have forced nearly 60 million people, half of them children, to leave their homes due to conflict and violence; the human and economic cost of disasters highlighted the need for considering long-term policy responses able to reach vulnerable populations in a more consistent way. An International Conference on Social Protection in Contexts of Fragility and Forced Displacement took place in Brussels in September 2017 with the aim to shed new light on the prospects of using social protection systems in these contexts; to highlight the opportunity for humanitarian responses either to build on existing social protection systems or to help create them, with a view to work towards a humanitarian-development continuum.Innocenti communication team interviewed six experts attending the Conference to talk about existing challenges, experience and potential social protection programmes in contexts of fragility, forced displacement, and prolonged crisis, as well as to identify future directions for research. Watch the videos and listen to Tilman Bruck, Sheree Bennett, Andrew Kardan, Paolo Verme, Ugo Gentilini and Fabio Veras Soares. 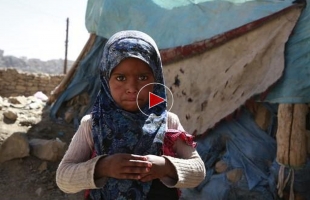 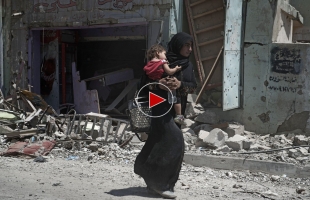 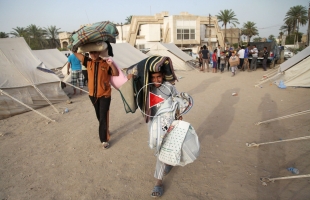 In 2015, over 65 million people were estimated to have been forcibly displaced worldwide as a result of conflicts, persecution and human rights violations. Meeting the social protection needs of these vulnerable populations is one the biggest challenges facing the humanitarian and development sector.
Read the article 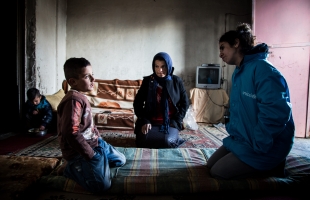 Imagine you work for UNICEF in Lebanon. Your team has the challenging task of ensuring that half a million displaced Syrian children who fled the war in their home country attend primary school. These children live scattered throughout the country, as Lebanon has a “no-camps” policy. Many of them are traumatized and grow up in bitter poverty. You have collaborated with the Lebanese Ministry of Education to open a free afternoon shift in public primary schools, specifically for Syrian children. You have also helped to set up an accelerated learning program that enables Syrian children who have been out of school for many years to enter school at an age appropriate grade. Yet, despite these considerable achievements, approximately half of the Syrian children you are trying to support do not attend school.This was the situation facing the UNICEF Lebanon team at the end of 2015. Survey data suggested that poverty was a key remaining barrier to school attendance of Syrian children. Although afternoon shift schools do not charge fees, many households could not afford the residual costs of school participation including transport to school. Moreover, many households relied on child labor to supplement household income, limiting children’s time available for school. As a direct solution, UNICEF Lebanon considered compensating households for the cost of education and lost income by means of a monthly cash payment when children enroll in an afternoon shift school. In collaboration with the Ministry of Education and the World Food Programme, UNICEF Lebanon set up a pilot program – referred to as the No Lost Generation Program or locally as Min Ila - to test this approach in the 2016/2017 schoolyear. So-called cash transfer programs, such as the one considered by UNICEF Lebanon, are used on a large scale in other settings and with considerable success. They tend to increase children’s school participation (see here, here, and here) and lower children’s participation in work (see here) among a host of other beneficial impacts. However, it is not clear that these programs would have comparable effects in contexts of displacement and humanitarian emergency (see here for a discussion of the limited available rigorous evidence in these settings). In the case of Lebanon, would Syrian households really use the financial support to pay for children’s school attendance, or do they have other priorities? Would they, for instance, use the money to pay off debt or purchase food and shelter? Is money really a promising tool to support the school attendance of potentially traumatized children? Could there be other barriers to school participation not previously considered? The UNICEF Lebanon team decided to seek a thorough answer to these questions, both to decide whether to scale up the pilot program and to inform broader debates around the right approach to ensuring school participation in settings of displacement. It is hard to overstate the significance of this decision. Generating credible evidence in a setting such as the one described in this blog is not as easy as it may sound and requires a significant investment both in terms of staff time and financial resources. Given the extensive demands to deliver services to a population in need, evidence generation (beyond direct monitoring and evaluation of program delivery) understandably ranks low on the list of priorities in settings of displacement. However, it is critical to learn from experiences in the field if we are to support displaced populations effectively and allocate resources efficiently in future refugee crises.The study findings (soon to be available in the UNICEF Innocenti catalogue) highlight both the potential and the limitations of cash transfers as a tool in settings of massive displacement. Among children enrolled in afternoon shift schools, the study shows an increase in household expenditure on education and transport to school in particular. Because afternoon shift schools close at nightfall during at least part of the school year, safe transport is considered a critical element of regular school attendance. Accordingly, the study finds a positive impact on school attendance of children enrolled in afternoon shift schools. Weekly days of school attendance increased by about 20 percent (or 0.6 days) due to the program. This increase is comparable for younger children and older children and comparable for boys and girls. There is no evidence that the pilot program increased afternoon shift school enrollment in study areas. This could be due to a combination of factors. Most importantly, primary school enrollment rates (including but not limited to afternoon shift school enrollment rates) of Syrian children increased rapidly across the country during the period of the study. An intensive “back to school” advocacy campaign is presumed to have played an important role in this increase in primary school enrollment. The increase in primary school enrollment appears to have led to capacity constraints, limiting the opportunity for out of school children to enroll in an afternoon shift school even if they had wanted to.The UNICEF Lebanon team has used these findings to advocate for expanded capacity to absorb Syrian children in Lebanese schools. A new wave of follow-up data was recently collected. The aim is to measure broader impacts of the cash support on outcomes such as children’s mental health, their self-esteem, outlook on life and aspirations. Stay tuned and follow UNICEF Innocenti for the latest results when they come out.
Read the article

Tilmann Brück, Founder of the International Security and Research Center