UNICEF Innocenti Research Centre (IRC) has a long history of conducting and supporting research on adoption and alternatives to institutionalisation. The approach to these has been informed by the UN Convention on the Rights of the Child (CRC) and the 1993 Hague Convention on inter-country adoption. See, for example, the Innocenti Digest on Inter-country Adoption (1998) and the Innocenti Insight 'Children in Institutions: the Beginning of the End?' (2003).

As part of efforts ongoing for the protection of children deprived of their families, UNICEF IRC has engaged in research focusing on the child’s best interests principle in adoption, specifically in inter-country adoption. The best interests of the child represents a great challenge in terms of determination and implementation in adoption practice. The research will result in a study that aims to provide a global overview of how the principle is applied in the legislative and policy framework as well as in the different steps of the inter-country adoption procedure. The CRC and the 1993 Hague Convention on inter-country adoption constitute the framework of the study, which includes a literature review of research on adoption and good practices from different countries. The study is expected to make a significant contribution to discussions around inter-country adoption by summarising in one document how the best interests principle should be ensured across all steps of adoption procedures. The target audience includes policy makers, practitioners, researchers and child protection officers.

Development of the study has also been informed by the outcomes of a consultation, held at IRC in March 2009 with key experts from international and national arenas. The aim of the meeting was to bridge theory and practice on the best interests of the child as an individual with rights in the adoption procedure. Issues considered over the discussions included: the "personal" adoptability of the child; matching the child and new parents; the child in the preparation and eligibility of prospective adoptive parents; the child and adoptive parents meeting: preparation and mediation of the meeting; and post adoption support. These issues have subsequently been advanced in the study.

The study is generously supported by the Swiss National Committee for UNICEF. 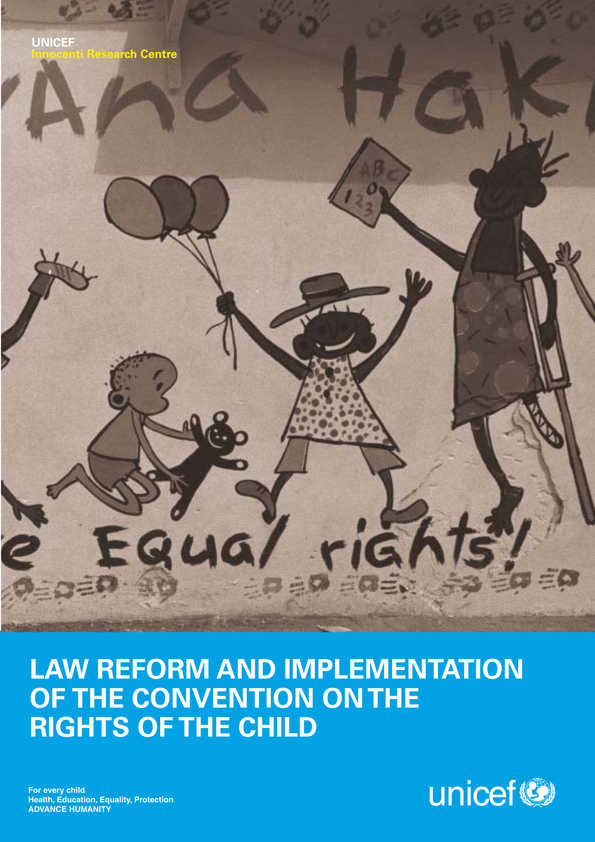 The study reviews the legislation concerning the rights of children adopted by 52 States parties since the adoption of the Convention on the Rights of the Child. With the goal of providing an overview of the scope and content of new legislation adopted since 1989, the report covers 18 of the general principles and rights contained in the Convention. Three subjects that deserve further investigation are identified: the process of law reform, its place as part of a broad child rights strategy, and the actual impact of legislation of this kind on children.
Read the publication 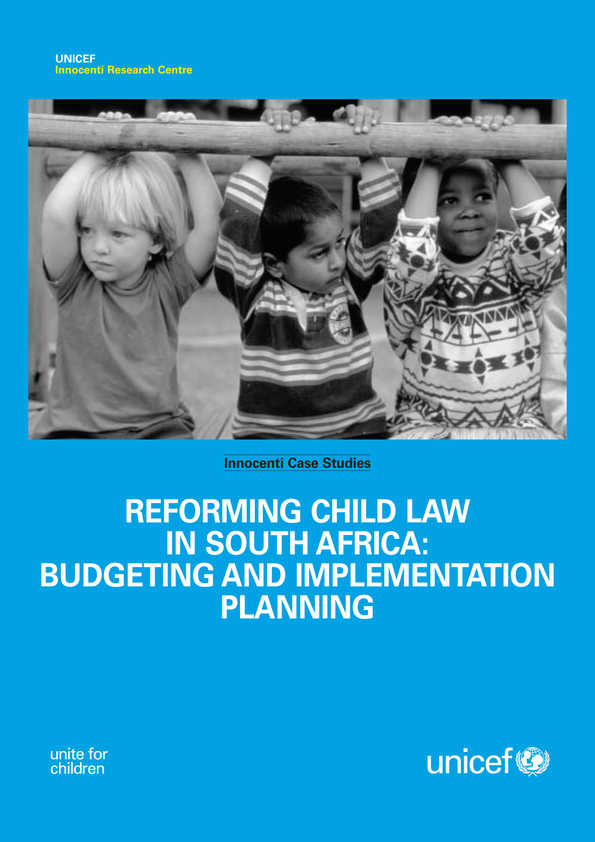 This publication documents a rare attempt to assess all the steps involved in legal reform for the realization of child rights and makes a detailed estimate of the costs at each step. The case study addresses two costing projects in connection with these reforms: one for development of a child justice system, another for a comprehensive children’s act. Both of these were extensive pieces of legislation requiring substantial systemic adjustment.
Read the publication 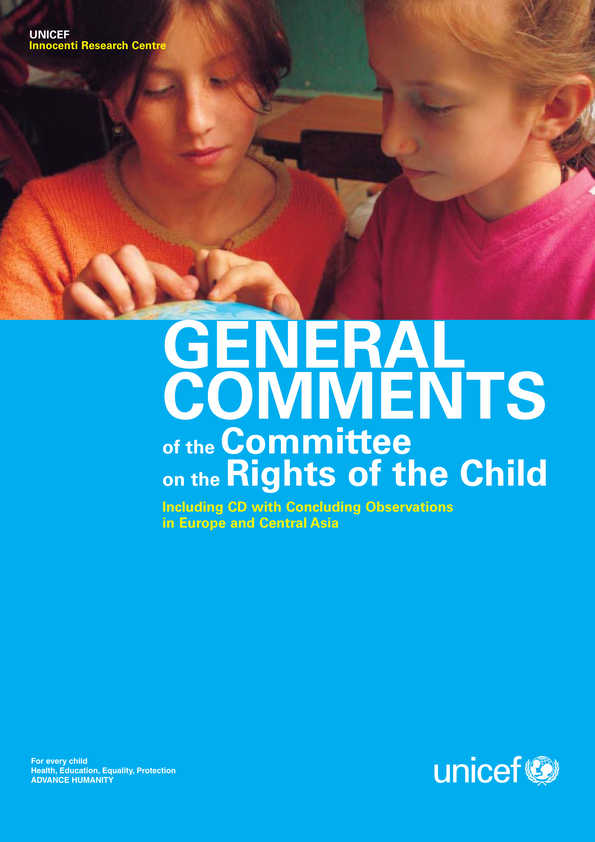 General Comments of the Committee on the Rights of the Child, including CD with Concluding Observations in Europe and Central Asia

Since its adoption in November 1989, the Convention on the Rights of the Child (CRC) has been ratified by states across regions and today it is in force in all but two. The CRC is the first binding international human rights instrument incorporating in the same text social, cultural, economic, civil and political rights. The present publication contains the seven General Comments issued by the Committee on the Rights of the Child, and the CD Rom accompanying this text includes all the Concluding Observations adopted by the Committee in relation to State Parties reports presented by European Countries and the Asian Republics between 1993 and 2005.
Read the publication 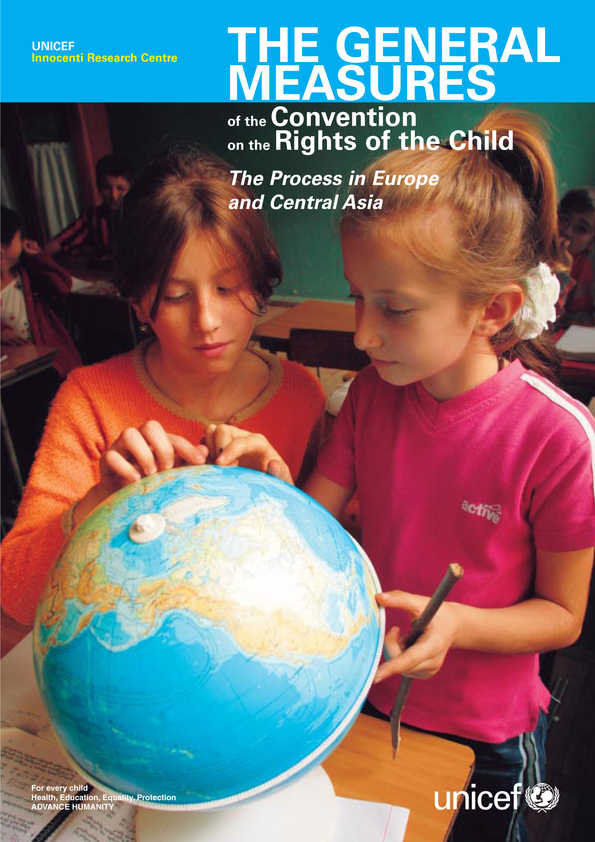 The General Measures of the Convention on the Rights of the Child: The Process in Europe and Central Asia 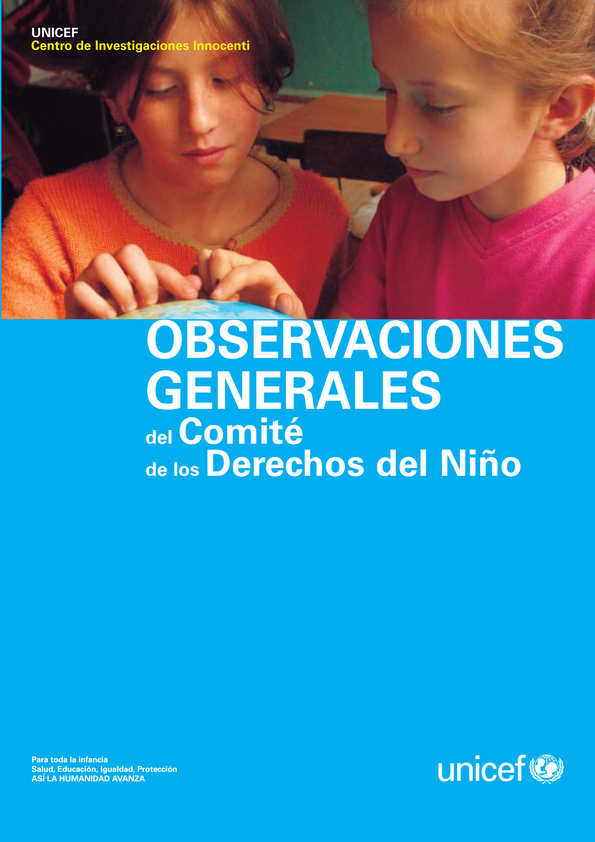 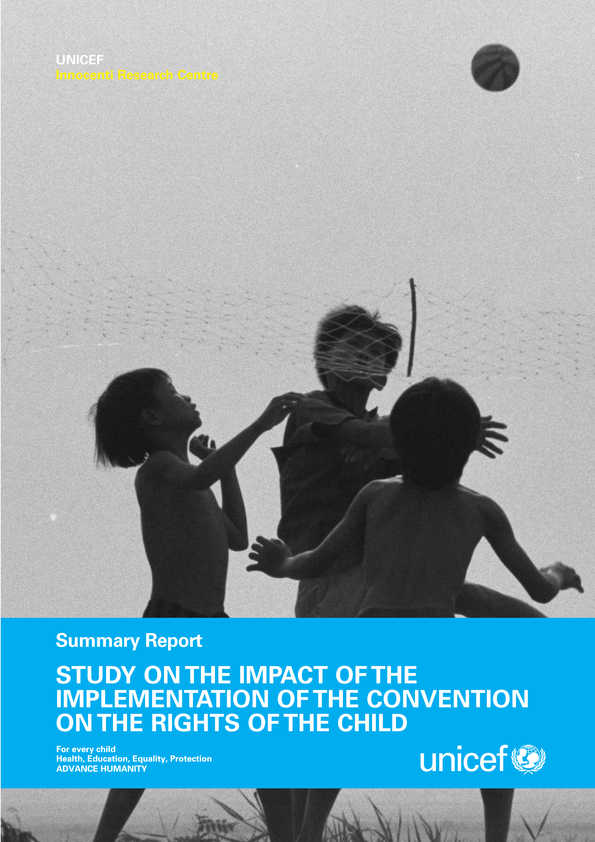 The CRC Implementation Report addresses areas where the potential of the treaty can be maximized, to advance the cause of children's rights and support UNICEF's agenda. The study focuses on the general measures of implementation of the CRC in 62 countries, with a particular emphasis on legal and institutional reforms at the national level aimed at ensuring the effective application and enforcement of the provisions of the CRC.
Read the publication 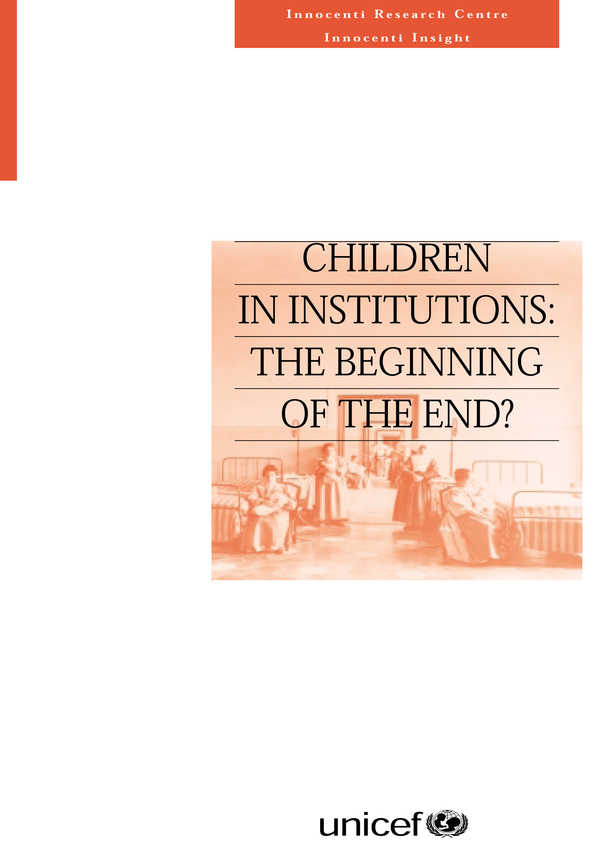 Children in Institutions: The beginning of the end?

There is a growing global consensus on the need to promote family-based alternatives to institutional care for children. No residential institution, no matter how well meaning, can replace the family environment so essential to every child. This Innocenti Insight examines efforts to prevent the institutionalization of children in Argentina, Chile, Uruguay, Italy and Spain, focusing on both public and private initiatives, as well as local and national policies.
Read the publication

Implementing the Convention on the Rights of the Child: Resource mobilization in low-income countries

This title focuses on the implementation of the UN Convention on the Rights of the Child as it relates to children's basic economic and social rights in developing countries in terms of the obligations placed by the Convention on both States and the international community.
Read the publication 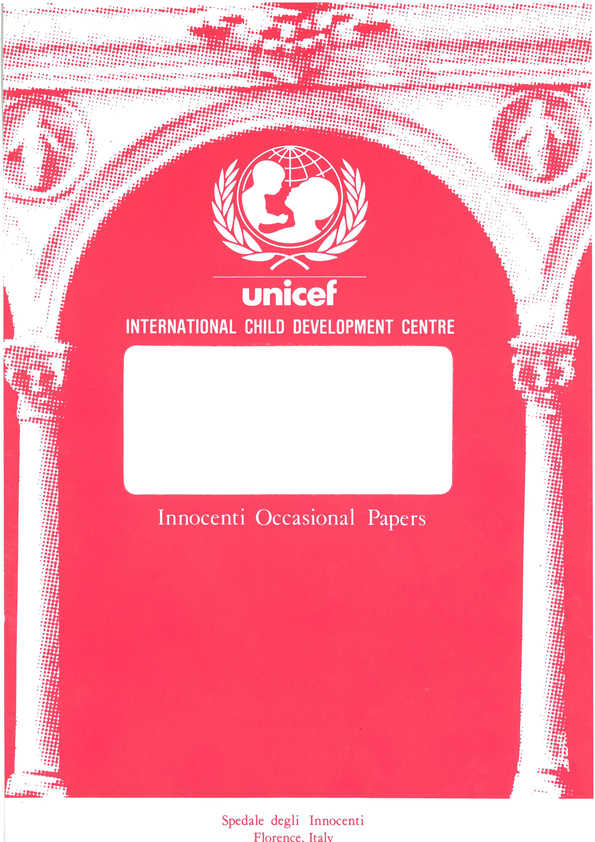 Implementing the United Nations Convention on the Rights of the Child: Resource mobilization and the obligations of the States Parties 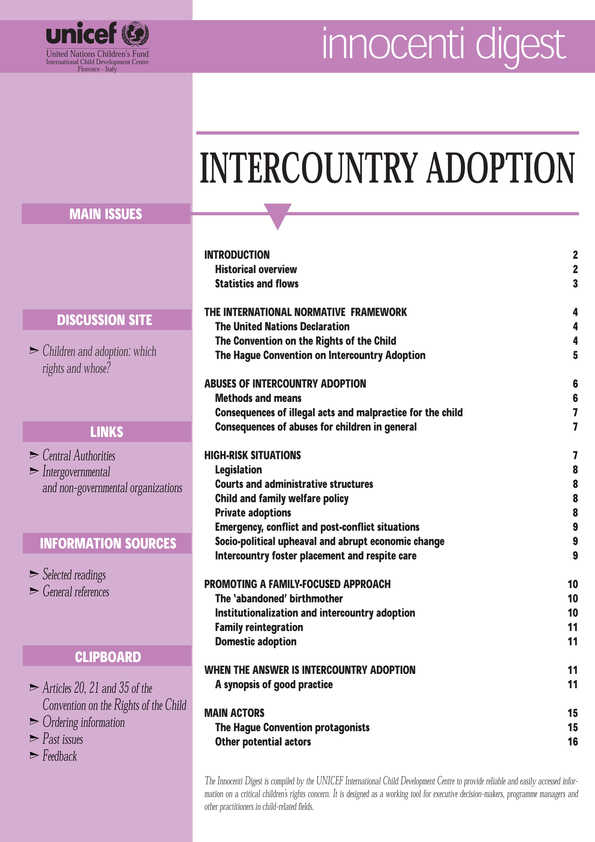 Broadly accepted international instruments specify the conditions under which intercountry adoption should be undertaken if the rights and best interests of the children concerned are to be protected and fully respected. The Digest identifies abuses of intercountry adoption as well as the measures required to combat such violations and to uphold 'best practice' in this sphere.
Read the publication 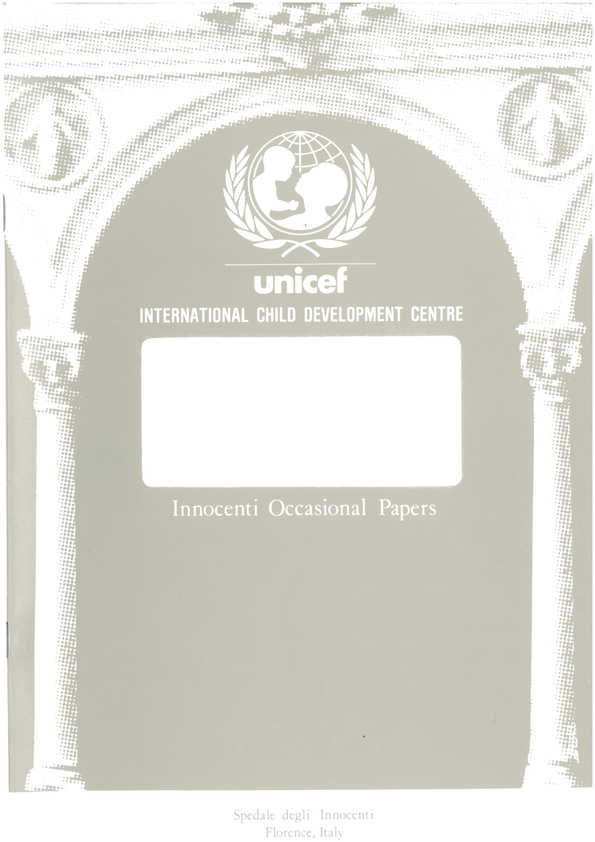 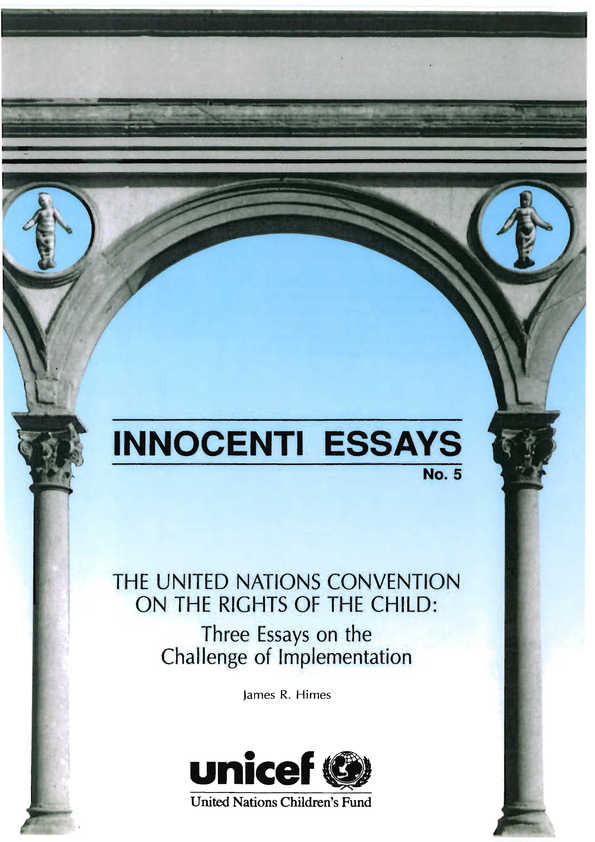 The United Nations Convention on the Rights of the Child: Three essays on the challenge of implementation

The Convention on the Rights of the Child has been variously hailed as ‘the cornerstone of a new moral ethos’ and a ‘milestone in the history of mankind’. But laws and treaties are as nothing without adequate practical follow-up.
Read the publication 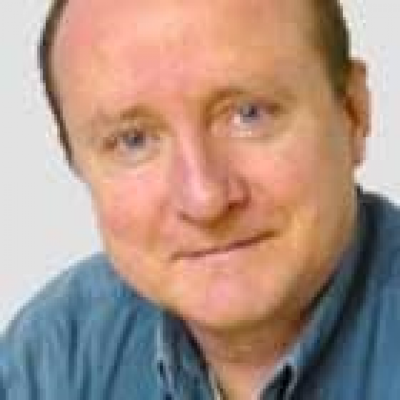