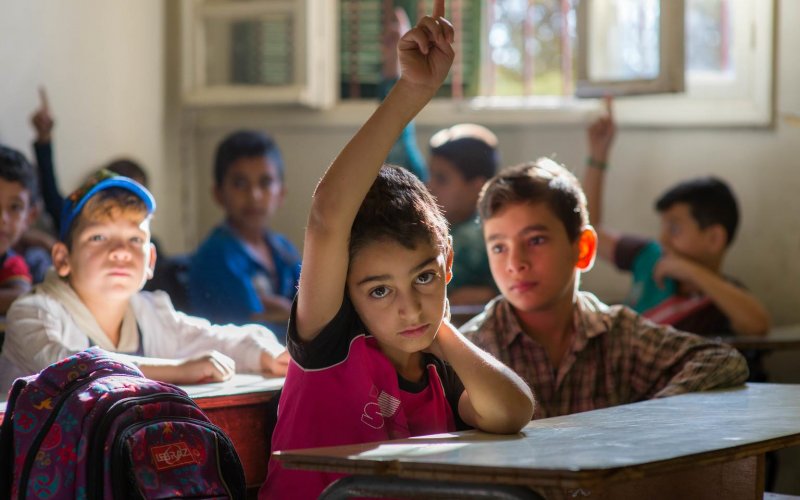 Humanitarian challenges of protracted fragility and conflict-related crises, and the more recent unprecedented migration and refugee movement around the globe underscore the need to break down the barriers between humanitarian and development work. Acute and extended crises such as in Syria have contributed to migration flows, which also highlight the need for long-term solutions in countries of destination.

In response to the Syrian crises, which led a large number of Syrian refugees to Lebanon, UNICEF, in partnership with the United Nations World Food Programme and in coordination with the Ministry of Education and Higher Education in Lebanona, initiated a child-focused cash transfer program for displaced Syrian children in Lebanon in the 2016-2017 school year. The program, known as the “No Lost Generation” or “Min Ila” (“from/to” in Arabic), was designed to reduce financial and other obstacles to children’s school attendance, including reliance on child labor, to minimize the impact of negative coping strategies on children. 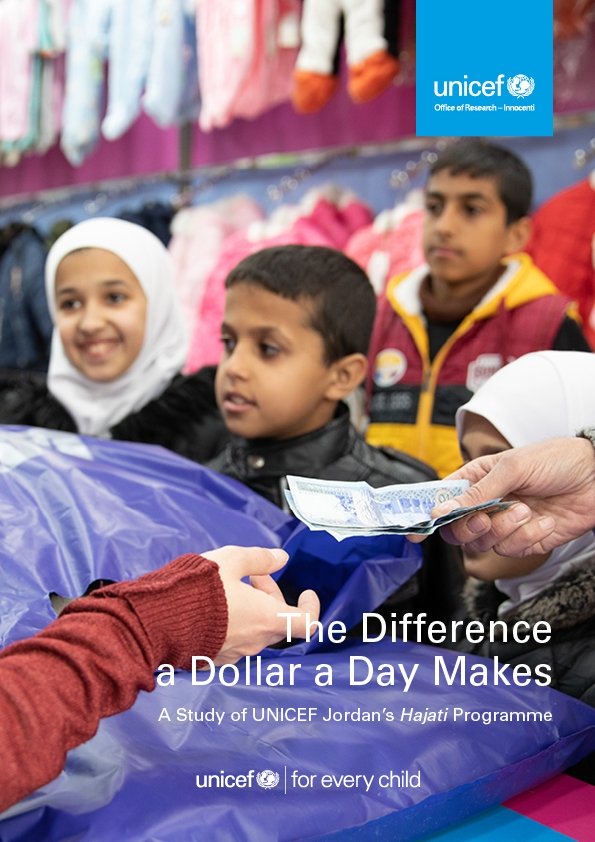 The Difference a Dollar a Day Makes: A Study of UNICEF Jordan’s Hajati Programme

What difference does a dollar a day make? For the poorest households in Jordan, many of whom escaped conflict in the Syrian Arab Republic, UNICEF Jordan’s Hajati humanitarian cash transfer programme helps them keep their children in school, fed and clothed – all for less than one dollar per day. In fact, cash transfers have the potential to touch on myriad of child and household well-being outcomes beyond food security and schooling.
Read the publication 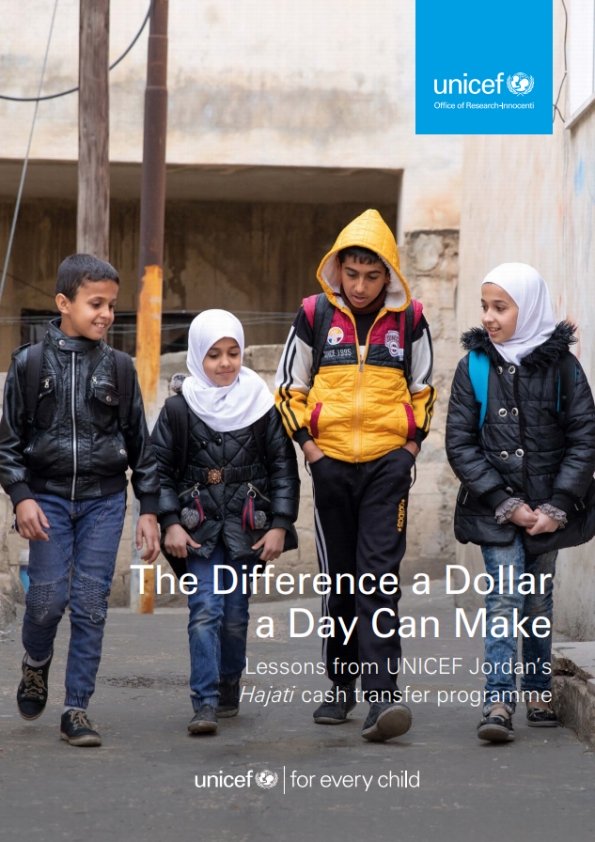 The Difference a Dollar a Day Can Make: Lessons from UNICEF Jordan's Hajati cash transfer programme

What difference does a dollar a day make? For the poorest households in Jordan, many of whom escaped conflict in the Syrian Arab Republic, UNICEF Jordan’s Hajati humanitarian cash transfer programme helps them keep their children in school, fed and clothed – all for less than one dollar per day. In fact, cash transfers have the potential to touch on myriad of child and household well-being outcomes beyond food security and schooling.
Read the publication 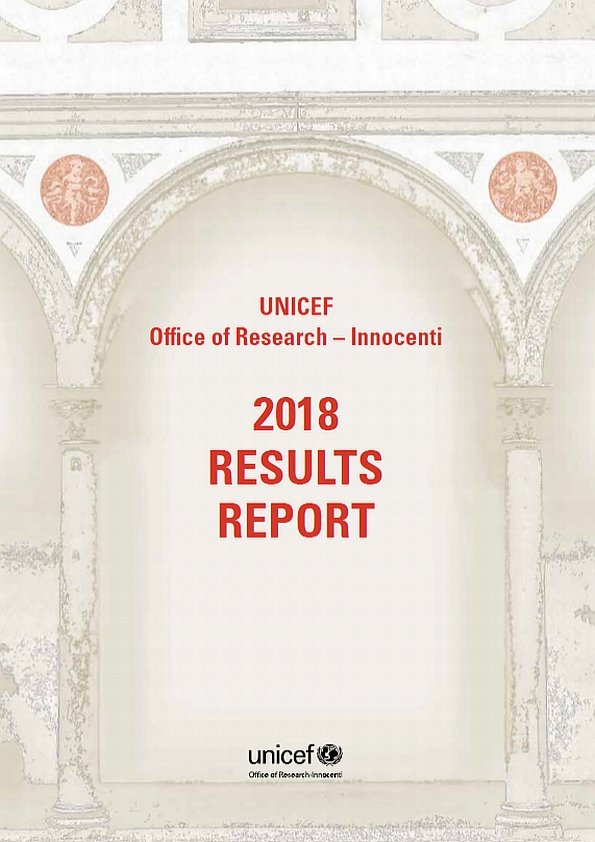 In 2018, significant gains were made in generating evidence to improve the lives of the most disadvantaged children, build organizational capacity to conduct and use quality, ethical research on children, and set a foundation as an important convening centre for expert consultation on next-generation ideas on children. 2018 marks the first year the UNICEF Office of Research - Innocenti is reporting on the progress of research under the new UNICEF Strategic Plan (2018-2021). This plan is the first to clearly delineate the role of research and evidence as one of the eight priority change strategies for children. This report therefore is an account of the first year of work to generate critical evidence to inform programmes, policies and advocacy for children and young people around the world
Read the publication 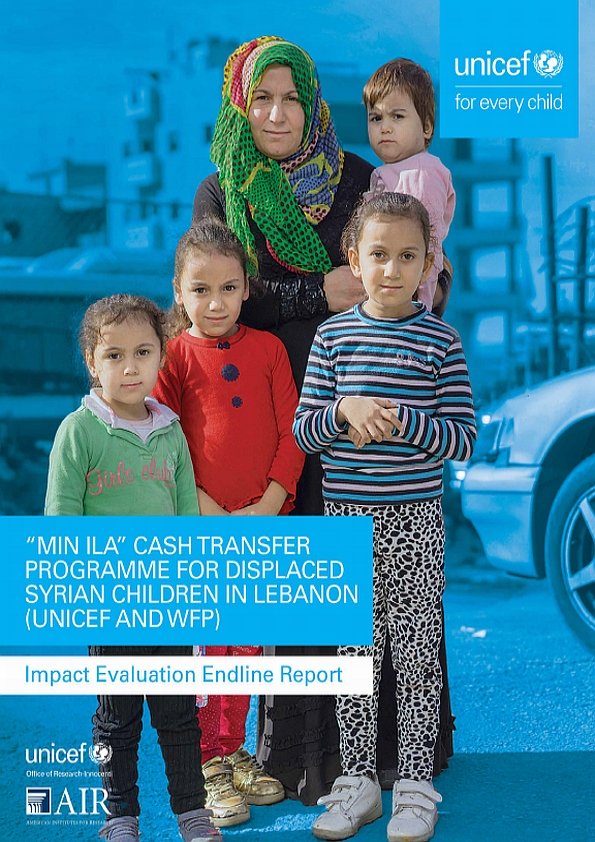 In the 2016–17 school year, the United Nations Children’s Fund (UNICEF), in partnership with the United Nations World Food Programme (WFP) and in coordination with the Ministry of Education and Higher Education (MEHE) in Lebanon, started to pilot a child-focused cash transfer programme for displaced Syrian children in Lebanon. The programme, known as the No Lost Generation (NLG) or “Min Ila” (meaning “from/to”) was designed to reduce negative coping strategies harmful to children and reduce barriers to children’s school attendance, including financial barriers and reliance on child labour. UNICEF Lebanon contracted the American Institute for Research (AIR) to help UNICEF Office of Research (OoR) design and implement an impact evaluation of the programme. The purpose of the impact evaluation, one of the first rigorous studies of a social protection programme supporting children in a complex displacement setting, is to monitor the programme’s effects on recipients and provide evidence to UNICEF, WFP, and MEHE for decisions regarding the programme’s future. This report investigates and discusses the programme’s impacts on child well-being outcomes, including food security, health, child work, child subjective well-being, enrollment, and attendance, after 1 year of programme implementation.
Read the publication 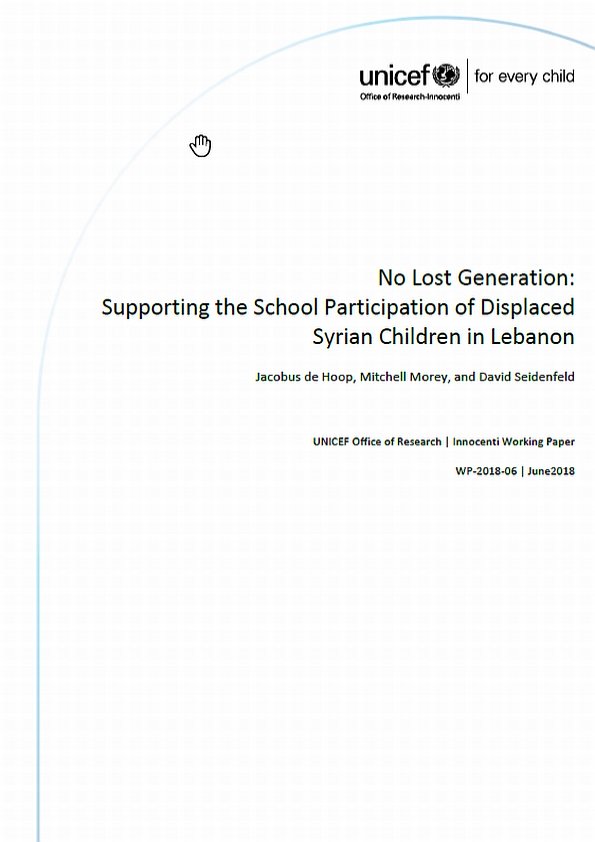 No Lost Generation: Supporting the School Participation of Displaced Syrian Children in Lebanon

This paper documents the impact of a cash transfer programme – an initiative of the Government of Lebanon, the United Nations Children’s Fund (UNICEF) and the World Food Programme (WFP), widely known as the No Lost Generation Programme (NLG) and, locally, as Min Ila (‘from to’) – on the school participation of displaced Syrian children in Lebanon. The programme provides cash to children who are enrolled in the afternoon shift of a public primary school. It was designed to cover the cost of commuting to school and to compensate households for income forgone if children attend school instead of working, two critical barriers to child school participation. We rely on a geographical regression discontinuity design comparing children living in two pilot governorates with children in two neighbouring governorates to identify the impact of the programme halfway in the first year of operation (the 2016/17 school year). We find limited programme effects on school enrolment, but substantive impacts on school attendance among enrolled children, which increased by 0.5 days to 0.7 days per week, an improvement of about 20 per cent over the control group. School enrolment among Syrian children rose rapidly across all of Lebanon’s governorates during the period of the evaluation, resulting in supply side capacity constraints that appear to have dampened positive impacts on enrolment.
Read the publication 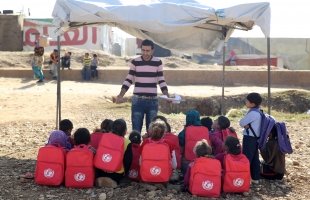 Children at a UNICEF-supported tented school for Syrian refugees in the Bekaa Valley in Lebanon.(Florence, 6 December 2019) As conflict-related crises and the movement of people across the globe continue, there is a growing need to support vulnerable populations who have been uprooted or are on the move. Social protection can help to address this need, through supporting basic needs, addressing poverty, and providing opportunities to improve health and education of children. A newly published special issue of the Journal of Development Studies aims to inform and support the design of social protection programmes in these humanitarian contexts. CLICK HERE TO VIEW THE JDS SPECIAL ISSUE“Ongoing and new crises left an estimated 164.2 million people in need of international humanitarian assistance in 2016,” said UNICEF Innocenti’s Manager of Humanitarian Policy Research, Jacobus de Hoop. “The combination of commitments under the Sustainable Development Goals [Goal 1.3] and the 2016 World Humanitarian Summit [increase social protection programmes and strengthen national and local systems and coping mechanisms in order to build resilience in fragile contexts] means now is the time to focus efforts on building resilient and effective social protection systems in fragile contexts.”“Now is the time to focus efforts on building resilient and effective social protection systems in fragile contexts.”Despite the increased use of social protection in fragile settings, there is still a need for thorough research regarding what works and why. Significant challenges arise in conducting research in fragile contexts. The studies in this special edition are helping to close the evidence gaps by exploring:Intended and unintended education and child labor impacts of food assistance in Mali; The nutrition impacts of food and asset transfers in Niger; Productive impacts of in-kind and cash transfers in Yemen;Ways to effectively identify social protection recipients in Niger;The costs of reforming Iraq’s public distribution system;The impact of cash transfers on the school participation of displaced Syrian children in Lebanon;If social protection affects social cohesion among Colombian refugees and poor segments of the Ecuadorian host community.A map showing the seven studies included in the Special Issue Journal of Development Studies on social protection in fragile settings. “We hope that these studies will help support policy design and encourage further research on social protection in challenging humanitarian settings,” de Hoop said. Despite these emerging insights, the authors of the special issue call for more research on social protection in humanitarian settings, the efficiency of which can, ultimately, save lives.The publication, focusing on social protection in contexts of fragility and forced displacement, follows a call for papers by UNICEF Office of Research—Innocenti and a workshop on the topic in June 2018. Revised versions of seven working papers released at the workshop are included in the special issue, which was led and edited by UNICEF Innocenti, in collaboration with colleagues at the International Security and Development Centre and the World Bank. Discover UNICEF Innocenti’s work on Social Protection in Humanitarian Settings plus explore our Research Watch on Social Protection in Emergency Situations,
Read the article 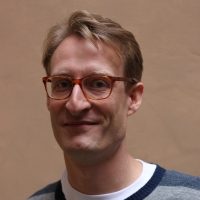 Social Protection in Contexts of Fragility and Forced Displacement: Introduction to a Special Issue

No Lost Generation: Supporting the School Participation of Displaced Syrian Children in Lebanon

Economic Transfers and Social Cohesion in a Refugee-Hosting Setting