The Innocenti Report Cards and Social Monitors have focused on child income poverty and linked these to characteristics of families and deprivations/inequalities in areas where the public section can play a special role in addressing it. The two series have adapted different approaches: relative income poverty in rich countries for the Report Card (under the assumption that ‘basic needs’ are met), and absolute poverty in the Social Monitor which considers the CEE/CIS region. Each explicitly acknowledge the limitations of the approach in providing a full picture of the reality of children living in poverty and of the challenges confronting the realization of their rights.

Efforts to adapt a broader concept of child poverty have run into methodological and operational issues caused by lack of data which often leads to a very general level of deprivation indicators and sketches gross barriers to the realization of children’s rights but may be less telling in terms of capturing the interplay between areas of deprivation and disparities among regions within countries.

Based on considerable information and experience gathered for the SM06 on linking absolute income poverty with deprivations, the Centre has been able to support Country Offices with information on opportunities and limitations in using existing (international) micro/household survey instruments to assessing the covariance between income poverty and deprivations. The material, which will be released as an Innocenti Working Paper has the potential to inform the development of Situation Analysis, and of methodologies for assessing child poverty.

This will also inform IRC organized studies in a selection of lower and upper middle income countries to understand child income poverty and associated deprivations, as well as factors hampering the fulfillment of the rights of children in poverty in terms of public policies, social exclusion etc. It will be complemented with data from other sources, including the UNICEF Multiple Cluster Indicator Survey and the most recent DHS.

The dynamic dimensions in the short term (transitory poverty) or the much longer term (intergenerational transmission) will be considered, together with the role of public policies and transfers in mitigating adverse impact on the enjoyment of children’s rights. This analysis is expected to shed light in these areas and contribute to the medium to long term policy formulation. 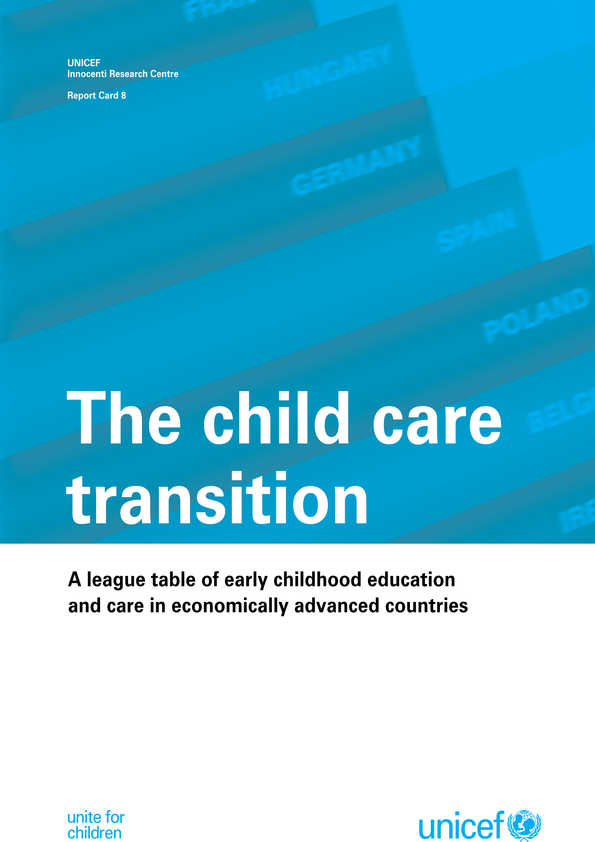 A great change is coming over childhood in the world's richest countries. Today's rising generation is the first in which a majority are spending a large part of early childhood in some form of out-of-home child care. At the same time, neuroscientific research is demonstrating that loving, stable, secure, and stimulating relationships with caregivers in the earliest months and years of life are critical for every aspect of a child’s development. Taken together, these two developments confront public and policymakers in OECD countries with urgent questions. Whether the child care transition will represent an advance or a setback for today's children and tomorrow's world will depend on the response.
Read the publication 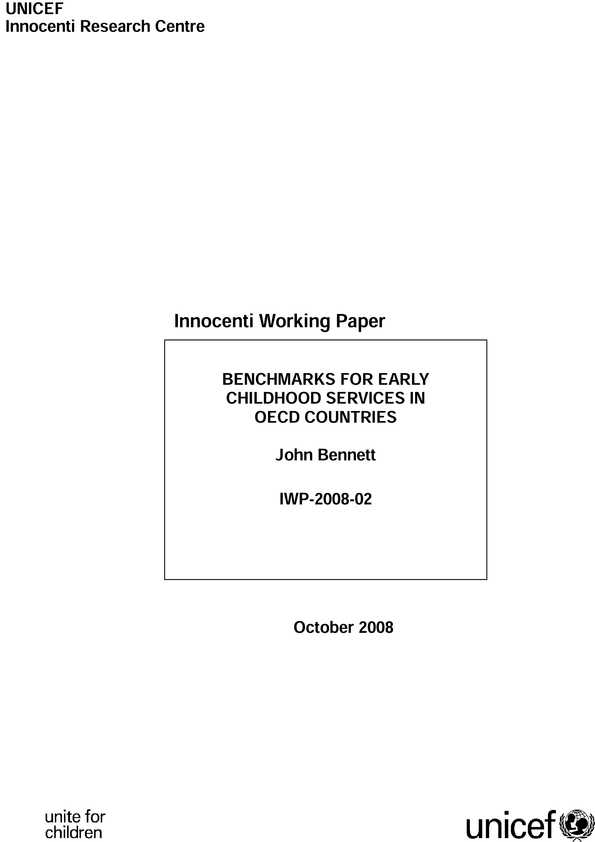 The Innocenti Report Card 8 presents ten benchmarks for early childhood services. It represent a bold first step towards the ultimate goal of improving the lives of young children by enabling international comparisons to be made in the early childhood field, thereby encouraging countries to learn from each other’s experiences. The current paper provides some critical reflections on the challenges involved in establishing the principle of standard-setting in the early childhood field and suggests factors that should command our attention as the principle - as is hoped - becomes established and the process of standard-setting matures.
Read the publication 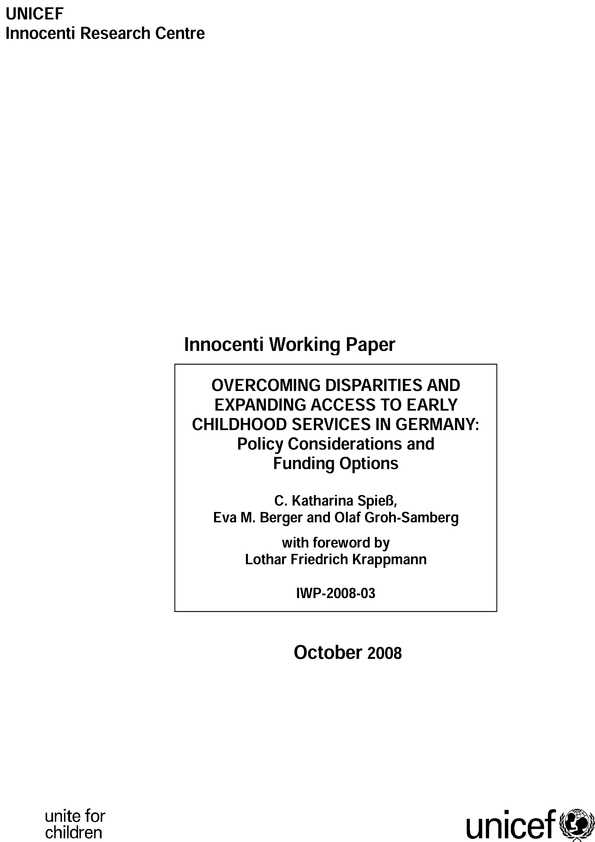 In comparison to the Early Childhood Education and Care (ECEC) systems of many other advanced economies the German system can be characterised as relatively uniform, when looking at programmes and providers. But in other ways, there are considerable variations. There are considerable regional differences in governance, funding, and attendance rates, in particular with respect to certain socio-economic groups. This paper describes and evaluates these differences, mainly from an economic perspective and also taking child well-being into account.
Read the publication 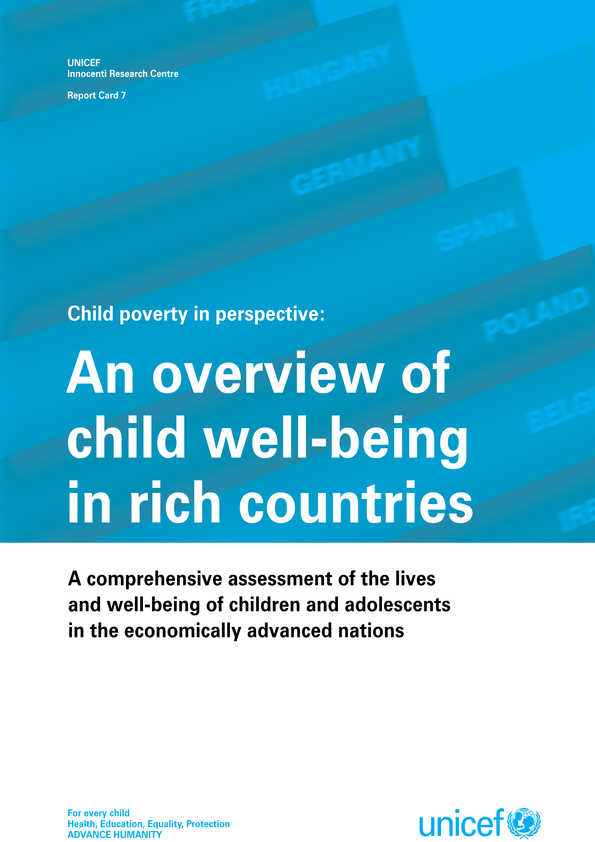 Child Poverty in Perspective: An overview of child well-being in rich countries

This report builds and expands upon the analyses of Report Card No. 6 which considered relative income poverty affecting children and policies to mitigate it. Report Card 7 provides a pioneering, comprehensive picture of child well being through the consideration of six dimensions: material well-being, health and safety, education, family and peer relationships, subjective well-being, behaviours and lifestyles informed by the Convention on the Rights of the Child and relevant academic literature.
Read the publication 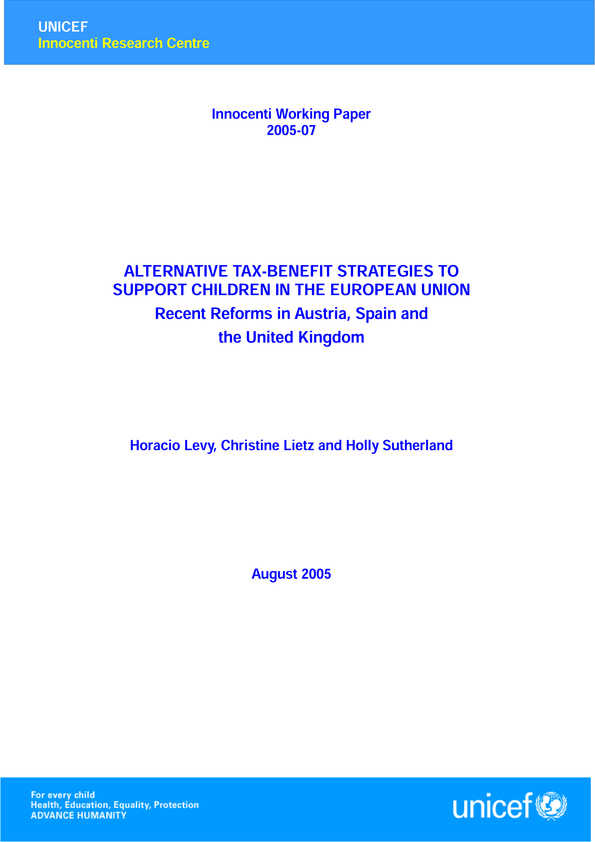 Alternative Tax-benefit Strategies to Support Children in the European Union. Recent Reforms in Austria, Spain and the United Kingdom

In this paper the situation of three EU countries that have recently experienced substantial but very different reforms of their systems to support families with children is analysed and compared: Austria, Spain and the United Kingdom. The structure of these systems is very different: Austria gives emphasis to universal benefits, Spain to tax concessions and the United Kingdom to means-tested benefits. Basically, the recent reforms have reinforced these structures in each country while increasing the amount of public resources directed towards children. However, are the chosen strategies the most adequate for each country? What would have happened to the economic well-being of children if instead of reinforcing the existing types of policies these countries had completely transformed the architecture of their systems in another direction? More concretely, what would be the effect on child poverty and on income distribution?
Read the publication 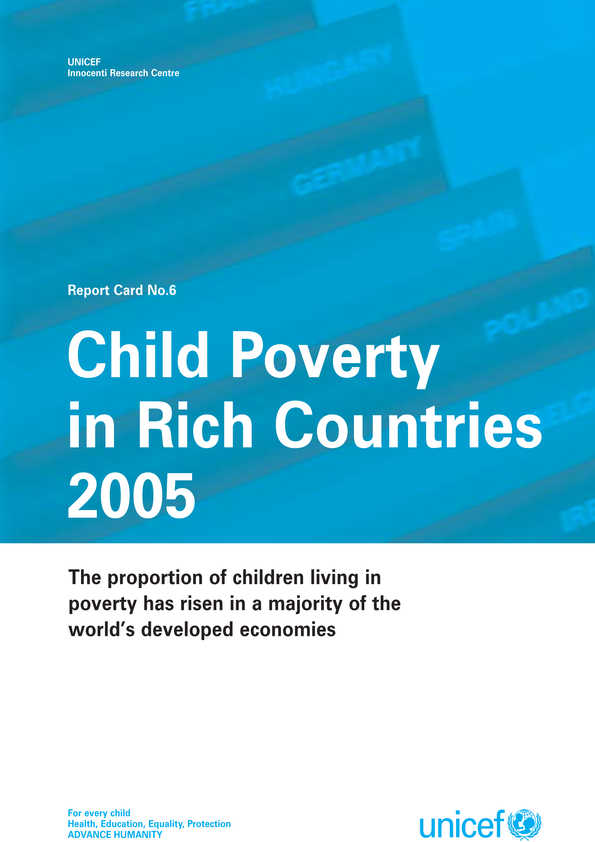 The proportion of children living in poverty has risen in a majority of the world's developed economies. No matter which of the commonly-used poverty measures is applied, the situation of children is seen to have deteriorated over the last decade. This publication is the sixth in a series of Innocenti Report Cards designed to monitor and compare the performance of the OECD countries in meeting the needs of their children.
Read the publication 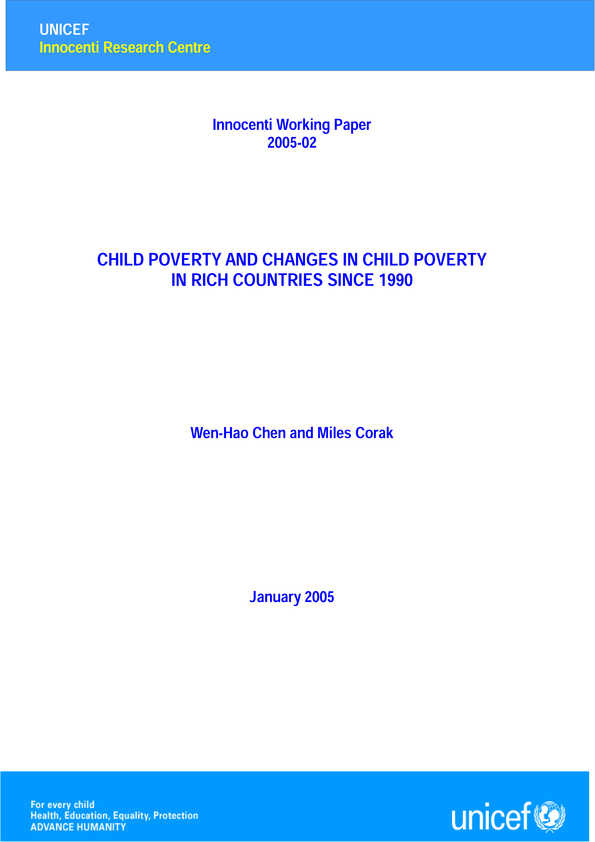 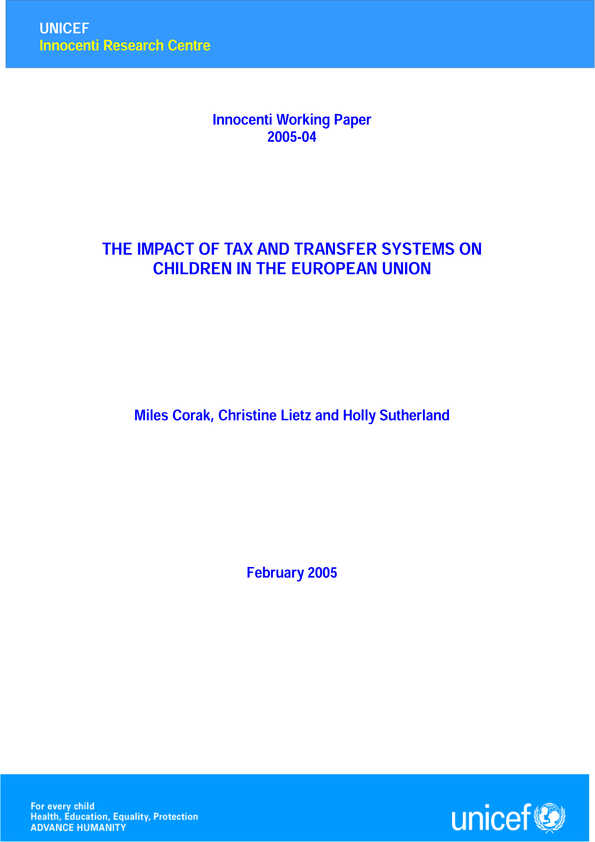 The objective of this paper is to analyse the impact of fiscal policy on the economic resources available to children, and on the child poverty rate. A static microsimulation model specifically designed for the purposes of comparative fiscal analysis in the European Union, EUROMOD, is used to study the age incidence of government taxes and transfers in 2001 in 15 EU countries.
Read the publication 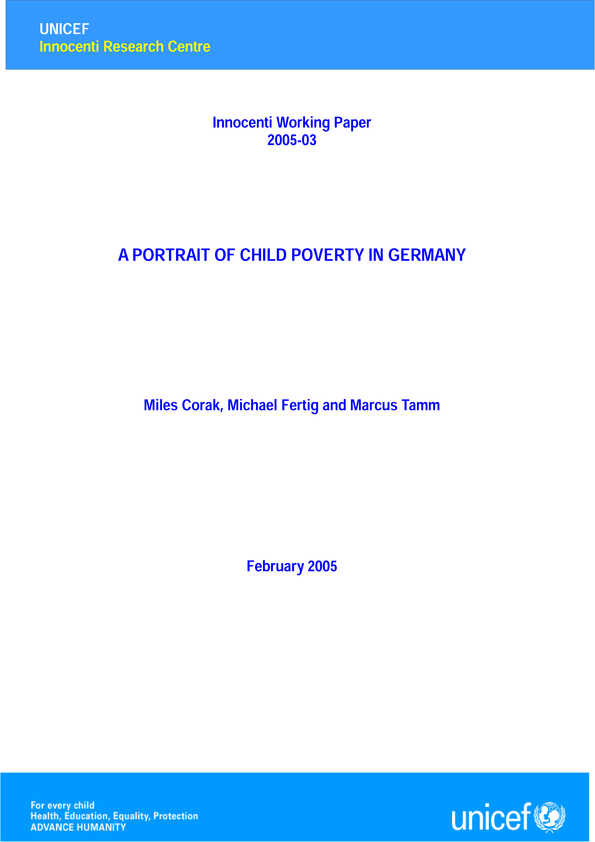 A Portrait of Child Poverty in Germany

This paper offers a descriptive portrait of income poverty among children in Germany between the early 1980s and 2001, with a focus on developments since unification in 1991. Data from the German Socio-Economic Panel are used to estimate poverty rates, rates of entry to and exit from poverty, and the duration of time spent in and out of poverty. The analysis focuses upon comparisons between East and West Germany, by family structure, and citizenship status.
Read the publication 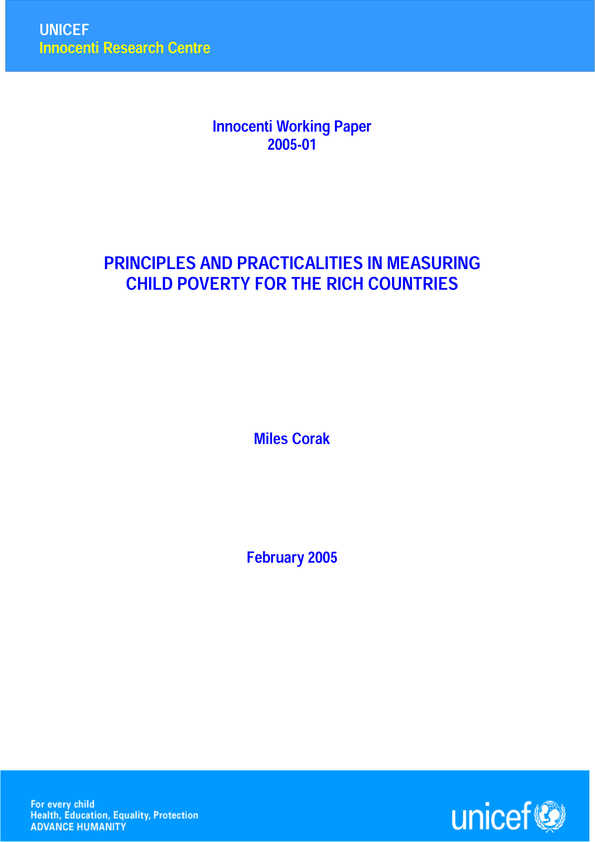 Principles and Practicalities in Measuring Child Poverty for the Rich Countries

This paper has three objectives. The first is to discuss the major issues involved in defining and measuring child poverty. The choices that must be made are clarified and a set of six principles to serve as a guide for public policy is proposed. The second objective is to take stock of child poverty and changes in child poverty in the majority of OECD countries since about 1990 when the Convention on the Rights of the Child came into force. Finally, the third objective is to formulate a number of suggestions for setting credible targets for the elimination of child poverty in the rich countries. This involves the development of appropriate and timely information sources as well as the clarification of feasible targets that may vary across the OECD.
Read the publication 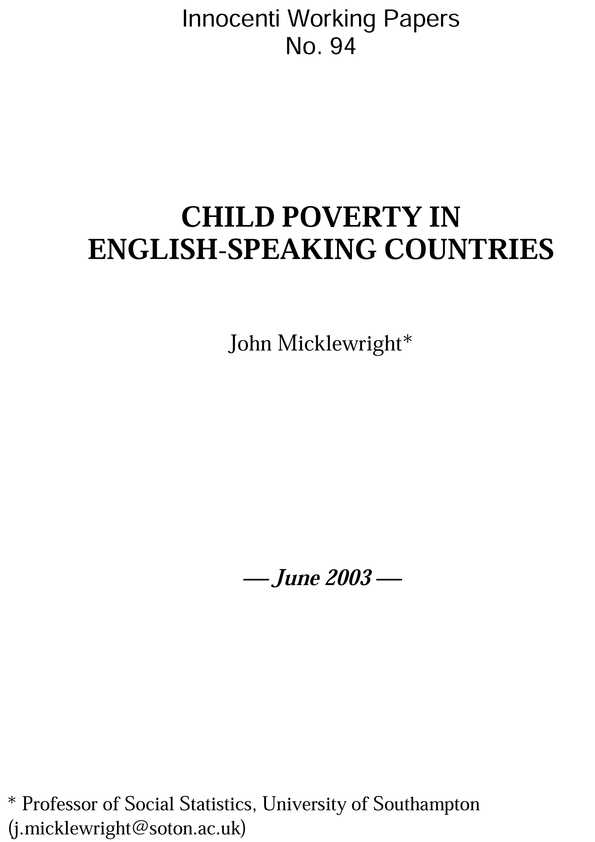 The paper considers child poverty in rich English-speaking countries - U.S., Canada, Australia, New Zealand, the U.K. and Ireland. It is sometimes assumed that these countries stand out from other OECD countries for their levels of child poverty. The paper looks at the policies they have adopted to address the problem.
Read the publication 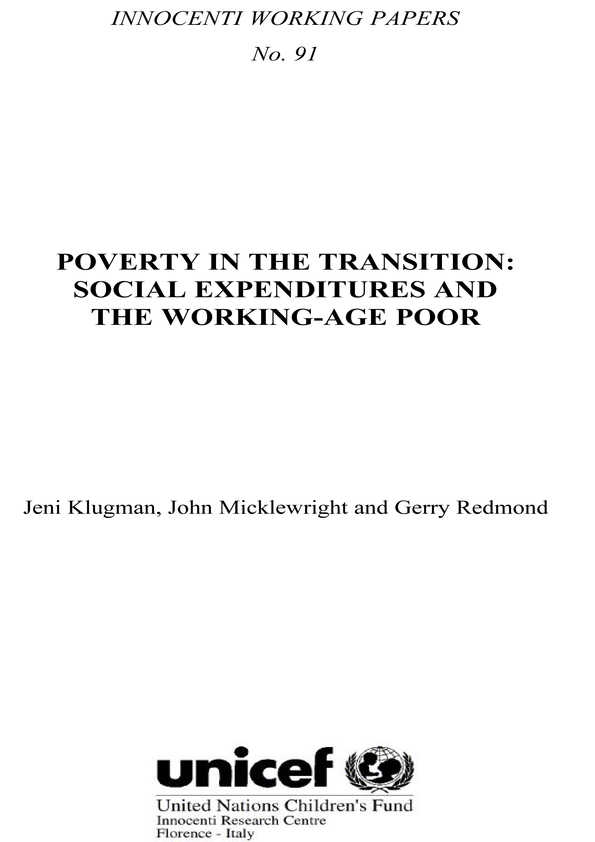 Poverty in the Transition: Social expenditures and the working-age poor

A combination of economic growth and committed revenue-raising should give most governments in Central and Eastern Europe and the former Soviet Union considerable scope to devote increased resources to tackling poverty. We review the extent and nature of poverty across the transition countries, emphasising the phenomenon of the working-age poor. We consider governments' fiscal positions and revenue raising tools, including the issue of whether some countries now have levels of external debt servicing that are so high as to hamper social sector expenditures.
Read the publication 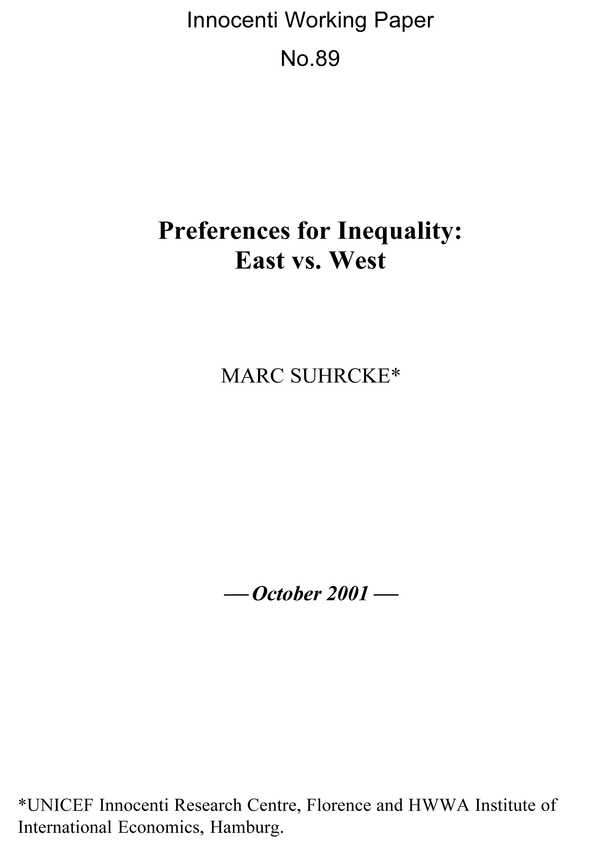 Preferences for Inequality: East vs. West

Do preferences for income inequality differ systematically between the post-socialist countries of Central and Eastern Europe and the Western established market economies? This paper analyses 1999 data from a large international survey to address this question. In particular, we examine whether attitudes to inequality differ between East and West even after the 'conventional' determinants of attitudes are controlled for. Results suggest that this is indeed the case.
Read the publication 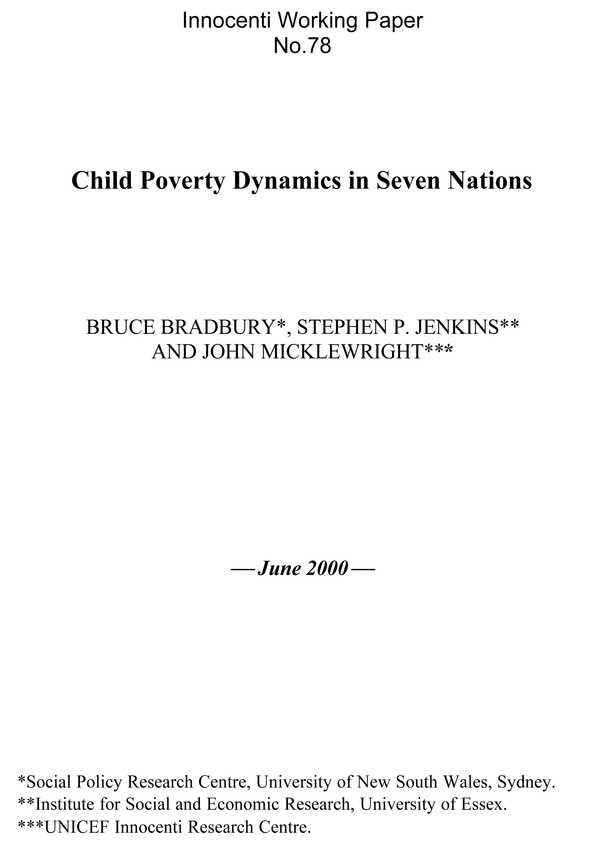 This paper compares child poverty dynamics cross-nationally using panel data from seven nations: the USA, Britain, Germany, Ireland, Spain, Hungary, and Russia. As well as using standard relative poverty definitions the paper examines flows into and out of the poorest fifth of the children's income distribution.
Read the publication 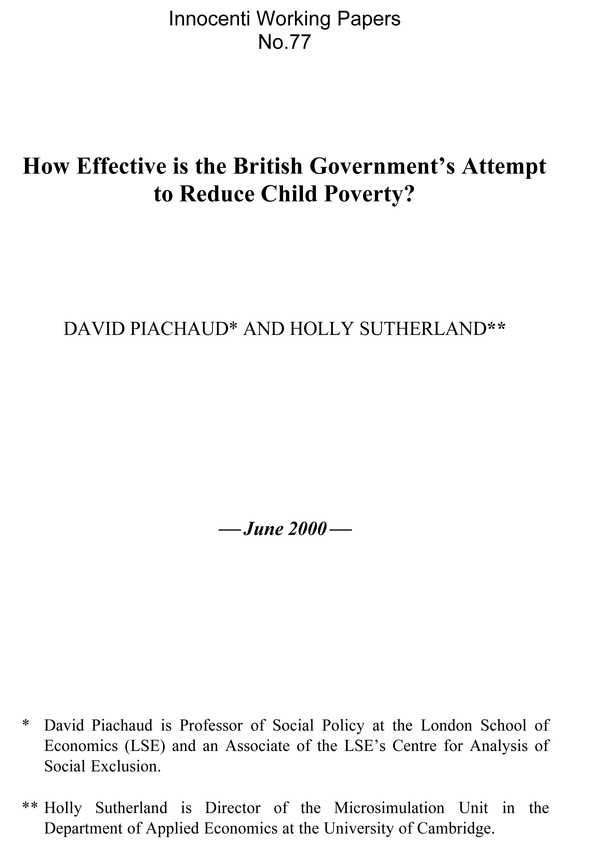 How Effective is the British Government's Attempt to Reduce Child Poverty?

This paper describes the specific initiatives of the British Labour government to reduce child poverty and evaluates their potential impact. The extent of the problem of child poverty is set out, the causes are discussed and Britain’s problem is set in an international perspective. Policies that address long-term disadvantage are also discussed and future strategy is considered.
Read the publication 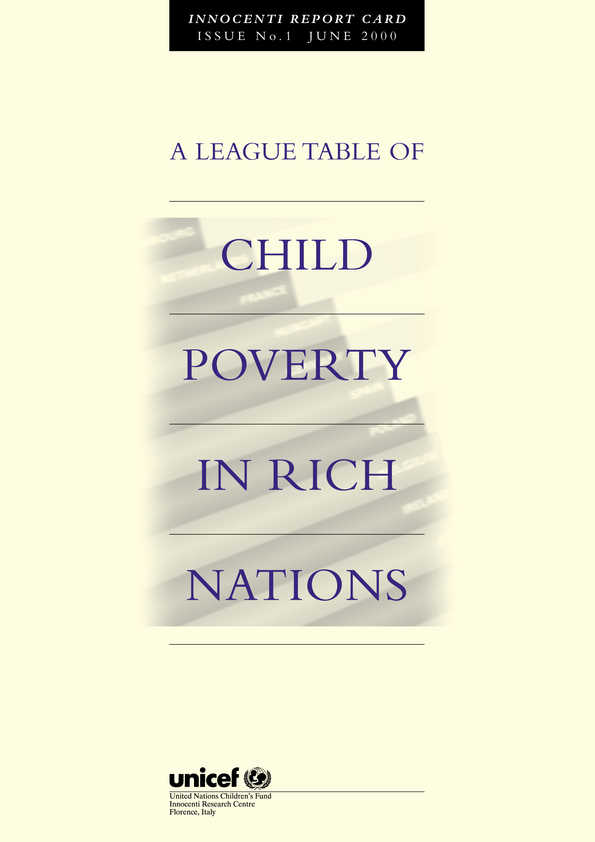 A League Table of Child Poverty in Rich Nations

The persistence of child poverty in rich countries undermines both equality of opportunity and commonality of values. It therefore confronts the industrialized world with a test both of its ideals and of its capacity to resolve many of its most intractable social problems. This new research asks what can be learned about the causes of child poverty and examines the policies that have contributed to the success of lower rates in some countries.
Read the publication 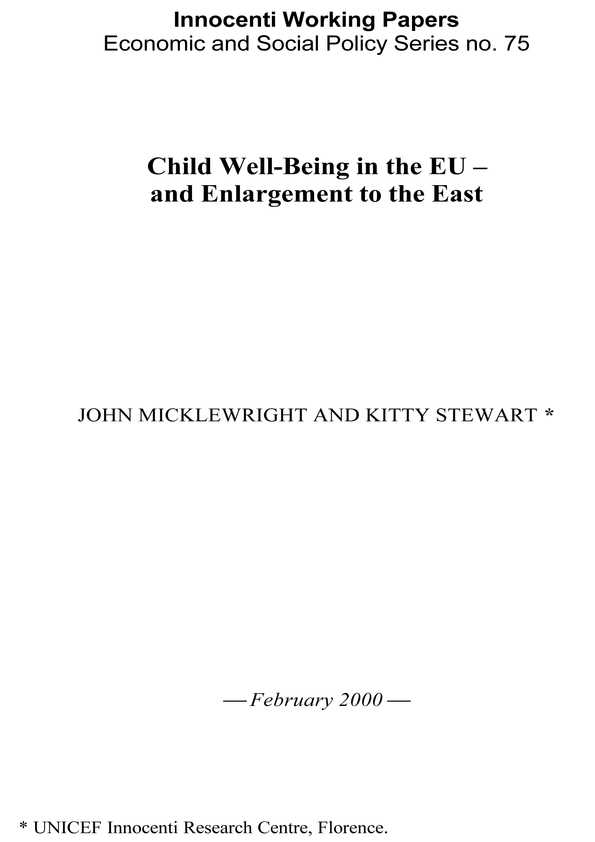 Child Well-Being in the EU and Enlargement to the East

The accession of up to 13 new members in the next decade is the most important development now facing the European Union. This paper analyses measurable differences in the well-being of children between current club members, the EU Member States, and the 10 Central and Eastern European applicants seeking admission.
Read the publication 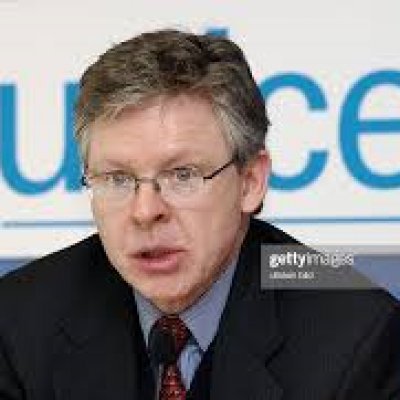