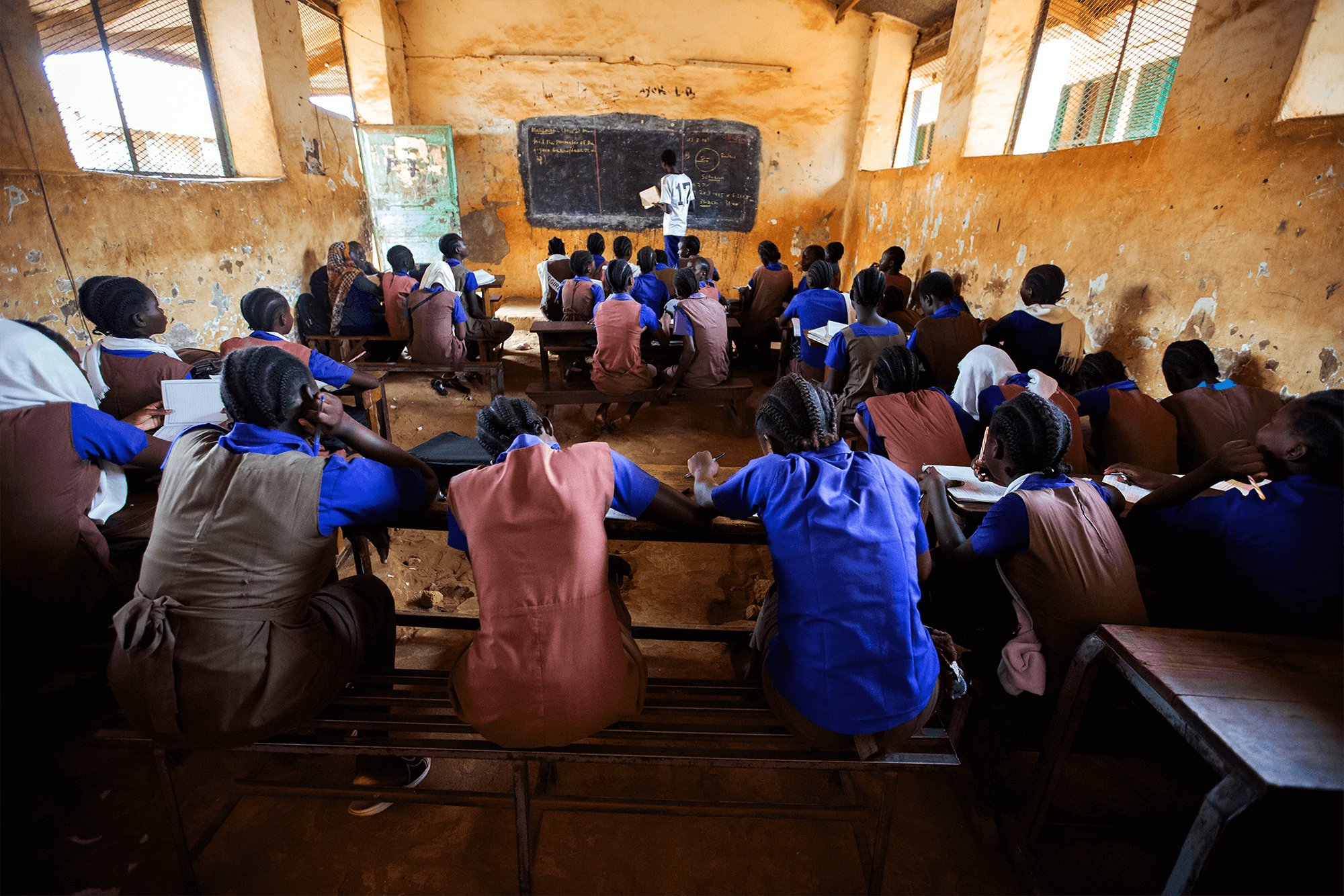 Teacher attendance and time on task in Eastern and Southern Africa 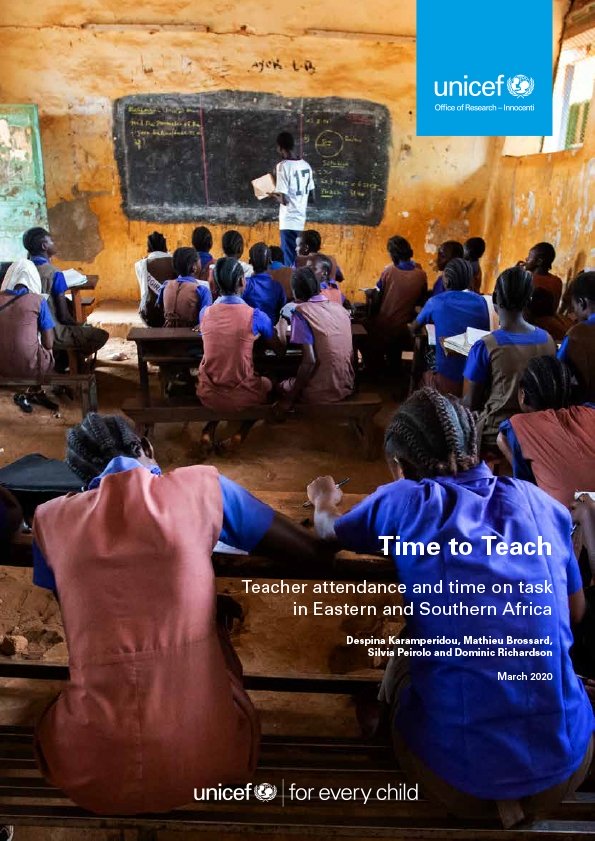 Teacher attendance and time on task in Eastern and Southern Africa

Quality education starts with teachers: they must be present and engaged for learning to take place. But according to recent evidence, in certain parts of sub-Saharan Africa, teacher attendance rates remain alarmingly low. When students are without teachers – an essential prerequisite to learning – they are less likely to meet foundational numeracy and literacy goals. Available data from 21 African countries shows that, on average, 87 per cent of students are unable to read and understand a simple text by the end of primary school age. This alarming statistic is reflective of a complex set of contributing factors, but also highlights the need to address one of the most critical ones: teacher attendance.

Low teacher attendance and reduced time on task not only short-changes students, but it also wastes valuable financial resources and is one of the most cumbersome obstacles on the path toward the education Sustainable Development Goal and to the related vision of the UNICEF education strategy: Every Child Learns.

Time to Teach (TTT) covers Comoros, Kenya, Mozambique, Puntland (State of Somalia), Rwanda, South Sudan, Tanzania (mainland and Zanzibar) and Uganda. Its primary objective is to identify factors affecting various forms of teacher attendance, which include: 1) being at school, 2) being punctual, 3) being in the classroom, and 4) teaching when in the classroom and use this evidence to inform the design and implementation of teacher policies. The study draws from qualitative data collection, capturing the voices of teachers and other system-wide education stakeholders, from across the national, sub-national, community and school level; it also analyzes quantitative survey responses of teachers working in 180 purposively selected primary schools (20 schools per country/territory). 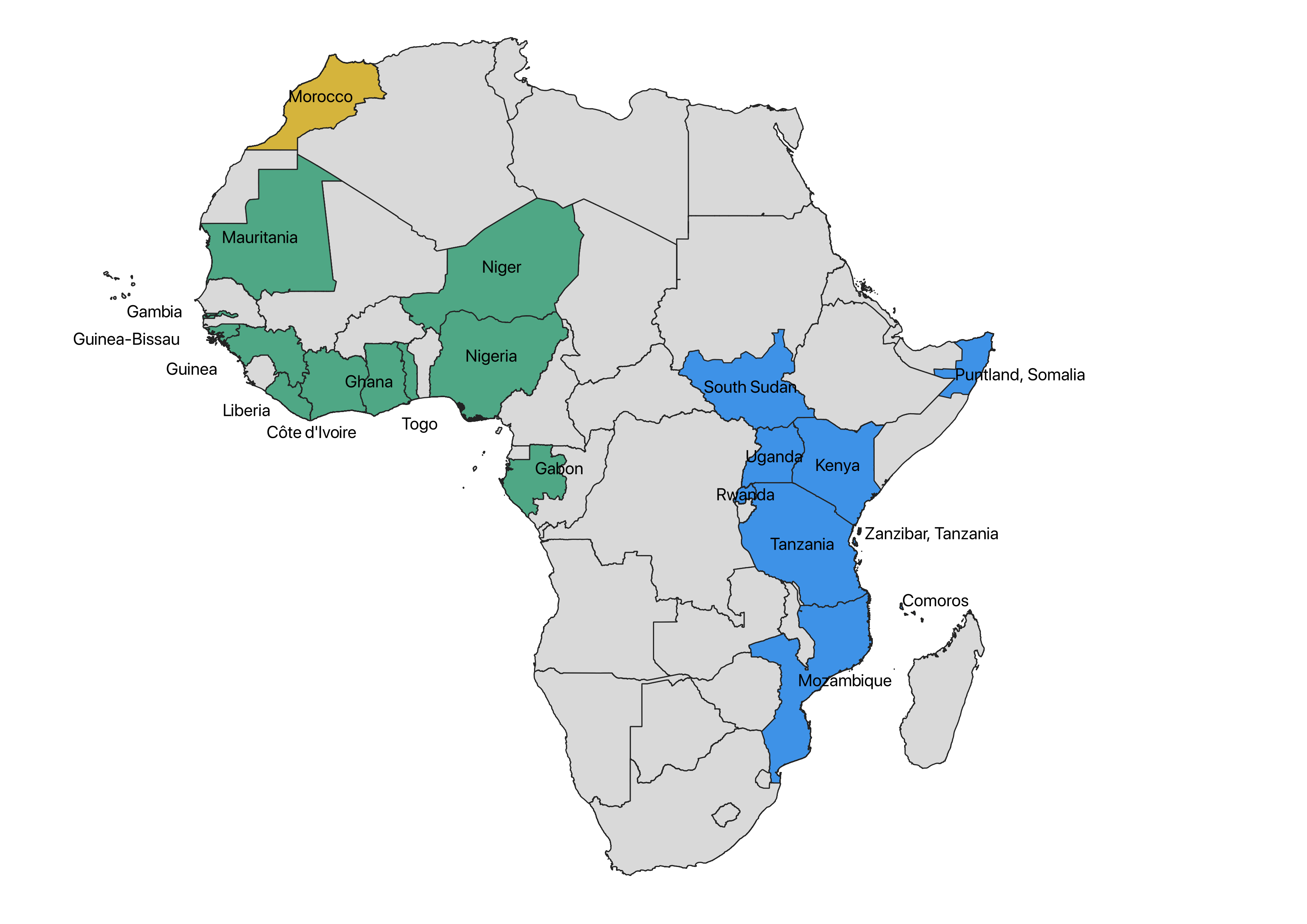 The Time to Teach study continues to be conducted in other regions of Africa. The blue countries on this map represent the countries studied for the regional report in Eastern and Southern Africa.

Find out more about Time to Teach

The key objectives of the study were to:

The report aims to answer the following questions:

The study moves beyond the conventional definition of teacher attendance – that of being present at school – to include other, subtler forms of teacher attendance, like being punctual, being in the classroom (while in school), and teaching when in the classroom (see Box 1). While there are many valid reasons for a teacher to be absent, the study does not distinguish between authorized and unauthorized absences, as its goal is to capture the total loss of time on task (during the school year), irrespective of the validity of the teachers’ absences.

Download the report
Find out more about Time to Teach 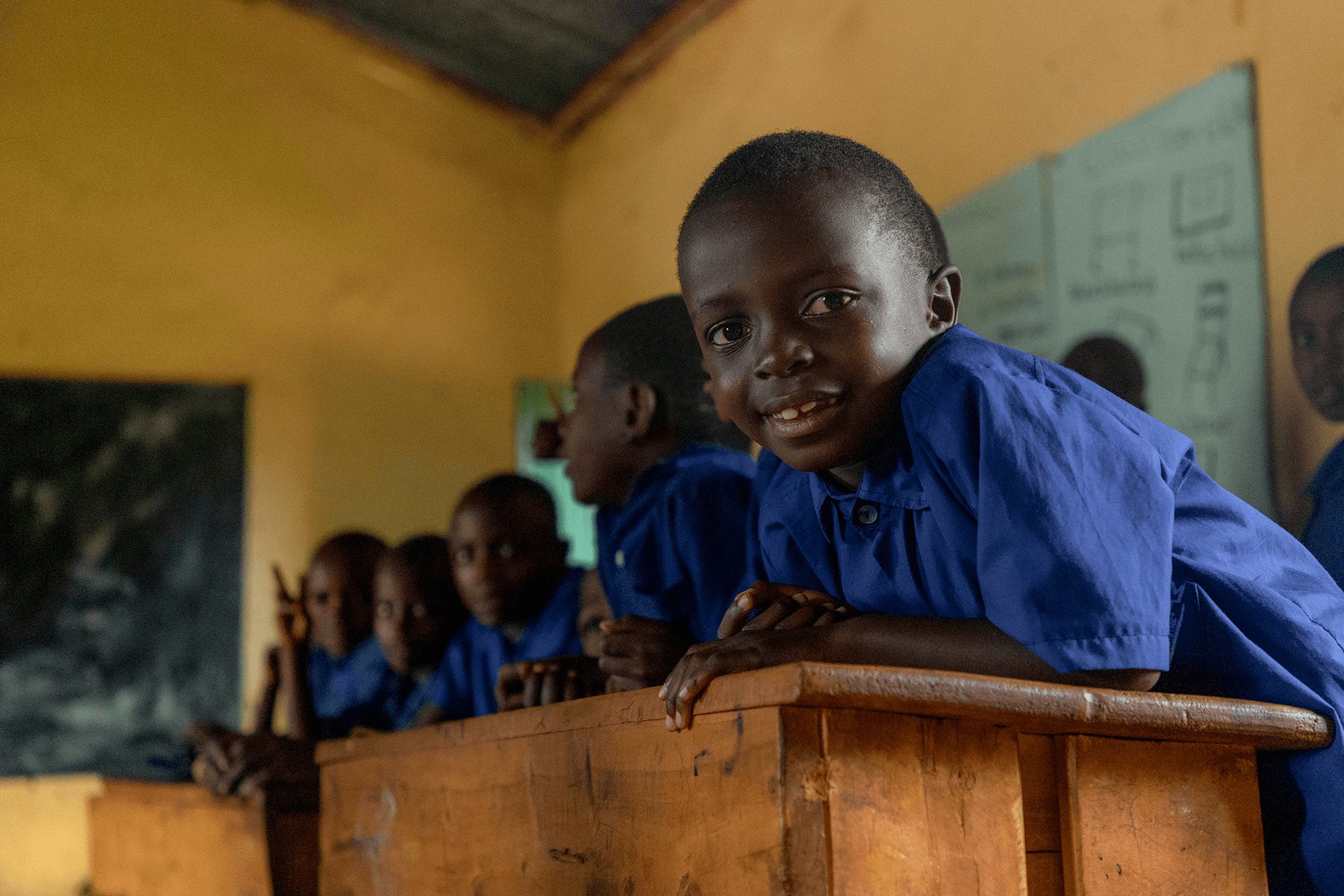 How frequently are teachers absent?

Confirming much of the existing literature, data drawn from the TTT survey – which was administered to 1,955 teachers working in 160 purposively selected schools across the ESA region – indicate that primary school educators are absent in various ways, albeit with varying degrees of frequency.

Almost 17 per cent of surveyed teachers reported arriving to school late or leaving school early on a frequent basis (i.e. once a week or more). Among participating countries, the highest national rates of late arrival/ early departure were reported in Uganda (25.7 per cent), South Sudan (23.7 per cent) and the Comoros (22 per cent) and the lowest in Puntland (5.3 per cent), and Kenya (8.9 per cent).

As much as 15.7 per cent of surveyed teachers reported missing lessons while at school at least once a week. Teachers in South Sudan and in Zanzibar reported the highest rates of classroom absenteeism (26 and 22.7 per cent respectively) and teachers in Rwanda and Kenya the lowest rates (7.6 and 8.4 per cent respectively). Absence from teaching, defined as reduced time on task while in the classroom, was reported by 17.8 per cent of surveyed teachers as occurring at least once a week.

At the country level, the largest percentages of teachers reporting spending less time on teaching than originally planned at a rate of once a week or more were in South Sudan (31 per cent) and Zanzibar (20.7 per cent) and the smallest in Puntland (11 per cent), Rwanda (12 per cent) and Kenya (12.1 per cent).

Which schools and teachers are more likely to experience absenteeism?

Analysis of the TTT survey data shows that differences in the frequency of self-reported absenteeism exist within countries and across school type and location, and teacher characteristics such as work status and level of education. The findings summarized below are those for which the differences are statistically significant.

School location: Across the region, absenteeism is higher in rural areas (18 per cent) than in urban/ peri-urban areas (15 per cent).

School governance: Overall, approximately 13 per cent of private schools across the countries are affected by teacher absenteeism compared with 17 per cent of public schools.

Gender: There is no statistically significant difference between male and female teacher self-reported absenteeism in the region as a whole.

Work status: In all countries, teacher absenteeism is higher among volunteer teachers (28 per cent) than non-volunteer (civil servant or contracted) teachers (16 per cent).

Why are teachers absent?

Overall, in the eight countries, ill health is the most frequent answer given for the absence from school, late arrival/early departure and reduced time on task forms, and the second most frequent answer given for absence from the classroom. Weather – in particular for late arrival/early departure – and family reasons were also very frequently mentioned. 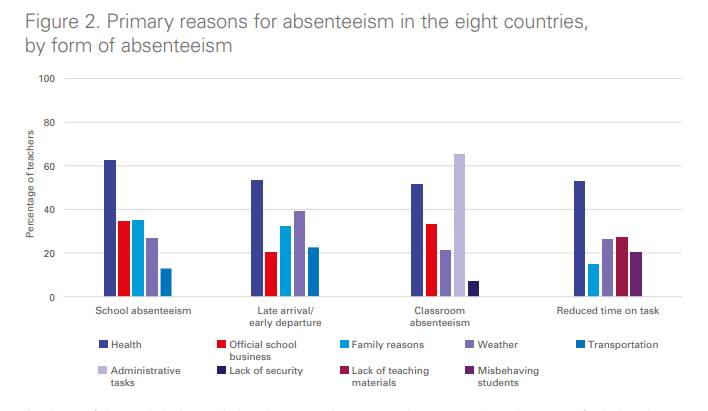 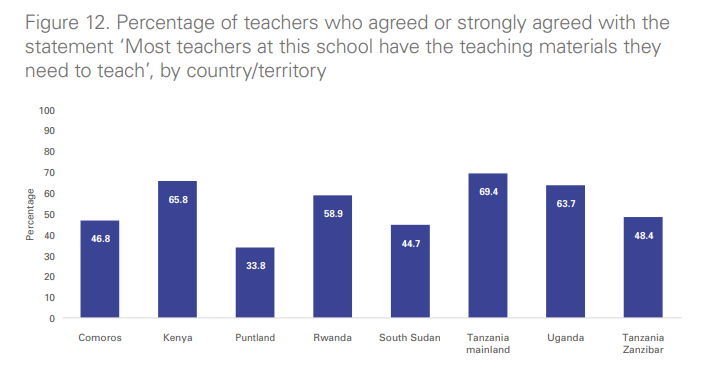 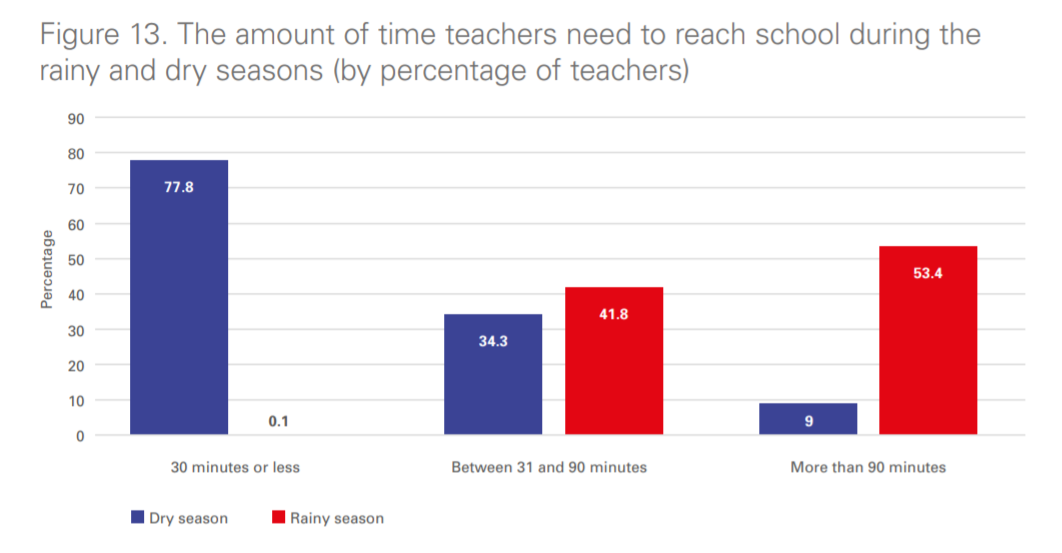 Download the report
Find out more about Time to Teach 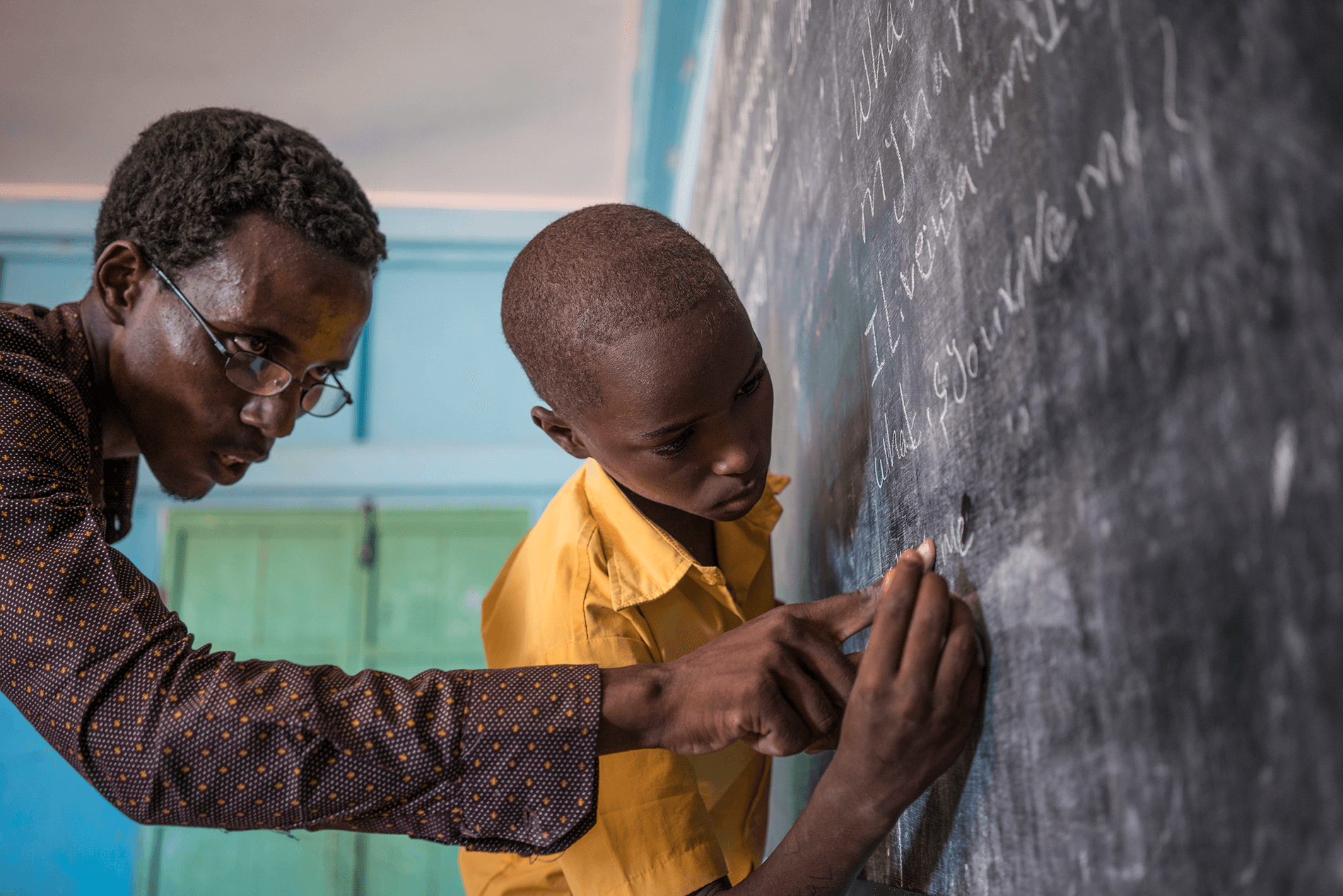 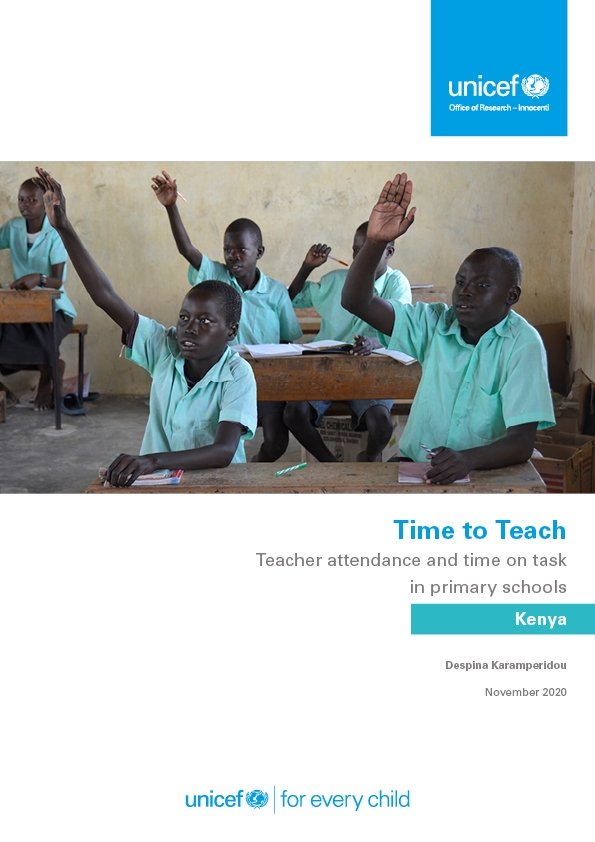 In Kenya, where primary education has made remarkable improvements in recent years, teacher absenteeism remains a foremost challenge for the education system. 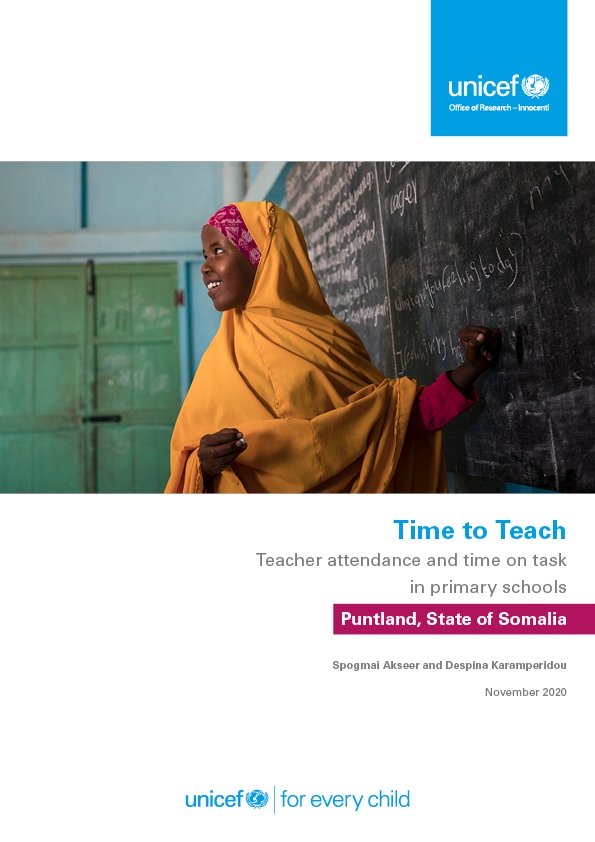 While there is no data available from Puntland, State of Somalia, on teacher absenteeism trends, regional cases suggest this is a chronic problem facing many schools throughout Africa, with an average of 15 to 45 per cent of all primary school teachers absent from the classroom on any given day. The Ministry of Education and Higher Education is beginning to increasingly prioritize the role of the teacher in the provision of effective time on task, and thus, has taken measures to deter teacher absenteeism. 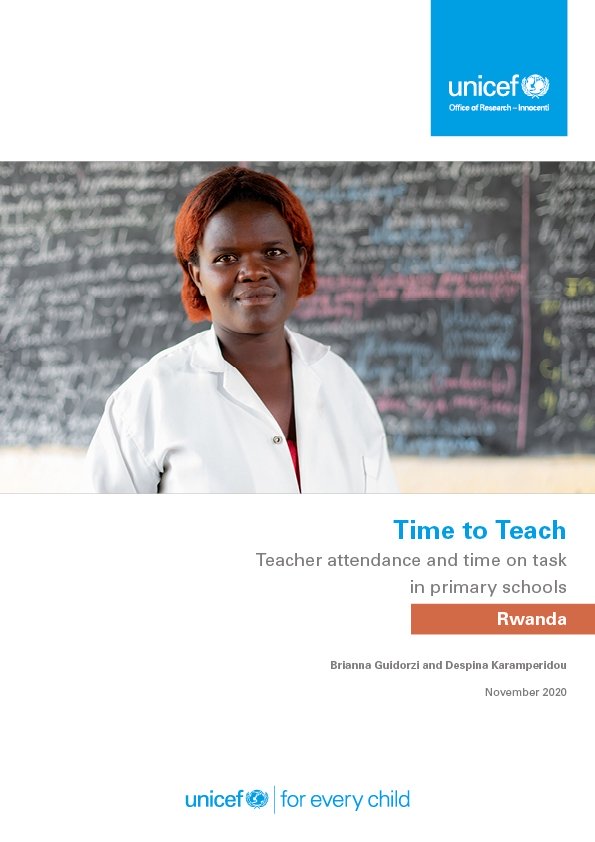 Rwanda has made significant progress since the universalisation of primary education school in 2003. It currently boasts one of the highest primary student enrolment rates in sub-Saharan Africa. Yet teacher absenteeism continues to be one of the most serious challenges and hinders provision of quality education in Rwandan primary schools. Teachers absenteeism is the main reason why many pupils and students in Rwanda lack foundational literacy, numeracy, and the socio-emotional skills and therefore cannot reach their full potential. While there may be many valid reasons for a teacher to be absent from school and classroom, not all reasons are legitimate. Some teachers, for example, do not come to work because they pursue other occupations elsewhere. 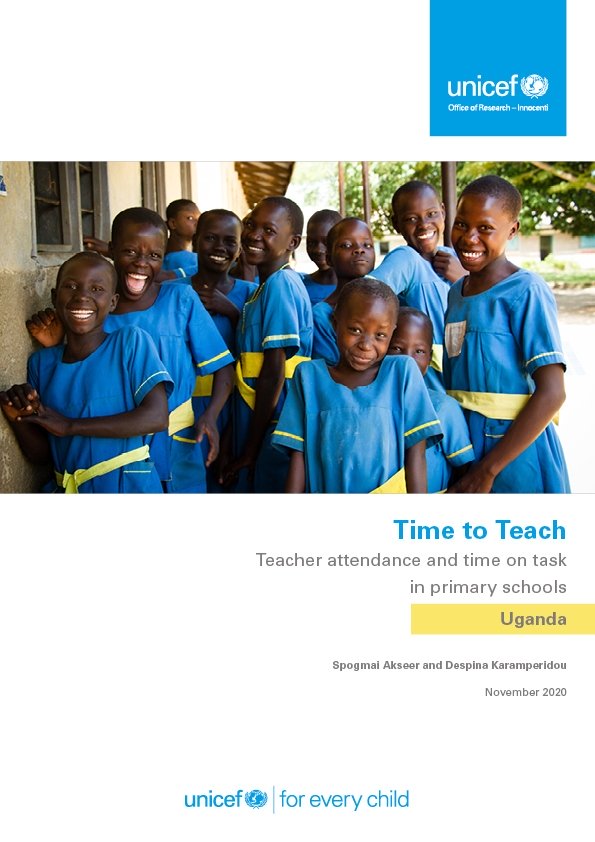 In Uganda, primary education has achieved several milestones resulting in significant gains, including over 90 per cent literacy rate throughout the different districts, 94 per cent of the teaching force trained, and ongoing commitment from the Ministry of Education and Sports towards enhancing the provision of education. Uganda has also achieved gender parity in primary school enrolments, which in 2016 was at 84.1 per cent for girls and 83.3 per cent for boys.

There are, however, ongoing challenges that put pressures on current gains and future goals. UNICEF Uganda estimates at least 60 per cent of Uganda's teachers are not present in the classroom at half of all public schools. Regional observations indicate teacher absence is a much larger issue in Uganda than other neighbouring countries, and that their subject knowledge is lower, comparatively. 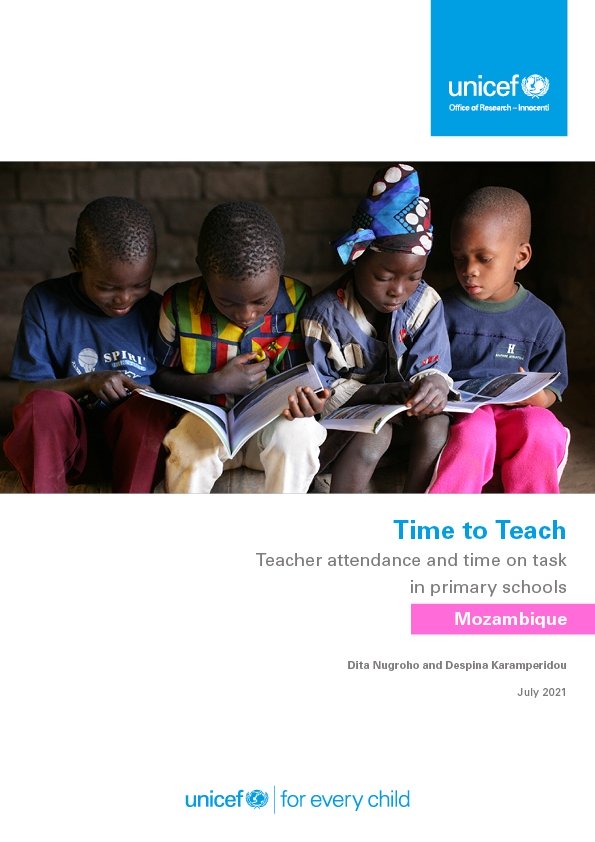 This Time to Teach study collates and strengthens the evidence base on primary school teacher absenteeism in Mozambique. The study uses a mix of qualitative and quantitative research methods to provide critical insights into the factors that underpin the multiple forms of teacher absenteeism and time on task. It also examines how factors vary across countries, school types, gender of teacher and other teacher characteristics. Despite high levels of teacher absenteeism, the study shows that teachers are generally committed and that what is needed is education system strengthening. It is hoped that findings will inform workable solutions and policies that will ensure a motivated teaching force, increase opportunities for children to learn at school and, ultimately, improve their life and work opportunities. 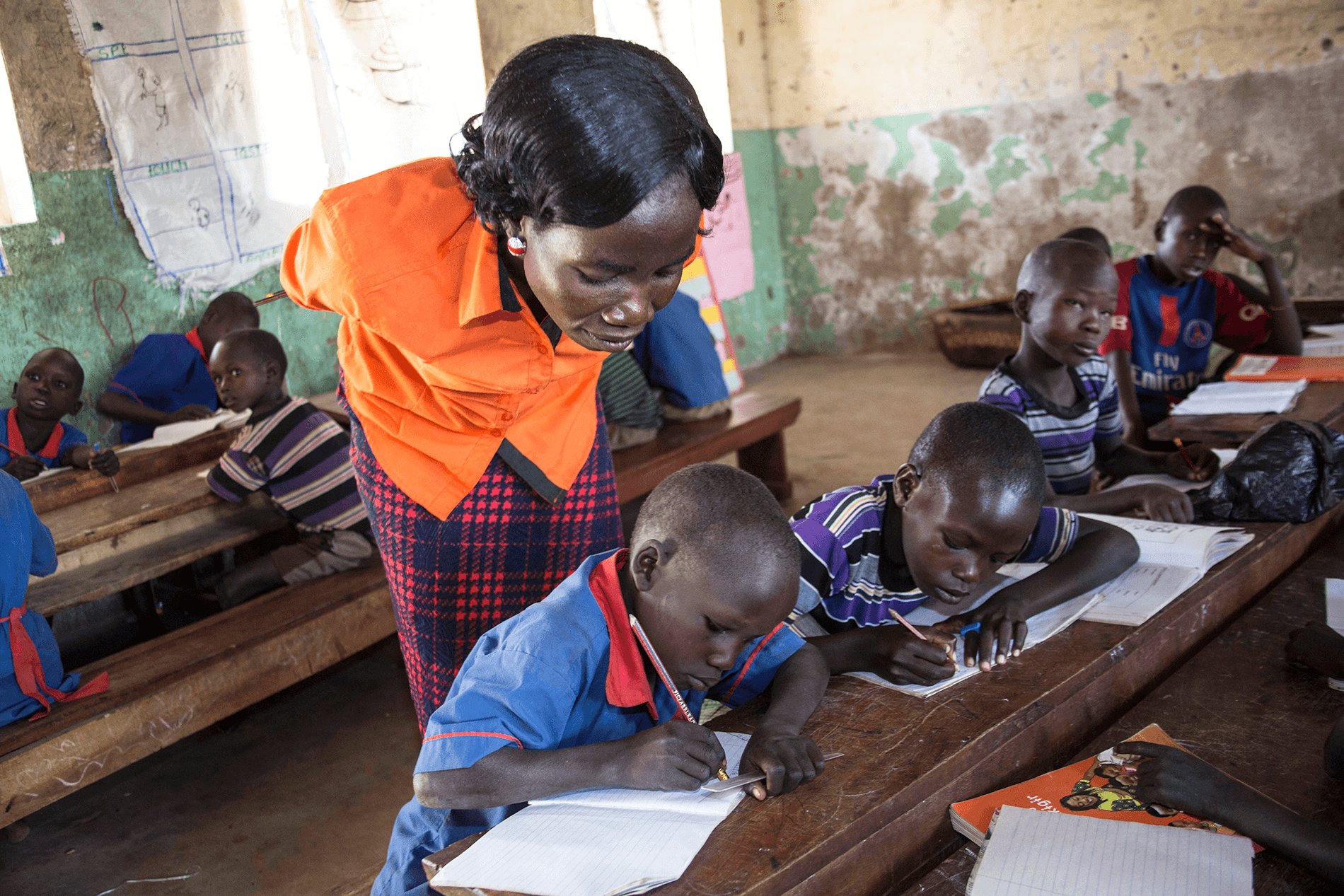 Insights from the field on promising practices – i.e. interventions by governments and development partners that may have the potential to bring about positive change and sustainably improve teacher attendance and time on task.

In most countries, there exists a framework for reporting, monitoring and sanctioning teacher absenteeism, especially absence from school, but its implementation is often problematic due to lack of capacity and resources. To encourage consistent enforcement of teacher monitoring and management mechanisms, it is important to: 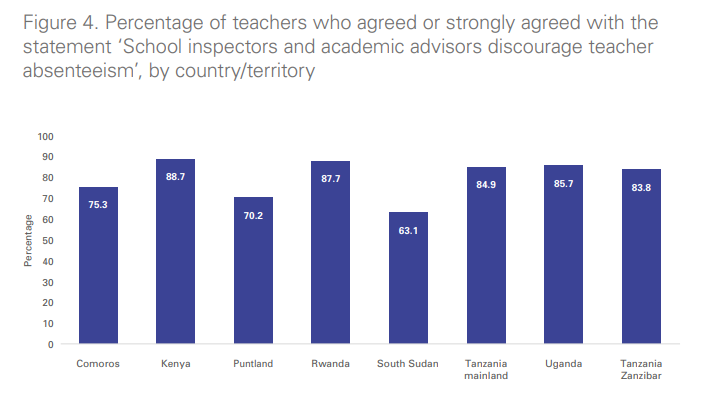 Collaboration between ministries of education, ministries of public works and transport, and local government is especially important, as poor infrastructure in the community limits teachers’ ability to carry out their duties. Special attention needs to be given to providing reliable transportation and functioning roads to improve teacher school attendance and discourage lateness. Ensuring decent housing conditions for teachers is also key for staffing schools in areas where housing options are limited or rental costs too high. Working in collaboration with parents and local communities on reinforcing school infrastructure (e.g. by replacing iron-sheet roofs) could help to reduce weather-induced classroom absenteeism and increase time on task.

Working in partnership with ministries of health is crucial for addressing inadequate health care and prevention programmes that affect teacher time on task. While malaria and HIV/AIDS are common causes of poor health among teachers in this study, their occurrence varies across districts and schools and therefore they require a needs-based approach. This involves working with development partners on establishing or scaling up school-based health programmes that are locally owned and incorporate some form of community involvement (to ensure sustainability). In areas affected by conflict, education and health ministries could work together to provide counselling services to teachers.

In countries facing security concerns, ministries of education could strengthen cooperation with police and security forces, civil society organizations, and local communities to increase the number of guards stationed at schools. Guards and escorts, who accompany teachers to and from school, have been used to encourage teacher school attendance in many conflict-affected settings with some success.

Ministries of education could also work with line ministries and development partners to improve school safety infrastructure, including by building boundary walls and installing safety and security equipment. However, it is important that efforts to strengthen school security do not ‘militarize’ schools or give them an intimidating appearance, as this could further reduce teacher attendance.

Promising avenues for further research, which governments, development partners and researchers may consider, include the following:

Find out more about Time to Teach